It has been well over a year since the last major multiplayer addition to Company of Heroes 2, and one would be forgiven for thinking that given the base game is over two years old at this point, the developers have moved on to their next project. This is not the case however as Relic Entertainment have seen fit to add a fifth faction to the ongoing war that is the Company of Heroes 2 multiplayer scene. The newest arrivals on the battlefield are the British Forces, who were also present in the first Company of Heroes, however in a very different form. The new faction is arguably the most defensive, boasting a great variety of slow-moving tanks, artillery, and emplacements with their only relative weak point being a somewhat limited selection of infantry and lack of mobility. However it is the variety of choices one must make during each match played as the British that ultimately define the faction. 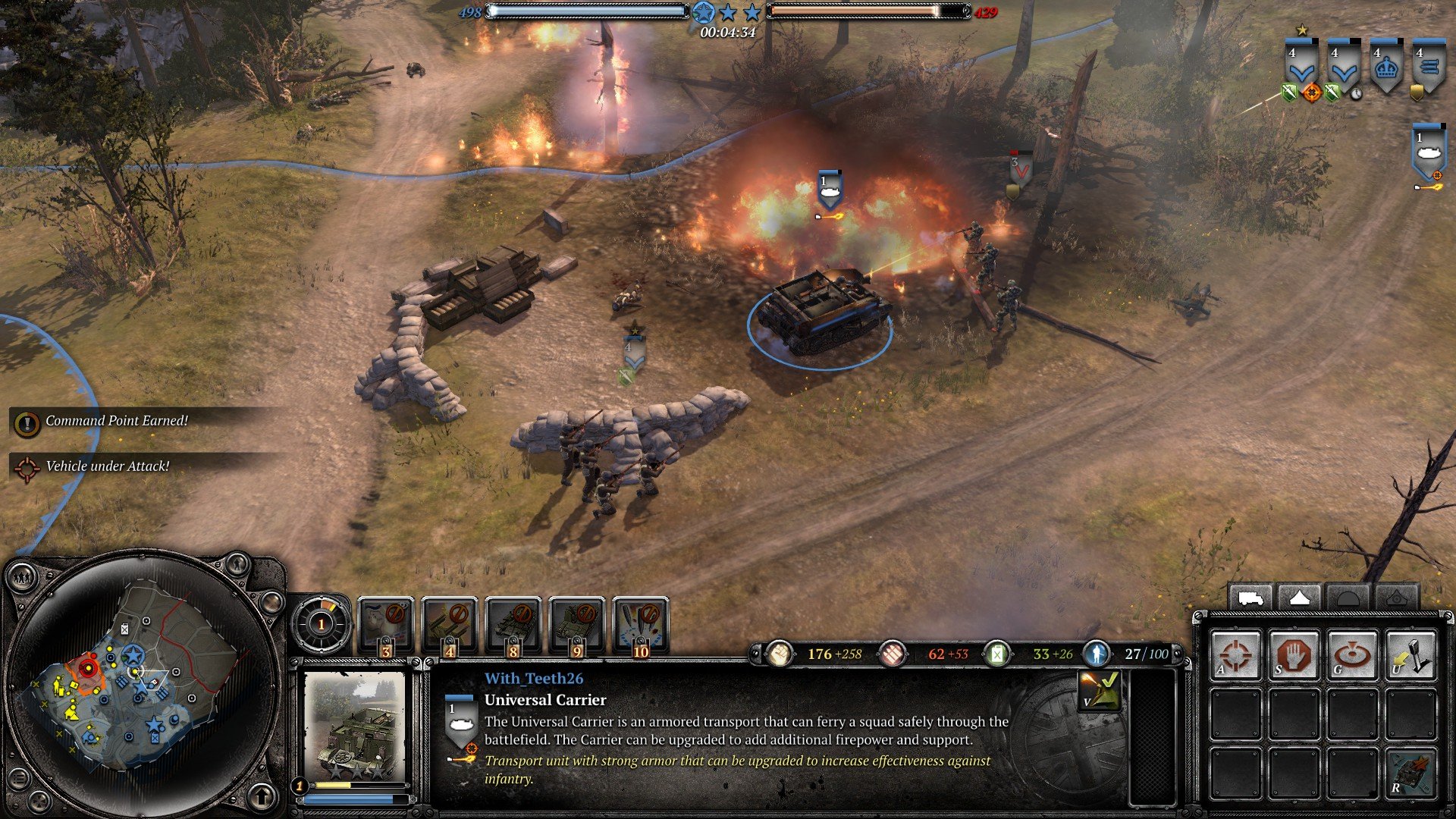 Having to make on-the-fly choices that will determine what units and abilities you will have access to in any given CoH 2 match is nothing new. In most standard multiplayer games it is rare to see an OKW, Wermacht or Soviet player build all of their available base structures; it is much more cost effective to build only some of them and spend the extra resources on units whose benefits are far more immediate on the battlefield. Choosing a commander with units that help fill in the gaps in your ranks left by the missing base structures is a typical strategy. The British are the first faction where you will probably build all of your base structures in every match, however that does not mean you don’t have any important choices to make when it comes to which units and abilities you want access to.

The choices begin once you establish the first base structure beyond the starting building. Right off the bat, you have to choose between an AA-emplacement that is great against infantry and light vehicles, or a surprisingly hard-hitting armored car that will give you early mobile anti-armor capabilities. Once you make your choice, the other unit will be unavailable to you. The standard infantry squads you get from the starting structure can be upgraded at this point as well; you can upgrade them to be medics or spotters. Medics can heal nearby troops when outside of combat with a free ability, while spotters can call in artillery strikes that make use of the artillery guns every British base has equipped.

The biggest choice you will make comes when you unlock your third and final base structure. You must choose between the “Hammer” and the “Anvil” doctrines, which will determine which heavy-tank you have access to, as well as a variety of other useful abilities. While granting access to one of two heavy-tanks for the British is the most obvious difference between the two doctrines, there are some other very useful abilities as well. The remaining upgrades and abilities are unlocked automatically once research for the doctrine is complete. These include some powerful items such as the destructive gammon bombs which infantry get to use, or the heavy engineer upgrade that makes the British sappers dangerous in close combat and extra fast at repairing vehicles. 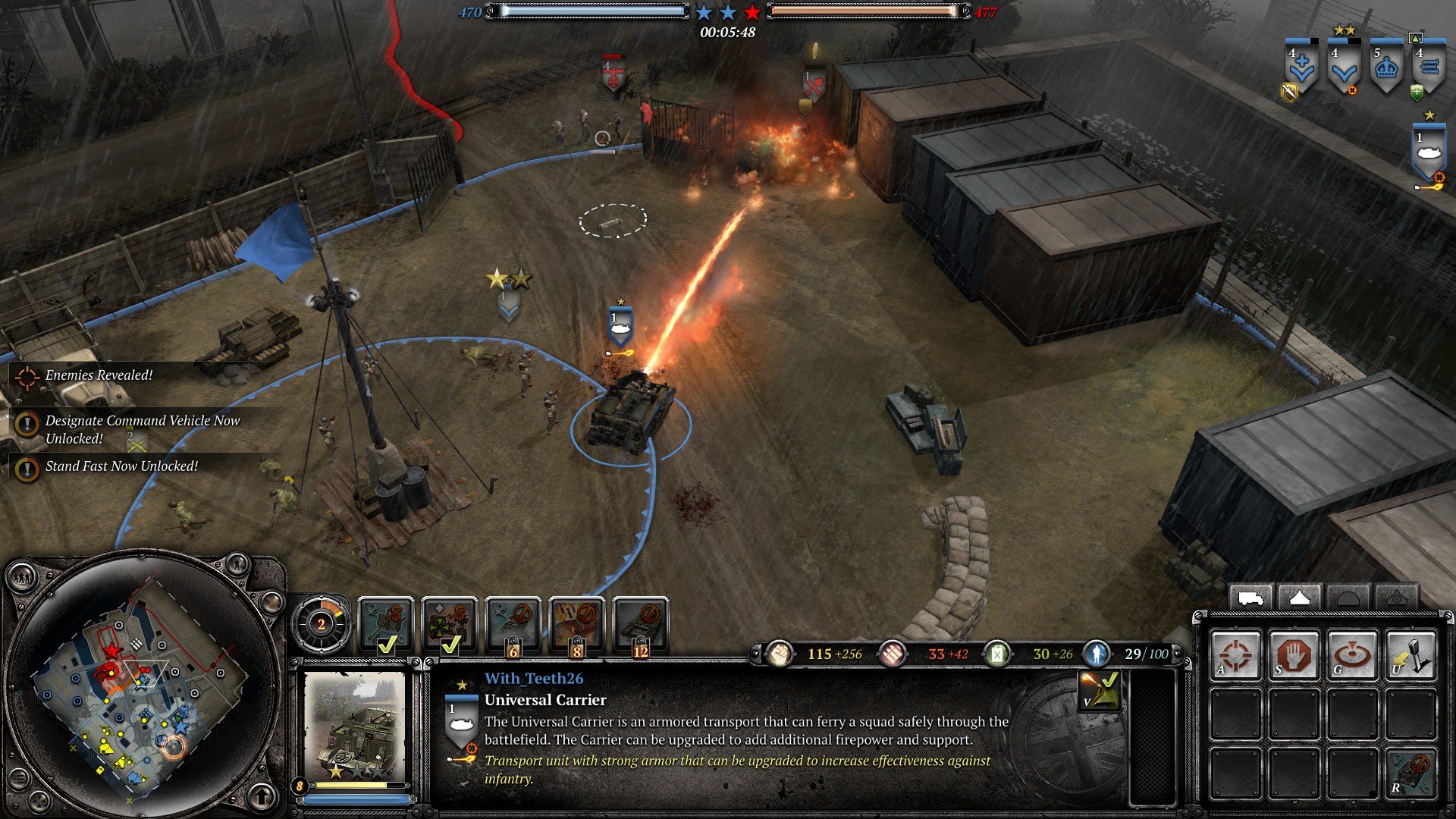 Regardless of what choices you make when maneuvering through a match as the British, you will have to embrace a fairly defensive style of play if you want to make the most of the faction. By default, you get access to a deadly mortar emplacement, and a more situational anti-armor emplacement that can spin in a 360-degree arc to fire on targets. You can also build a forward command post that lets you reinforce your troops and even equip special weapons like the Bren light machine gun and PIAT anti-tank grenade launcher. While you might think that their stationary nature gives them short life spans, structures can be braced which prevents them from firing but allows them to soak up a lot of damage for a period of time, giving you a chance to fend off the threat.

If you were disappointed by the lack of heavy armor that the U.S Forces have available, you will be glad to know that the Brits have access to a nice variety of heavy vehicles. The Firefly has the body of a Sherman, but packs a much bigger gun that can hurt even the toughest German armor, and can be upgraded with rockets that you fire manually and deal heavy damage to whatever they hit. The Comet tank is fairly quick and packs a punch, but is relatively fragile. The Churchill on the other hand is heavily armored, and while the base version has a rather unimpressive main cannon, some of the commander-specific variants mix things up; the Crocodile comes with a flamethrower that fires alongside the main cannon, while the AVRE fires a devastating mortar shell that obliterates anything it hits.

Aside from these fun tanks, the British commanders grant access to some powerful units and abilities. Some of the most destructive call-in artillery is found within commander specific call-ins, with the bombing run being the most awe-inspiring as it lays waste to a huge area of the map, though the bombers take a while to arrive giving the targets a chance to escape. One commander lets you call in commandos which arrive in a glider; these are fragile but versatile troops who can use the glider as a reinforcement point until it is destroyed. 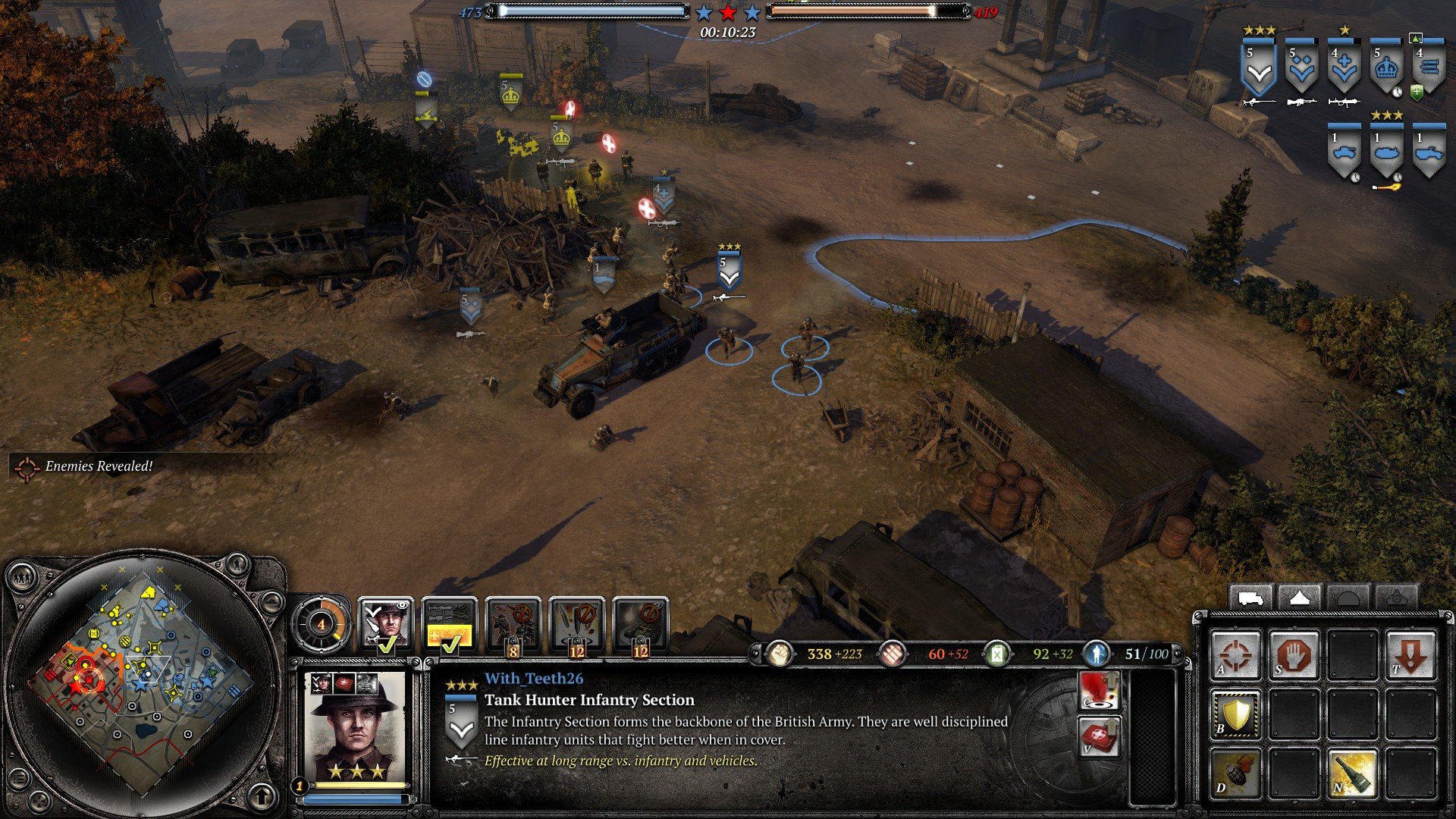 While you will need to fork over the asking price if you want to play as the Brits, all players will get access to the new maps that are being added with the expansion. While visually the new maps are a bit on the drab side, they are all well designed, with some featuring more than three victory points to mix things up. One map feels like a fairly large departure from anything else in the game, featuring five victory points, one of which is in a castle only accessible by infantry.

The British Forces update to Company of Heroes 2 is a good one, and the fact that you don’t need to worry about choosing which base-structures to build and the faction’s defensive design make them an ideal starting point for new players. The new units feel diverse and are fun to use, with a great variety of UK voice actors lending their vocal chords to give them a surprising amount of personality. While it is always difficult to comment on balance so soon after a new faction is introduced, I was able to win games as the British, and also beat them while playing against them as the Germans. It is hard to know how much longer Relic will continue producing new content for the aging strategy game, but for the time being the community is thriving and now is a great time for returning players to jump back in or for newcomers to give the increasingly massive RTS a try.

Our ratings for Company of Heroes 2: The British Forces on PC out of 100 (Ratings FAQ)
Presentation
75
The game is showing its age, with the new maps looking fairly drab, although the new units all have great voice acting and excellent sounds when firing.
Gameplay
86
The British are a lot of fun to play with fun choices to make every match and a lot of fun defensive structures and specialized tanks to play with.
Single Player
NR
None
Multiplayer
86
The multiplayer remains the strongest aspect of Company of Heroes 2; the British seem reasonably well balanced and the new maps are well laid out.
Performance
(Show PC Specs)
CPU: Intel i5-2500k @ 3.3ghz
GPU: Nvidia GTX 970 4GB
RAM: 8GB DDR3
OS: Windows 7 Ultimate 64 bit

75
No change on this front, online games are generally free of network lag however the frame rate can struggle when there is a lot of action on screen; some of the new British airstrikes are particularly problematic in this regard.
Overall
80
The Brits are another great addition to the Company of Heroes 2 multiplayer scene, and the community that has remained stable for the last two years should ensure a healthy lifespan going forward. 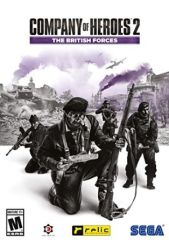 All videos for Company of Heroes 2: The British Forces (3)
Advertisement ▼