The last few years have seen a resurgence of both Diablo-esque Action RPGS and old-school CRPGs that have both found success among an audience who thirsted for such experiences after they seemed to vanish for years. Kyn, a game developed primarily by just two people, seeks to extract the tactical party-based combat found in games like Pillars of Eternity and marry it to the more loot and action-driven design of Diablo. You control a party of up to six characters in real-time combat as you complete a series of missions, with most of your time spent looting and fighting rather than reading. While developers Tangrin Entertainment get a lot of things right with Kyn, the number of bugs currently present in the game, and a few other niggling design issues, might give you pause before you jump in. 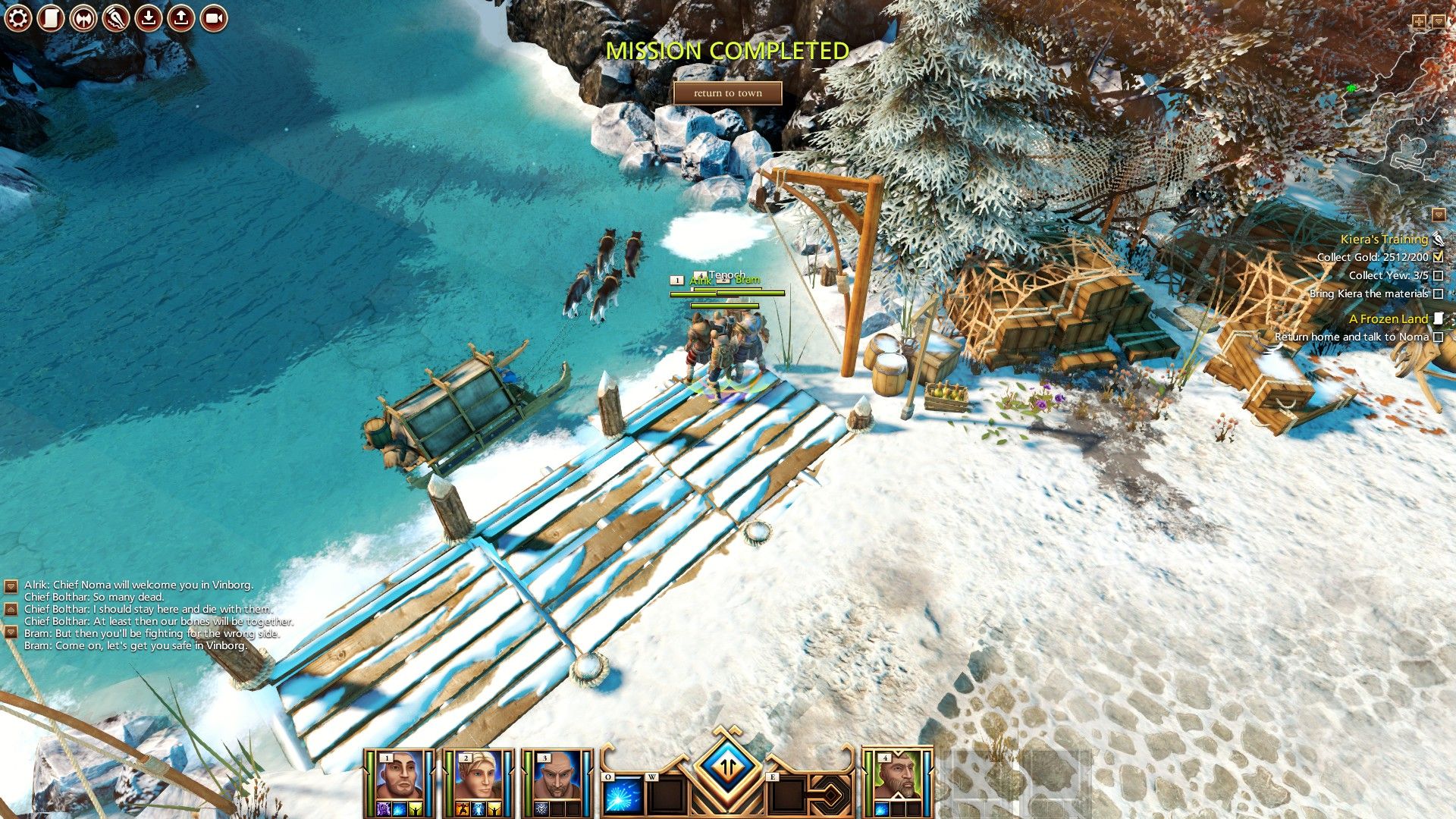 As with most Action-RPGs, the story of Kyn is very much secondary to the experience. You start the game with two characters who have just survived a trial, and now must help in a war against a group of red Orc-like beasts who are wreaking havoc on the countryside. Eventually it becomes evident that both sides must obtain a series of devices known as “Tris” which will be the key to winning the war. The story serves its purpose, to give context to your adventuring, and it is very easy to ignore if you don’t care about it; conversations and cutscenes can be skipped through easily. There is pretty much no voice-acting in the game related to quests/the story, so if you desire you can just skip through all the dialogue and get straight to combat and exploration.

Kyn is divided up into eighteen missions, which see you being transported to a new area with visits to a hub-town in between. Backtracking and getting lost is kept to a minimum thanks to objective markers and the fact that when it is time to start or end a mission, you usually just press a “start mission” or “return to town” prompt that appears on screen. The missions themselves generally take place in good sized areas that you can explore or just run through to get to the objectives. Optional side quests are scattered around the mission areas, though they are usually rather dull, mostly involving the collection of items or destroying some equipment.

Primary objectives are consistently more interesting. One mission sees you completing a series of tasks for a hermit, and in order to do this you must configure a network of pipes that distribute hot-water to different parts of the map, allowing you to melt snow that blocks your path. Another level sees three of your party members assaulting a fortress head-on while you control a fourth member as he sneaks in from behind and opens the gate. These levels are when Kyn’s mission-based structure shines, providing interesting, structured context for the combat that takes up the bulk of the experience.

When it comes to fighting, the combat in Kyn is good, but not perfect. The mechanics feel like a streamlined version of Pillars of Eternity; you can control each member of your party, but they will attempt to fight for themselves if you prefer to focus on one or two characters. Each character is mapped to a number key, and has abilities that are mapped to other keys. When things get chaotic, you can slow down time and give yourself more of a chance to issue orders. You can’t use the slower time indefinitely however, meaning you will have to use it wisely. Once you get a grip on the controls, the combat is quite fun and exciting, assuming you set the difficulty level appropriately; I found normal to be a bit too easy. Your ranged characters will keep their distance while your melee characters run in swinging. Healing spells are used rather than potions, and abilities have cool-down timers that feel just the right length. 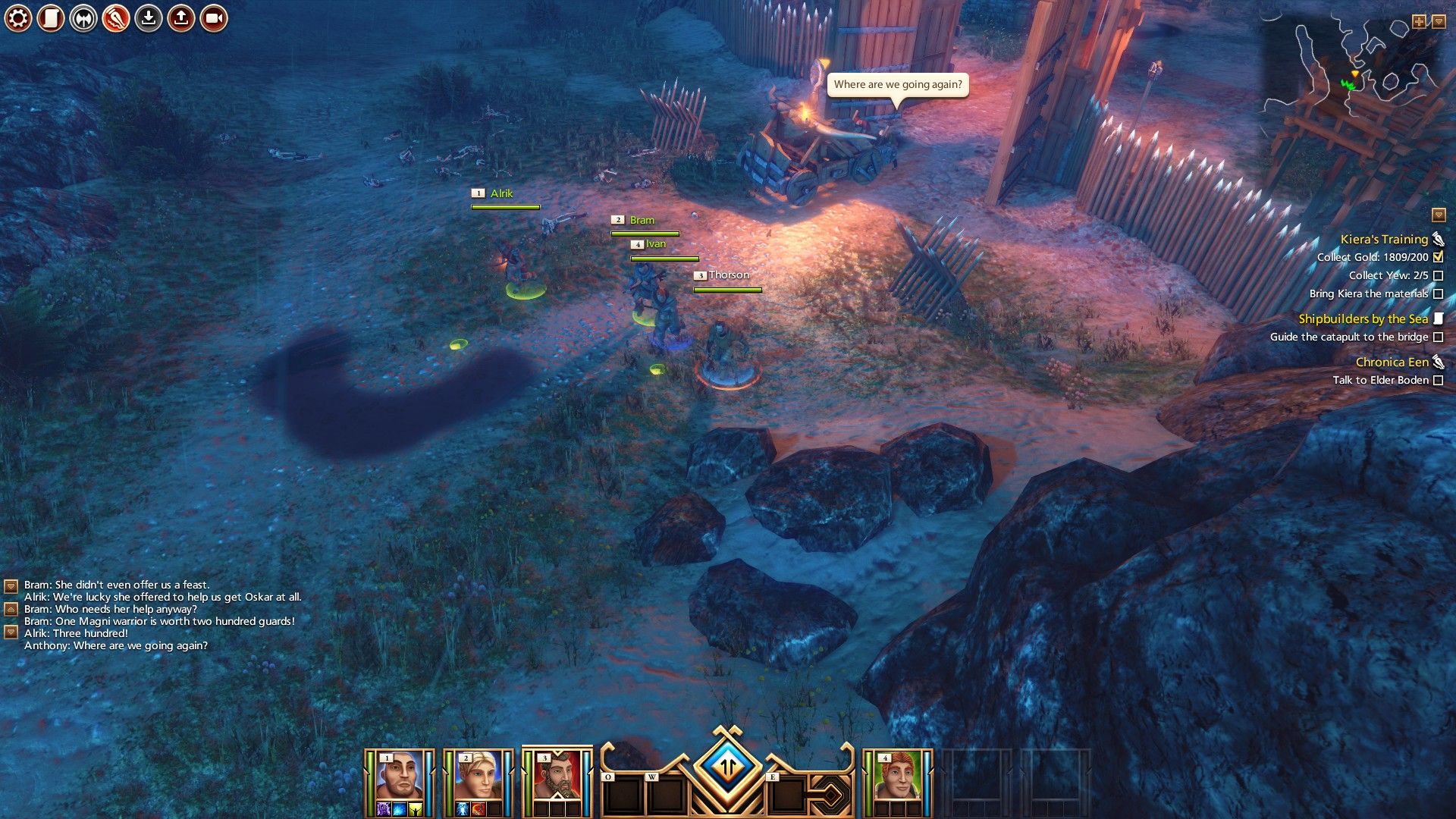 Problems with the combat arise in association with the enemy design. The game seems to draw most of its challenge from enemies that will stun or pin your characters, a trick that quickly becomes tiresome. I often found that my melee/tank character’s main purpose was to just sit up front and be repeatedly stunned while my ranged characters healed him and chipped away at the enemies’ health bars from afar. This isn’t always the case, and when the game finds good balance of enemies the combat is a joy, but sadly many encounters rely too heavily on this one debilitating effect.

The way character progression unfolds is also a bit odd. You don’t get to choose a class at the start of the game, but can fully respec your characters at any time. While I appreciate the flexibility this grants, you don’t need to put much thought into developing your characters. Especially since there are only three different stats you can pour points into, with abilities that get unlocked in conjunction with how high these stats are.If you find a piece of equipment you want but don’t have the right stats, you can simply go into your menu and rebalance the numbers until it works, meaning there is no satisfaction from building a party that can make use of a wide variety of equipment. Also odd is the fact that there is no XP system, you are simply granted a set amount of skill points after completing each mission, mitigating the incentive to explore and complete side quests.

You do get some say in skill specializations in the form of feed skills. These are powerful abilities that are partially unlocked as you put points into your characters. To activate them, you must pair the ability with a ‘feed stone,’ and different stones result in different effects for the abilities. These are not abilities you use often, only in the toughest encounters. Examples are an ability that will place down a healing device that will heal all nearby allies for a short period of time, or summon a huge pillar of ice that will eventually fall and damage all nearby enemies. These abilities are generally interesting and fun to use, and it is a shame that the regular abilities aren’t quite as exciting. 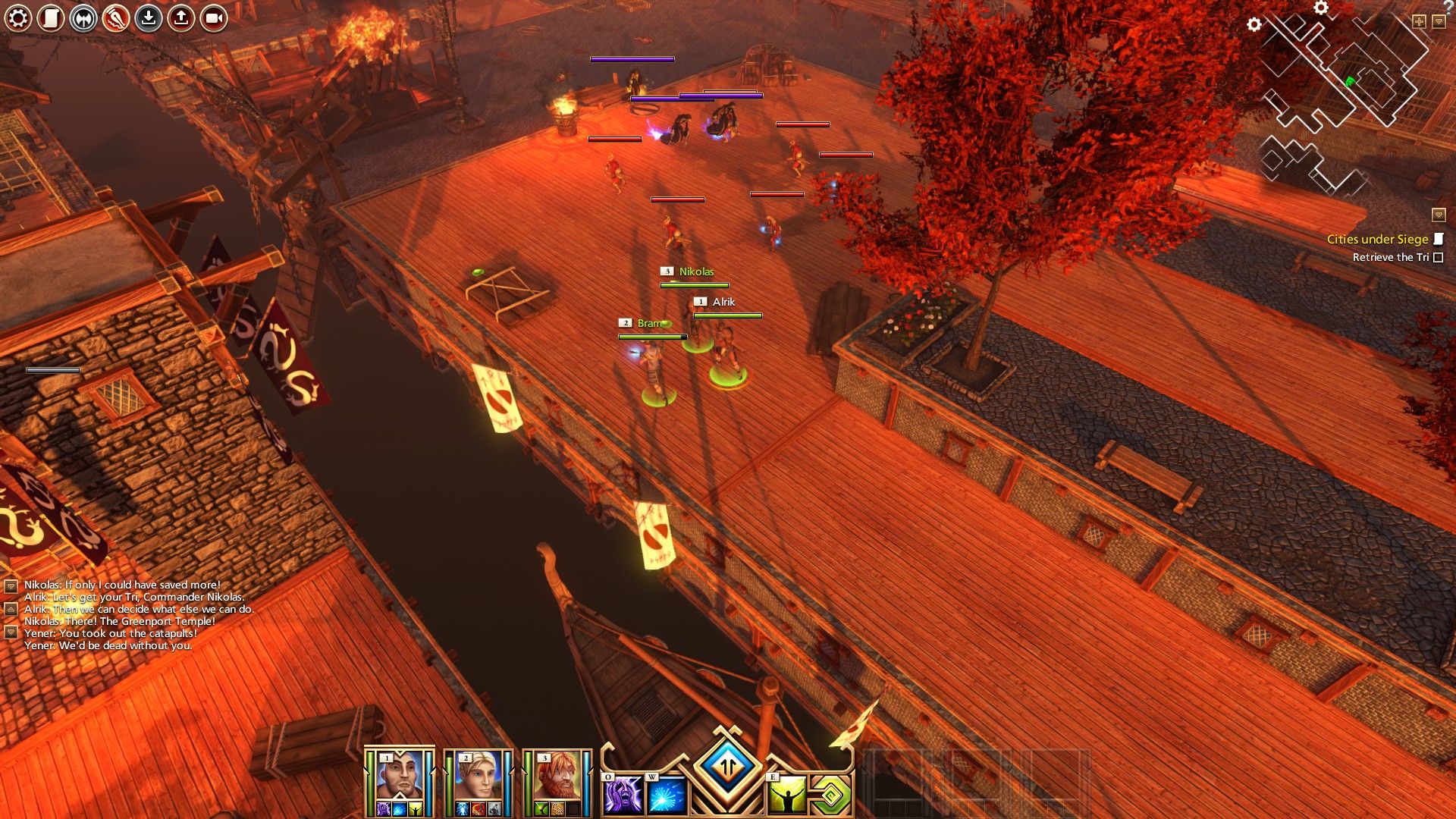 Kyn also boasts a fairly comprehensive crafting system. You will come across loads of items your travels, many of which are crafting items. As a sidebar, I will mention that having to click on every single item to pick it up is a major annoyance. When you return to town between missions, you can put these various objects to use in crafting armor and weapons. The crafting system is incredibly easy to use; you don’t need to worry about finding schematics, you are shown which items you can craft when you talk to the appropriate person. Crafting is so easy and effective that I found I pretty much ignored the traders selling goods scattered throughout the town, meaning I quickly accumulated a comical amount of wealth; the economy in Kyn could do with some serious rebalancing.

While the issues mentioned above are cause for concern, the biggest problem facing the game right now is the lack of polish. I experienced a number of bugs, from my characters falling through the map to enemies getting stuck in the terrain to various camera issues that proved constantly annoying. You can choose to lock the camera to the character you are currently controlling, or use a free-look mode similar to RTS games. I was forced to use the former mode since I have multiple monitors and in free-look mode moving the mouse to the edge of the screen didn’t pan the camera, the cursor simply traveled onto the second monitor. You also cannot change the camera location by clicking on the mini-map. While the control options suggest you can pan the camera using keys, this feature just straight up did not work for me. I ended up leaving the camera on ‘locked to character’ mode and using the number keys to switch between characters, however this was less than Ideal and I was constantly fighting against the camera.

While it won’t be winning any awards for technical proficiency or bold artistic choices, Kyn is a very pleasant looking game. The different missions generally take place in visually distinct environments, from snowy wastelands to war-torn cities to castles and forests and coastlines. The original score is the real star of the show however, with lovely music that does a fantastic job of building mood in the various settings. The rest of the sound design is fine, though unremarkable. I did experience some crashing when loading the game, and frame rate drops on certain levels when the action really heated up. 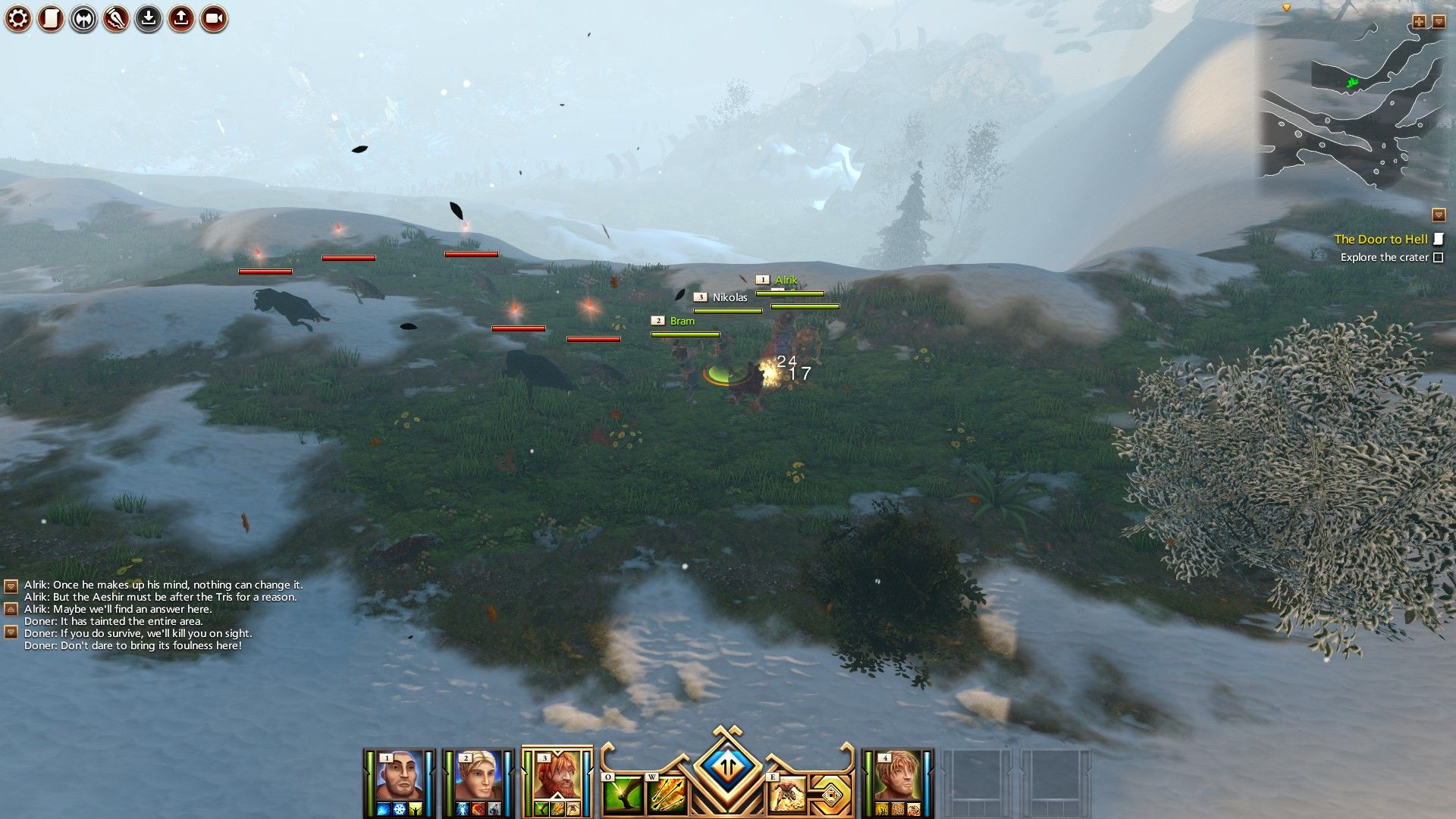 It is hard for me to speak too negatively about Kyn since the developers clearly have a lot of heart and it feels like they tried earnestly to make the game they wanted to. While many aspects of the game should be commended, especially the combat model and generally engaging mission design, the lack of polish and small but numerous design issues make it difficult to wholly endorse at this point in time. The developers do seem committed to improving the game based on fan feedback and are working actively to iron out the bugs, so in a few months Kyn might well be worth purchasing for those whose gameplay premise it appeals to. Either way I am looking forward to discovering what the developers work on next after learning from their mistakes on Kyn, they show a tremendous amount of promise.

50
Crashing, frame-rate slowdowns, camera problems and a variety of bugs and glitches give the impression that Kyn should have stayed in Early Access a while longer.
Overall
63
Kyn is a well-conceived, albeit slightly broken, party-based Action RPG that succeeds in creating interesting mission scenarios but struggles at character building and consistently enjoyable combat. 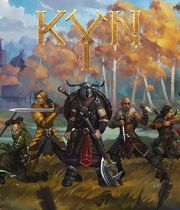