LARA CROFT AND THE TEMPLE OF OSIRIS
Platform: PlayStation 4
63
SummaryNewsArticlesVideoScreens

Lara Croft and the Temple of Osiris Review

Despite being one of the longest running franchises in the business, Tomb Raider hasn’t produced many spinoffs. So when Lara Croft and The Guardian of Light made its debut back in 2010, many were pleasantly surprised that a franchise was able to successfully take a new and more casual approach. Thanks to enjoyable gameplay and an appropriate price point, the standalone adventure was a solid diversion for developers Crystal Dynamics. And it’s no surprise, then, that it got a sequel. Unfortunately, while it maintains some of the elements that made the original game fun, Lara Craft and the Temple of Osiris has too many technical and design problems to keep the quality of this spinoff series intact. 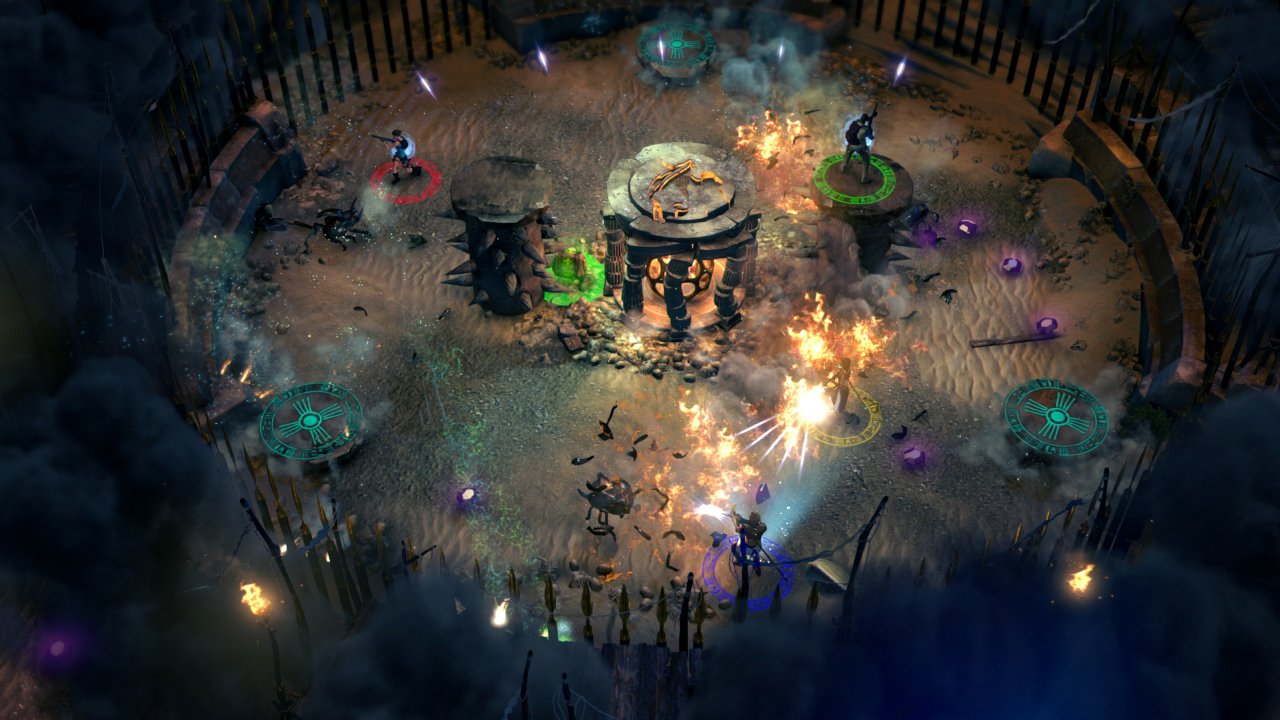 This new Lara Croft adventure is set in Egypt, inside a series of Pyramid tombs. While searching for treasure with her colleague Carter, they accidentally stumble upon an ancient artifact and activate it. This awakens the evil god Set, who traps them both in the temple. Additionally, the ancient Egyptian gods Horus and Isis are also awakened, and they join our adventurers in their quest to lift the curse and stop Set. The narrative is fairly thin, and serves as a basic way to get players through the various tombs and environments in the game, as well as the boss battles. The overall tone of the game is also much lighter than the recent Tomb Raider entries, making it easy to enjoy but just as easy to ignore. While the availability of cooperative play in The Guardian of Light was a nice addition, The Temple of Osiris makes it the primary focus. But before getting into that, let’s touch on the gameplay. If you enjoyed the previous game’s mix of action, platforming and puzzles, you’re likely to be left satisfied again. The game spans the central hub area of the temple, from where players can enter other tombs. You’ll be frequently returning to this area and exploring new paths that become available, because the tombs themselves are often short, taking less than 10 minutes to complete. Overall the game feels short too, taking under 5 hours for the main story path.

Once again a twin-stick shooter with an isometric static camera, The Temple of Osiris will satisfy fans looking for more of the same. The variety of weapons at players’ disposal have different damage and ammo consumption stats, from classic dual pistols to grenade launcher and flamethrower. Players will face off against enemies like scarabs and skeletons, however most will either rush you or have one ranged attack. The action remains chaotic and satisfying, though most of the weapons don’t feel like they pack a punch. Your unique weapon is The Staff of Osiris, which shoots a low-damage beam of energy in a straight line, and is often used to solve puzzles. It must be equipped when playing solo, taking up one of the four active weapon slots.

While exploring, you’ll find ammo boxes, and max health and ammo upgrades. You’ll also be collecting gems, which act as a currency in the new character progression system. Lara can outfit herself with two rings and a pendant, which grant you passive abilities, and there is even an item quality mechanic. Basic rings may have a single buff, such as increased weapon damage, but they come with a downside like reduced bomb blast radius. But once you find uncommon or rare rings, they have multiple benefits and no negative effects. Amulets act a bit differently – a special effect gets applied after you’ve dealt enough damage without being hit yourself. These buffs range from scattershot to adding elemental damage to your bullets. 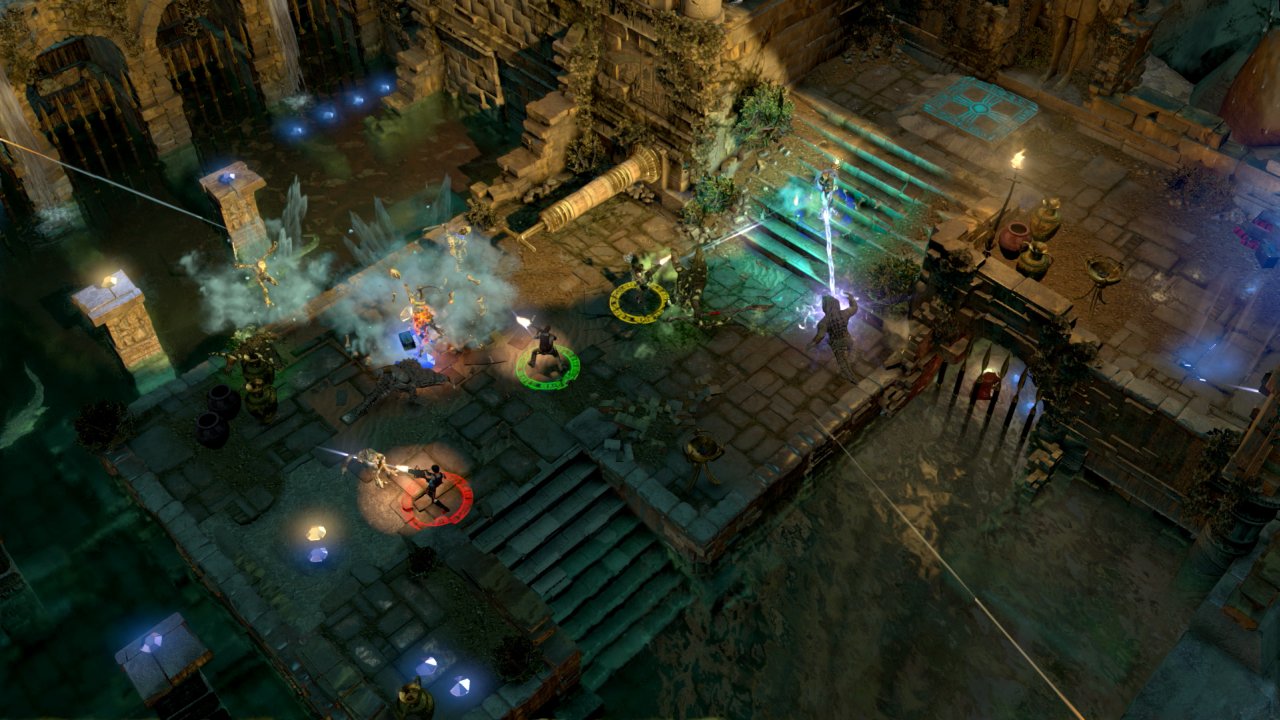 The catch is that all items can only be gained from opening chests – which cost various amount of gems to open, and contain a random item of a specific rarity. While it’s a decently designed system, it introduces unnecessary grind to get as many gems as possible to open the best chests and get a very rare item with tons of benefits, or a weapon that has great stats. Even then, your luck of the draw is completely random, so you could be getting multiple rings but no weapons. Not to mention, the game is already rather easy (with no difficulty setting) and most players should have no problem even using the common grade items.

While the game can be completed solo, it was clearly designed around cooperative multiplayer. There are four characters to choose from (the two Gods, Lara, and Carter), and they each can use almost all of the weapons in the game. The God characters are reliant more on the Staff of Osiris, while the humans are more about traditional firepower. Still, these are minor differences that don’t really tie into any special abilities. The Temple of Osiris also boasts drop in/out multiplayer, something its processor lacked – but it’s one of the worst designed implementations you’ve ever seen.

The idea behind dropping in and out is that it’s supposed to be seamless. In Osiris, it’s anything but. Anytime a player drops or joins the game, the game forces everyone to select their characters again, followed by a loading screen. You can imagine how quickly this gets annoying in public games. With frequent connects and disconnects, resulting endless loading screens and character re-selections, the game becomes impossible to enjoy with strangers. To the game’s credit, the reason for a loading screen is because all puzzles and enemy forces get adjusted depending on the number of players. It’s a neat idea that adds replay value (in addition to leaderboards and challenge objectives in each tomb), but it grinds the public games to a halt. Cooperative games are often better enjoyed with friends due to the nature of playing with strangers, but The Temple of Osiris has an outright anti-public design to it. 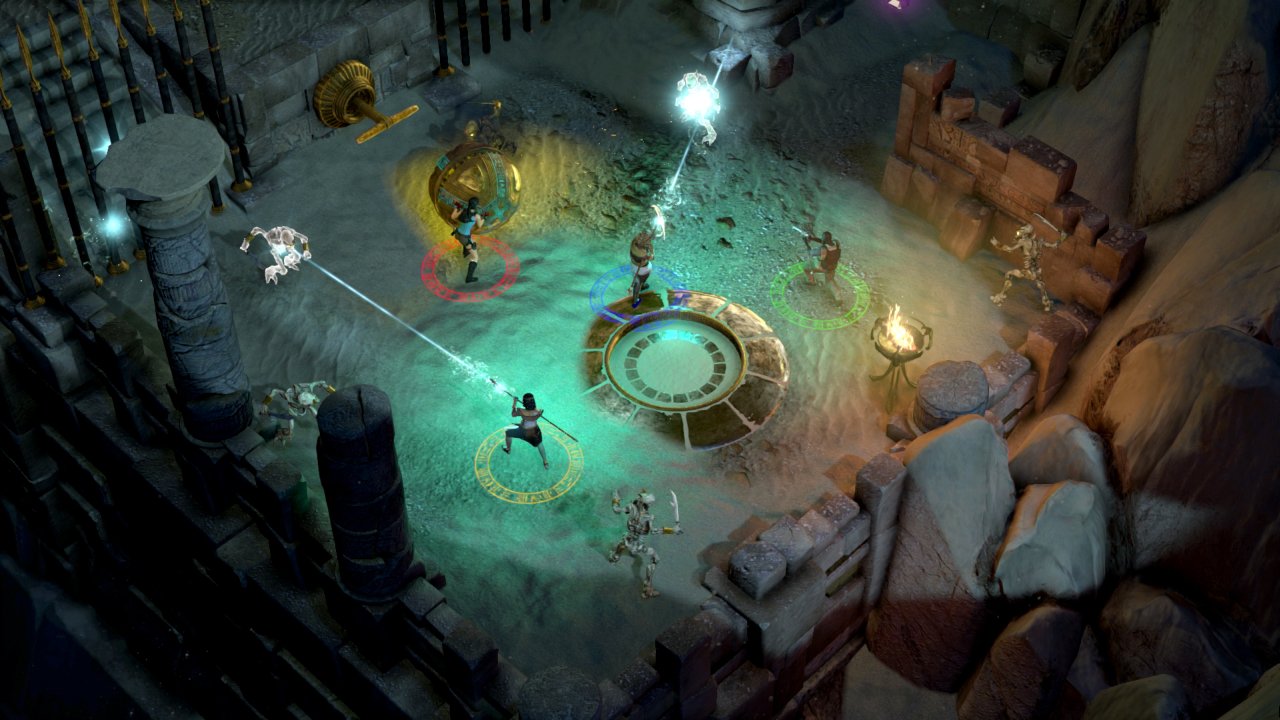 The Temple of Osiris also has a few technical problems. Network stability aside, the camera often positions itself too far or too close to the action, and the isometric view angle can make platforming frustrating. Deaths resulting from a misdirected jump are a frequent occurrence. The gems and item pickups are physical objects for some reason, meaning they interact with the environment – and the game loves to throw them around. Often, when an enemy explodes or as a trap is activated, the gems are scattered beyond your reach or altogether off the level, and there was nothing you can do. Similarly, a few puzzles require you to get a ball across gaps using bombs; it’s just based on luck if the physics cooperate and sling it in the desired direction.

When you consider the relative success of The Guardian of Light, it’s sad to see that the developers got The Temple of Osiris so wrong. Despite maintaining the enjoyable mix of puzzles, platforming, and action, this sequel attempted to add depth via the character customization system. Sadly, the grind for gems and random nature of gear drops from chests doesn’t add much depth, especially given the game’s relative ease. It’s also a short experience, though there is some fun to be had replaying levels with friends. Don’t bother trying to play online with strangers, as it’s a technical design mess. For a game that’s supposed to focus on multiplayer, that's a fatal flaw. With a higher price point and without much added value, plus a largely problematic mix of unrealized ideas and design problems, Lara Croft and The Temple of Osiris is an all-around disappointing sequel.

Our ratings for Lara Croft and the Temple of Osiris on PlayStation 4 out of 100 (Ratings FAQ)
Presentation
74
Nice atmosphere and good environment variety, but nothing in particular stands out
Gameplay
71
The mix of action and puzzles can be enjoyable, but an array of small annoyances dampens the fun. Character customization and random loot drops doesn't add much depth in a game that's already quite easy.
Single Player
67
Has its moments, but the campaign is short and some set pieces are repeated. Tombs are very brief as well.
Multiplayer
45
Poor design severely detracts from a game that's supposed to be all about playing with others.
Performance
64
Occasional physics glitches, camera annoyances, long loading times and frequent multiplayer disconnects.
Overall
63
With troubled multiplayer design and an unwarranted higher price point, Lara Croft's spin-off reputation may have trouble recovering after The Temple of Osiris.

Lara Croft and the Temple of Osiris 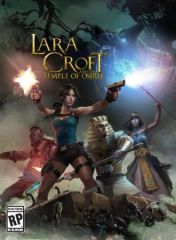