The game is fairly open-ended, as mentioned earlier, except for a few set pieces where you have no choice to return and can only go forward – a great example of this is a battle earlier on in the game for which I simply was not prepared for and caused me much frustration. Sure, there was a confirmation needed that I was “really ready” to fight, but it was so above and beyond anything I’ve faced previously (wave after wave of enemies) that I spent a lot of time trying to get through it. The game does treat deaths fairly – if a character falls but your party eliminates the enemy that attacked, they will get back up and recover health over time. But in this particular instance the battle was on-going for a good 10 minutes so any deaths were non-recoverable until the very end. Given that, the game also lacks any kind of indication of what level the enemy is so it is hard to judge if you are behind the game’s intended character leveling curve. The only exception to this is enemies marked with yellow names, but those are usually mini-bosses anyway so they are expected to be difficult. The game’s quest journal also lacks any kind of direction, often leaving you to wander around actually trying to figure out where the location of your quest goal is. 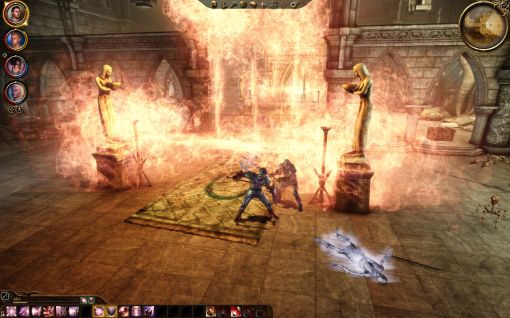 Traps are bad, unless you want to cook some skeleton meat
Having been developed over many years, Dragon Age is running on an older engine that showcases some below average visuals, especially early on in the game. As you progress though, visuals improve as indicated by later years of the development process. The game is not very flashy or particularly great looking, but it doesn’t need to be. The voice acting is great, regardless of when it was originally recorded and things fit together nicely given the game’s huge lifecycle to the release date. This is great news for RPG fans though, who are not known for demanding the latest graphics or upgrading their PCs very often – Dragon Age is less of a demanding game then Mass Effect from my benchmarks, so even older video cards (Nvidia 7xxx series, ATI x1800 series) and processors (Core 2 Duo) will have no problem running the game. One of the big factors of the promotional visuals was the blood, and it does look great on your character’s armor but the downside are the very ugly pools of red texture that cover the floor after you kill a boss or a large monster. The sound of the game was discussed earlier, it is well composed and provides good atmosphere to the gameplay. Excellent character voice acting and well-written dialogue add to the composition values.
Dragon Age: Origins is a great start for the series from BioWare. The game smoothly fits the setting and characters expected in the genre while brining their own originality and outlook on things. The gameplay is rock solid for the most part, though its tough difficulty curve, combat balancing issues and useless friendly AI may bring much frustration to all but the more dedicated fans of RPGs. The world of the game is vast and I know that this review has barely scratched the surface of everything that you can do and see. Dragon Age is a good game that should be played for the story, characters and combat and should be on your holiday wish list this year if you have any interest at all in old-school Role Playing Games.
Prev1234
Our ratings for Dragon Age: Origins on PC out of 100 (Ratings FAQ)
Presentation
84
Excellent story and characters, but the game lacks a bit in visuals. The character menus are designed well and overall the interface is very friendly.
Gameplay
80
Classic dungeon crawling mixed in with interesting story and engaging atmosphere. Some gameplay elements may prove too frustrating or challenging for casual fans though.
Single Player
90
A broad and lengthy experience that will keep you busy for many hours. Some replayability thanks to "Origin" stories, but ultimately lacks the freedom of random content generation.
Multiplayer
NR
None
Performance
(Show PC Specs)
CPU: Intel Core i7 CPU 930 @ 2.80GHz
GPU: Sapphire Radeon HD 5870 Vapor-X 1GB
RAM: 6GB DDR3
OS: Windows 7 Professional 64-bit

90
Due to an older engine the game will run well on a wide range of hardware configurations. No crashing issues encountered. A few bugged quests, but it's forgivable due to their sheer volume.
Overall
87
A fun and engaging RPG experience that dedicated fans will love, but some newcomers may have troubles with. Decisively worth experiencing.