If there are any negative things I will say about the game, it is the extreme micromanagement. Not the usual RPG stuff – looting in the game works as well as any other and I enjoy finding new weapons and armor and selling the old – but the whole “Tactics” business. Once again, some people will surely love this feature because it basically lets you program your AI teammates to allow for some great combos during battle with little involvement from the player. For me, however, this feature was very tedious and frustrating at times. The Tactics feature allows you to setup all of your characters to perform any action available to them based on triggers. The list of tasks executes based on these conditions and also down the line – you start off with just a few Tactic slots, so you setup the basic “Nearest Enemy visible -> Attack” combo, along with “Self health < 25% -> Drink health potion”. The frustrating thing about this system is that your characters are literally brain-dead during battles unless you manually order them around, or have perfected your Tactics decision tree. As a simple example, if you enter combat and only have one character selected, he will begin attacking as you asked while the rest of your party stands in place, getting chopped to bits by the incoming enemy group. That’s more than frustrating, to watch your party refuse to even acknowledge enemy presence unless manually setup to do so either in-battle or at the previously setup Tactics logic. If you select the whole party and tell them to attack, they will do just that – swing with the sword or throw the elementary firewall at the enemy until it is dead, only rarely entering their Tactics decision tree to actually perform some moves or spells. So the best way to play is to setup your Tactics tree and then stick with controlling only one character directly. The catch is that your Tactics tree is only limited to 3 or 4 slots at the beginning, so as you level up you will be able to add more actions based on the conditions a character is facing. This also means that you may need to keep re-arranging your Tactics tree when new skills become available, because the Tactics execute in a Top-to-bottom manner, so be sure to place your “Heal yourself if dying!” setting at the top and leave it for the rest of the game. Your character’s total inability to act on free will (Unless Tactics are setup) makes for some literally turn-based combat through some difficult parts of the game that action fans will likely find frustrating. As you have to keep pausing the game to assign your party new orders because their Tactics tree is too short to setup any effective attack combinations. All in all, the whole feature is extremely frustrating and seemingly useless for the majority of the first half of the game, were Tactics slots are too limited in number to be effective, leaving you with pause-and-go gameplay which simply breaks the combat flow. 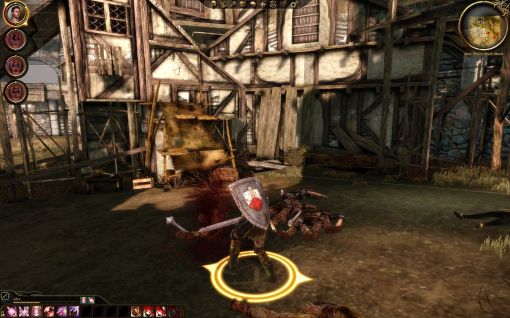 He's dead - No blood splatter analysis needed
On a general note, I found the combat to also be unbalanced in terms of difficulty. Early on, there are plenty of times you will die unless you choose to pause the game every couple of seconds and assign new tasks. However later in the game when the party has heaps of gold, loot, weapons and Tactic tree combinations, you will breeze through every dungeon on Medium difficulty all the way to the finale. Enemies do scale in difficulty but they are no match for your deadly weapons and attack combos. Another thing that I find annoying is the warriors – you are often fighting groups of baddies at a time and your tanks are in the heat of the battle – yet they poses so few area-of-effect damage attacks, that they become almost useless. While your one or two warriors are busy attacking a single target, your mages are tasked with continuously nuking the whole area and trying to keep the heat off of themselves. In other words, the mages are very overpowered and overused in the game, with the rare exceptions of fighting smaller groups or single enemy bosses.
Prev1234Next