Fans of the Resident Evil franchise are quite familiar with annoying companions. In Resident Evil 4, players escorted the president’s daughter, yet she did little more than get in the way. Resident Evil 5 went one better and had a partner that could actually shoot, but it faulted when she gorged on supplies or got stuck. The companions in the previous Revelations game were fairly inconspicuous, but they were hardly valuable team members. Short of creating flawless AI, the only option was to give players more control. RE5 tried this with co-op, allowing other players to waste precious supplies, but it was not the answer to the problem in single player. Resident Evil: Revelations 2 provides a simple solution. It allows players to switch control between two distinct characters at any time. Smartly presented across four episodes, the story is an interwoven adventure split into halves; one for each team comprising of two characters. 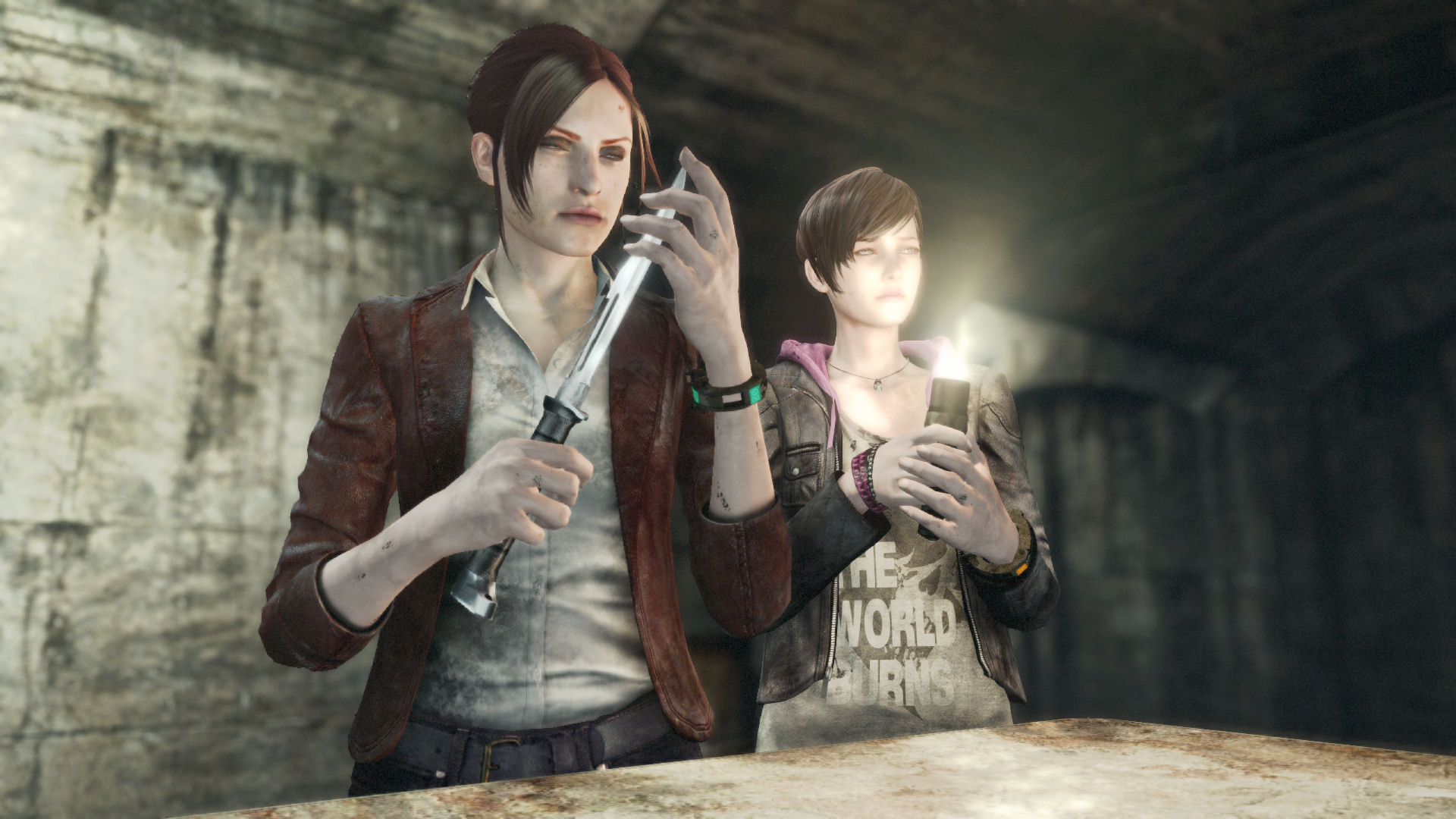 Moira Burton and her friend, Claire Redfield, form the first team after they are kidnapped and imprisoned on a remote island. Attached to their wrists are bracelets that measure fear, injecting them with a deadly virus should their terror increase. An Overseer character wishes to scare them to death, literally, and this takes the pair through rigors after they escape the prison and fight zombified locals. The locals, or afflicted, are the unwilling participants of virus experiments, and the once peaceful island has turned into a nightmare. Claire has dealt with these situations before but Moira refuses to even handle a gun, relying instead on a flashlight and crowbar. After sending a distress call, they pursue the Overseer because they believe that nobody is coming to help.

The second team consists of Barry Burton, Moira’s father, and a mysterious young girl named Natalia. Barry arrives on the island some time after the distress call, hoping to save his daughter despite their past disagreements. While initially well-equipped, they will soon be scrounging for resources much like Claire’s team. Natalia cannot remember much about the island, but her ability to see through walls is useful and important to the story. While the story has several twists, it manages stay grounded and focused. Compared to its predecessor, there is less redundant exposition and almost none of those awful one-liners. The four main characters seem human, at least compared to previous games, and this is complemented by reliable voice acting. Each character has skills to complement the other within their respective teams. One character takes an offensive role, similar to previous games, and the other fills a support role best used when the action fades.

The offensive characters, Claire and Barry, are the ones you control when the action gets heated. Although not a straight shooter, there are periods of intense action involving bosses or numerous afflicted. Thankfully the controls are sensible and fair; you can swap quickly between four weapons and instantly aim equipped explosives. Large enemies will still knock you down, although dodging is effective and easy to control. The environments allow room for a modest, albeit clunky, sprint and you can also climb objects to provide a small buffer against attack. Enemies are more responsive to counter this free movement, using bursts of speed or strafing the player. Only occasionally does the game resort to cheap tricks, like forcing a character switch prior to a cut scene, but these are merely remnants in a franchise that has almost discarded its classic rigid design. While it provides a suitable challenge, the offensive characters control well and the action is satisfying. 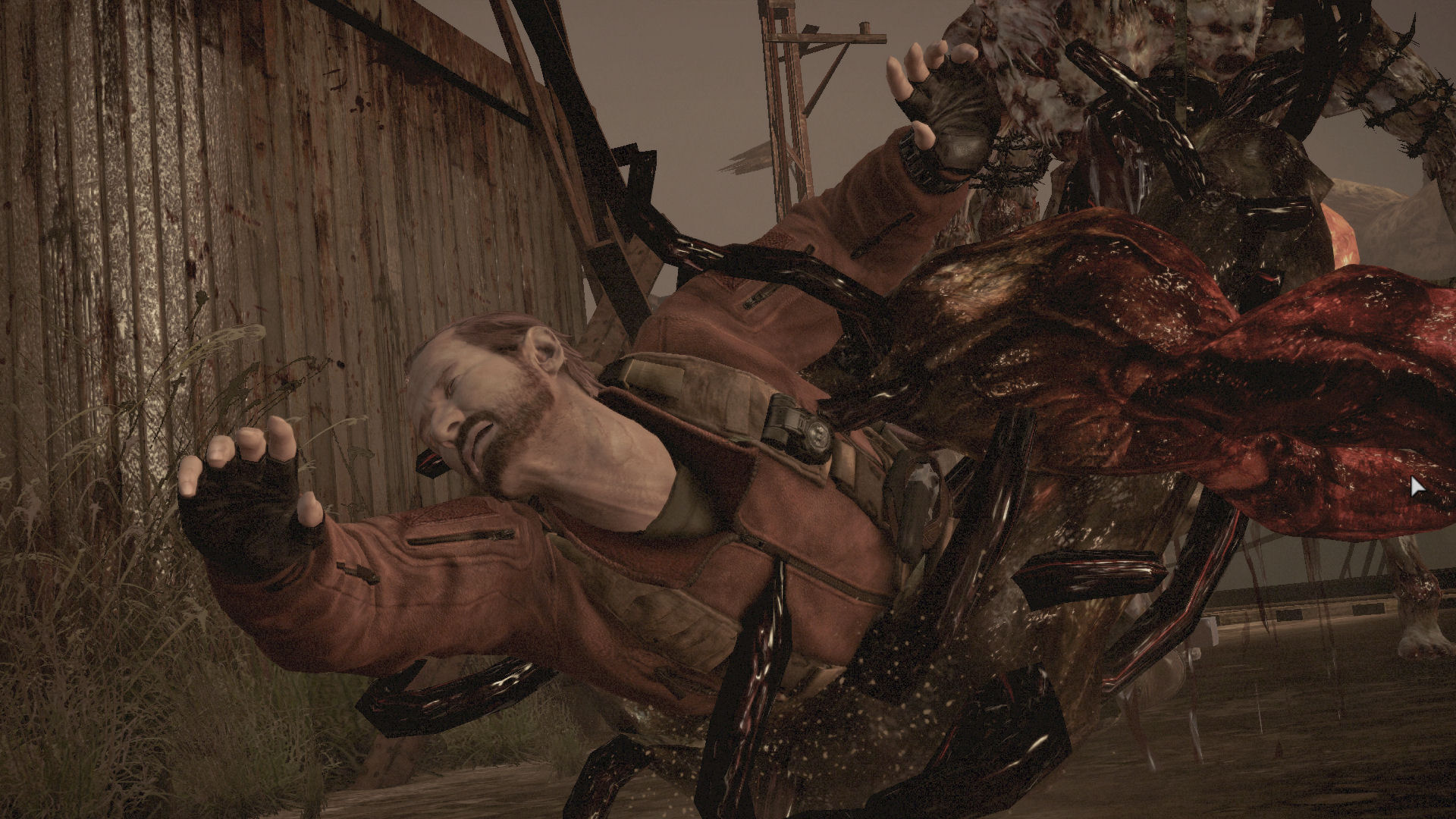 Barry is just not the hugging type

Moira and Natalia, the support characters, are typically used for navigation and exploration. Moira’s flashlight exposes hidden supplies and her crowbar can open doors. Natalia can reveal provisions with her extrasensory perception and crawl through small spaces. Natalia’s special ability is exploited wonderfully, able locate weak-spots and invisible enemies, promoting dynamic switching to Barry during combat. Neither support character is useless in combat, as Natalia can hurl bricks and Moira can swing a mean crowbar. The support characters play an important role in the underused puzzles and gain access to obscure areas. Given their useful abilities, you will be spending quite some time controlling them.

Since you switch between characters regularly, all the AI needs to do is make sure none of their limbs drop off. In a bizarre twist, the companion AI is actually good in Revelations 2. Well, good compared to Sheva Alomar from RE5, who tried bouncing bullets off her partner’s head. Non-controlled characters will aim their flashlight at whatever you are looking at, negating the need to use them exclusively. They avoid the general line of fire and rapidly move out of the way. If given the right equipment, they will heal during combat and can produce a last-second save. You can order them to hold position and they usually comply. When moving through doors, they will instantly appear by your side. Typically the afflicted attack the player character, which may result in Moira chasing after a monster twice her size and hitting it in the spine with a crowbar, but it works better this way. Only twice did the AI get stuck and fixing it was as simple as switching to that character for a few seconds.

The game is paced well considering it involves four different characters over two separate campaigns. There is adequate downtime before and after fights, perfect for surprises and moments of relief. There is an opportunity to utilize stealth to preserve ammunition, particularly effective during Barry’s campaign because Natalia can track foes through walls. The game is still a test of endurance, as you spend quite some time in areas collecting supplies and readying for upcoming danger. Upgrading weapons and crafting items is effective, as is managing the inventory because you can swap items between characters even when briefly separated. Each team progresses forward steadily, with negligible backtracking, and this takes them through locations such as sewers, an abattoir and a fishing village. 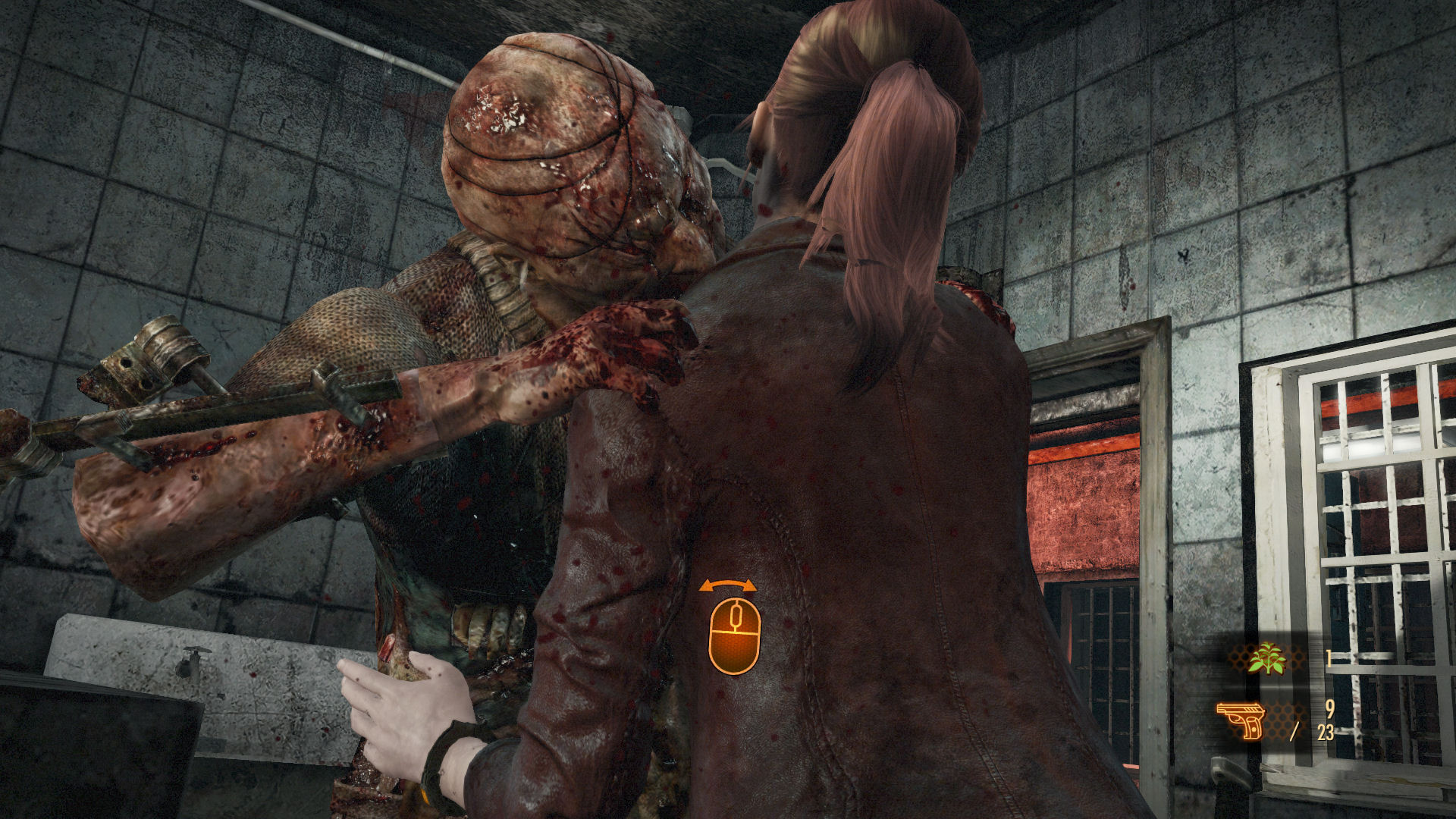 Some locations are shared across both campaigns and revisiting familiar areas is interesting because the enemies differ and the environment has changed since your last visit. Players witness the aftermath of story events, as the sewers you waded through are now dry and the bridge you crossed has collapsed. It exploits the time difference between the two campaigns while still providing a significant portion of original content. Surprisingly, there are interactions in Claire’s campaign that introduce changes to the levels in Barry’s campaign. This might be as simple as opening a gate or moving a box, taking Barry on a different route or bolstering his supplies. One choice in episode three will even alter the game ending, resulting in a longer boss fight and a better conclusion for characters. These level interactions are underused given how well they link the campaigns together, but they do provide some incentive to replay.

The lack of online co-operative campaign might be a problem for some, but the characters in the story are designed to be controlled by one player. Fortunately there is an online RAID mode that allows two players to shoot their way through varying enemy types without a story getting in the way. Some of the levels are taken from previous games, including Resident Evil 6, and old monsters also return. This mode proves that the game can sustain lengthy combat while keeping it enjoyable, and provides good value as you upgrade multiple characters with different skills or weapons. You will even find the RAID mode entertaining when playing alone. It is a comprehensive offering, though it may not replace the joy of playing through the campaign with a friend.

RAID mode can be entertaining when playing alone

Although the game looks considerably better than the first Revelations, it falls short of fully capitalizing on the remote island setting. The lighting in the world is flat at times and dynamic shadows can be blocky when infrequently used. Textures are not always great, but they consistently blend well throughout levels. Characters look great and this is aided by subtle animations that might have characters raising their weapons in water or shielding their eyes from light. The gruesome and well-animated afflicted creatures are probably the best part of the visual package. With a bit more detail and better use of lighting, Revelations 2 could have built an impressive world.

With four different characters used smartly across two interconnected campaigns, Resident Evil: Revelations 2 is a great survival-horror experience. Presented in episodic form, the story rolls forward and brings variety that ranges from stealth to escape sequences. The supporting characters are more than just companions; they are part of a team because the player can control them at any time. The campaign becomes a collaborative effort and the complementary skills bring diversity. Splitting the campaign in half allows for some experimentation, as levels change based on previous actions and key areas are revisited. Online play is supported through a RAID mode that provides arcade inspired content as you level up characters and fight creatures in small battle arenas. Both the online and campaign modes employ a fair combat system that minimizes rigidity while maintaining basic survival-horror mechanics. This is a game that makes it clear that teamwork is about characters with complementary skills, and fear is an excellent motivator.

Our ratings for Resident Evil: Revelations 2 on PC out of 100 (Ratings FAQ)
Presentation
74
Mixed quality visuals, but at least the creatures and characters look good and are nicely animated. Dialogue and voice work have improved.
Gameplay
86
Switching between characters during combat, puzzles and exploration provides an enjoyable blend.
Single Player
80
A well paced campaign across four episodes for 11 hours. The dual narrative exploits the time disparity between teams and builds a science fiction story that has some good twists.
Multiplayer
76
RAID mode offers plenty of content for online players and is even good when played alone.
Performance
(Show PC Specs)
CPU: Intel i5 3570k
GPU: Gigabyte 7950 OC 3GB
RAM: 8GB DDR3
OS: Windows 7 Ultimate 64-bit

83
Some unexpected slowdowns but the framerate is usually smooth and the loading times are short.
Overall
81
Resident Evil: Revelations 2 offers an interesting campaign in a unique format, cleverly promoting switching between four diverse characters. 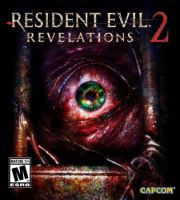