Crypt of the NecroDancer Review

Rumbling and rumbaing through a remarkable rhythmic roguelike

It’s not often that I look at a game and think “goodness me, this would make a brilliant arcade machine.” About the only thing the humble arcade cabinet can offer to gaming right now is the chance to play with peripherals that are too outrageously big and expensive to keep in your closet alongside your plastic Rock Band bits and pieces, but it’s rare that such an offer is strong enough to overcome my natural distaste for loud rooms, suspiciously sticky controllers, and an overwhelming smell of hot plastic. 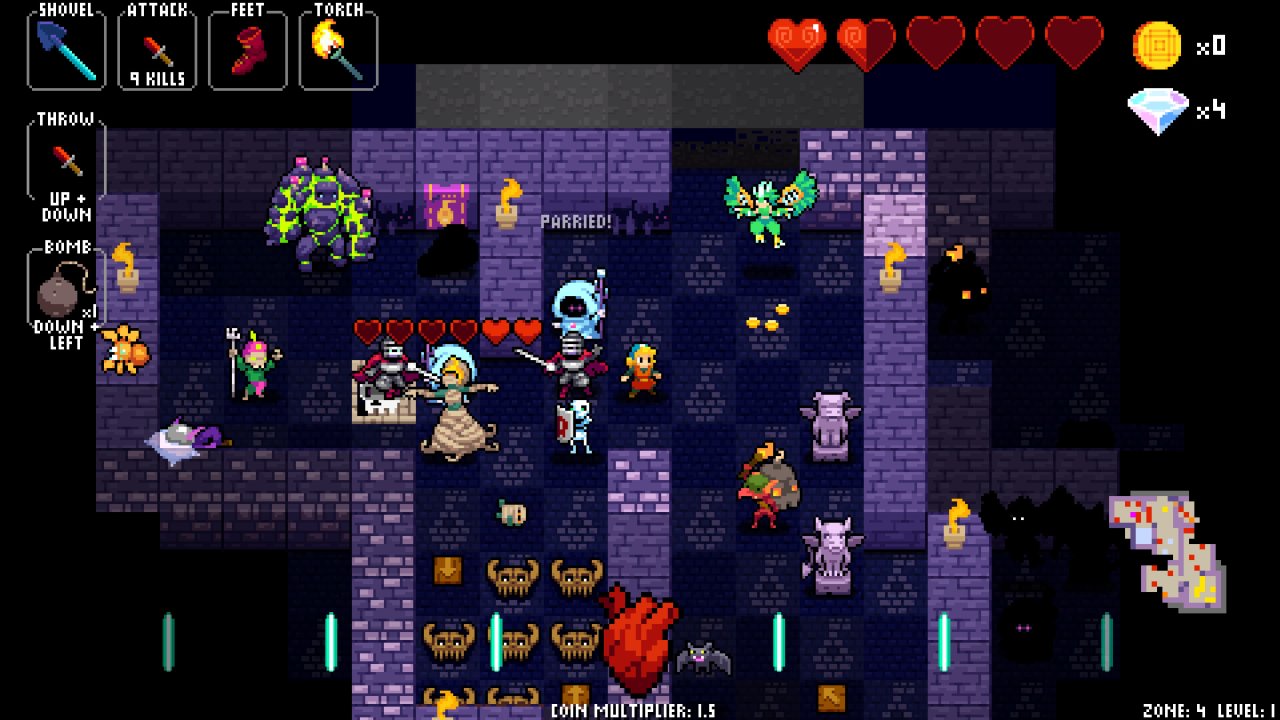 Consider it an unconventional mark of praise, then, that I’d go out of my way to play on a Crypt of the NecroDancer arcade machine. I can see it now: a matte-black repurposed DDR cabinet, impractical and heavy, painted with the lurid artwork of the loading screen, waiting to explode with light and sound at the slightest provocation. Even the intro cinematic is the kind of animated, condensed affair that you could easily see looping over and over in a dim corner somewhere: Cadence, the game’s protagonist - I hope you like music puns, by the way - is out digging in a graveyard looking for the titular crypt, when she finds it by way of a sudden collapse. The Necrodancer finds her near-death, and being a public-spirited sort who needs no excuse to practice his art, forces her ailing heart to beat to the music in the crypt - a small price to pay for free medical attention - before vanishing into its depths. Such is the slightly convoluted explanation for Crypt of the NecroDancer’s main gameplay premise: classic tile-based roguelike gameplay timed to the beat of Danny Baranowsky’s remarkably varied soundtrack.

In a roundabout sort of way, Crypt of the NecroDancer’s rhythm-driven gameplay not only makes perfect sense, but makes me wonder why nothing like it has been tried before. Combat in traditional roguelikes has always been something of a turn-based dance; carefully stepping here and there, into recently-vacated space and away from encroaching foes, to maximise damage and dodge enemy attacks. Necrodancer - I'm just going to call it Necrodancer, because stylised capitalisation is the work of language heretics - simply speeds things up a little bit and designs itself to fit. Instead of having all the time in the world to ponder your next move, you and everything else in the dungeon are compelled to move to the inexorable beat of the song. Suddenly, through this one small change, the game becomes an intense exercise in constant planning, thinking ahead, and split-second decision making. Situations that you could have once tackled over the course of a few minutes now have to be solved in seconds, all while moving to that overpowering beat. Within moments of entering a room, you need a plan. Step left, step up, lunge at the skeleton, dig out a wall to skip a beat, cut the slime that just moved into range, dodge the fireball, step around the trap tile... whoops, looks like you didn't take that wind wizard into account, you dolt. Now you've been pulled off course, you've missed a beat, dropped your coin multiplier, and you're about to be attacked from three different directions. You have about twenty-five milliseconds before the next beat hits and those attacks land. It's extraordinarily exhilarating, being put on the spot like this, and there's nothing more satisfying than fighting your way out of a chaotic melee without taking a scratch. 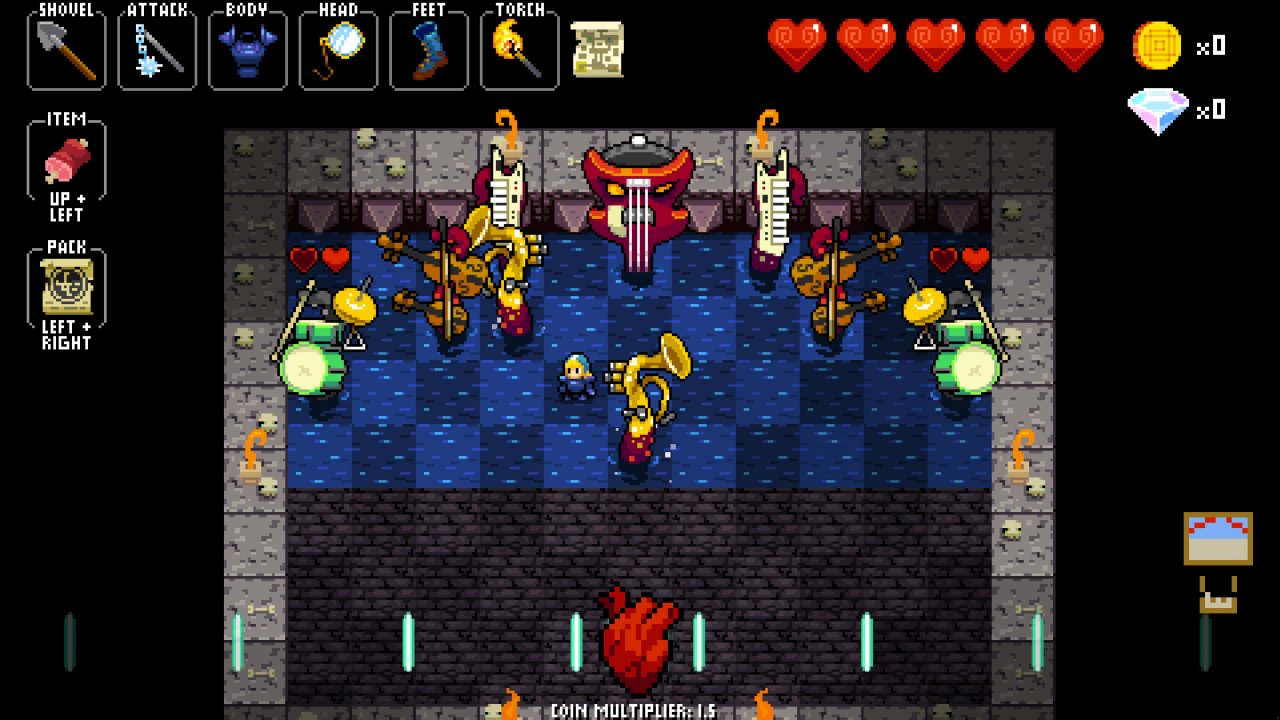 That's the truly beautiful thing about Necrodancer's combat: it's almost always possible to handle a fight in such a way that you completely evade damage. Every enemy moves according to a certain pattern, some fairly simple, some much more obtuse, and the key to survival is to dance around them; to step nimbly out of reach on the beat before a scything attack, to dart in and strike while they're recoiling, to move warily around them until the perfect opportunity. Most of this is opportunistically played out in the heat of the moment, but there are certain combinations of moves you can memorise to deal with particular scenarios - if you’re boring, that is. You'll have to learn to dance on the fly too, at least if you plan to beat the game at some point, because Cadence is as fragile as a sheet of plate-glass being carried across a busy road, which I suppose is inevitable when you go out on an adventure in your gardening gear. In the very first level of the very first zone, there are certain enemies that can kill you in a single hit, and it only gets harder from there. Initially it feels ruthlessly unfair, punishing you needlessly for even the slightest slip-up, but as you learn enemy patterns and weapon behaviours, it smooths out into a more reasonable - but still, of course, exceptionally challenging - experience. It's a brand of difficulty that will seem very familiar to any seasoned Spelunky player, in the sense that death is always avoidable but nevertheless entirely to be expected, and first and foremost your fault. Oh, it may be down to a matter of ignorance sometimes, but the learning experience is all part of the fun.

And since I feel obliged to put good design on a pedestal whenever I see it, let’s appreciate for a moment the way a large amount of Necrodancer’s upgrades affect you in ways other than boring stat boosts. If it was just a case of sharper swords or shinier armour then Necrodancer would still be great, if a little homogeneous, but so many upgrades are specifically engineered to force you to change how you think spatially; boots that leap two spaces at a time, weapons that lunge forward or knock enemies back, spells that only hit specific squares, a drum that lets you stand still for a beat, and so on. It’s brilliant, not necessarily for throwing in extra complications but for throwing in the kinds of extra complications that you can solve at a glance, provided you realise what they entail. You’ll die countless times because you forget about these little modifiers, stopping to attack by accident or lunging in front of a runaway bus, but with sufficient practice they can be managed with the kind of immediacy that doing elaborate mental maths could never achieve. 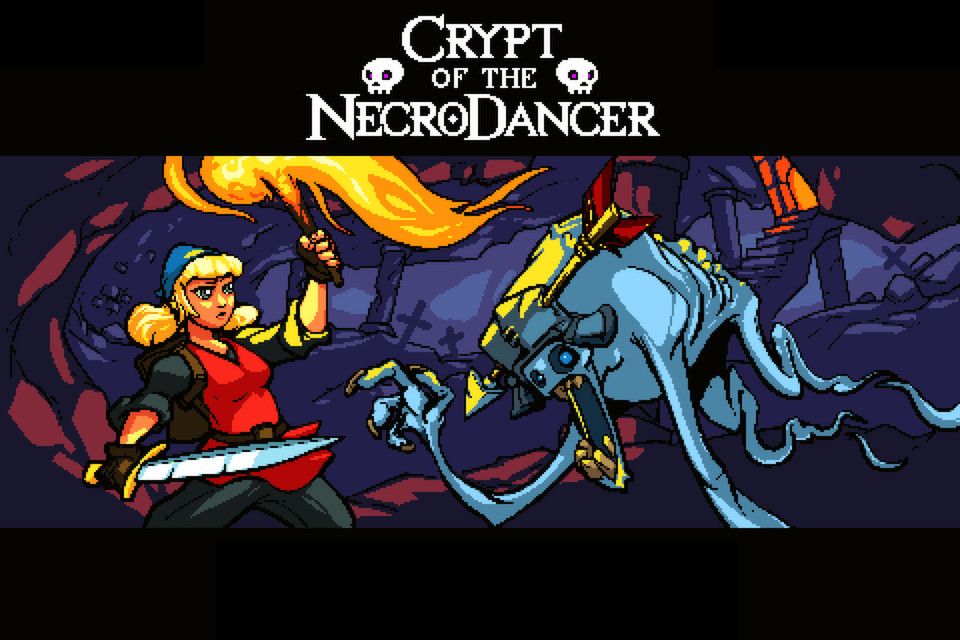 Speaking of forgetting things, I really do wish there was some indication on your character - difficult, given the level of detail we’re working with, but probably not impossible - as to the usable items you currently have equipped; when you can’t take your eyes off the dance floor for minutes at a time, it’s easy to forget that they’re there. The game helps a little bit with its UI design, but I still find a vast number of my runs end with me staring at the ‘game over’ screen, realising that I could have made it out alive if I’d just remembered I was capable of casting the Deus Ex Machina spell. Still, at least I knew what the Deus Ex Machina spell did when I picked it up. That’s one nice feature that sets Necrodancer apart from a lot of other roguelikes and usually goes unappreciated: you can actually play it without constantly diving into the codex or having the wiki permanently open on your other monitor. Moving next to an item will momentarily show a description of its functionality - often a proper concise description too, not the cryptic nonsense that Binding of Isaac teases you with - and while the input combinations for activating equipment aren’t always intuitive, the game does have the decency to spell them out for you as part of the UI. Some item descriptions are still a bit obtuse or simply consist of “???”, but I suppose it can’t hurt to have a bit of an air of mystery here and there. 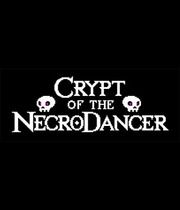