What would you get if you took the fundamental aspects of the mobile gaming sensation Angry Birds, and fused it with a tower defense game, while adding some humorous references to geek culture for good measure? Well, chances are you’d get Zen Studio’s Castlestorm. The game is available on nearly every modern console under the sun, though in this review, the focus will be on the console versions. 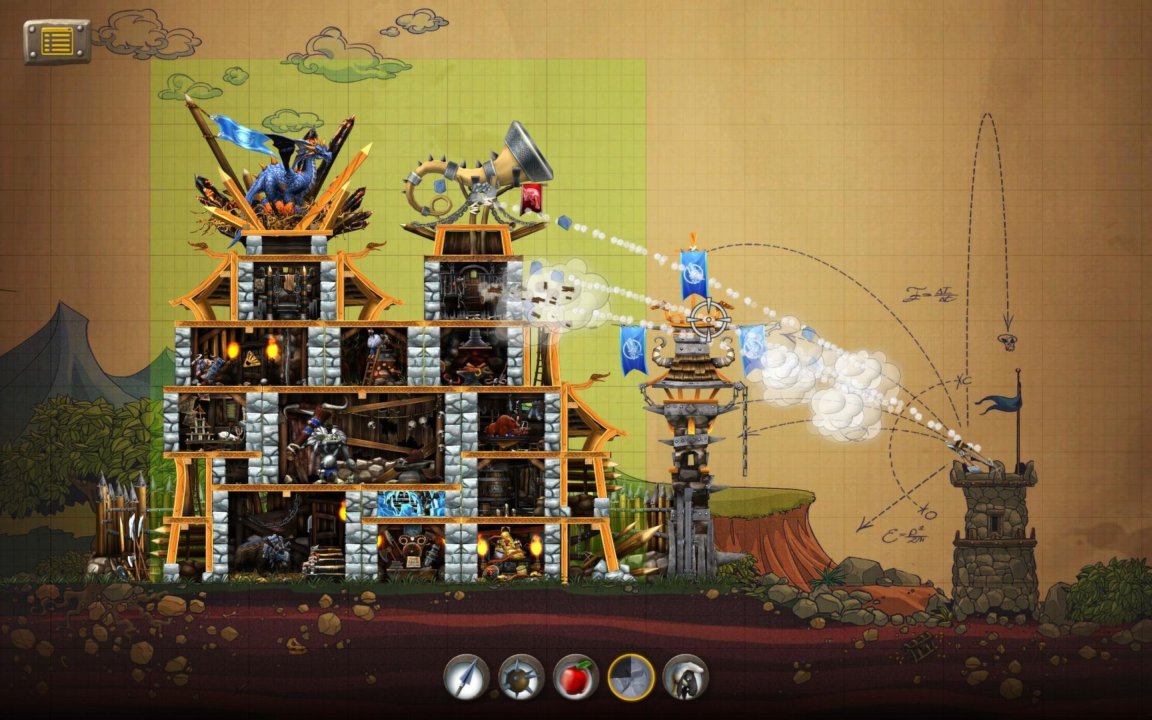 I wasn’t exactly sure what to expect upon delving into this quirky looking tower defense-esque game, though I very quickly found myself enjoying its addictive gameplay and relatively straightforward mechanics. While there is surprisingly quite a bit of depth in some respects in terms of both strategy and content itself, the meat and potatoes of Castlestorm is essentially the angling and firing of projectiles, which will certainly feel familiar to any Angry Birds player. This mechanic will serve as your primary weapon against both enemy soldiers and their castles alike, and luckily, this also happens to be the most satisfying and fun aspect of the game.

The projectiles that you fling relentlessly at your opponent on the other side of the screen will range from spears, to stones, to bombs, and even sheep that use deadly flatulence as a toxic weapon. While this firing mechanic is quite simple to wrap your head around, it doesn’t exactly seem catered to home console controllers. During the slow but persistent march of enemy hordes coming for your fragile castle, you may find it difficult to consistently react in the split-second timing this game often requires to line up your shots as well as you’d like. The control feels a tad overly sensitive and difficult to pin down in this regard. At times, this proves to be an issue in a game that requires quick action and perfect precision, as you attempt to go for those bonus-granting headshots. This proves even more difficult in hard mode, where you are deprived of any sort of trajectory guide. The game attempts to rectify this lack of precision by allowing for tiny refinements on the aim of your ballista via the d-pad, but amidst all the chaos which can escalate in a hurry, and the often swift enemies, this proves to be of little help more often than not.

With that said, the ballista is still very fun to use, and you will likely find yourself resorting to it often, as it will help you earn countless enemy deaths as you hold up safely in your fortified castle. You will also need it to achieve what is usually the primary objective, which is to reduce your opponent’s castle to nothing but rubble.

Aside from the sometimes awkward control however, there is still another bit of a setback to your otherwise deadly ballista, and that is the cooldown time, which varies depending on the strength of the projectile. These burdensome cooldown times can be shortened by getting upgrades after you’ve earned enough gold. 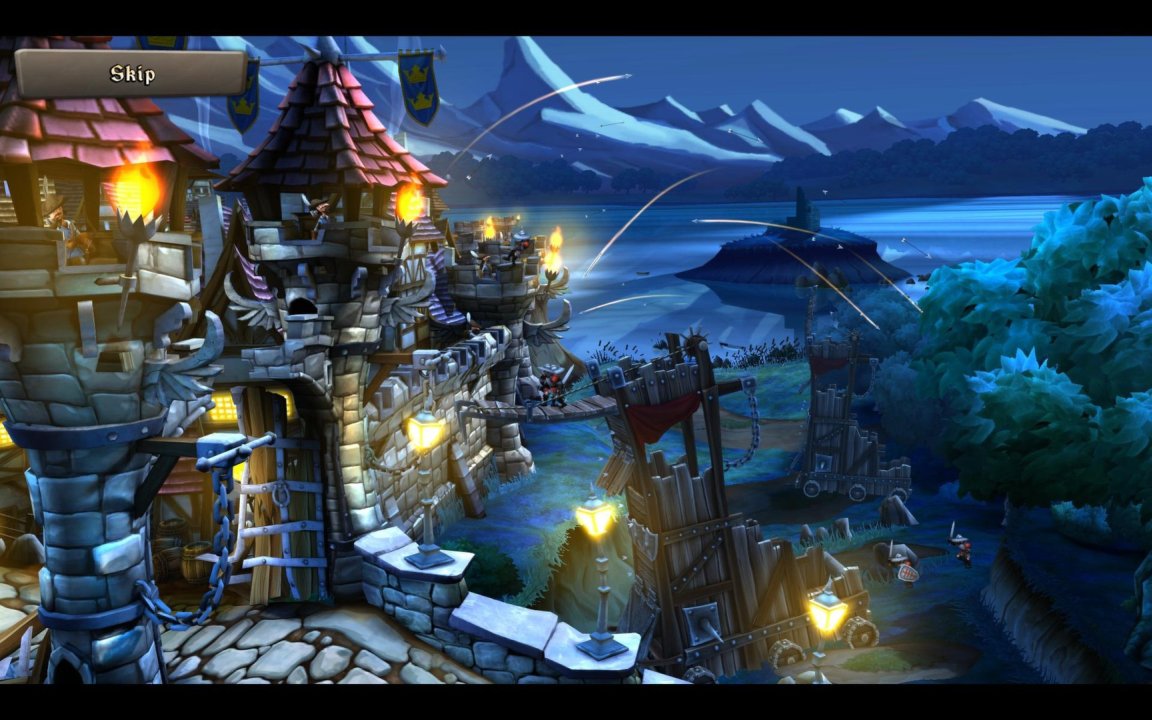 Gold is vital as it acts as your in-game currency with which you can beef up your castle, troops, and weaponry, through purchases during the campaign. This is where Castlestorm gets far more in depth and takes on more of a tower defense approach, as you are provided with a system of progression not that unlike an action RPG. The amount of riches you earn are quantified by the quality of your battle performance. In-game achievements such as headshots and kill streaks, for instance, will give you an always helpful boost in gold.

There is even the ability to call forth a controllable “hero” during your epic battle, which draws some parallels to a typical action hack n’ slash, and reminded me a bit of Warcraft 3. Slaying enemies with your hero is a fun experience in its own right, adding even more depth to a game already packed with content for its price, though it does leave a bit to be desired. For each hero, you are limited to what essentially amounts to a ranged weapon, a normal attack, and a super-charged attack, which gets a bit tedious. Though, generally you will find yourself perishing with your hero much quicker than you’d like anyway, before being quickly shifted back to controlling your ballista.

As you progress, in the same way that your weapons become increasingly epic and satisfying to use, so too do your forces that are ready to fight at your beck and call, particularly when playing as the more fun Viking faction.

With respects to your troops though, much like with your hero, you’ll often find that they too could be wiped out rather quickly with a well placed hit by the enemy or an overpowered projectile. Even my army of beast riders and dragons were being taken out pretty quickly, which clashes a bit with how invincible they are made to look. It seems clear that Zen Studios wanted to put greater emphasis on the ballista, which is not necessarily a problem, though it may alienate some tower defense fans. Personally, I did have more fun - and plenty of success - focusing on this weapon more exclusively, rather than trying to juggle multiple tasks and worrying too much about my ground forces.

The nitpicky complaints aside however, at the end of the day, this is an enjoyable title that I found myself returning to again and again. You can find yourself investing a surprisingly great deal of time into what appears on the surface to be a very simplistic mobile-style game. The campaign mode could probably come as a standalone game, as there are a plethora of stages, which you are given some incentive to revisit to attempt to bring your score up and earn more gold. There are even side missions sprinkled throughout which involve simple objectives like taking out a pack of boars, but these prove to be enjoyable in their own way, and can also help you gather extra cash. 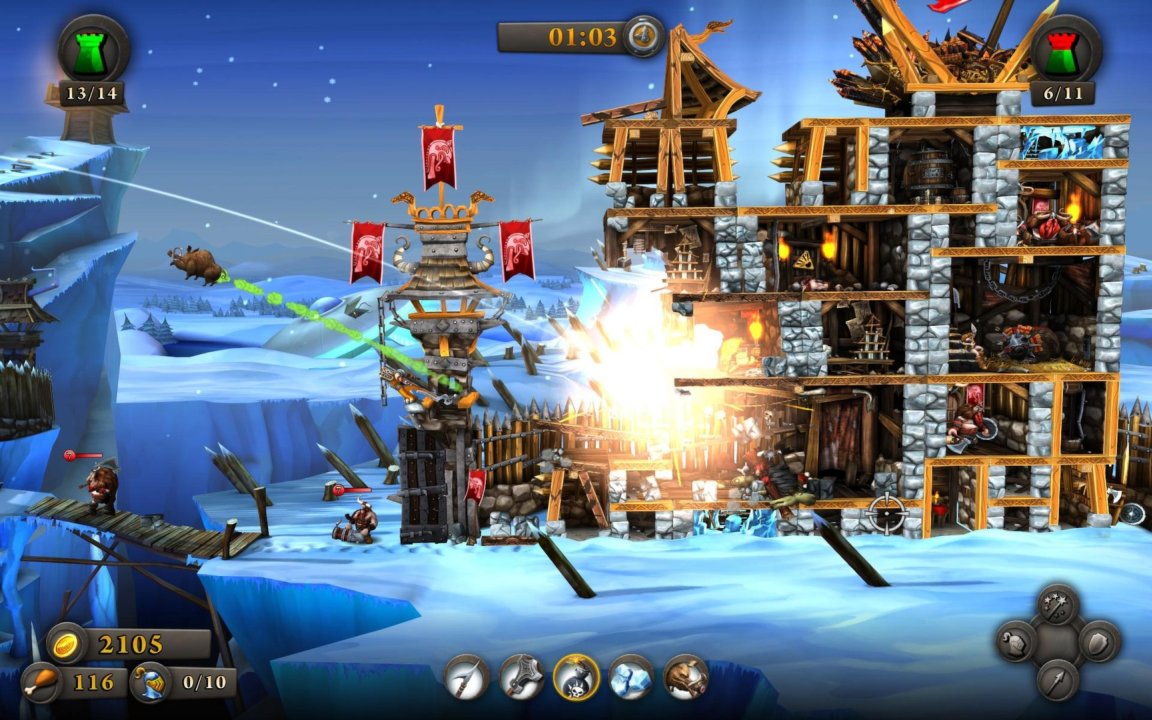 You’ve also got a hack n’ slash style survival mode where you battle with your hero exclusively against hordes of baddies, and a typical “survive an endless wave of troops” mode that the more traditional tower defense fans will get a kick out of. There is not much to be said about these, as they prove noticeably more simplistic than the main campaign, but regardless, they help to further flesh out the game and break the monotony, allowing you to experience the game through different styles.

One feature I didn’t expect to see was the ability to build and customize your own castle, allowing for even more depth as you can build around your style of playing - literally. This mode did feel a bit cumbersome and awkward at times, and it seems as that - much like with the ballista - it was designed with either a mobile or PC control scheme in mind, rather than a console controller.

On top of all this, there is a multiplayer feature, where you can duke it out with a friend, or, through a unique twist on a co-op experience, you can take control of the ballista while your companion acts as the military muscle and control a hero, or vice-versa. There is also the ability to play online, though I sometimes found the matchmaking to be a bit lopsided, allowing for the potential for some one-sided and unexciting battles. The other major online element, the leaderboards, are a subtle but neat addition, as they bring some replay value.

The overall presentation of Castlestorm is one of its greatest strengths. Besides the aforementioned plethora and diversity of the content, the game has a charming, cartoony style that resembles a Blizzard game, and pulls it off quite nicely. The look isn’t mind blowing, but it works, and there are some nice particle effects that are subtly thrown in for good measure.

There isn’t much of a narrative outside of the typical “one army goes to war with another, and an epic battle ensues” motif, yet there are some clever little plot threads here and there that cleverly tie into your specific playing situation in various parts of the campaign. For instance, there are moments when you find your ballista cables being chewed up by pesky sheep, so for the stage that follows that cutscene, you are restricted from using it. In another level, your troops are held up from battle as they desperately line up to use the one and only bathroom stall, which means you cannot summon troops into battle that round. These are minor things, yet they help make for a more amusing campaign experience, while simultaneously help mix things up a little through the various objectives. 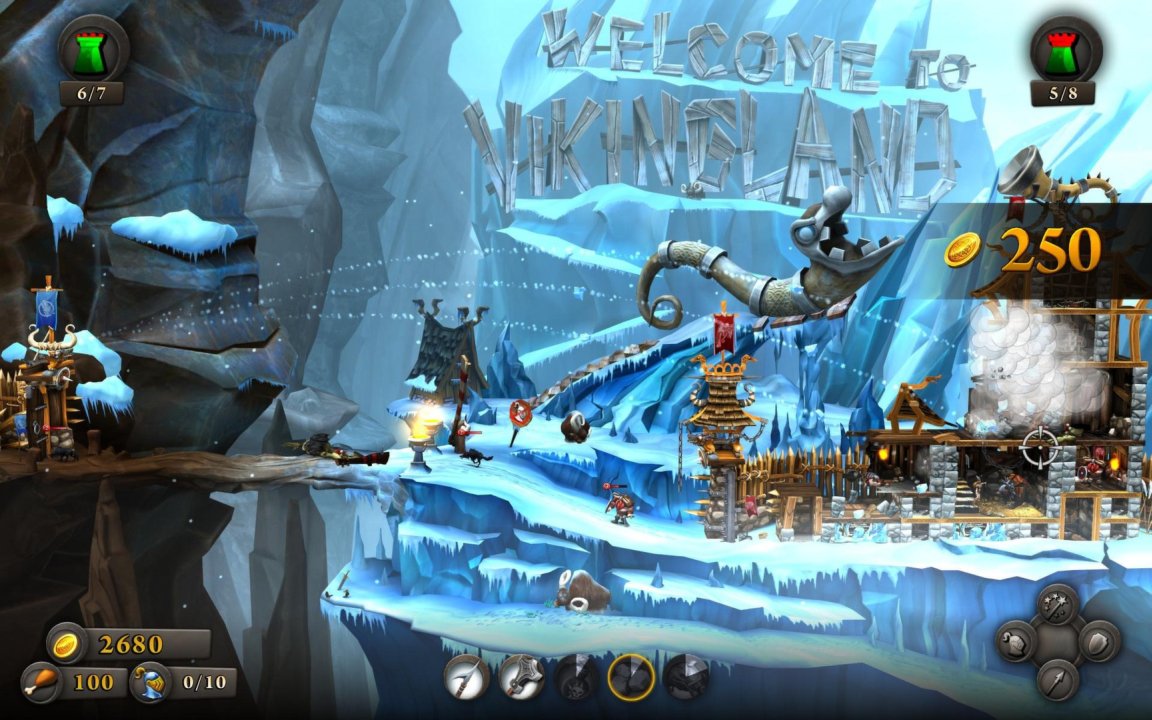 With the brief cutscenes and verbal exchanges throughout the single player campaign comes some subtle humorous nods to various geek culture references, such as the Game of Thrones' direwolves and the mention of taking arrows to the knee. These sorts of details are amusing and help to fill out the void left by the lack of any real narrative.

The game’s music consists of a sort of pseudo-classical melodies that generally range from upbeat and cheery tunes that you may find yourself whistling along to, to more epic sounding performances that help to set the mood in the heat of battle. The music certainly fits the overall tone of the game and compliments its lighthearted nature and medieval fantasy setting very well. The voiceover, while used sparingly, is well done, and adds a nice touch, as it helps bring a bit of character to some of your soldiers and heroes.

While this game is far from perfect, it is still one of the more entertaining and unique tower defense games I’ve experienced in awhile. In a genre that has had many titles similar to one another being cranked out on a semi-regular basis, to the point where the games are getting a bit stale, Zen Studios has accomplished a difficult feat in standing out amongst all the rest. It holds one of the fundamental qualities that makes for a good game - it is easy to pick up and play, while offering plenty of depth and elements of strategy for those who wish to delve deeper. I certainly found myself wanting to do just that after playing through Castlestorm.

Our ratings for CastleStorm on Xbox 360 out of 100 (Ratings FAQ)
Presentation
81
The visual style is nothing groundbreaking, but the simplistic cartoony style meshes well with the simple and lighthearted nature of the game. Likewise, the music and voice acting isn’t at the forefront, but nonetheless proves well crafted.
Gameplay
76
The fundamental mechanics provide much fun, and are easy to get into, yet the multitasking of bouncing around from hero to troops to ballista can be a bit jarring at times. The joystick control for what seems tailor made for a touchscreen or mouse also takes some getting used to.
Single Player
85
The core of the game, and its best quality. The main campaign is several hours long, with the added incentive to replay levels thanks to the ability to keep earning gold and high scores. There are a variety of other single player modes to help mix things up.
Multiplayer
65
It’s nice that this feature is included at all, and the co-op is a fun addition, but compared to the robust single player options, the multiplayer is noticeably less varied. The matchmaking can be lopsided at times as well.
Performance
85
The framerate is smooth and the load times brief.
Overall
76
Castlestorm is an addictive and charming tower defense title that, despite a few minor faults, stands out from many of its ilk. With surprisingly deep and plentiful content, and easy to learn mechanics, this one is worth checking out. 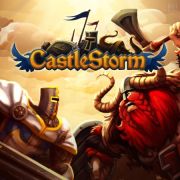 Our Review of CastleStorm
76%
Good
The Verdict:
"A charming tower defense game that stands tall"
Game Ranking
CastleStorm is ranked #729 out of 1739 total reviewed games. It is ranked #67 out of 158 games reviewed in 2013.
728. Ghost Recon Wildlands
PC
729. CastleStorm