A World of Tanks

One of my favorite games of the seventh console generation - and I still believe it would have flourished had it come out a few years later - was the strategic mech combat game Chromehounds. Vehicle and mech combat is cool in on its own, but there’s something about being able to pick and choose weapons, hulls, transportations methods and more, that really clicked with me. Unfortunately the lack of a community led to the game’s early death, and there hasn’t been much in the same vein since. Given that, you can imagine my elation when I was presented with Gear Up, a vehicle combat game that tasks you with building a (admittedly adorable looking) death tank and blasting all who may stand in your way. 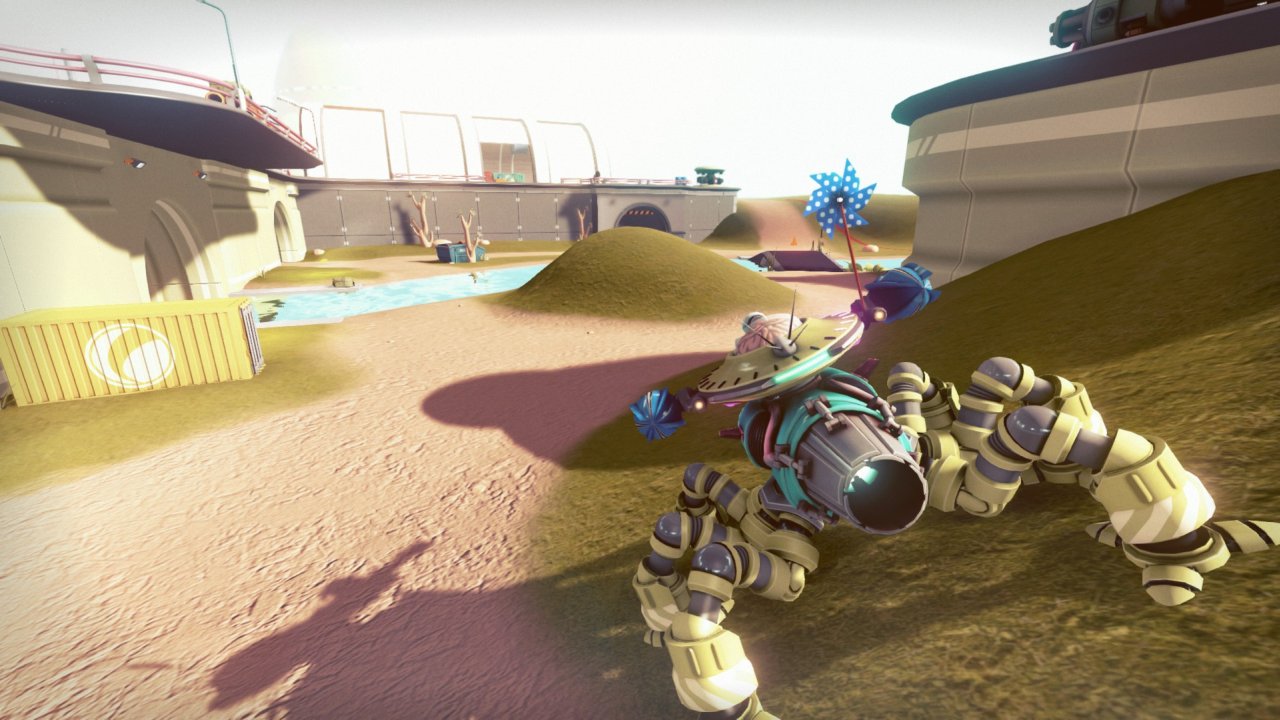 Gameplay itself in Gear Up is incredibly straight forward. There are only a small number of game modes, and most matches that you’ll actually find populated with players are straight death matches (team and solo). Drop into the game, run around, and fire your weapons as much as possible. There’s isn’t much in terms of deep strategy or complex mechanics - it’s an arcade style arena shooter through and through, meaning you’re going to be doing a lot of running, gunning, and dying. Matches are nicely paced. You won’t really find anyone camping and you’re always only moments from an enemy, which makes it a great game to pop into for 15 minutes here and there for some quick adrenaline. There is an offline mode against bots, but it should largely be ignored, and is not satisfying enough to replace the unfortunately sparse online community. Bots are fairly predictable, and losing the interaction with the surprisingly welcoming and helpful players you’ll be able to text chat with during matches is a big negative.

As I alluded to earlier, one of the biggest draws of Gear Up is the pretty vast customization options. Want a sleek chassis with nimble hover pads, a buzz saw, and two mini machine guns? Go for it. Want a big, nasty bruiser with a giant cannon, treads, and defensive boosts? Knock yourself out. Tiny stable sniper with legs and invisibility more your style? It’s yours. There are only a few weapons, most notably the buzz saw and other close quarter weapons, that largely don’t seem to have any competitive place as they’re too easily taken out from afar by their gunpowder blessed brethren. At first the options seems almost overwhelming, and it’s actually disappointing that the game doesn’t do a better job of describing what exactly everything does. The difference between certain parts, especially some of the secondary slot options, is hard to grasp. Thankfully you’re always only a few clicks from the test field, but even there some items don’t have obvious function outside of a live match. All it would take is a few sentences in the tank builder UI to clear things up and save players some testing time. 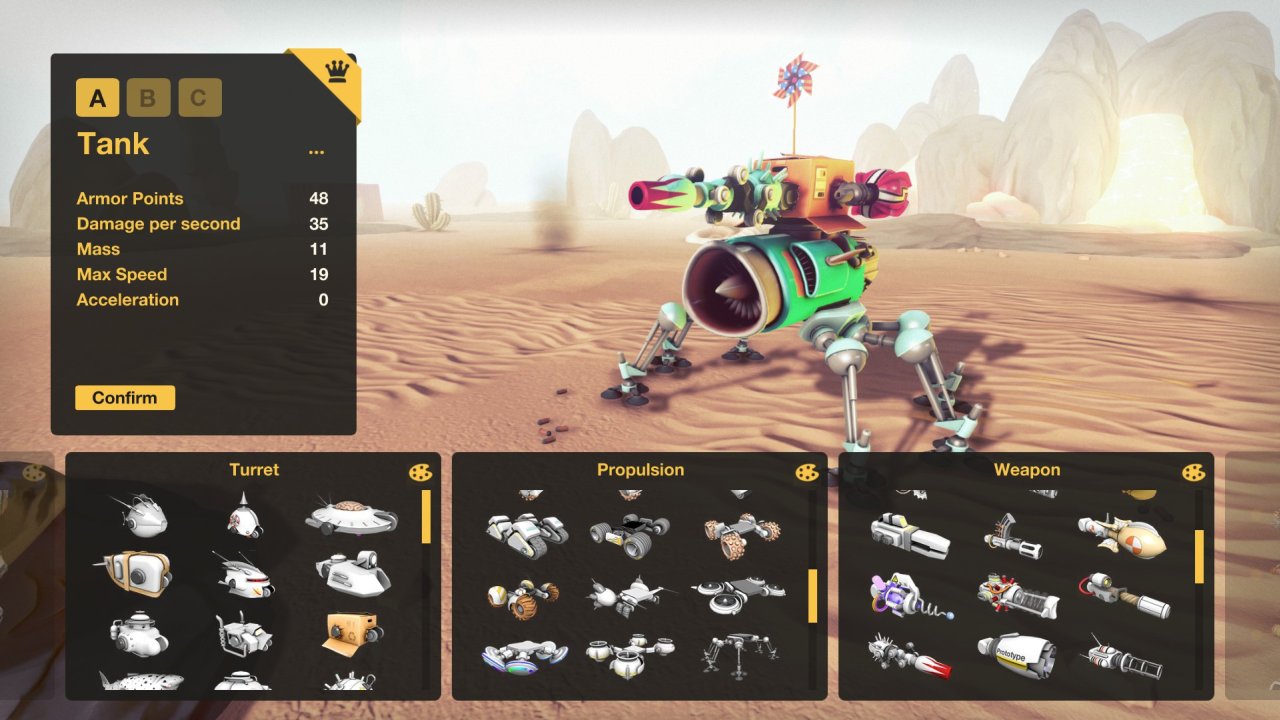 Unfortunately the initial wonder of the vast ocean of customization will soon wear off as, at the end of the day, there really are some “best options.” At least that’s what it will seem like playing online, where you’ll start to notice that there are really only a few permutations dominating the leaderboards. Snipers with cloaks and legs, and beef tanks with gatling guns and treads. Every match will have at least one or two of each, and they’ll almost always be on top. There really isn’t a reason to give your juggernaut tank legs or glider wings, and a sniper isn’t going to gain anything from trying something more unique. Of course, if competitive performance isn’t your top concern, you’re more than welcome to go crazy, but you’ll be at a slight, though noticeable, disadvantage from those following the more traditional route. It should also be noted that this review was done with the 20 dollar version of the game, which has all vehicle parts unlocked from the start. There is also a $10 and free-to-play version, but, without playing them, I cannot comment on the quality of their initial unlocked content or other limitations and restrictions.

Gear Up’s graphics are definitely dated from a purely technical standpoint, but their almost Dr. Seussian visual design and bright color schemes - both in the environments and the vehicles themselves - make things generally pleasing to the eye. Speaking of maps, the available maps are all fun to play on. They forgo any attempt at realism for large, abstract arenas that do a nice job breaking themselves up to promote different encounter types. Most of the maps have a nice mix of more open areas for fast travel, ramps and hills to block lines of sight, sniper perches, and other geometric obstacles that give everything from the zoomiest of snipers to the most sizzling of flamethrowers a place to shine. Unfortunately the sound doesn’t benefit from quite the same quality, coming across not poor, but instead incredibly “fine.” No sounds or music really pop, and the weapons generally sound fairly weak and airy. 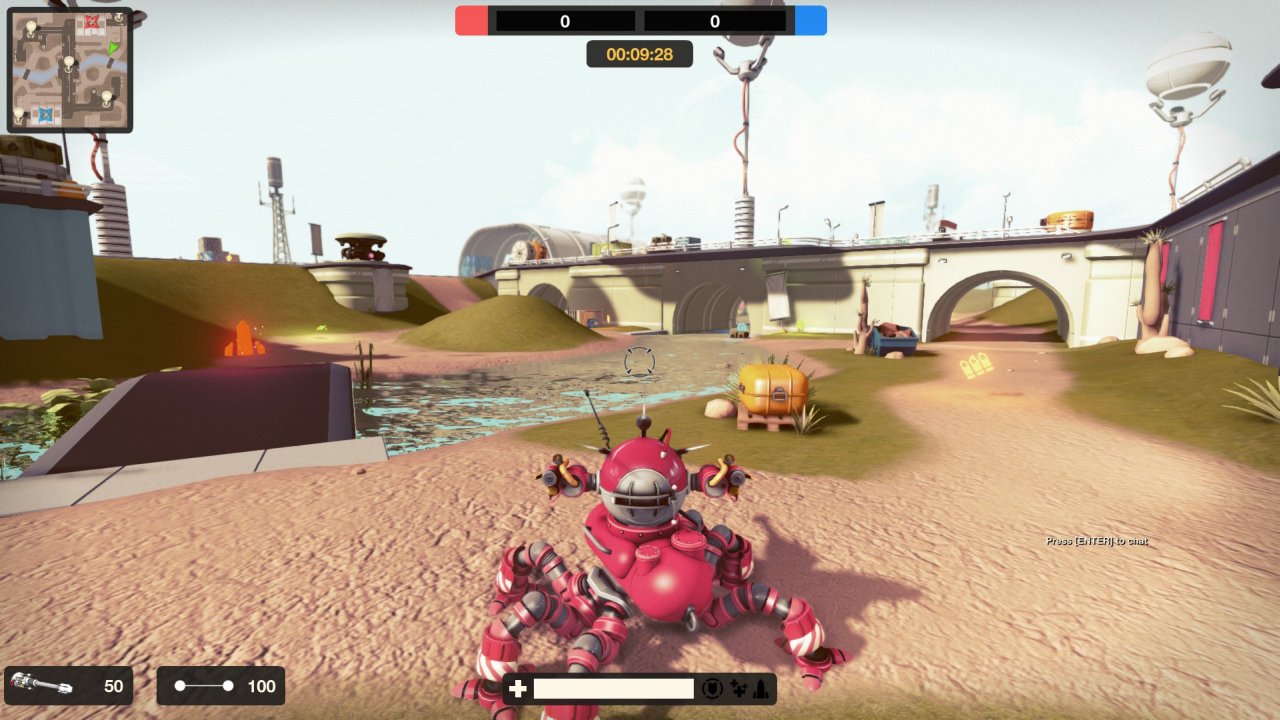 Gear Up is a game that simultaneously thrives and dies by its customization. Much like Spore’s creature creator, it’s fun to spend time just toying around in the tank builder and seeing what you can come up with. There are thousands upon thousands of permutations possible, which is impressive in and of itself. Unfortunately once in a match, it becomes clear that there are a few combinations that dominate the competitive scene, and with only a few select servers running at any given time that actually have player population, you’ll be seeing a lot of the same things over and over. All in all, given that it really is a fun game for a time, I do think Gear Up is worth a try - especially with a free to play option to dip your toes into first.

Our ratings for Gear Up on PC out of 100 (Ratings FAQ)
Presentation
70
Boring audio detracts from some nice, bright colors and fun visual style.
Gameplay
75
It’s simple, but it works without hitch. I’d like to see tank options get even more wild to embrace the inherent craziness of the game’s concept.
Single Player
60
There’s a single player mode, but it’s clearly just a way to test out tank builds. Player focus should stay on the multiplayer
Multiplayer
75
Matches are fast and frantic, but player population is already very low, and a few select tank builds dominate the scene.
Performance
95
I never experienced any glitches, and once I was able to find a populated game they always went smoothly. Frame rate remained solid and there were no oddities to be found.
Overall
70
Gear Up is a fast paced arena shooter with entertaining customization, hampered by a dying community and dominating vehicle builds.