id Software and Doom are back with a boom. The bombastic and bloody shooter series had an enthusiastic reveal at Bethesda's press conference on Sunday, showcasing the game's setting, its single player and multiplayer experience, as well as the level creation tool "SnapMap". At a special Live Lounge at E3 2015, we caught up with key members of the id Software team and got some in-depth information on what not only is supposed to make this new Doom true to its gory roots, but also set it apart as a unique shooter. 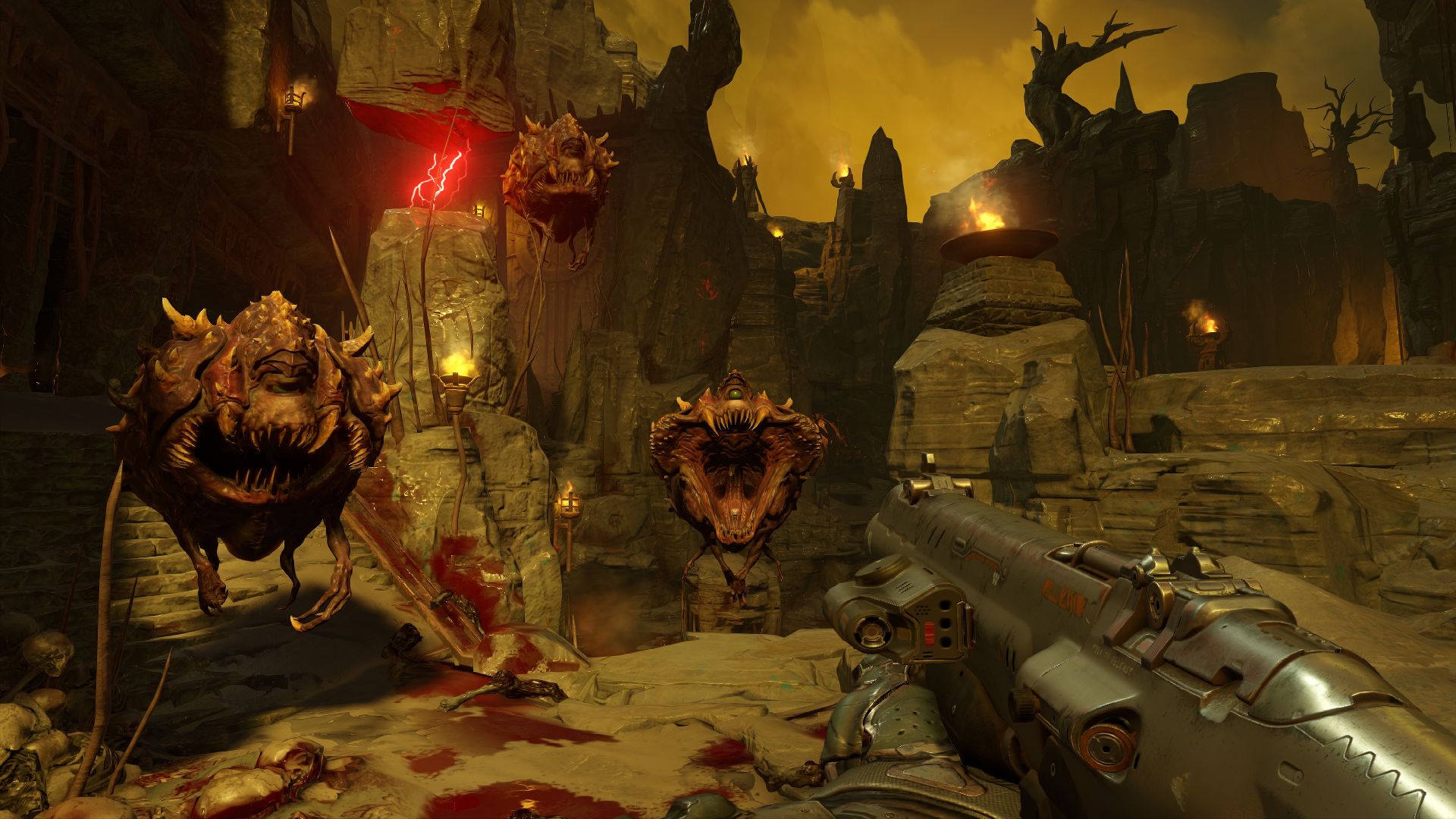 Doom has a huge legacy. There's no denying that it defined a genre of furious and blood-spattered games, with a hellish landscape dripping with an '80s/'90s sci-fi feel. Because of its impact on the scene, fans, undoubtedly, expect a lot from each release. Doom III was praised for its ability to create a genuine feeling of isolation combined with immersive environments, and it's been over ten years since the release of the first game. While it may not reinvent the genre, this new Doom hopes to carve a shooter niche with its new features.

The core tenets of Doom are its speed, style and shooting. The team said that this new Doom had originated when they first had a taste of what they dubbed "Push Forward Combat". Push Forward Combat is meant to capture those core tenets by creating an experience where the player has to continually advance, without a moment to catch their breath. Enemies surround you on all sides across both vertical and horizontal plains, meaning the action is always progressing. The inspiration for this rhythm of play originated with action and martial arts movies, the team likening the game to "Bruce Lee on a skateboard".

To breathe life into the combat style, players have a variety of enemies to contend with. We saw a quick, 1-minute demo that took place in Hell. Through this, we glimpsed this idea of rhythm. Nimble, flying enemies assault you from the air, hulking behemoths with plasma cannons for arms meander towards you, and agile smaller creatures will swarm you. With no time to plan your attack, Doom's single player relies on instinct and on-the-fly strategy. You stop, you think - you die. It's not a cover-based shooter; it's not a corridor shooter. 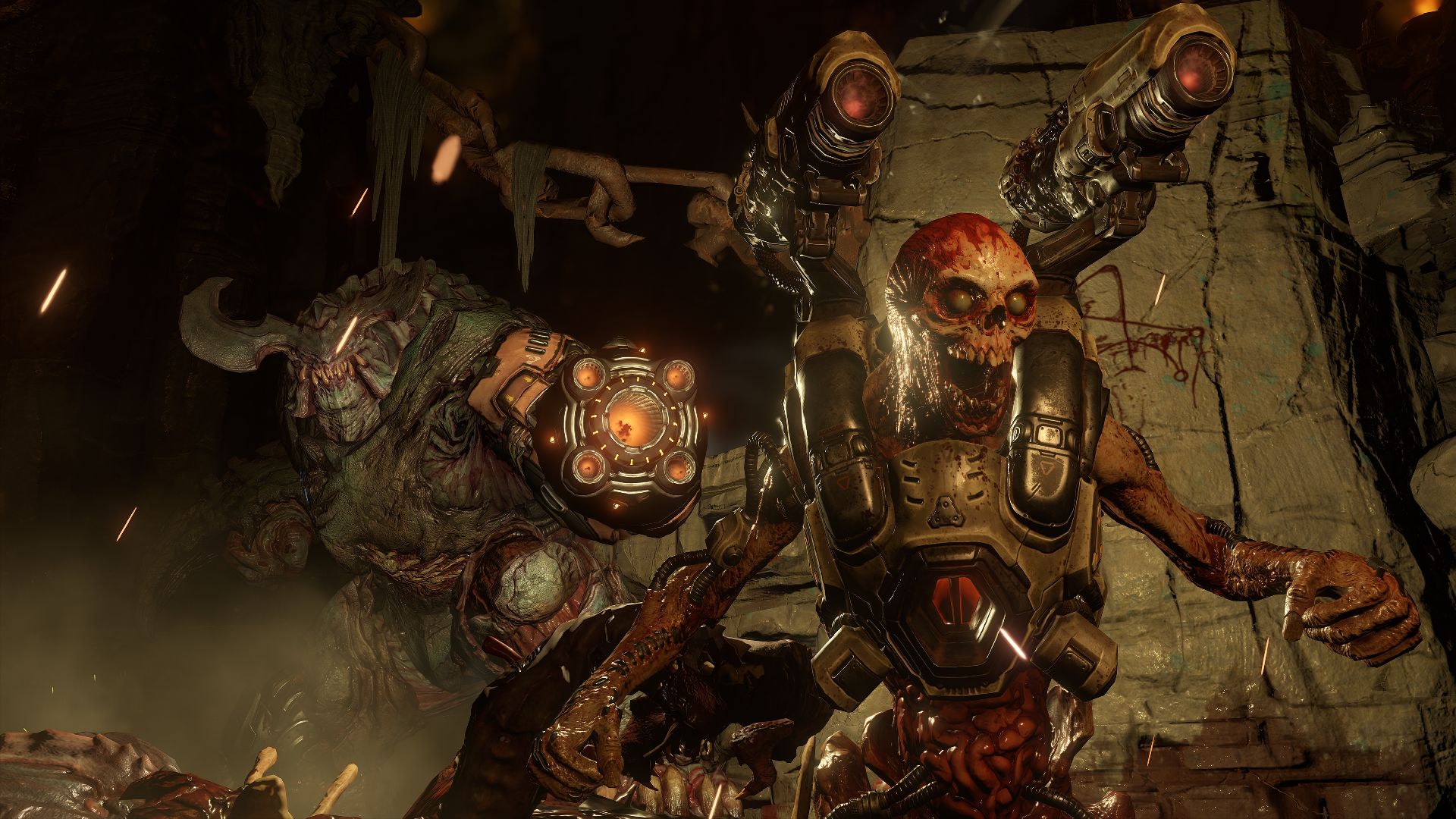 "Verticality" was another word thrown around, which demands you change up your play style. With the ability to dodge, lunge, and surmount your environment while constantly dogged by demons, you have to think fast.

Another layer to the idea of Push Forward Combat is the loot and power-ups that enemies drop. After you've dispatched an enemy by "chainsawing" them in half or disintegrating their jaw with a double-barrel shotgun, glowing health and ammo burst from their remains like a busted piñata. This is designed to draw the player in and keep them moving.

Perhaps the most gruesome of all the numerous ways to dispatch armies from hell is the "Glory Kill". After you've dealt enough damage to an opponent, they will glow as if they have just taken a dip in nuclear waste. That's when you stroll up to them to deal a decisive finisher. One such Glory Kill saw our space marine rip the shining heart out of a rather large demon and proceed to stuff it down his throat. Then you just hop back and watch the thing explode. These Glory Kills have a benefit beyond looking cool - they reward you with more health and ammo. However, the team stressed that these fancy finishers don't detract from the pace of the game, and they took great time - down to the millisecond - to ensure they don't negatively impact the experience. And to ensure players don't get bored, there are a variety of contextual finishers at your fingertips.

As for the AI, we were told that they won't be going easy on players. The spawns of Satan are there to gnash at your heels, give you no quarter across any terrain, and force you to switch up your play style. One of the team claimed they were stuck at one checkpoint for over an hour, praising how Doom forces you to adapt to not only your environment but the difficulty mode you're playing on. 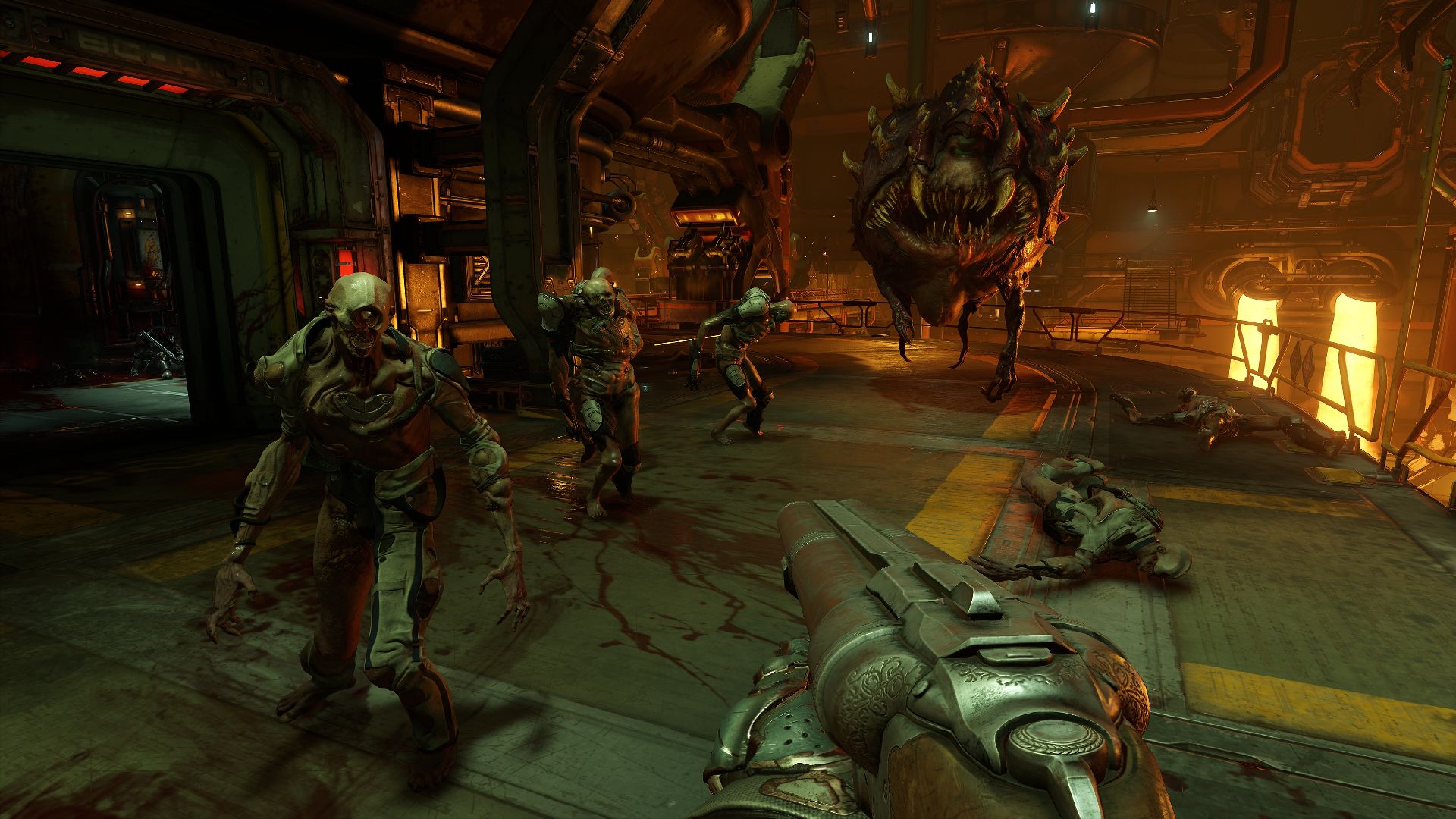 Multiplayer is now seen as an integral element for any shooter worth its salt (or brimstone). For Doom, the aim was to take the idea of Push Forward Combat and make those skills transferable to multiplayer. There are several modes available: Domination, which is your standard team-based experience. Clan Arena, dealing with waves of enemies, and Freeze Tag. In these modes, there are a number of power-ups. Most interesting of all are the abilities that allow players to turn into the demons they face. You can, for instance, zip around a map as a flying monster, raining plasma on your foes. However, in what we saw, this demon ended up having his skull crushed by a rival marine.

To enhance the multiplayer experience, Doom's new "SnapMap" is set to allow players to create their own single player and multiplayer levels so that you can dream up nearly any scenario you like. With a simple interface, which is supposedly as easy as connecting pieces of map together like Lego, you can also litter levels with obstacles, traps, monsters and different rules and weapon load-outs. You can even tweak the enemy AI to do your demonic bidding.

Looking under the hood of the new Doom, you'll find the idTech 6 engine. The team have said this is their best game engine yet, set to deliver a 60fps, 1080p experience across all platforms, complete with dynamic lighting.

The idea of fast and furious combat is what made the original Doom games such genre-defining experiences, and it seems that this new iteration captures what made the previous entries memorable. The SnapMap looks like a great way to enhance the game and provide longevity, and it shows more and more teams putting content creation in the hands of the players. However, with a game like Doom, it's always better played and not shown, so we're interested in how it will actually play. We're hopeful that this journey into hell will remind us why Doom should be the good kind of nightmare. You can expect to see Doom on PC, PS4, and Xbox One in Spring 2016.

All videos for Doom (9)
Advertisement ▼