What does the world feel like, then? Well, if you're like me, and were more partial to Deus Ex back when it was moody, dark, and not obsessed with putting yellow cellophane over the camera lens, you'll eat up Neon Struct's dimly-lit concrete Brutalist dystopia with glee. Its spaces feel cold, uninviting, often impossibly sparsely furnished, clearly created with utility in mind, and while you could consider that an accidental by-product of there not being much actual detail to work with - five tables and a counter don't make a restaurant, unless the high-class party trick of the alternate-present is using nanomachines to condense food out of thin air - I'm prepared to give it the benefit of the doubt. Not too sure about using the voxel-y level geometry again though; yes, yes, it kind of fits the imposing concrete-and-glass aesthetic, but without the randomly arranged environments or destructible terrain of Eldritch it does feel a bit unnecessary. Hints of a future level editor have been dropped, though, so maybe it was just a considerate choice to save potential modders from the hair-tearing horrors of vertex editing. 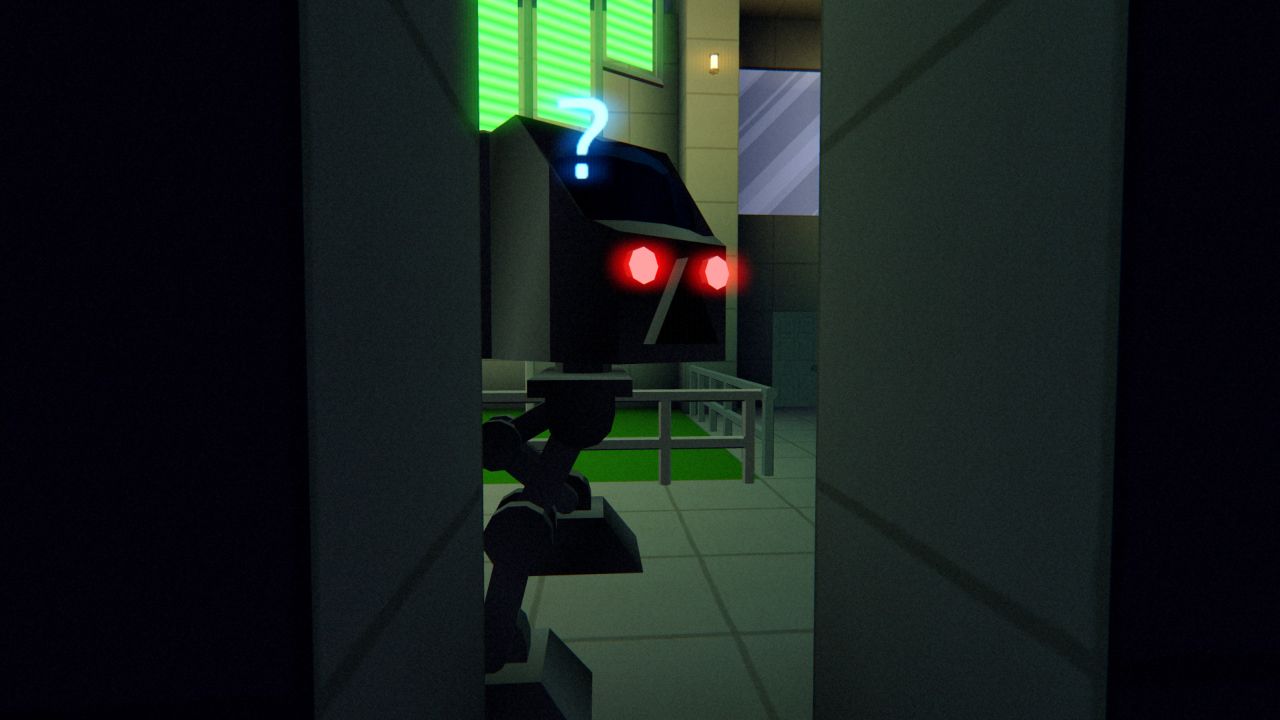 Then again, when it comes to the immersive sim, champion of games that you can sink into like a big, warm, soapy bath, what you hear is as important, if not more, than what you see. Neon Struct’s sound design is, like much of the rest of the game, is a bit on the minimalist side. A lot of thought has clearly gone into it, from the Thief-like policy of amplifying gameplay-relevant sounds over background guff, to the distinct Metal-Gear-Solid-esque beeps that guards make to indicate their alert status, but while it's nice that the game is doing everything in its power to make its soundscapes nice and readable, at times I feel like it almost goes overboard on this: NPC footsteps travel so far and so effectively, seemingly unaffected by piddling interference like, say, concrete walls, floors, or doors, that sometimes all you can hear is a staccato cacophony of shoes on tiles from everywhere in a thirty metre radius, a sound that I am now certain will play in my own personal hell. Aside from the requisite background white noise that permeates all the good Thief games, there are precious few ambient noises to bring life to the environments, and outside of peaceful zones between missions there isn't any ambient music either. Eldritch compensated for its papercraft Lovecraft monsters with a catalogue of groans, wails and suspicious bubbling noises, which actually made for some pretty atmospheric skulking around, but Neon Struct might as well be taking place in a series of deathmatch arenas. Some sounds are just missing altogether: the big stompy robots in later levels being audibly indistinguishable from ordinary guards ended up leading to multiple faux pas and at least one “oh, sorry, excuse me” .

Furthermore, as pleasing as it is to see Neon Struct pick up the Thief formula, dust it off and turn it into something fresh, there are a couple of elements I'd rather had remained in The Bonehoard, as it were. Scrolling carefully through the contents of your inventory one at a time, Thief-style, is all very well when you've found a nice dark corner to hole up in, but when things get hairy - usually in the exact kind of tight spot that a well-timed gadget might actually help you out of - using the thing you want in a hurry is like trying to operate a Rolodex in a wind tunnel. That's not to say there aren't places where the game improves on Thief, though; I like how it bypasses all that 'lethal or non-lethal' guff with ambiguous terms like 'takedown', leaving it up to your imagination whether that wet thump signifies a guard going home with an egg-sized lump on their head, or a neck that now resembles a stick of chalk in the grip of a P.E teacher. 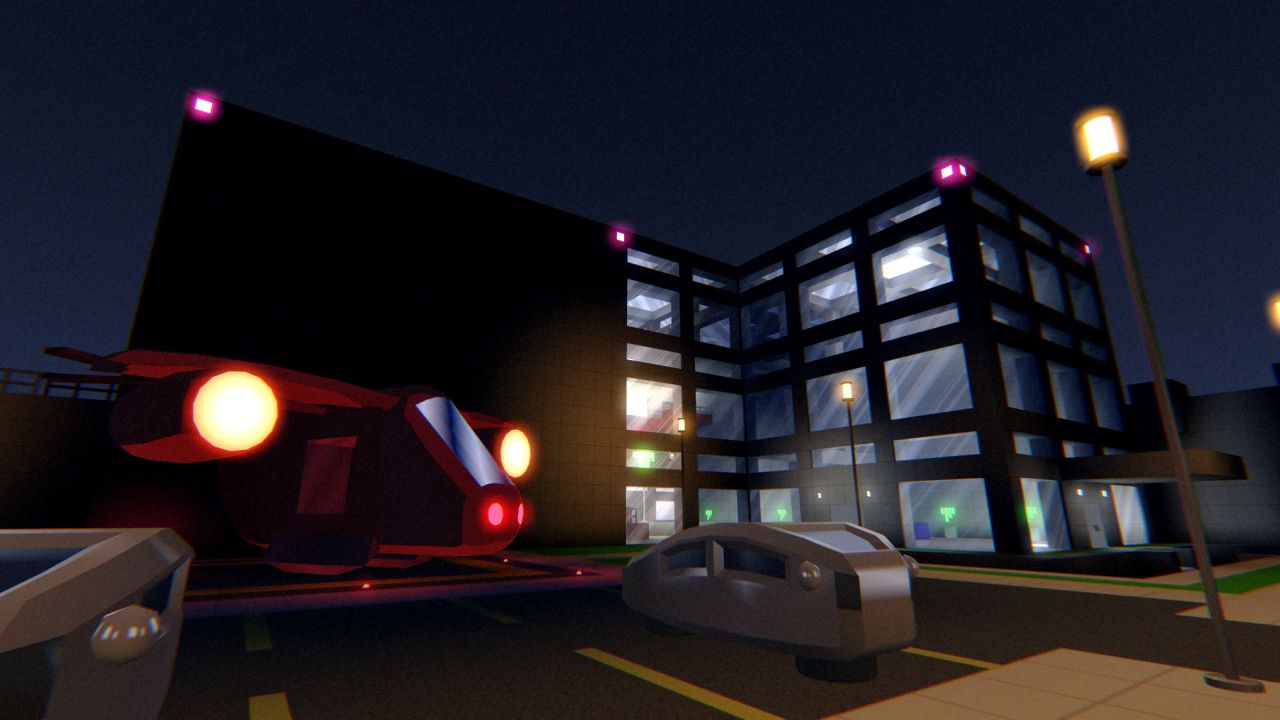 Let’s polish things off with the story - or at least, what story there is. While the game's world-building does a pretty good job of getting its issues across - supported by news terminals, NPCs, memos, that sort of thing - the narrative itself is kind of forgettable and strung-together. You spend nearly half the game just on the run, ricocheting between characters with roles as significant as mid-game GTA mission givers without any real goal in mind, and even once you have a distinct overarching objective very little actually occurs. It's like in Deus Ex where you couldn't even take the subway to Hell's Kitchen without being inescapably embroiled in several relatively inconsequential missions; the difference being that Deus Ex was a globe-spanning saga with at least four distinct acts, while Neon Struct is short and sweet enough to be happily polished off in an afternoon. Can't dawdle when you're working with that kind of timespan, Jillian.

The ending's a bit anticlimactic too, mind: you basically just pop up to the local news station, tell the director what you plan to do and what part of your discoveries he ought to publish, and then the credits pretty much roll. It’s a long way from fusing with Helios or plunging the world into a second Dark Age from a bunker deep below Area 51, but perhaps for a more grounded cyberpunk plot it’s more appropriate; the idea that sweeping, radical changes to society happen thanks to the ideas that the media we consume put in our head, not wild heroics happening somewhere off the grid. I can also appreciate the moral choice that the game throws at you right at the end to tie all its issues together - an actual difficult moral choice too, not a big lever with one side marked 'friend to all living creatures' and one side marked 'Konami upper manager' - but it's a bit wasted considering that you don't get to see the results of your actions. Remember how Human Revolution ended with Adam Jensen dryly narrating over a silent documentary and telling you why you're such a smart cookie for picking the option you picked? Well Neon Struct is more like the end of one of those old movies where they tell you what happened to all the characters five years down the line, except instead of stock footage and actors in slightly unconvincing ageing makeup, you just get a post-credits sequence where you wander around in VR and get text dumps from statues. 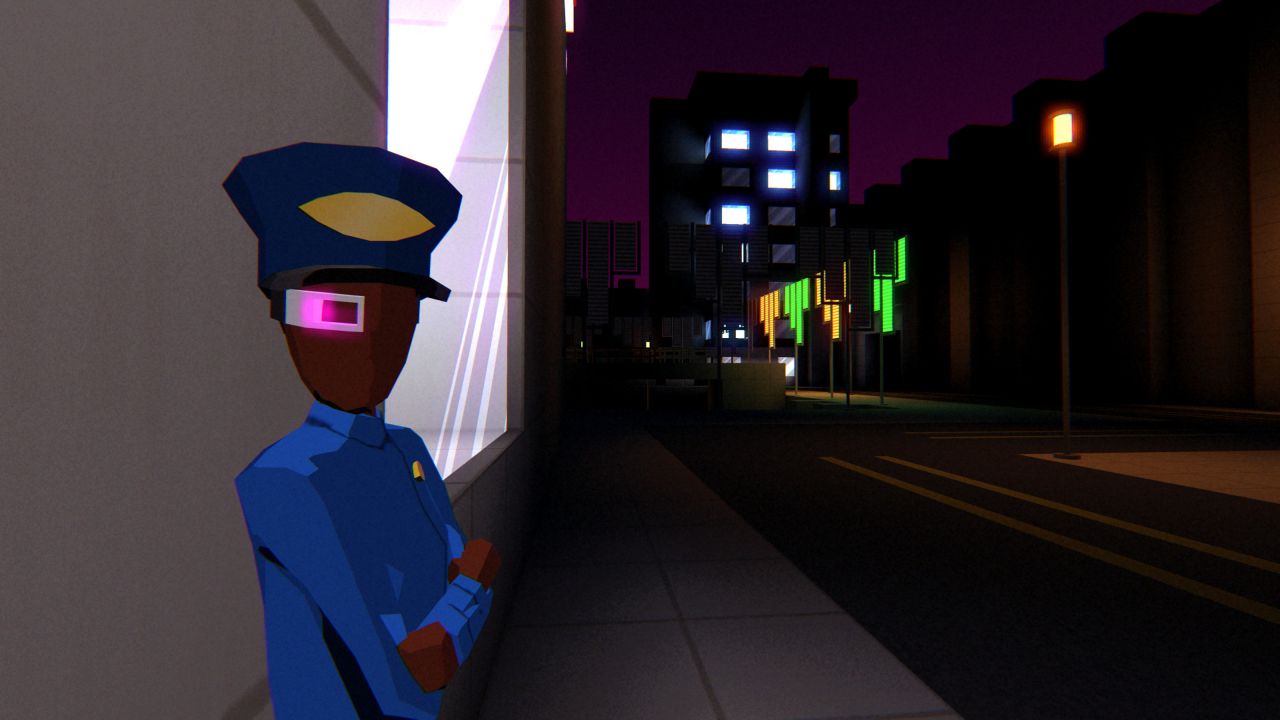 Neon Struct is not a revolution by any stretch of the word, but a faint echo of a revolution that we’re still struggling to learn the lessons of. Countless games have built on Thief’s mechanics, elegantly incorporating them into their own systems or simply lashing them to the side with bungee cord, but few have been able to grasp its unmistakeable feel, an intangible quality composed of so many small, subtle features; the sound design, the pacing, the tension of involuntarily sucking in your gut as a guard patrols inches past your face. Neon Struct doesn’t master that feel either, but it comes closer than any game I know.

In short, it’s a minimalist Looking Glass game, and if that’s not praise then I don’t know what is.

Prev12
Our ratings for Neon Struct on PC out of 100 (Ratings FAQ)
Presentation
67
Not much of a looker, obviously, but it effectively constructs faceless, cold architecture with a dusting of lurid eighties colouring where it counts. Music fits the atmosphere brilliantly, but you never get to hear it during actual missions unless you balls-up.
Gameplay
78
Plenty of games have pulled off Thief's mechanics before, but only Neon Struct, as far as I can remember, has gotten so close to the feel, the flow, and the level design as well. A bit slow and a mite easy for my tastes, though.
Single Player
67
The plot itself doesn’t really go anywhere and the ending is like being slapped with a damp towel, but it actually raises some pretty serious questions here and there. Characters feel disposable and lack distinct personalities.
Multiplayer
NR
None
Performance
(Show PC Specs)
CPU: Intel i7-870 @ 2.93 GHz
GPU: Nvidia GeForce GTX 760
RAM: 8GB DDR3
OS: Windows 7 Premium 64-bit

90
Smooth framerates, decent configuration, no obvious bugs except the very occasional confused AI. Sturdy as a brick sh— I mean, a brick house. Made of bricks.
Overall
77
If the words 'cyberpunk stealth immersive sim' make you weak at the knees - and they ought to, really - you’ll find Neon Struct to be a fun little tribute to the games that made those words special.