Klei Entertainment proves its worth in stealth gameplay once again

When you first say it out loud, it feels like an odd mashup: “turn-based stealth gameplay”. It’s right up there with “first person rhythm game” or “survival horror puzzler”. But as soon as you start playing Invisible Inc, you realize that the two genres were never far apart to begin with. In classic turn-based, grid-based combat (think X-Com or The Banner Saga), all the basic elements of stealth are already there, like the dire need to know your enemy’s position, or the importance of line-of-sight. Tweak a few points here and there, and focus the game around avoiding combat, and then you’ll wonder why this particular form of stealth shows up so rarely. 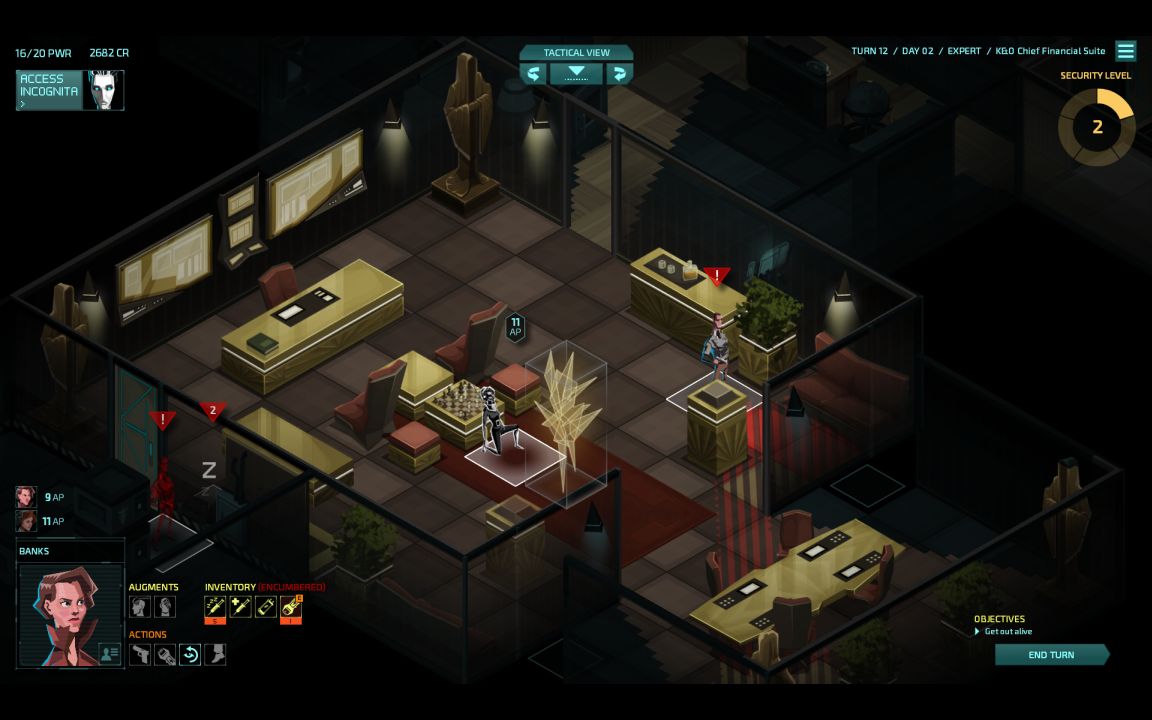 The most basic aspects of Invisible Inc should be familiar: gameplay takes place on a grid board, with furniture objects acting as cover. Characters may move based on how many Action Points they have. When described on paper, the game might seem a bit too easy at first. Guards generally have no peripheral vision: they will walk right past you if you stand by the door they’re coming through. Get a glance of a guard, and all it takes is a single AP point to accurately ‘observe’ him and plot out exactly what his next move will be. On top of that, Invisible Inc boasts a hacking system that adds a lovely layer of depth to the gameplay. Hacking costs energy points, some of which can be gathered within the level itself, and some of which can be generated by special abilities. Generally speaking, the player will need to pick and choose what hacking targets are most important, and make moves that conserve energy. Turning cameras to your side helps you keep an eye on guards, while cracking safes grants more money (used for character upgrades) and databases give you slight edges in the level.

It’s a system that has obviously been ironed over many times, making it very well balanced and intricate, and even an improvement on some standard grid-based, turn-based combat games. Take the team size, for example. In your standard squad game, you’ll need to cycle through five or six teammates one by one, which can sometimes drag out turns and lead to overcomplicated situations. In Invisible Inc, most of your time will be spent with only two agents in the level (three if you’re lucky, four if you’re excessive). It makes turns pass more quickly, but also lets you focus deeper on the intricacies of each individual move. Gameplay becomes more chess-like, more focused on careful planning and seeing several moves ahead.

And yet… for some reason, you’ll keep losing. Maybe it’s the fact that you can only knock guards out for three turns at a time. Maybe it’s the way they breach through doors. Maybe it’s all those darn camera drones milling about. One way or the other, Invisible Inc is tough, but wonderfully tough, deliciously tough. After a few levels of play, the mechanics become familiar enough that you’ll generally never feel that a key moment came down to luck rather than careful planning and strategy. 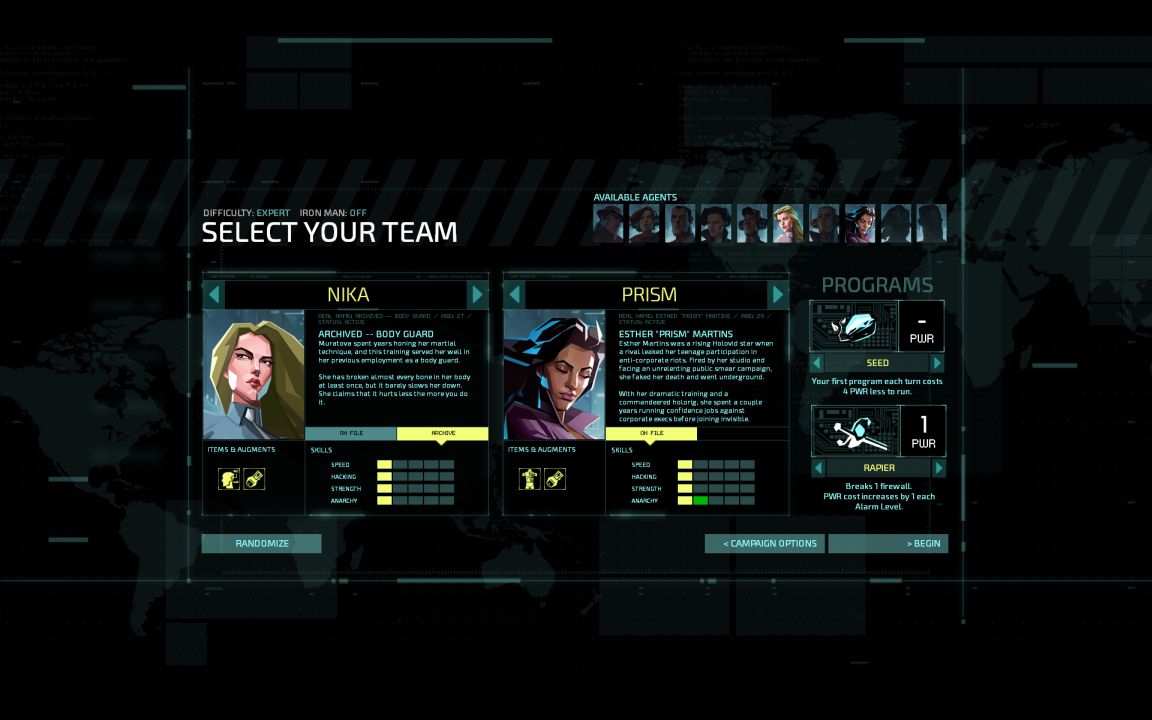 Your choice of starting agents can make a world of difference

The nice (or nasty, as your opinion may be) point about Invisible Inc is that it punishes you for failure. Every five turns, the level difficulty turns up a notch, but get spotted by a guard and the difficulty timer will also automatically progress. It’s a fantastic system, because it means that the ideal way to work through a level is the absolute clean getaway: never have a guard notice you, never trigger any alarms. Of course, that perfectly clean heist is a fantasy, and with each mistake you make, more guards and more cameras come online, compounding the trouble you’re already in. It’s very easy to make it halfway through the level with nary a scratch, only to get boxed in as you get spotted taking down a guard, and then two more, and then a whole camp of them.

Invisible Inc has an interesting division between its flaws and strengths: the game’s core is rock solid, and it’s only in the trappings that players might find deficiencies. For example, although there is a story, it ends up feeling a touch incomplete and on the shorter side. Although the intro and closing scene make wonderful use of the animation that was showcased in Klei’s Mark of the Ninja, there aren’t any other cut scenes to flesh out the story (although it should be noted that the credits sequence is lovingly animated, and fun to watch on its own). The short story is more than made up for with the focus on replayability. Since every level is procedurally generated, no two playthroughs are ever the same, and rather than just making for meaningless shuffling, each level layout poses its own unique challenges. The game offers a delightfully broad control of campaign settings to fiddle with, adjusting everything from guard behaviour to amount of starting cash and how many ‘take backs’ you get. This last point is a particularly effective way of controlling difficulty: at the ‘Normal’ setting, you can take back a move three times during the level, letting you correct mistakes and quickly make up for surprise guards that wander around corners. But move on to the Expert setting, and that allowance gets trimmed down to one single Rewind that will have you nervously trying to decide whether the mess you’re in now is really worth the use of the function.

Replaying the campaign provides some hints that the game might have been rushed out the door. Even though the game is ostensibly set up to focus directly on replaying the main campaign, here and there the same tutorial elements will pop up each time, apparently unaware that you’ve started ten campaigns already and no longer need to be reminded of how the mechanics work. Then there are the levels themselves: throughout the storyline the player can generally choose what goal they’d like their next level to center around. If you’re low on cash, go rob a vault. If you want to try rescuing a fellow agent and thereby grow your team, try for a prison break. Picking the level itself is a nicely strategic decision, because on the world map, nearby challenges will take fewer gametime hours to complete, thus giving yourself more time to prepare before the final mission. And even the final level is randomized: you truly will never play through the same level twice, regardless of how far you get in the campaign. But that said, every level is still a basic variation on a single gameplay theme: get to a goal room, hold the room for a short time, then find the exit and escape. That’s no surprise really: there’s got to be a basic impetus to explore the level and traverse it while avoiding the guards, after all - it only feels like a little more variety in goal, or perhaps a few fancy set pieces here and there, would go a long way in increasing the replayability. 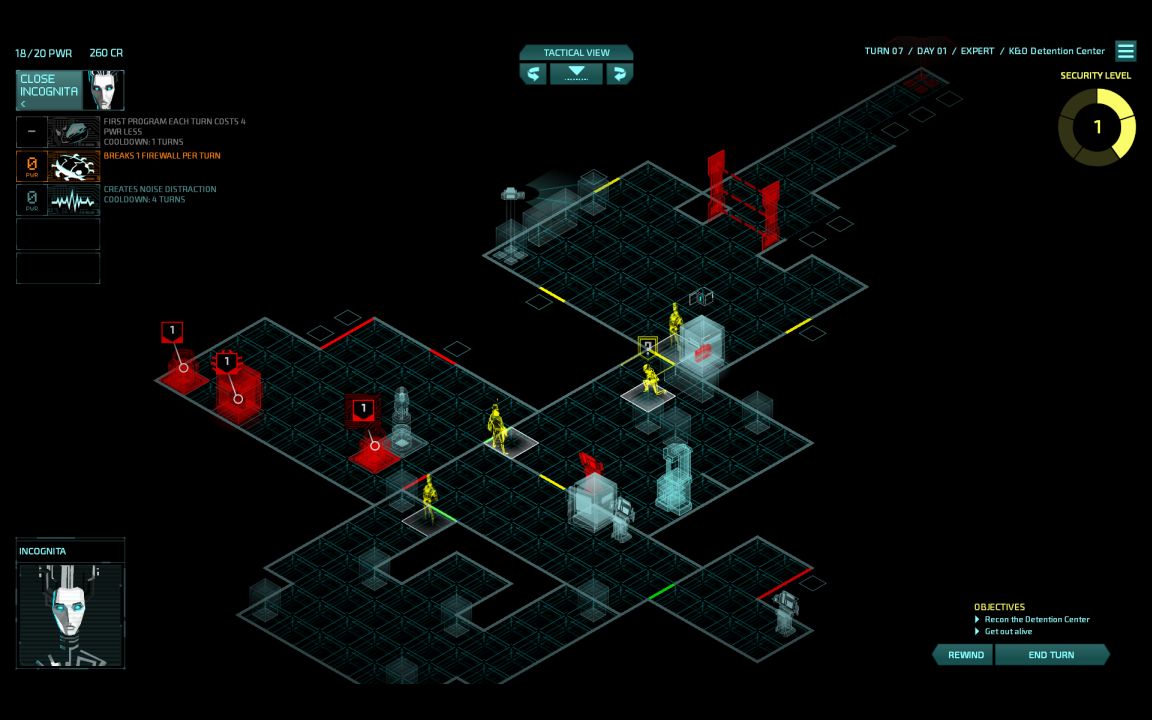 Hack Mode Engaged! Which computer would I like to enslave today?

But all of these, as mentioned, are merely trappings, colorful details hung around a tight central core idea: randomly generated dungeons focusing on tight gameplay. And the good news is that this core is strong indeed. One of the marks of great turn-based gameplay is whether moments of genius occasionally present themselves, and boy do they ever! You’ll be carefully calculating steps, passing of keycards and revival syringes at desperately close intervals, and having some agents distract the guards so your other agents can sneak in for a takedown. More than once, I only survived by having one agent drag the other’s body slowly two the exit, barely staying out of sight of the guards. There will be final bullets, clever ruses, and last-second fiddlings with door.

Invisible Inc boasts a nicely interactive soundtrack that changes instrument sets as the player switches between view modes. The art style is snappy and clean-cut, establishing an oldschool cyberpunk feel with both fedoras and holograms, both giant headphones and floating robots. Its core is so well developed and slick that the game itself is just crying out for additional content to be added into it: new environments, new agents, a longer story, or what have you. Sometimes I wish we would do away with ‘game of the year’ awards and just go yearbook style, with awards granted in various categories. If so, there would definitely be a ‘Game Most Anticipated To Receive An Expansion’, and Invisible Inc would take this award with no contest.

Our ratings for Invisible, Inc. on PC out of 100 (Ratings FAQ)
Presentation
85
The cyberpunk-noir style could be hand-picked to fit the feel of the gameplay, and the animated graphics still feel edgy and adult.
Gameplay
90
One of the best stealth-focused titles of recent times, highly comparable to the similarly great Mark of the Ninja.
Single Player
81
On the one hand, the story doesn’t hang around long enough to develop, but on the other, the core gameplay is so strong that you won’t care who the characters are.
Multiplayer
NR
None
Performance
80
There was some lagging and stuttering at first, but generally the game is snappy and quick, even running on older systems.
Overall
86
Among the many buttons to be found in gamers' hearts, two very common ones are “Just One More Turn!” and “Don’t Let Them See Me.” Invisible Inc hits these buttons over and over again, right on the money, and putting triple-A titles to shame in the art of excellent stealth gameplay. 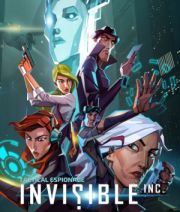 Our Review of Invisible, Inc.
86%
Great
The Verdict:
"Klei Entertainment proves its worth in stealth gameplay once again"
Game Ranking
Invisible, Inc. is ranked #130 out of 1840 total reviewed games. It is ranked #7 out of 110 games reviewed in 2015.
129. Deus Ex: Mankind Divided
PC
130. Invisible, Inc.