A colorful and fun platformer with plenty of variety and challenge

Putting together a successful platformer these days is a tough task. With so much competition – particularly with the rise of independent developers – creators must not only come up with a solid gameplay foundation, but also draw players in with unique features and experiences. When it comes to platformers created by bigger studios, the help of a well-funded publisher often alleviates the need to be creative. However, that didn't stop games such as Rayman Legends from also being excellent in their own right. Similarly, PressPlay's latest release Kalimba - a challenging platformer that manages to blend enjoyable gameplay with a very likable visual style - stands above the overflowing river of the genre. 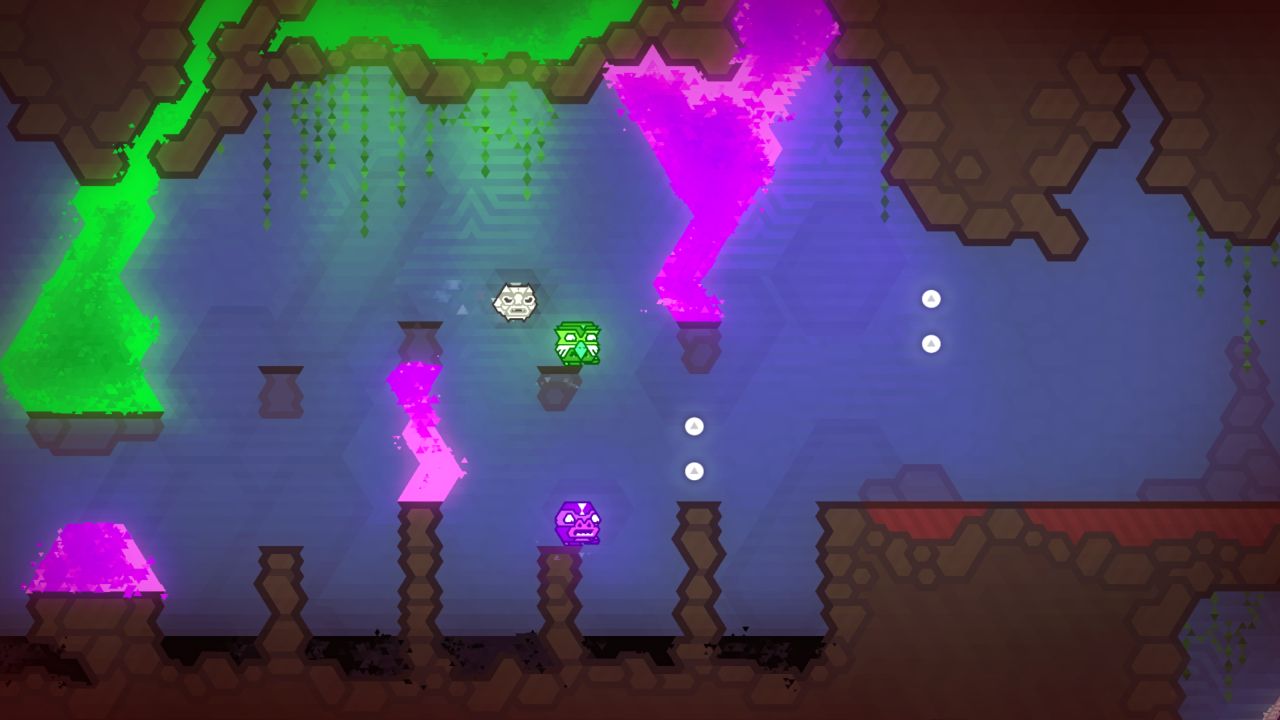 The story is a simple one. A self-aware and sarcastic Bear greets the players, and tells them about the island of Kalimba. An evil shaman has killed a good shaman, as well as destroyed the main totem of the people. The good shaman discovers, however, that she can possess various totem pieces and control them. Your job as a player (the Bear reminds us in a fourth-wall-breaking manner) is to save the world by rebuilding the totem of good. Each piece comes from completing one of the 20+ levels in the game.

Kalimba is a puzzle platformer, with the emphasis on skill, speed, and coordination. The main mechanic, aside from all the jumping, is that the player controls two mini totem figures simultaneously. So you push the stick or hold a key, and both your funky looking characters move at the same time. That in itself is a mechanic which some players will be familiar with, and can already see the creative gameplay potential, such as having the game world design cater to restricting the movement for one or both the characters. But the game further builds on this idea, by introducing other elements that ramp up the difficulty and overall entertainment.

Once you get the hang of watching more than one part of the screen with any movement, you must ensure that when one character jumps for glory, the other doesn't end up evaporated. Next, the game introduces color matching. Many areas in the game are arbitrarily covered in specific paint, and only the corresponding color totem can move through it without meeting a quick end. As such, you'll often be required to keep the other totem alive by carrying it across or constantly jumping. Things quickly get increasingly complex as another main mechanic is introduced – swapping. 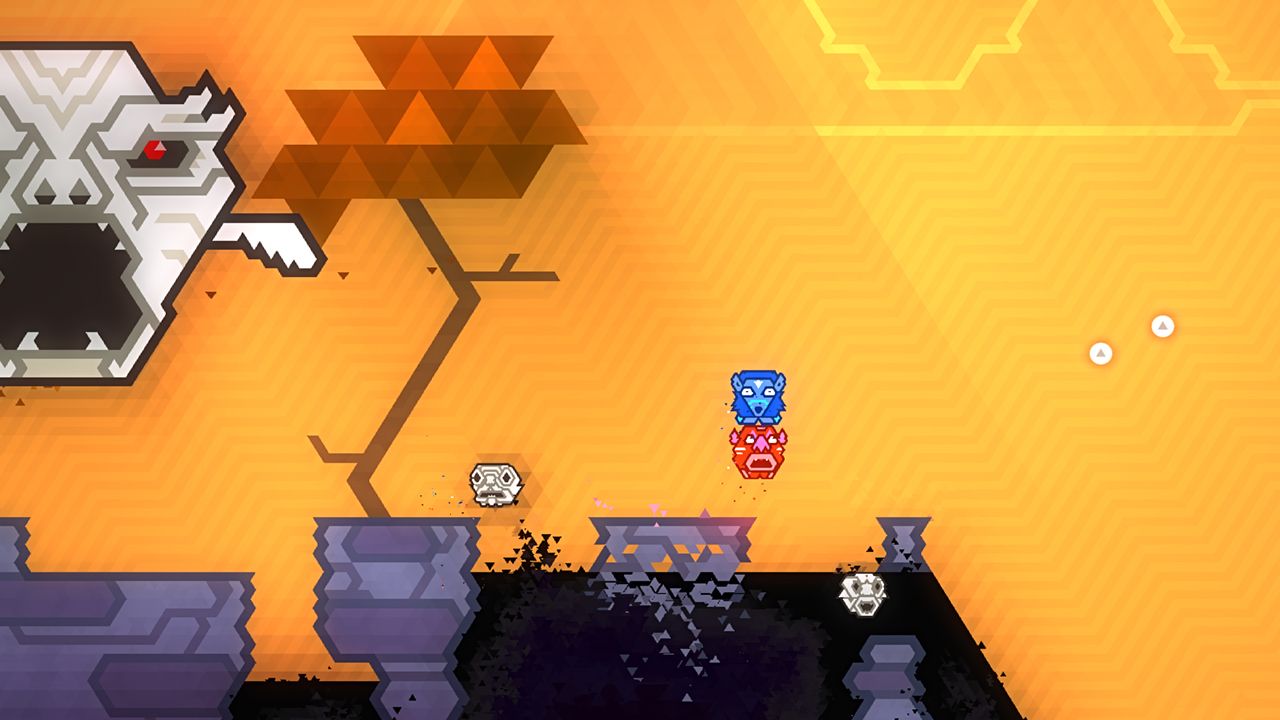 At the tap of a key, you can swap the two totems under your control. This becomes a matter of strategy and timing, as levels become increasingly more challenging and requiring players to swap the totem heroes very quickly, multiple times in a row, and even in mid-air. But it's not just to avoid paint of the wrong color – later on, mechanics such as anti-gravity enter the fray. In one state, our heroes will walk on the opposite sides (top and bottom) of the screen; swap between them, and now they are bouncing off each other in the middle, mid-air. And while you're managing such wild gravity conundrums, remember that random blotches of paint are still a threat, and the mysterious black textures simply eviscerate you on contact. Oh, and there are enemies chasing you as well.

The controls are tight, and the game escalates and varies its mechanics quite well. A keyboard or a controller works just as well. You're never doing the same thing for too long (besides the swapping and color matching), and the three game worlds usually end with an exciting boss fight. This is probably one of the most balanced platforming games, perfectly matching controls with clever design and accessibility with challenge. It's a blast to play, and anytime you screw up, there is an obvious reason why; you didn't time the jump or the swap correctly, or you simply missed an incoming paint streak of the wrong color. The game doesn't demand the precision of Super Meat Boy or the quickness of Rayman, and thus offers a far more friendly level of challenge. Thanks to that, players won't be as discouraged by failing in Kalimba as they may be in other recent platformers.

Kalimba is unquestionably a challenging game that asks players to think two steps ahead and have their fingers at the ready, but it's enjoyable none the less. Part of that is thanks to a lenient progression system. Dying simply respawns you at the last checkpoint so you can try again, and you lose a collectible point. These points are gathered throughout the level, and are used to score your run. Your deaths are subtracted from the collected point total, so it's possible to run out of "lives" for the level and have to start over. However, most players will be easily able to progress, though perhaps without earning a cool look for their totem for the main game tower, which requires collecting most of the points and dying very few times. If the gated progression systems of something like Rayman caused you frustration, Kalimba offers welcome relief. 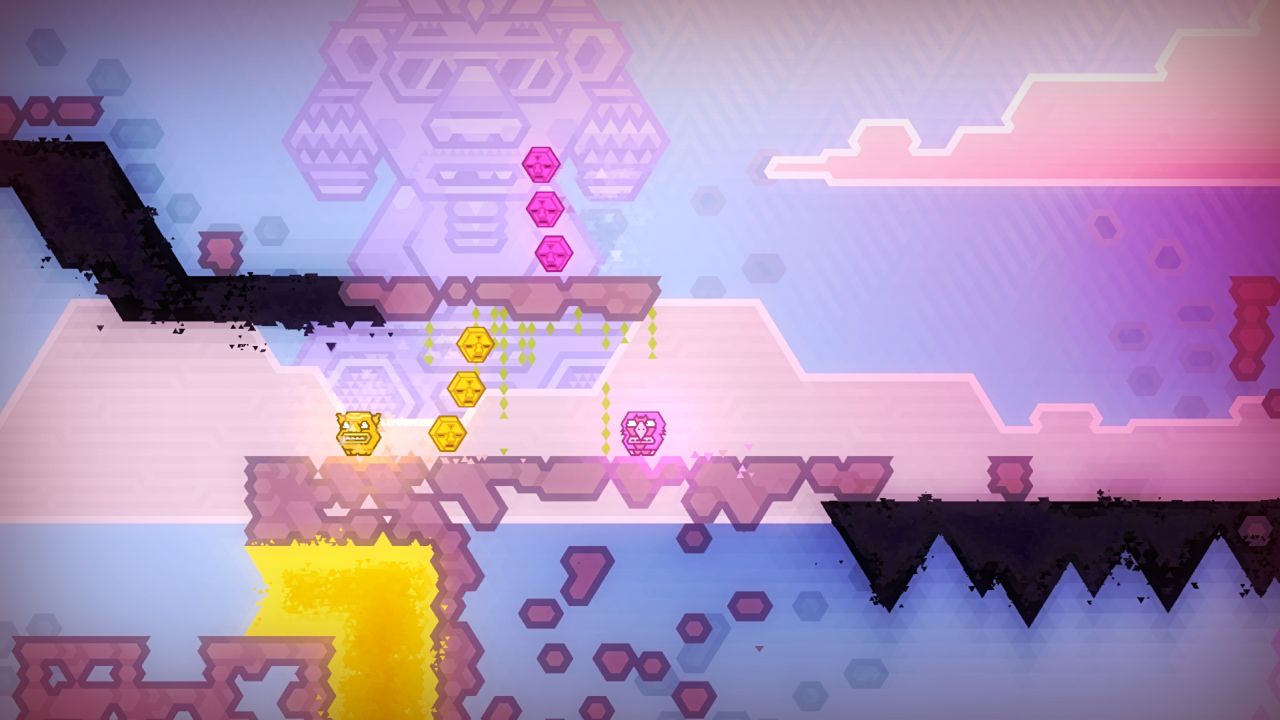 With a decently long campaign for the asking price, Kalimba offers good value by providing abovementioned gameplay variety. Replay value comes in the form of leaderboards, and attempting to improve on your individual level scores. There's certain satisfaction in replaying a level and earning a better looking totem piece for your tower. Other extra modes include ‘Old Skool’ Mode (three lives, no continues, for Super Meat Boy type people) and various special challenges. Those looking for new wholly new content will find it in the co-operative mode.

While the mechanics remain the same, in co-op there are two players, each controlling a pair of same-color totem characters. The levels featured here are slightly different from the main campaign, and offer a whole new level of challenge because there are now 4 characters involved. Now, instead of having to worry about your own reaction time and coordination, the other pesky human needs to keep up to ensure success. Needless to say, it's not a game where you'd get very far with uninitiated friends who only came over for dinner. Levels are scored similarly to the campaign, with deaths reducing your overall result and number of lives. Perhaps because it is so challenging and communication is so crucial, there is no option to play co-op online. Because glaring at your friend in person after yet another failure is much more effective, as he awkwardly fumbles the controller and says we should try again, or maybe play something else.

Kalimba features a rather interesting original art style and "trixelated" visual flair, resulting in a combination of cute character designs and an overabundance of triangles. It's bright, colorful, and easy to look at. The visuals are free of clutter and it's easy to identify the characters and environments, unlike in game such as Rayman where high-octane sequences and overabundance of visual effects can add to the frustration of not seeing the next ledge. The sound design is similarly quirky, with odd audio effects and a calming and playful soundtrack. 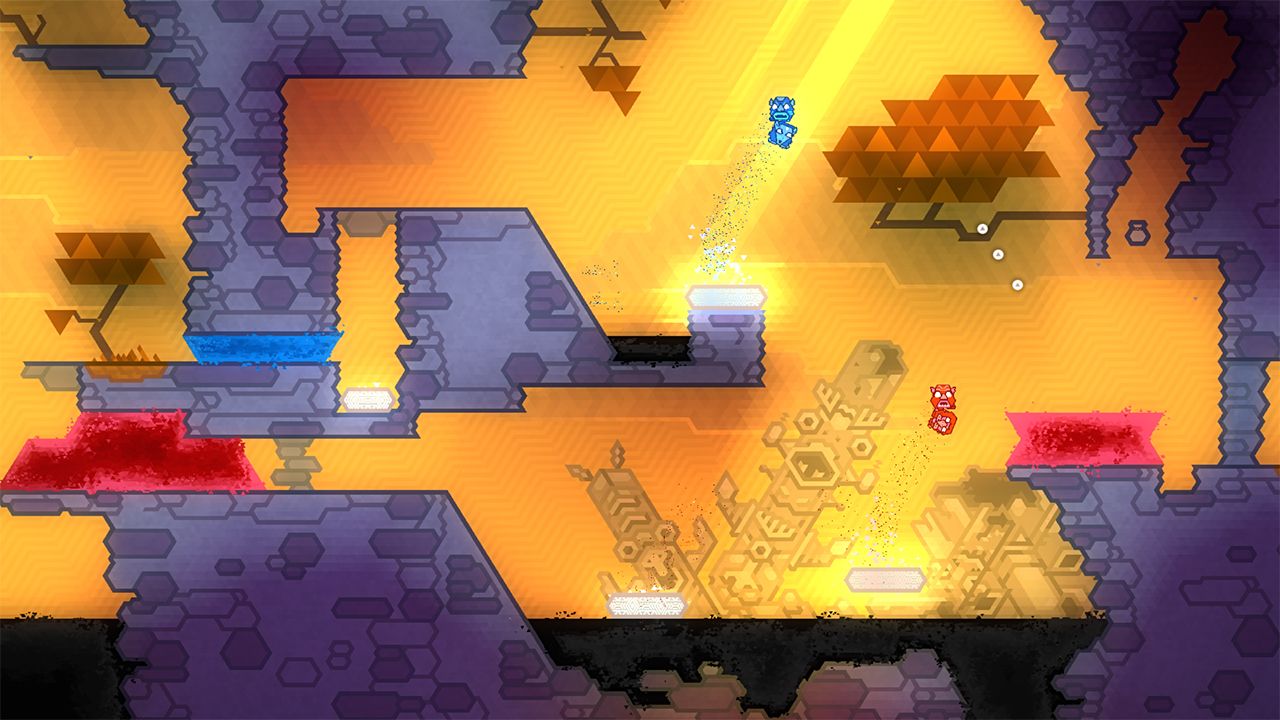 Following a rather subpar outing with Max: The Curse of Brotherhood, Press Play has managed to redeem themselves. Kalimba is the sort of game that comes out of nowhere and manages to provide a highly enjoyable experience. It's a platformer that hits all the right notes, from its tight controls and clever gameplay mechanics, to solid level design and just the right level of difficulty. The presentation is clean, inviting, cheerful and unique. You get a lot of entertainment for your money, and if your friends are hardcore enough, there is even more to do in the co-op mode. If you have any interest in fast-paced platformers, but have been let down by the gated progress or straight-up punishing nature of other games, give Kalimba a go.

Our ratings for Kalimba on PC out of 100 (Ratings FAQ)
Presentation
84
A colorful and cute visual style complements itself with likewise oddball audio design. The triangular art design is unique.
Gameplay
86
Challenging yet fair, Kalimba's brand of platforming and puzzles is all about reaction time and thinking ahead.
Single Player
85
A forgiving progression system will see even lesser skilled players to the end of the journey, and those who love a challenge can aim for perfect runs.
Multiplayer
78
There are new levels to explore together, but the level of coordination required to succeed will put a lot of players off. No online play, perhaps for that reason.
Performance
(Show PC Specs)
CPU: Intel Core i5-4670K @ 3.80 GHz
GPU: ASUS Radeon R9 280X DirectCU II
RAM: 16GB DDR3
OS: Windows 7 Professional 64-bit

90
No issues. The game handles equally well with keyboard or a controller.
Overall
84
A charming platformer that's both tough and fun, Kalimba is a success in almost every aspect. 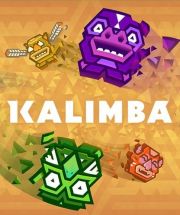 All videos for Kalimba (1)
Advertisement ▼