All nine multiplayer maps are used across many modes and this produces large and small combat arenas of varying quality. Large maps flow quite well in the 64-player Conquest mode, which was a main concern given the infantry focus. Downtown is one example and it incorporates numerous vertical layers and flanking routes. All large maps make use of light vehicles to bring players back into the action. On the small scale, maps like Growhouse are better for deathmatch, despite problematic spawning. Another small map, called The Block, compresses action into a narrow corridor and is cluttered with more than 16 players. Most of the maps are cleanly presented with subtle design elements that you come to appreciate over time. Destruction within maps is restrained too, aside from large events such as a train bridge collapsing. Routes can be opened with explosives at specific map locations, and some walls do crumble. Subdued destruction is carefully placed to retain map structure and create long-term surprises. The maps are varied, catering to the different modes, and they facilitate many healthy skirmishes. 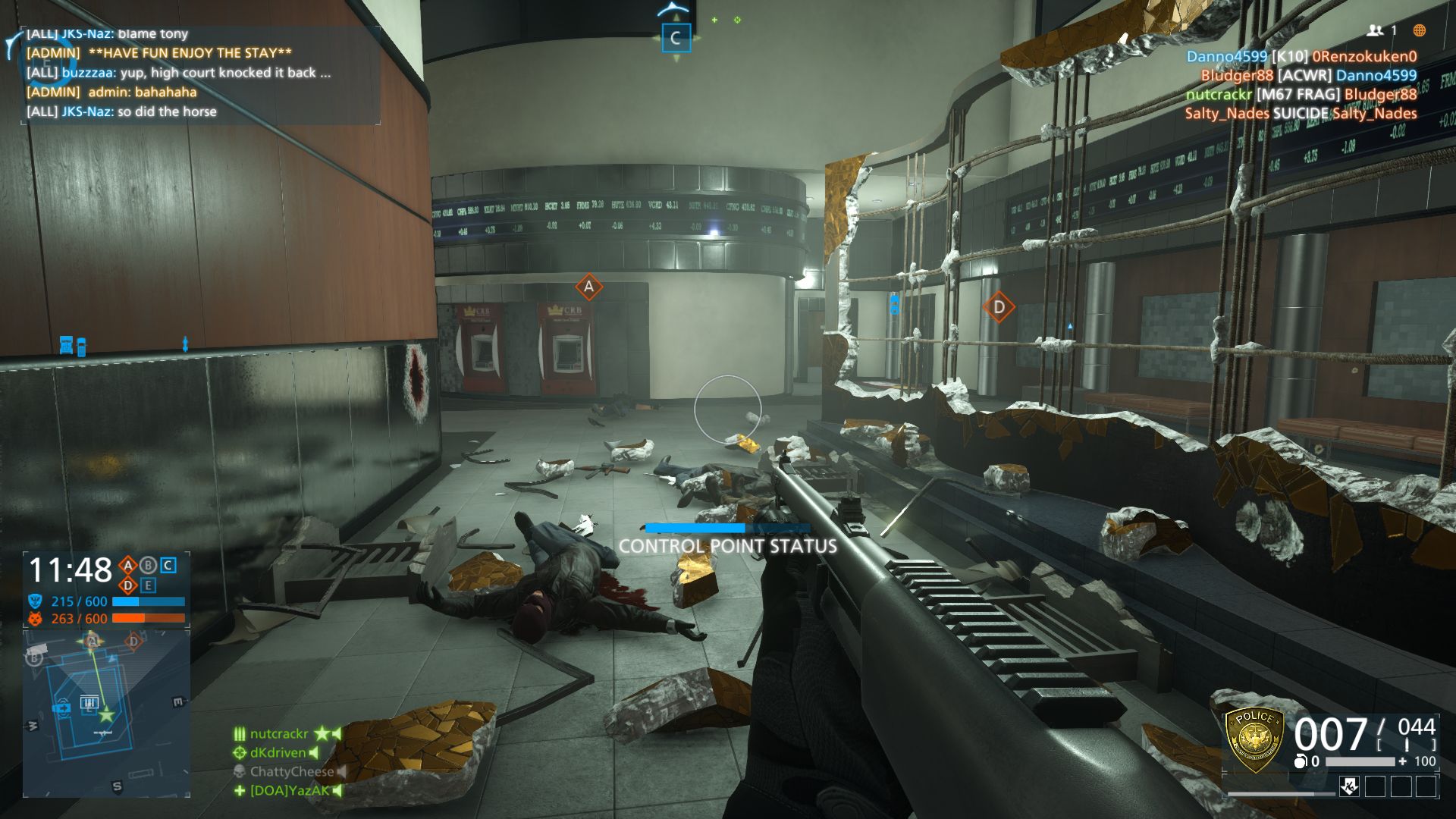 Maps still have destruction, but it is used carefully

The multiplayer arenas look as good as they function, with Visceral making the most of the Frostbite engine. One pleasing side-effect of the reduced destruction is a greater distinction between maps; prefabricated buildings are rarely duplicated, meaning there is more unique content for each level. Texture quality is above standard, with interesting graffiti and advertising placards. Reflective surfaces give areas a clean appearance which contrasts nicely with the turbulent battles. Enclosed areas have the most detail, as they now look liveable and not just slabs of concrete or empty rooms. Despite the extra detail, targets are always clear because of sharp profiles and good lighting. It all makes for a great looking online experience that is packed with hidden detail.

Although the theme is cops and robbers, the game fares better when that aspect is underplayed. Modes that ignore the motives for each side, giving them both the same objective, seem to work the best. Hotwire requires both teams to steal vehicles and drive them at speed, making it Conquest with drivable capture points. Avoiding enemies is a primary task, but you do your team no favours by driving in circles while the enemy controls more vehicles. So there is incentive to push into action and regain ascendency, or at least guide pursuers into a trap. Teamwork forms naturally as players spawn in their own team's cars and all passengers earn points. Driving a posse through streets and killing enemies on the roadside is satisfying. There is a strong desire to always be in locomotion, but you will sometimes find yourself stranded in the middle of the map. When that happens, there is an uneasy serenity as you wait for vehicles to circle back around.

Unfortunately the car physics in Hotwire leave a lot to be desired. Vehicles can stop dead if they hit an object that is only ankle high. Momentum is rarely preserved correctly when making jumps. Collisions between vehicles are problematic, causing a tanker truck to slide and fly into the air as though it was made of paper. There is insufficient feedback when vehicles take damage, requiring regular checks on car health as you try to watch the road. Poor car physics have been in the franchise for a few years now, but they have never been integral to a game mode before. Despite this, the continuous motion aspects of Hotwire make it strangely calming and a good addition to the franchise. 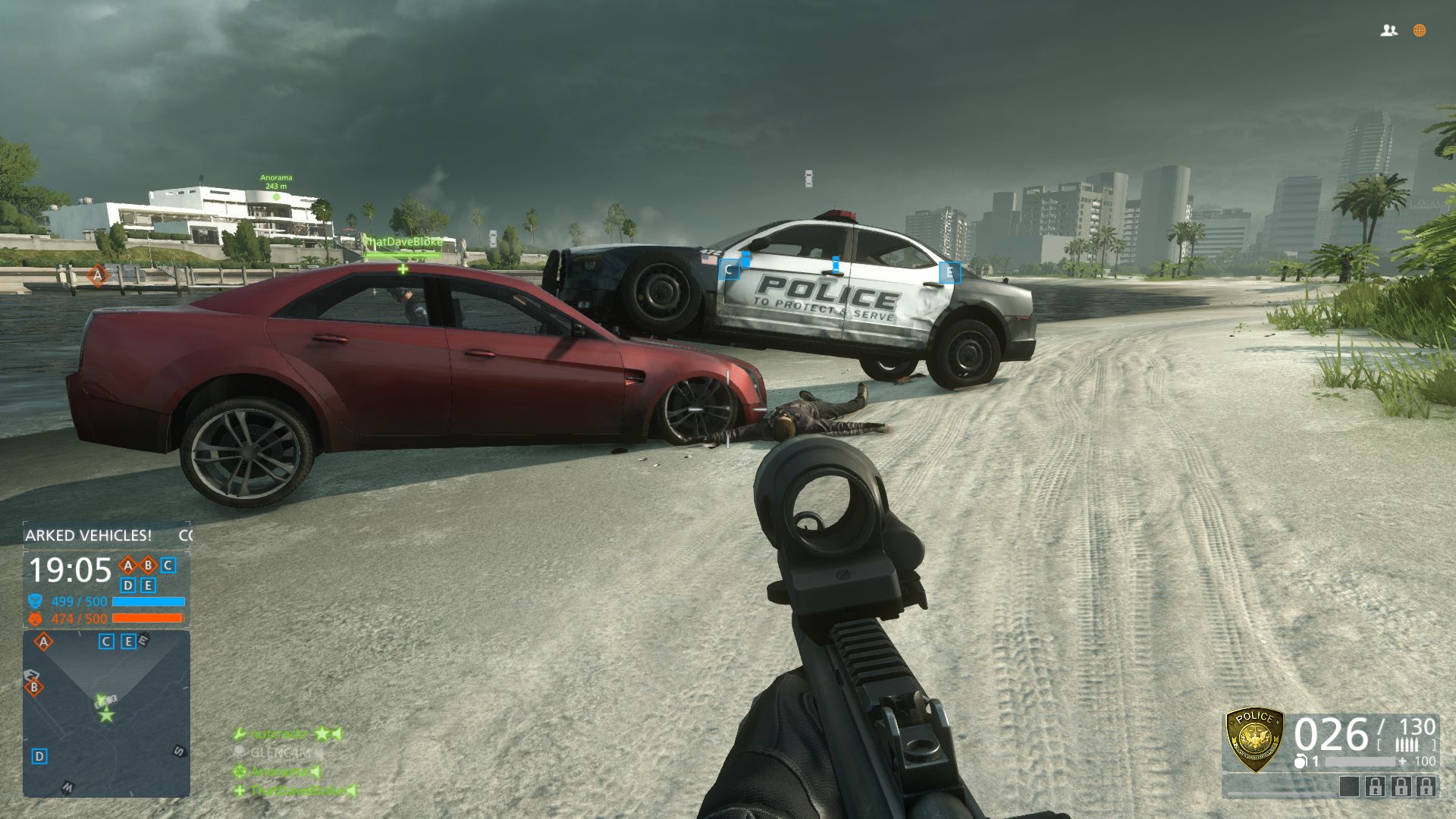 Cars get stuck on each other, sadly they do not form a super megazord unit

The Blood Money mode is not quite as relaxing, as it has teams fighting over a money pile in the centre of the map. You must bring money back to your vault and greed makes this more interesting. Completely filling your loot bag takes longer but you are better rewarded. Enemies are never far away from interrupting your withdrawal, so covering your team is essential. Running back to base with a full bag can be exhilarating. Both teams can also raid the vault of the opposing side, assuming they have any money. So you could skirt around the side of the map and ‘borrow’ from the opposing team, bypassing the frenzied struggle over the central money-pile. You can bet the enemy will react in kind to get their money back, spreading the action over the map as the round progresses. This tug of war over money is highly replayable with intuitive balance between defence and attack, and it could be the best new mode that the game introduces.

When the game implements asymmetric modes that have the cops and robbers playing their logical roles, it stumbles. Rescue is one such mode and it operates like Counter-Strike with criminals guarding hostages. Maps are often just tiny slices of large arenas with a suitable building to hold two hostages. Encounters can occur within seconds and rounds might not last a minute. Police only need to rescue one hostage, and carrying them has no movement or aiming penalty. Hostages are impervious to grenades and bullets, so there is no need to act carefully around them. Although a round-based mode, maps do not fully reset until four of nine rounds are complete. Any open doors or broken windows remain in their previous states for most of the match. Unlike Counter-Strike, the Rescue mode lacks finesse, uncompromising balance and perfected level design. The other modes that put teams in their logical roles fare slightly better, but Hardline is still best experienced when both teams are given the same objective.

Visceral delayed Hardline with the goal of reducing the technical problems that crippled its predecessor. Despite their efforts, some technical issues remain. Animation bugs occasionally show frozen or sliding characters. Rubber-banding lag returns and was so bad during one game that a recently-disarmed trip mine blew me to pieces. The kill cam is still not smooth, frequently getting stuck behind walls or shaking. Fortunately the number and severity of technical problems is a fraction of those found in Battlefield 4 at launch. It also performs better due to the infantry focus, maintaining smooth framerate on ultra settings across all maps and modes. Hardline has some bugs and balance issues, but they are unlikely to cause outrage. 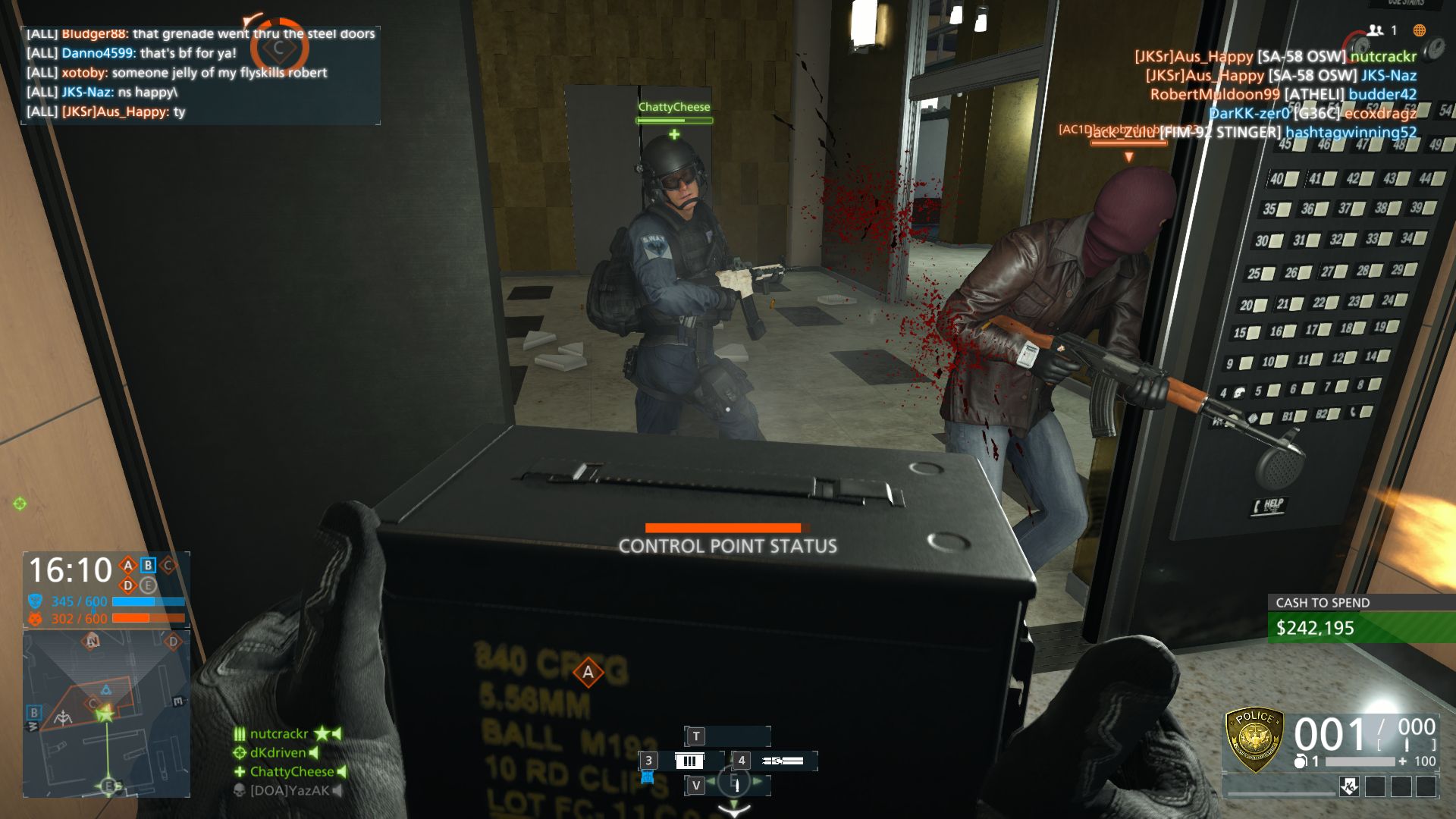 The elevator music is worth dying for, irrespective of your lawful affiliation

Battlefield: Hardline is a worthy spinoff for the long running shooter franchise. Visceral Games have built a decent campaign that has careful pacing and detailed presentation. The online component introduces some great modes and uses the cops & robbers theme intelligently, without compromising the winning formula. New gadgets and some altered weapon loadouts change the familiar multiplayer classes. The maps are well designed and get better with time, despite inconspicuous destruction and the occasional bad map/mode combination. Series veterans will need to adjust to the frenzied infantry action, swapping their tanks for police cruisers, but with time they may come to appreciate the changes. Hardline stands out from its predecessors and is occasionally so much fun that it should be a crime.

Prev12
Our ratings for Battlefield Hardline on PC out of 100 (Ratings FAQ)
Presentation
89
The campaign looks great with a lot of detail in environments and cut scenes. Online maps have a smart balance between visual effects and unimpeded target acquisition. Destruction mechanics are typically subtle.
Gameplay
82
Online gunplay is solid, with new gadgets that increase mobility. Multiplayer car physics could be better. Stealth in the campaign is a basic but functional.
Single Player
75
The tale of police corruption is carefully paced. The eight hour campaign has some problems, but is probably the best in the series.
Multiplayer
87
Introduces two great modes to the franchise. Large battles are insane and the theme provides additional laughs. The infantry focus minimizes balance issues.
Performance
(Show PC Specs)
CPU: Intel i5 3570k
GPU: Gigabyte 7950 OC 3GB
RAM: 8GB DDR3
OS: Windows 7 Ultimate 64-bit

79
There are bugs, but they are generally minor or rare. The game runs smoothly on ultra settings.
Overall
80
With two great new multiplayer modes, solid maps and interesting gadgets, Battlefield Hardline carefully folds a police theme into the franchise. The result is a chaotic and rewarding experience.