We go hands-on with the upcoming paint shooter

Over the last few console generations, Nintendo has largely shied away from shooters - especially competitive ones. So when the unique, paint-firing Splatoon was announced at E3 last year, it turned a lot of heads. Splatoon’s lighthearted and whimsical take on shooting oozes with the family-friendly style which has defined Nintendo for generations. But after going hands-on with the game at PAX East last week , I found it to be as strangely fun as it was cute. 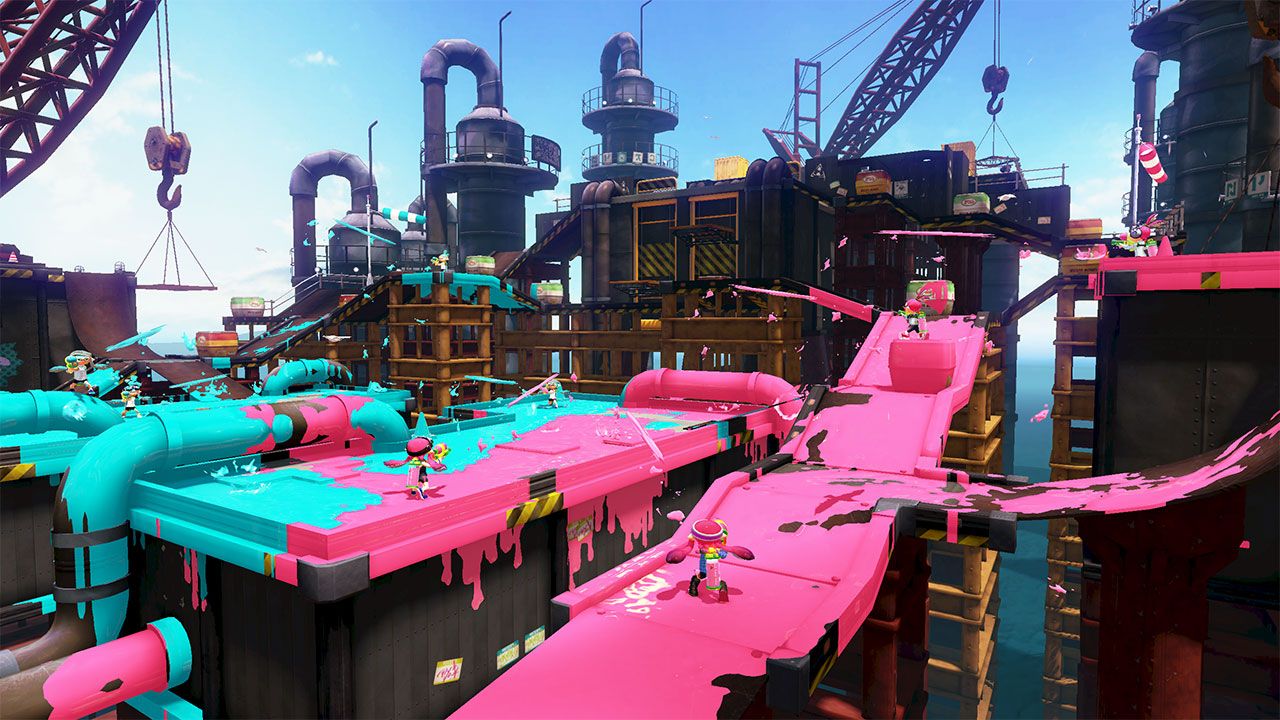 Splatoon has some straightforward gameplay mechanics - for instance, you still get points for shooting your opponents - but it’s more creative than it initially appears. Using a third-person perspective, players fire paint from their guns, coating the floors and walls of the map in their team’s color. While standing on territory marked by your team, you can take a squid form and swim in the area your paint covers. In this form you recharge your gun more quickly and can travel at faster speeds. If your paint gun isn’t getting the job done fast enough, there are also paint bombs which can be used to cover a wider area of the floor.

The “squid form” isn’t the only unique mechanic Splatoon has. Even the aiming is a little weird as your gun is aimed using the motion controls of the Wii U gamepad. So since I usually hold my controller at a 45 degree angle, my shots kept firing high in the air, spurting from my gun like a fountain. Luckily, the game provides a visual line of fire, so you can aim your shots and adjust appropriately.

The more ground you cover and the opponents you take out with your paint gun, the more you charge up your special attack. Activating your special gives you a bazooka with unlimited ammo for a matter of seconds. Due to the limited time frame you can use this special ability, it’s important to pick when you’re going to draw the weapon.

The game mode we demoed in Splatoon was called Turf War. The goal of Turf War is to cover the map in more paint than your opponent. In this mode, players seemed to be using two different strategies. Some were rushing to see how deep they could get into enemy territory, while others stayed back and made sure that every nook and cranny of the map was covered. 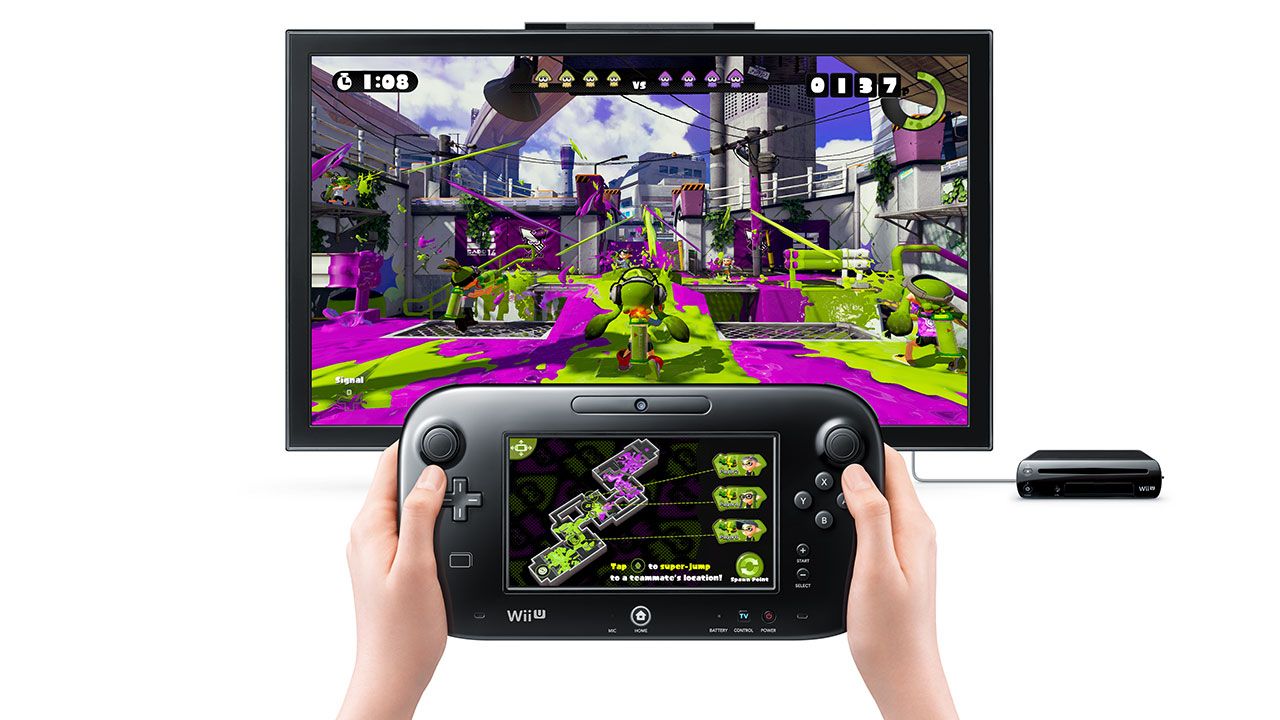 I was one of the conservative players at first, hanging back and really making sure that our end was well covered in paint. While in human form, characters move slowly, and the slow stream of your paint makes covering areas a slow affair. Finding all of the nooks, crannies, and hidden areas of the map is harder than you would initially think. You can’t traverse all areas of the map in your human form as fences, hills and other obstacles prevent you from reaching certain spots. This forces you to paint the floor and then use your squid form to slide under the fences or up steep hills. This traversal element adds something unique to Splatoon, forcing you think about more than how to best shoot your opponent.

After a few minutes of hanging back, my teammates called for help and I hurried to the front lines to lend my services. While the maps in Splatoon aren’t huge, it can take a while to traverse the area, even in your squid form. Coincidentally, the game allows you to use the map shown on the Wii U gamepad to speed up the process. If you tap the icon of a teammate, your character will fly to their location, allowing you to more quickly get around the map.

No sooner do I arrive than I witness the colorful mayhem of these paint shootouts. I lob a paint bomb into the mix and start firing my own weapon. It doesn’t take much to bring our enemies down and soon the area is cleared out. These kind of confrontations happened naturally and often in the game as we and the other team quickly covered our respective sides in paint and began to run into each other more and more often. Quickly, we worked to take out enemies as they found us, then go back to marking out territory with our team colors.

While it’s all a little strange at first - the squid forms, the motion-tracked aiming - after a while I started to get the hang of it. Splatoon’s loop of clearing areas, coating the walls with your team's colors, then unleashing your special attack on returning enemies is addicting and fun. A couple of times I was hit by enemy fire and taken out, but you can get back into the action quickly using the Wii U gamepad map feature I mentioned earlier. 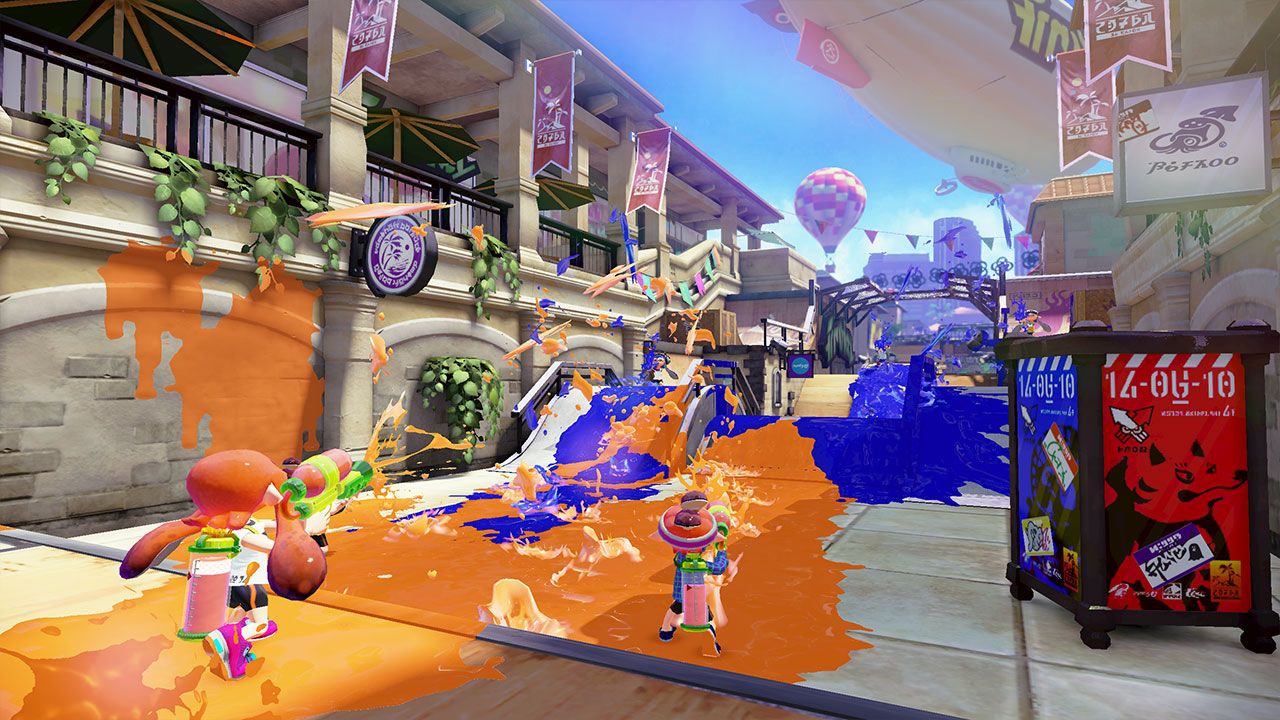 All too soon time is up and the match is over. I wasn’t entirely sure who had won at first as it’s hard to tell definitively while a match is in progress. So we’re forced to wait while the game tallies the percentage of the map painted by each team and then dramatically reveal a winner.

While I very much enjoyed my time with Splatoon’s multiplayer, it left me with questions about the depth of the game. The statistical breakdown at the end of the match didn’t do a lot to show the quality of my performance, making it hard to know how good I was really doing. It’s also unclear if there is any progression to Splatoon’s multiplayer. Shooting your friends with brightly colored paint is a blast, and Splatoon has a lot of neat ideas, but the long-terms goals, like level-ups and progression weren’t really shown in the demo.

There are also questions about the practicality of the multiplayer. The setup at PAX East had every player using their own Wii U gamepad, which made me wonder how local co-op and multiplayer would work. The gamepad feels like an important part of the controls - especially the ability to traverse the map by using the gamepad screen.

Splatoon has the heart of an Nintendo game through and through, from its bright and colorful look to its quirky mechanics. The game’s core mechanics are offbeat and give you a moment of pause to consider the best way to play the game - something a shooter hasn’t done for me in some time. Very quickly the motion control aiming felt natural, and what was odd became familiar. I am looking forward to seeing more Splatoon in action and learning more about the game later this year, exclusively on Wii U. 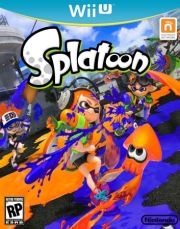 All videos for Splatoon (3)
Advertisement ▼