We go hands-on with the new project from Blizzard

As far as risky, unexpected ventures go for Blizzard Entertainment, a studio which has largely concerned itself with supporting the most popular MMO of all time, Overwatch ranks pretty high. After getting rich on the back of the Azeroth and Kalimdor nations, Blizzard has slowly churned out content for its famous IPs like StarCraft and Diablo. Then last year, Hearthstone: Heroes of Warcraft showed that Blizzard still had the ability to make something new, creating an online collectible card game that enchanted massive amounts of fans who had never been interested in the genre before. 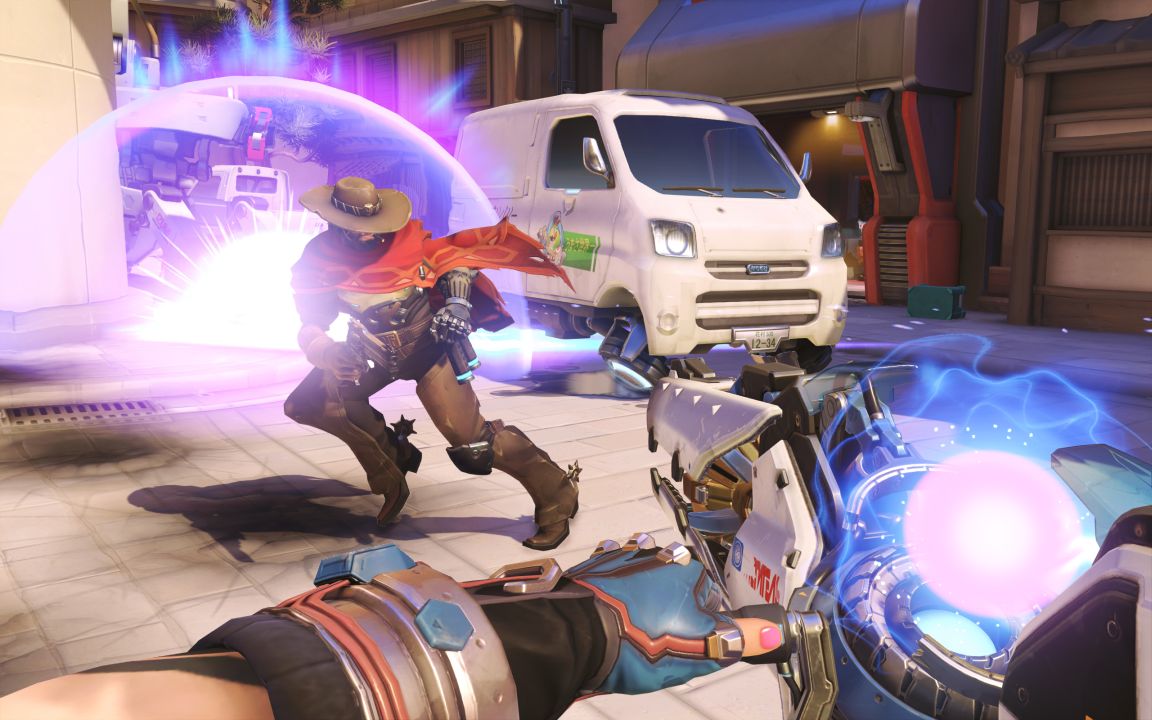 Now Blizzard will attempt to do the same thing with Overwatch. Announced at BlizzCon in November of 2014, Overwatch was pitched as a hybrid between competitive first person shooters like Team Fortress and MOBA games like Dota 2. I got a chance to play Blizzard’s new, fast-paced competitive shooter this past weekend at PAX East, and while it’s in the early stages, Overwatch is shaping up to be a fun shooter.

Observing other people playing Overwatch can be a little intimidating. With so many characters, each with their own abilities, everyone seems to be playing a different game. These characters are split into the classes of Offense, Defense, Tank, and Support. Each has their own creative and colorful design; but the choice of character goes far beyond looks. The character abilities wildly differ from one to the next. Even in the same class, characters will have different powers to master. It seems like a lot to swallow in something as basic as a character select screen, but the limited number of abilities per character (most had three or four) helps prevent the game from being overwhelming. You can also switch characters any time you die, so if you get one you don’t like, you’re not stuck with them for the whole game.

Overwatch’s larger-than-life, cartoon style seems pretty obvious when you’re in the character selection screen, but once you start playing the game, it’s impossible to miss. The game’s palette is bright, wild, and vibrant. Even when playing in the London-inspired King’s Cross map, with its gloomy alleys, Overwatch feels electric in its visual design.

The game pits two teams of players against each other, one side on offense, the other on defense. We played small chunks of the two announced modes: payload and point capture. Point capture is pretty obvious but has a nice ripple to it. The team on defense starts with all of the capture points and must hold them while the side on offense attempts to take the points. It’s hard to say if these points will have to be taken in any specific order as there was only one point our demo map. Meanwhile, in payload, the team on offense must escort a vehicle to a checkpoint; it cannot be destroyed, but only moves when there are players near it. Normally, these modes will be played separately, but in our demo we had a hybrid of the two. There was capture point, and a payload we had to escort. 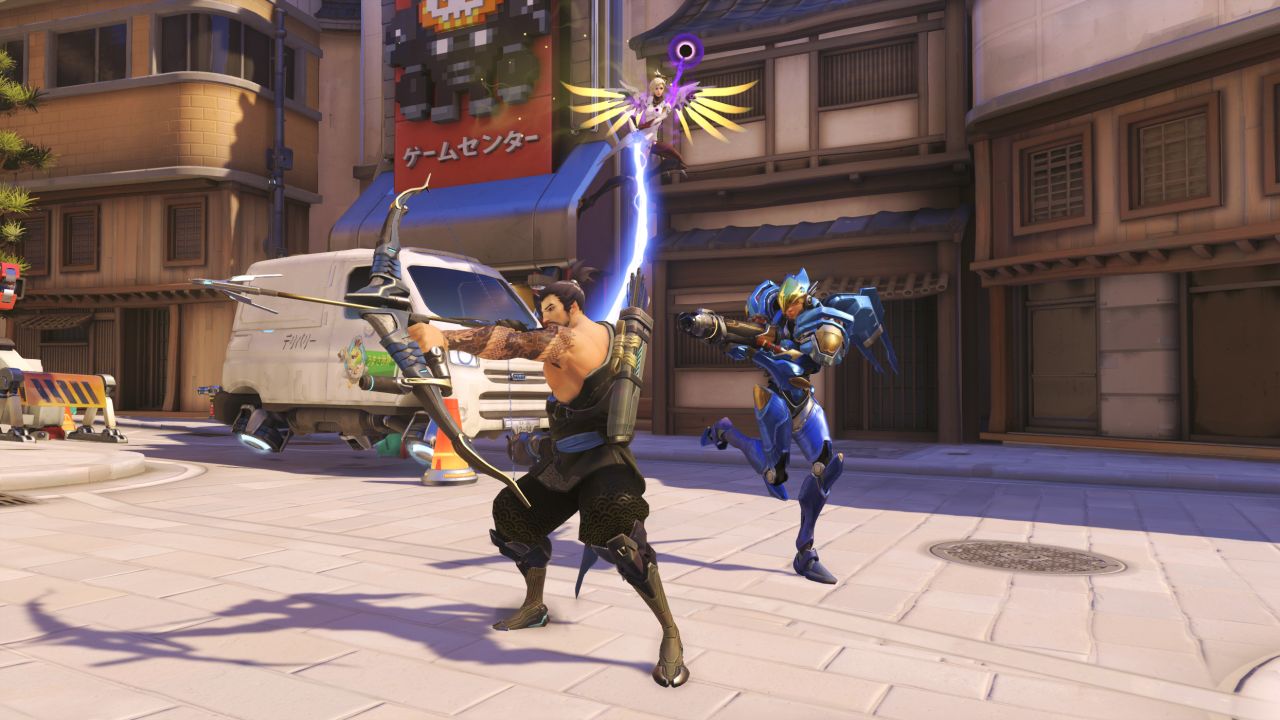 I began the first game playing as the gorilla character Winston. Starting on offense, my entire team of five were bunched up in one room, waiting to start our charge. During this period, the team on defense has some time to set up and wait for the incoming assault. Through the doors confining our team, I could see turret guns being deployed and shields being raised. This stage felt important to the defending team, while our side was waiting patiently without anything to do.

No sooner had the pens opened than the gunfire began to fly back and forth between the offense and the defense. Winston is a melee tank character and not much use from a distance, so I tried to press forward and see if I could get close enough to hit someone. Unfortunately, the intensity of the gunfire was too much and I was killed quickly. After a couple more attempts to take the choke point, I decided to switch characters, as Winston’s lumbering pace wasn’t working for me while everyone else seemed to be moving so fast.

I switched to the newly announced McCree with his trusty revolver and poncho, a character that was much more suited to my style of play. McCree is a sharpshooter and for people who are looking for a more traditional shooter experience, he’s your man. A surprising amount of characters in Overwatch feel like they weren’t made with shooting in mind, but have other abilities which make them dangerous in other ways. McCree feels much more like the traditional FPS character, with his quick firing rate and abilities that revolve around his pistol.

After a few minutes of shooting it out, we broke through the chokepoint and reached the capture point. Here the battle became a give and take, a push and pull. We lost ground and retreated when teammates died or we were overwhelmed by numbers. When we were at full strength, we pressed forward to try and hold the point. 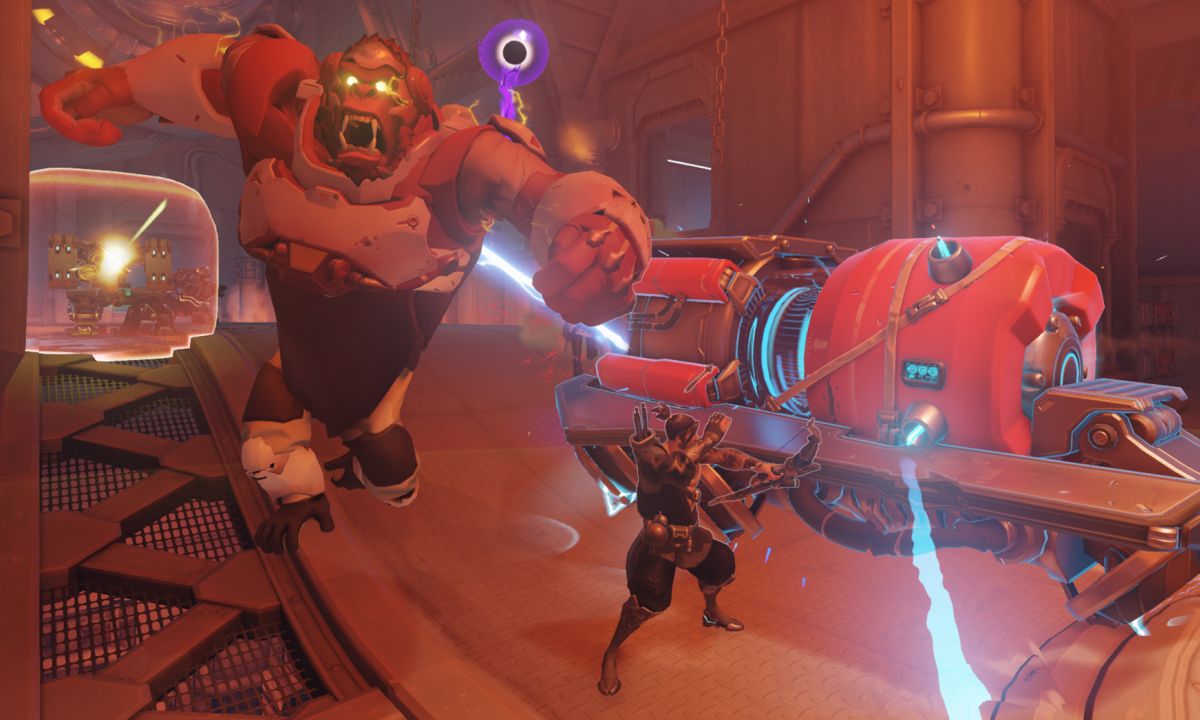 Enemies kept slipping behind us. At first I wasn’t sure where they were coming from or how they would get the drop on us. Then I realized certain characters have jet packs which allow them to fly and use hiding spots that are unreachable to others. When these characters slipped past our defenses, it lead to casualties that cost us more ground.

Finally we took the hold point and began our second objective, which was to escort the payload into the enemy base. This mode was trickier than point capture. It wasn’t so much about us rushing the enemy as it was about simply trying to survive. One of our characters was a medic who hung back and kept the attack going by healing the team. By the time we got to the end of the map, we were only firing enough bullets to keep our enemy at bay. The most important thing was to stay alive and near the payload so it kept rolling forward until it reached the enemy base.

Upon completing this objective, the mission was over and we were victorious. Our team celebrated the victory. We got to see our scores, the match MVP was awarded, and we watched highlights from the fight. Whether these scores or awards will contribute to a larger mechanic or if Overwatch has any sort of progression at all remains to be seen, though it was not shown in this demo.

Quickly we were thrust back into another round, now on defense. This time I played with the character called Reaper. Wielding two handguns which have the bullet spread of blunderbusses, Reaper is a pretty badass dude. He also has the ability to teleport and become temporarily indestructible. It’s a bit of a shame, because while Reaper seemed very cool, that I struggled using him in our match. His teleportation took a long time, leaving him vulnerable to gunfire, and the ability to be temporarily indestructible was helpful for getting out of tricky situations but didn’t help from an offensive standpoint. Reaper is a support character, but I found it hard to do much supporting with him. Instead, I hung back and hoped someone got close enough for my shotgun-like pistols. 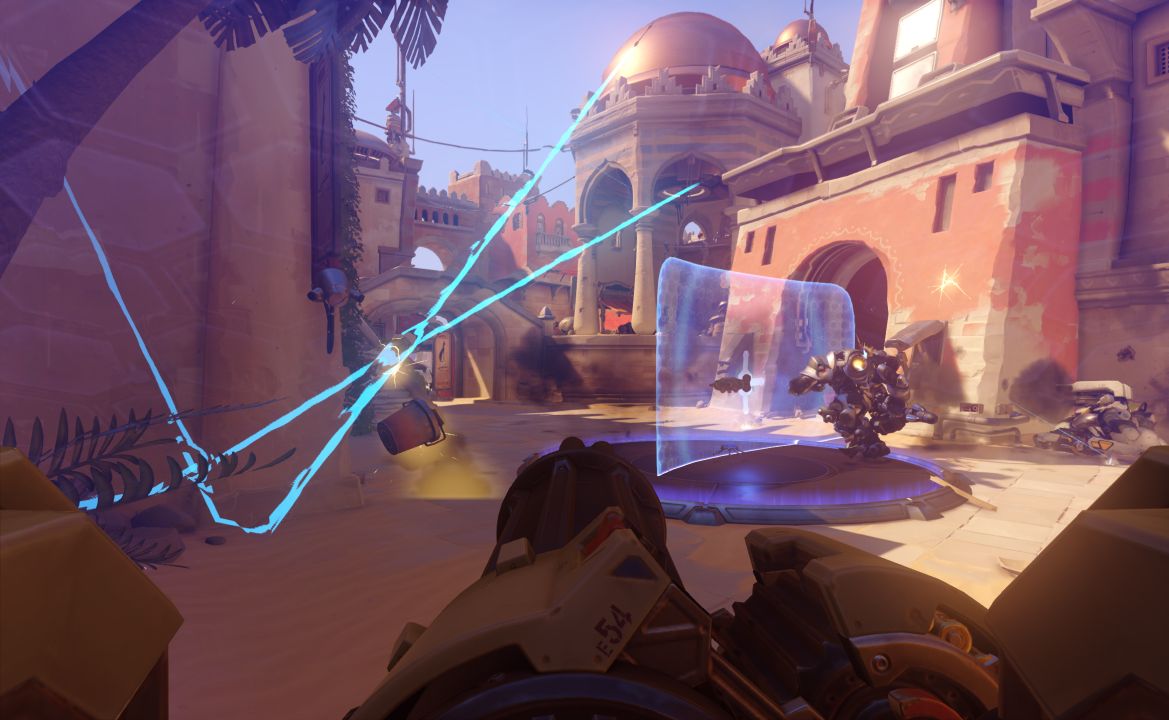 As soon as we started on defense, we hurried toward the choke point. We played the same map as before, King’s Cross, so we knew the spot where we had to hold our opponent. We waited for the doors to open and when they did, we fired everything we had. Much like the first round, the game was a give and take. The opposing team bled their way close to the capture point, and occasionally pushed us out of the zone. But every time we gave a little, we hurried back and retook the point.

The linear, almost tunnel-like construction of the King’s Cross map was kind of fun. Overwatch felt intimate and claustrophobic. The second round ended quickly, as we held our capture point for five minutes and won the round before the enemy even had a chance to reach the payload stage. Again we were treated to the highlights and one person was awarded the match MVP.

As someone who hasn’t taken the deep dive into online competitive shooters like Team Fortress 2 or Counter Strike, I didn’t expect to be all that intrigued by Overwatch. It’s a genre which has never appealed to me and I never thought it would. But the few matches I got with the game really piqued my interest. The fast nature of the action, the way it blended shooting and abilities, the tight and intimate nature of the design made the game stand out. There’s a lot more to see from Overwatch, and I’m sure we’ll get more characters and maps as the release date approaches, but I thoroughly enjoyed my initial impressions of the game.

Overwatch is scheduled to enter a closed Beta phase for PC later in 2015. You can sign up for the beta here.

All videos for Overwatch (4)
Advertisement ▼