Purposeful darkness that is most illuminating

The absence of light can generate fear, panic and isolation. When used correctly, darkness can tap into the imagination of an audience and make them vulnerable. White Night is a game that uses light and shadow to create an intimate and haunting adventure. Presented almost entirely in black and white, it uses shadows better than many other games that dwell in the dark.

Set in Boston, just before the Second World War, the game begins after a car crash leaves you stranded and injured. A ghostly figure beckons you inside a mansion and it seems like your best chance to find help. The mansion belongs to the Vesper family, and several of their graves are scattered along a path not far from the entrance. The front door is locked, but you can find a key that will grant entry. Once inside, the door shuts behind you and you are trapped. Progressing forward, into the overwhelming darkness, is the only way to escape. 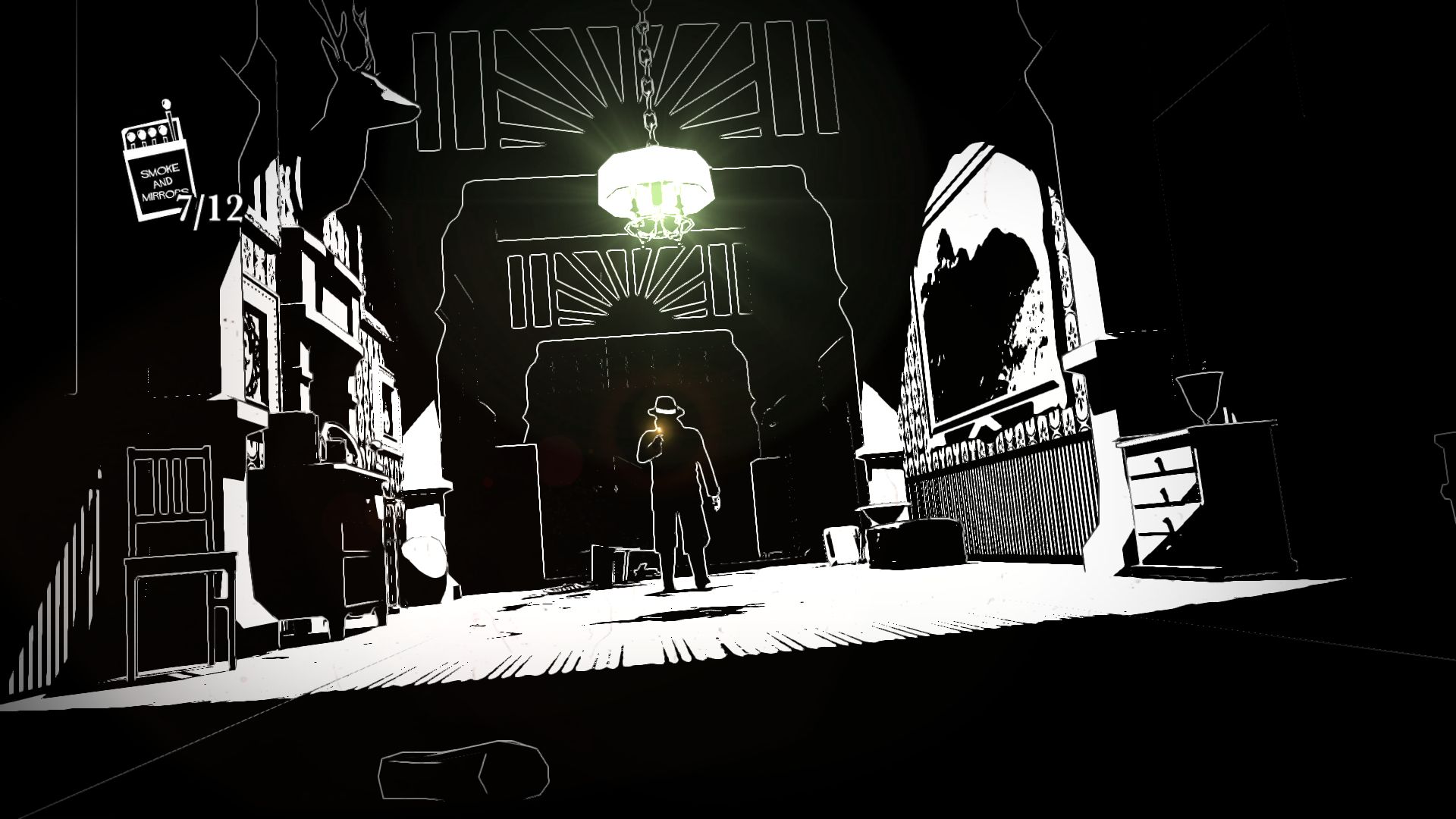 Stay in the light or use a struck match to survive

White Night is played via a third person camera that affixes itself to the corner of rooms, much like the viewpoints in Resident Evil. You collect matches scattered around the mansion, which cast a circle of light that allows you to move into the shadows. Some rooms have their own lights and others can be created by fuelling a fireplace or lighting a candle. Spending too much time in the dark will result in your death. Darkness is not the only threat in the house. Demented ghosts haunt the hallways and will give chase if you stray into their path. So you move through the house, finding hidden rooms and keys, and hope you have enough matches to reach an illuminated area or a save point.

The game blends an economical survival-horror experience with adventure game mechanics. Exploration is typically performed at walking pace because running will extinguish matches quicker. This slower pace builds tension as the house forms around you. On the adventure side, there are basic puzzles to solve. Some puzzles use light, such as following electrical leads or illuminating areas for interaction. Certain objects will need to be carried to other areas of the house, although you will rarely have more than one item on your person. The adventure mechanics are basic. The hardest part is actually finding objects because most areas are pitch-black. Finding interactive light switches can be tricky when they are located in nooks or obscured by furniture.

Interactive items do not glow, aside from matchboxes, so finding objects and flipping switches is all about being thorough. Moving along walls with a lit match and checking each corner is practically required. You will be informed when you can interact with objects, but the interaction range is short and only works in the direction your character is facing. If you stand directly on top of an object, you will be unable to interact with it. There are numerous secondary items to collect, including newspaper clippings, diaries and photographs that all provide intriguing back-story related to the Vesper family. Reading this information creates a tangible connection to the Vespers and reveals the emotional events that led to the day of your visit. 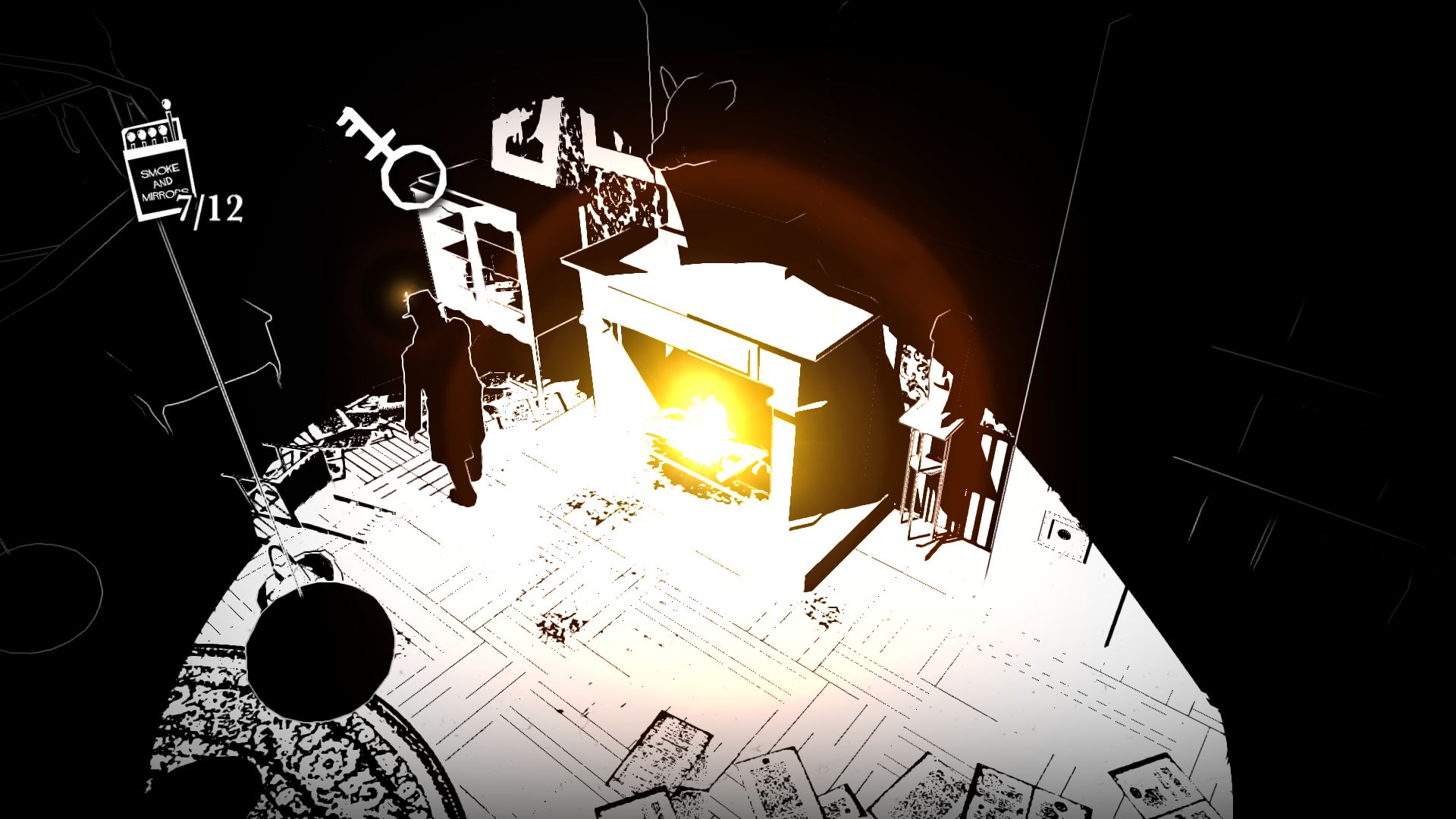 Apart from the basic puzzles and interaction, you’ll be avoiding ghosts that loiter in rooms and hallways. Most of the time, ghosts are merely a faint shimmer lingering on the precipice of darkness. Being patient allows you to avoid impromptu encounters with ethereal beings, but limited matches will keep you from stalling. Some apparitions are stationary, while others patrol a fixed area. Going near them will trigger a chase although they typically give up after a short distance. If you are slow, or particularly clumsy, you will be engulfed. Ghosts can be destroyed by electric light, so turning switches or moving lamps is a primary method to access new areas of the mansion. Not all ghosts can be destroyed, as some wander far from lights and must be avoided carefully.

Moving around the house is not fluent because of the third person camera design. The fixed camera determines your character's movement based on its orientation. As you move through one room, the camera may alternate positions needlessly and this can make your character change direction. In some places, such as a concealed wardrobe, it creates a comical series of u-turns as the camera switches back and forth. Not every camera change produces a clumsy transition, but it is most annoying when you are running from ghosts.

The number of ghosts you must avoid occasionally descends into absurdity. During the first half of the game the ghost encounters are sparse, and coming across one in a dark hall can be a genuine cause for concern. But the balance shifts when a lengthy action segment forces you to navigate several rooms packed with meandering ghosts. The camera system is cruel and, along with the monochrome color scheme, it makes depth perception nigh impossible. Some ghosts even obstruct the camera, so you can only guess your position. The camera is exploited to make the game more difficult, which is a disappointing rupture for the atmosphere. Fortunately this dreadful action sequence is not indicative of the overall experience, with only one later section where you must run the ghost gauntlet. 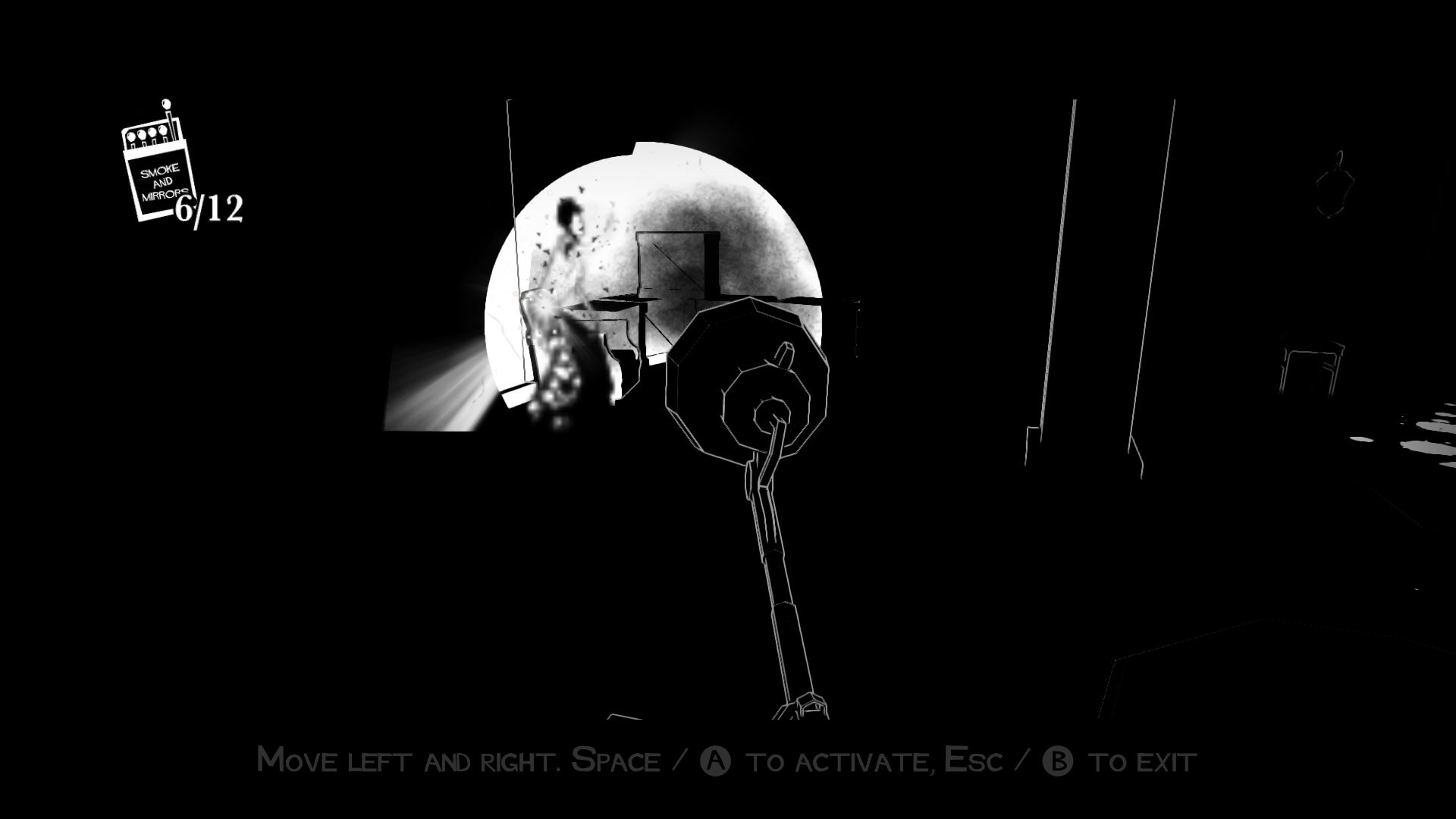 Ghosts perish in electric light, and some lamps are used in first person view

White Night is a game that maintains a deliberate pace as you venture into the darkness. Like Gone Home, it is about the controlled exploration of a house and the revelation of its occupants. The revelation might not be original, but the use of light and shadow makes it shine. Dark secrets are revealed as your explore rooms with only the light from a match to guide you. Some of the lighting tricks employed barely tap into the potential, and that is genuine cause for excitement. If the camera system was better, it would earn even more praise. White Night is a minimalistic horror adventure, but it knows how to use the dark.

Our ratings for White Night on PC out of 100 (Ratings FAQ)
Presentation
78
The 3D world behind the monochrome color scheme is crude, but the use of light and shadow makes it less crucial. The atmosphere, produced by restricting light, is strong and imagination plays a key role.
Gameplay
77
Using light to solve puzzles, exploring the house and avoiding ghosts. The mechanics are simple, but they work most of the time. The fixed camera is the stuff of nightmares.
Single Player
78
The voice over is serviceable, but the majority of story content comes from the interesting excerpts about the Vesper family. Not entirely original, but well constructed and uses nearly every inch of the house for approximately seven hours.
Multiplayer
NR
None
Performance
(Show PC Specs)
CPU: Intel i5 3570k
GPU: Gigabyte 7950 OC 3GB
RAM: 8GB DDR3
OS: Windows 7 Ultimate 64-bit

93
No bugs and maintains high framerate. Initial loading can be a little long.
Overall
77
With a working adventure formula that utilizes light and shadow, White Night offers a haunted house full of atmosphere and ripe for exploration. Just don’t run out of matches. 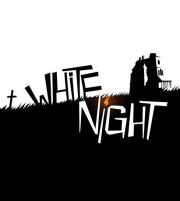 All videos for White Night (1)
Advertisement ▼