If you want a longer, more story-driven experience, Evolve offers Evacuation mode. Here is where the story of Evolve - as barebones as it is - is told. Humans have colonized the planet Shear, but the settlements have come under attack by the gigantic monsters. Thus people are evacuating the colonies. This evacuation is protected by the hunters.

Evacuation campaign charts the story of this mass exodus over five rounds. The first round is always Hunt Mode, then the next three are a mix of Nest, Rescue, and another Hunt. In Nest mode the hunters seek out eggs laid by the monster and must destroy all six. Meanwhile the monster can hatch these eggs into minions that join in the fight against the humans. Rescue mode makes the hunters search for pockets of survivors before the monster finds them. Three different groups of survivors make up a total of nine; the hunters win if they rescue five. Each Evacuation campaign ends with a Defend mode, where the monster starts at level three and must destroy three power relays to prevent the human ship from escaping. These different modes provide a nice change of pace, but they don’t make good use of the hunters’ skills; for example Trapper skills that involve finding the monster are unnecessary, as both hunters and monsters will converge on the objectives. 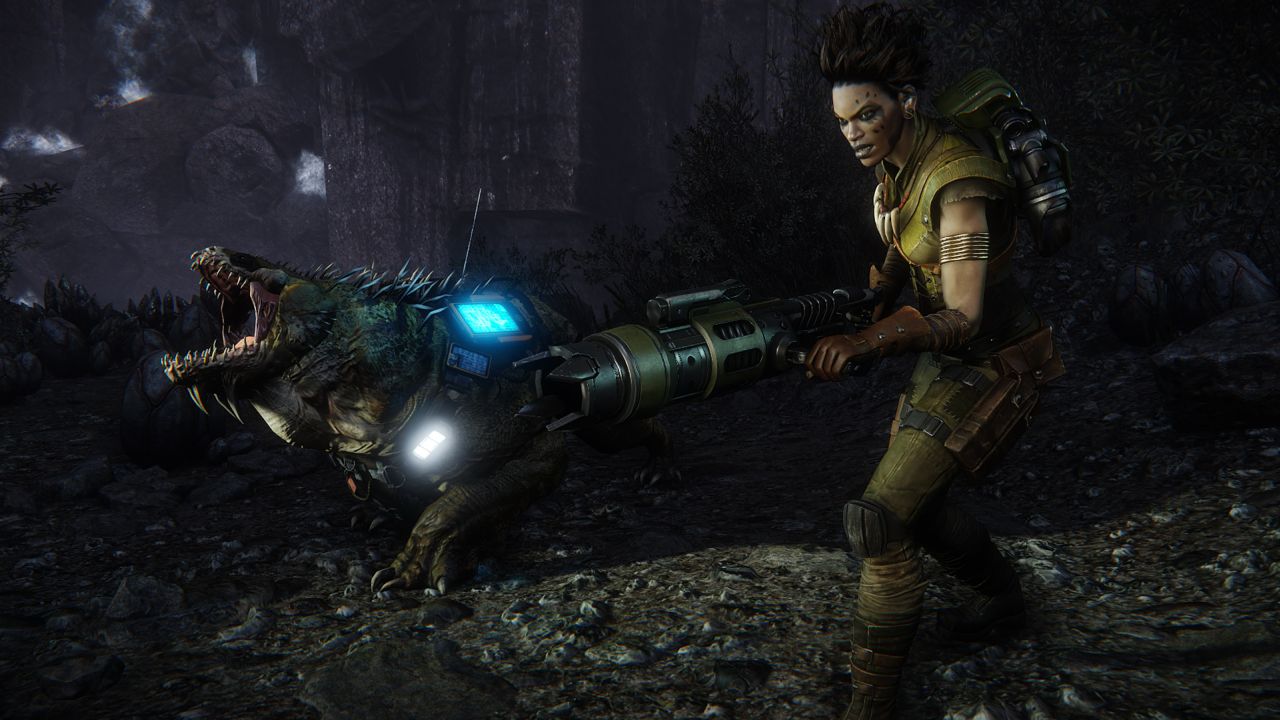 Each win in Evacuation leads to more bonuses in future rounds. If a monster wins the first round they might get the help of a minion in the next round. If the hunters win, they will get turret guns to aid them in their next fight. While this provides incentive to win these individual matches, it also gives the losing team an even bigger mountain to climb in the next game. To counter this, Evolve puts up a graphic during the loading screen to show you that it is balancing the game, however this never felt like it actually helped. Rarely did Evacuations tend to be back and forth battles; they often were dominated by one side or the other - the exception being Defend mode, which always seemed difficult for the monster to win. Throughout Evacuation mode, the results of the matches will tally the deaths vs survivors; this number will add to your experience at the end of the campaign.

If you like the variety of game modes in Evacuation, but don’t want the campaign commitment, Evolve gives you the tools to build your own custom matches. You can choose from any of the games modes, choosing which of maps you want to play on. Then you can add elements from the Evacuation mode you want (clear skies to better see the monster, or carnivorous wildlife to add dangers for the hunters). You can add time limits, use the auto balance feature from Evacuation mode, and make the map you think is best. Then invite your friends to play in the mode with you.

Playing with friends is an important part of Evolve when playing as a hunter. Turtle Rock tries to help with communication by allowing players to mark important things - if you mark the monster the yellow icon will become red - but there’s no substitute for actually talking to someone and plotting out your moves. When you have friends to talk to over headset, you can remind someone that giving chase to the monster leaves them vulnerable, or warn them if a Medic can’t make it to a downed hunter. When you get to play this way, Evolve feels like a much more cohesive experience. You might still be unable to take down the Wraith, but you can coordinate strategies to use teammates as bait to lure the monster into a trap or decide the best place to make your last stand at the power generator. The more people you have, the tougher it can be to find the match where everyone gets their choice of role, but it's an incredibly worthwhile trade. 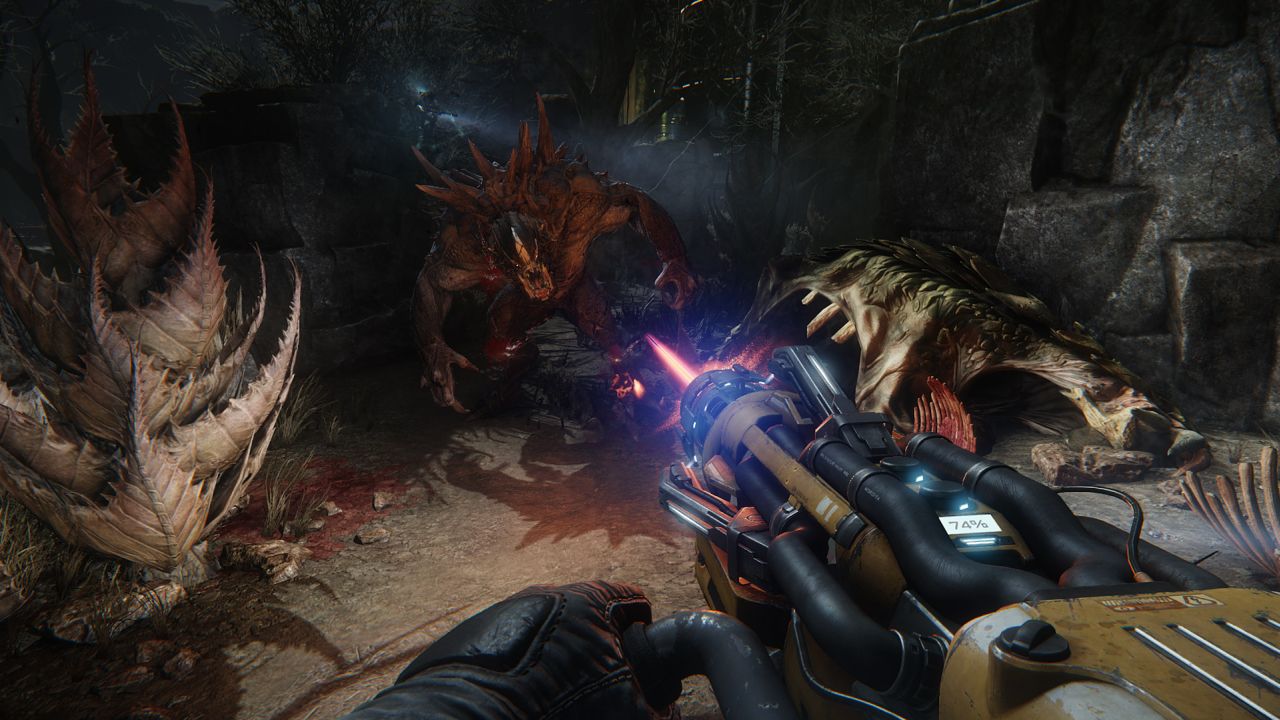 It is hard to get a moment to appreciate the technical aspects of Evolve. While you hear the hum-drum soundtrack ad nauseum while waiting to load into a game, there are other interesting elements that you might miss in your search for the monster or flight from the hunters. The world of Shear is rendered in stunning beauty, even if its jungles, rivers, and plateaus tend to get a bit repetitive. The characters are all well designed and have unique personalities you can become familiar with as they banter back and forth with each other. There clearly wasn’t a lot of time to flesh out the world and people of Shear as the game’s multiplayer mayhem takes center stage, but the bits and pieces which make up the background are appreciated.

Unfortunately, on the whole Evolve is pretty unimpressive. The ideas and questions about asymmetric gameplay that the game raises are interesting and merit exploration. But Evolve proves that when creating competitive online experiences of such an intimate nature, the balance needs to be fine-tuned beyond reproach - and Evolve’s doesn’t hold up under the scrutiny. The matchmaking and its learning curve often betray the promise of fun which lives deep within the game. It’s easy to see that Turtle Rock imagined groups of four players, each with their own headset, chatting back and forth while coming up with strategies to battle the lone monster they faced. But in the real landscape of gaming, you’re often playing with strangers, and when a game demands such precise understanding and teamwork, players will find themselves frustrated more often than not.

Prev123
Our ratings for Evolve on Xbox One out of 100 (Ratings FAQ)
Presentation
72
Evolve’s world is unique, but - like its droning score - repetitive and it doesn’t give you much time to appreciate any of it.
Gameplay
67
The shooting is tight. The monster’s controls are well crafted. But Evolve doesn’t always take full advantage of the tools it gives you.
Single Player
NR
Offline play with bots
Multiplayer
64
Evolve has a ton of small, nuanced mechanics that can work together in exciting ways, but it's often hard to find others who play as Turtle Rock envisioned. If you got a committed group of friends, thing get better. But oftentimes the balance issues rear their ugly heads regardless.
Performance
71
You might have to wait a few minutes if you’re picky about the role you get to play. But for the most part it’s easy to get into a game of Evolve and it runs well once you're in.
Overall
68
Evolve can be good fun. But between those moments of entertainment, the experience is often interrupted by unbalanced mechanics and matches that are over before they begin.