Well, I don't think any of us saw this one coming. You know Ubisoft? That multinational video game publisher that's earned itself a reputation for putting out huge, messy, bloated open-world games? Well, they just put out another open-world game. Shocking, I know, but this one was made in Unity by the people who did Watch_Dogs, lasts about an afternoon, costs ten bucks – to buy, not develop, although I wouldn't bet against it being true either way – and looks like the work of somebody who was cryonically frozen just after the release of Alone in the Dark 2 and still believes flat shading is the peak of what can be achieved with polygons. 'Surprising' doesn't do it justice; this is like waking up one morning to discover that Starbucks has set up a lemonade stall on your street corner, one staffed by rosy-cheeked children raising money for their dear ill grandmother. But is this a cynical game company trying to be the wolf among the indie sheep, or a beautiful spark of creative experimentation from one of the biggest publishers in the world? 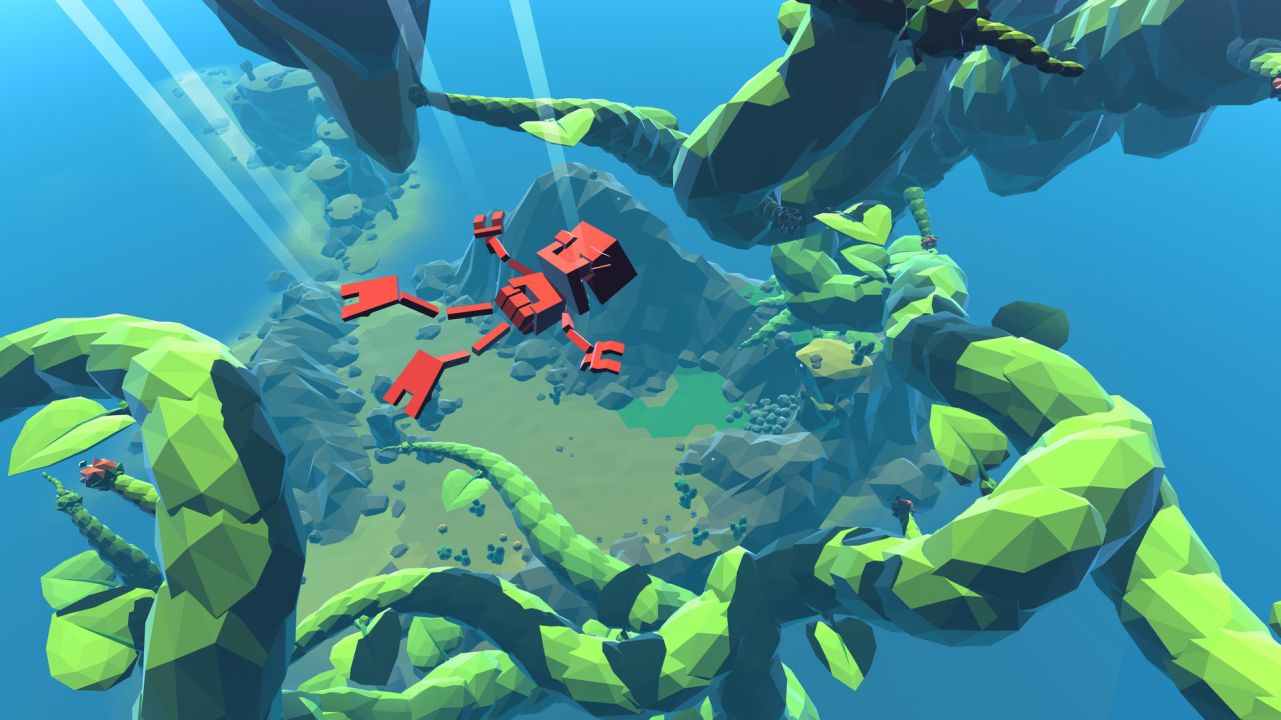 It's disarmingly cute enough for the 'wolf among the sheep' option, if nothing else. You are a small, boxy robot called B.U.D. – that's Botanical Utility Droid, if memory serves correctly – that moves like it's being held together with old elastic bands and sounds like a 56k modem in a bucket of soap suds, two qualities that make it ideal for the task of terraforming an alien world. You've been dumped out of your spaceship by the mainframe – not maliciously, just as a wake-up call of sorts – and you have to work your way up by slowly growing a giant space vine that's important for some reason or another. You have to grow your way home, as it were. See, we totally have a legitimate reason for titling the game like that. No, we haven't heard of Fullbright, why do you ask?

Alright, so what's it do that's so interesting? Well, one pair of words jumps out at you from the Steam store blurb: 'procedurally-animated'. Instead of fixed animations, B.U.D. is kept on his feet by what I can only presume are a nightmarishly fiddly combination of physical rules and constraints, which are supposed to keep all his body parts in the right place but are kind of easygoing about their job, if you see what I mean. Initially this doesn't appear to have much of an effect, other than enabling you to stumble clumsily everywhere like Nico Bellic with a belly full of cheap gut-scouring vodka, but once you realise that this lets you dynamically move your hands as you please, the prospect of scaling that towering polygonal beanstalk suddenly piques a great deal more interest. I've always had a passing interest in games that force you to micromanage actions that would ordinarily be mapped to a single button – the likes of Octodad and Surgeon Simulator spring immediately to mind – because even though they're deliberately unintuitive and janky without exception, I like to believe they show us a tiny, imperfect glimpse of what games could be capable of when we throw away our peripherals and find a way to control them via spooky futuristic brain waves. Grow Home is kind of like that, but for clambering all over stuff. Like all such games, there's a brief, highly embarrassing learning period where you're scarcely capable of scaling a garden wall without having to stop halfway up and untangle all your extremities from one another, but pretty soon the placement of your hands becomes second nature; as intuitive as pressing a button, minus the usual mildly-discomforting knowledge that the game is doing all the important bits for you. 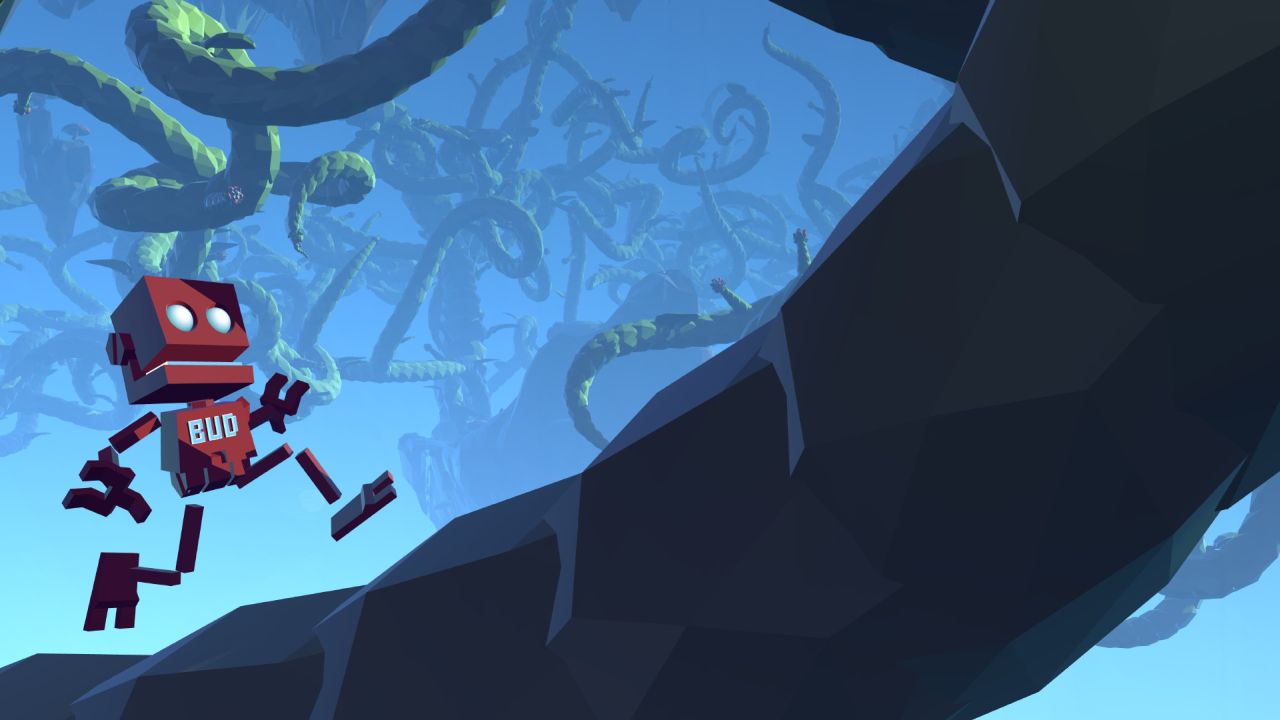 What I really love is how quickly that period of incompetence passes. Want to know what intuitive controls look like? You've struck gold. Left trigger for left hand, right trigger for right hand. Doesn't sound like much, I'm sure, but in a world where acrobatic protagonists just stick to walls until you have the common indecency to make them leap off and smash their smug faces into the ground, there's a special kind of connection to be felt with a character who only keeps his hands clutching the ledge as long as you, the player, keep your hands clutching the controller. Where Octodad used its unconventional controls as a unique, ever-present obstacle, Grow Home strives to use its unconventional controls to accomplish something that would be impossible any other way.

And what would dynamic climbing be without a dynamic environment to pit it against? More or less the same, probably, but that sounded good in my head so I'm sticking with it. It's the giant plant, you see. It sits as the centrepiece of the game: figuratively, as the one and only objective, and literally, as a gargantuan coiling, branching vine that dominates more and more of the landscape as it grows. Essentially, by grabbing hold and giving them a fond slap, you can coax the offshoots into growing explosively outwards, and if you're anything like me then your first instinct will be to try to get as many of them growing as possible just to see the Unity engine squirm under the pressure. Steer enough of them into glowing floating rocks - presumably full of whatever the outer space equivalent of top-dollar fertilizer is – and the main stalk will shoot onwards and upwards into the next area. Quite apart from making all the environments look like the Bed of Chaos's holiday photo album, it's a cleverly organic (no pun intended) way of visualising your progress, and I'd be lying if I said it wasn't hugely satisfying to take a few hundred steps back and appreciate your kilometre-tall alien bonsai as it corkscrews into the clouds. It may look fundamentally the same to everybody else's, but it's still yours. 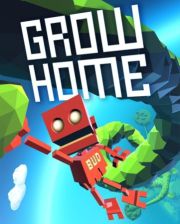