That's it? You've Gatta be kidding me.

There's a bit in the Terry Pratchett novel 'Making Money' where a bemused main character, struggling to come to terms with a deceased banker's vast collection of specialised fetish equipment, produces an analogy that's been stuck in my head the last few days. “I think it's like horseradish,” she says, regarding the cupboard contents, which are left more or less to the imagination. “Like... well, horseradish is good in a beef sandwich, so you have some. But one day a spoonful doesn't cut the mustard, and so you have two, and soon it's three, and eventually there's more horseradish than beef, and then one day you realize the beef fell out and you didn't notice.” That's Saints Row in a nutshell right there, isn't it? Somewhere along the way the whole 'crime' part fell right out of the wacky crime sandbox, and while the continuous ramping-up of absurdity has done its best to patch the hole in the last few instalments, there's a point where that has to plateau. At some point, as it were, you cannot fit any more horseradish in the sandwich. Where do you go after becoming emperor of the universe? Hell? It's just not the same kind of leap, is it? I know Saints Row: Gat Out Of Hell is basically DLC that spread itself across enough bases to merit its own box, but I don't see this problem getting any smaller with more money behind it. 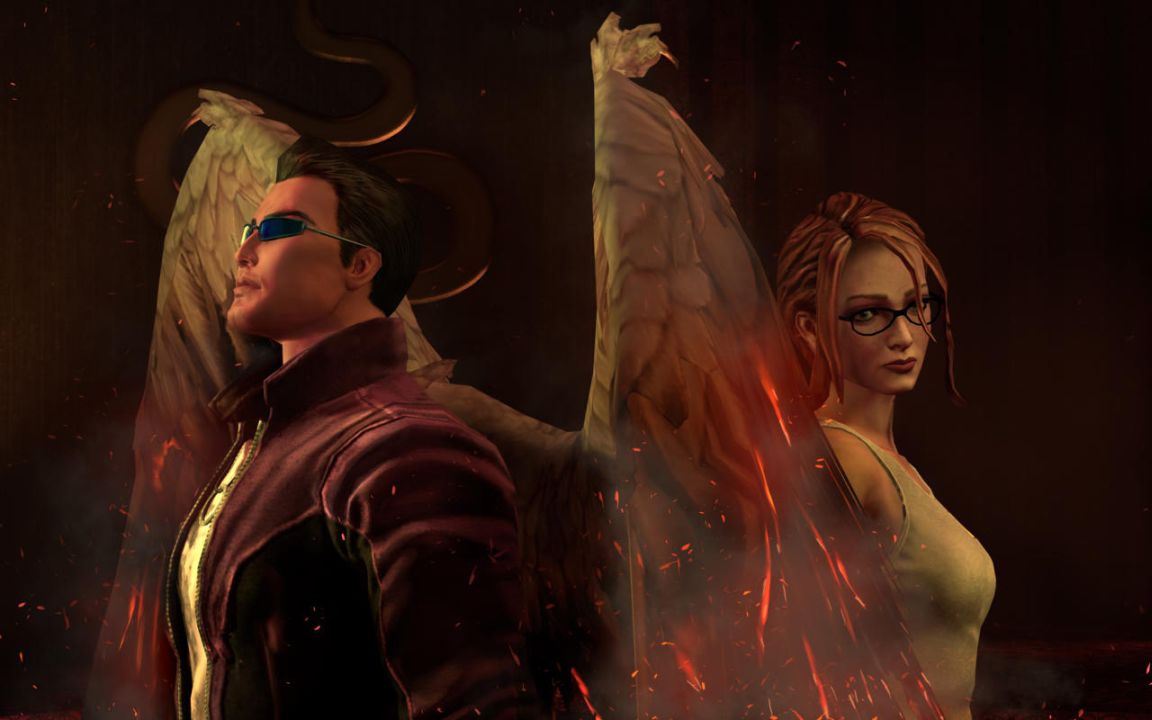 Anyway, Lucifer is out searching for somebody to marry his rebellious teenage daughter off to, and as far as he's concerned, the leader of the Saints is the only person in the known cosmos who has caused sufficient chaos to earn that right. Being an old-fashioned sort, he bypasses the whole 'invite approved candidates around and make meaningful comments at the dinner table' step in favour of simply dragging them directly to Hell – and in a nice little touch, the game even uses the appearance of your Saints Row 4 character in the opening cutscene if you happen to have a save file floating around. Johnny Gat goes in after the Boss because somebody picked him for the protagonist, and Kinzie gets to tag along for the ride because there's no way you can dump co-op functionality this late in a series. Pretty soon the game comes up with a contrived excuse for why you're morally obliged to cause pandemonium – as if players needed one – and from there it's pretty much Saints Row 4 all over again: cause chaos, finish minigames, find collectibles, and open wide every now and then for a big dollop of plot. Not a bad formula to follow, I suppose.

Having said that, there's something very cynical about how Gat Out Of Hell handles its storytelling this time around. Padding plot events with tangentially-related busywork has always been a staple of sandboxes, of course, but to go so far as to just give you a meter that fills up with every activity you complete smacks of just giving up altogether. “You know how this goes,” says Gat Out Of Hell with an air of infinite weariness. “Get out there and get into trouble. We'll call you back in for a cutscene when you've riled up Satan enough.” There's hardly even any meaningful connection between the damage you're causing and the events that follow; stuff just happens to occur once you've arbitrarily filled up enough of the meter. Not that I have any right to complain: the game snuck in a self-depreciating joke about it first, which means it's totally okay. 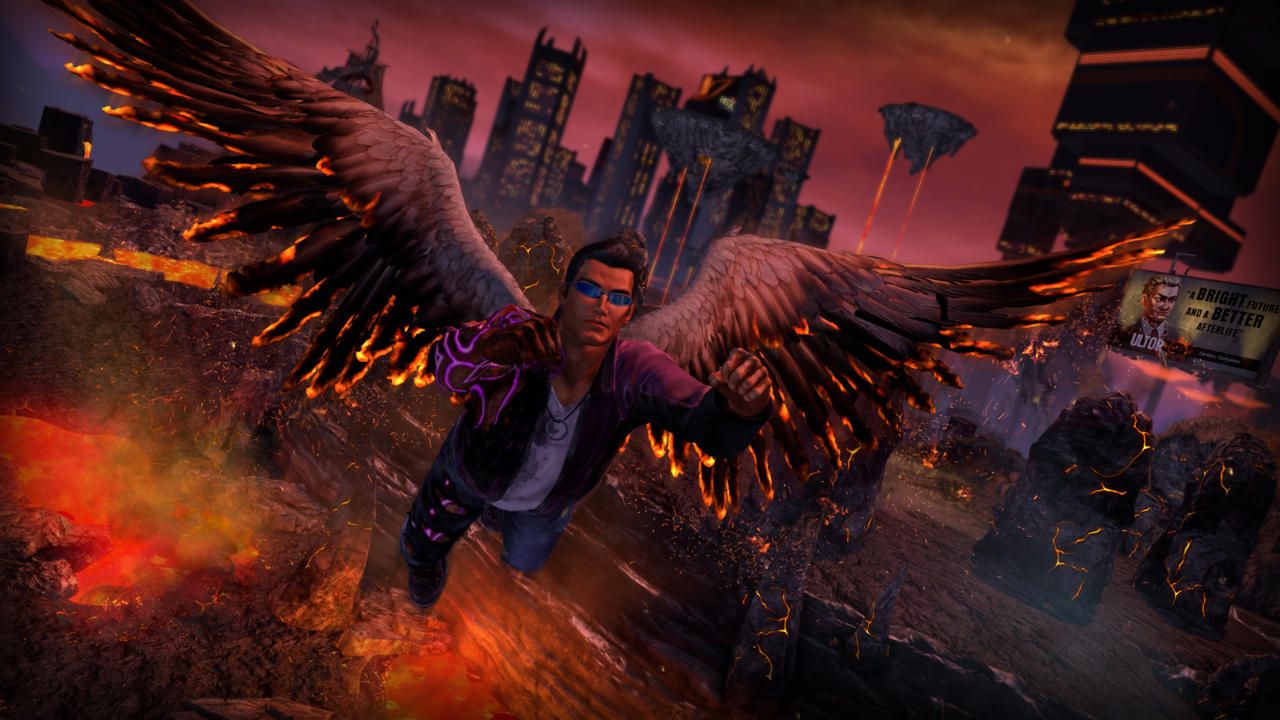 The strange thing about Gat Out Of Hell is that even though it's technically more of an expandalone than a proper entry in the series, it packs in a disproportionately large amount of new content. Saints Row 4 got a bit of flack for rabidly recycling resources from Saints Row 3 – sprinkling Steelport with a load of eye-wrenching neon and trying audaciously to pass it off as a big psychological thumbscrew, for starters – but it got away with it because your superpowers put a whole different dimension on the city and how you traversed it. Here, it feels almost as if the approach has been reversed: you have a whole new city to play around in, full of new enemies, locales, weapons and vehicles, but the core gameplay is pretty close to unchanged. Welcome to New Hades, I guess. One wonders why they even bother still setting the games in a city when the plots have about as much to do with urban domination as they do with appraising fine bone china, but here it is nonetheless: part brimstone, part sleazy commercial dump. I'd say it feels a bit cozy for a place that allegedly houses every dead person who ever skipped church on Sundays, but that might just be because I'm able to effortlessly soar over it all like a morally-flexible Batman.

Yep, wings are the big new addition, being one of the few paltry gameplay features not acquired by slapping the Saints Row 4 design document in a photocopier, and surprisingly for something that's been pushed literally front-and-centre – check the box-art – they're not half as gimmicky as you might expect. In every sandbox I can recall, I've always sought out the cheap thrill of hijacking a light aircraft and flying it as close to the ground as possible, clipping lamp-posts and giving the taller pedestrians impromptu haircuts, knowing it's only a matter of time before I botch a miniscule adjustment and end up on the nine o'clock news. It's all about dealing with immediate obstacles, boiling down a big bloated sandbox world full of loosely-connected mechanics into an exercise in pure, hair-trigger manoeuvring. Gat Out Of Hell successfully recreates that kind of self-inflicted challenge – minus the kerosene fireballs and tedious treks back to the airfield – deviously placing its upgrade clusters in such a way that you'd be mad not to dive under catwalks, fly through tunnels, and weave between bridge pillars with every opportunity you got. When just getting from point A to point B is that exhilarating, your sandbox is putting its best foot forward. 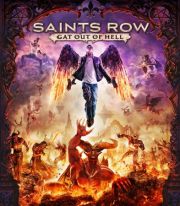 All videos for Saints Row: Gat Out of Hell (5)
Advertisement ▼