While I may not love the Japanese culture as some do, I certainly have a level of respect and admiration of it. The ideas, visuals, and characters that come to life in Japan are often curious and sometimes even fascinating. With that in mind, and having played numerous other "unconventional" experiences from Bayonetta and Asura's Wrath to Metal Gear Rising and Vanquish, I approached D4: Dark Dreams Don't Die with some interest. An episodic, narrative-based adventure supported by Microsoft and created by Access Games and Hidetaka Suehiro (SWERY) sounded like a recipe for something truly unique. And while the game does fill the oddity meter with grandeur, the rest of the experience is severely lacking. 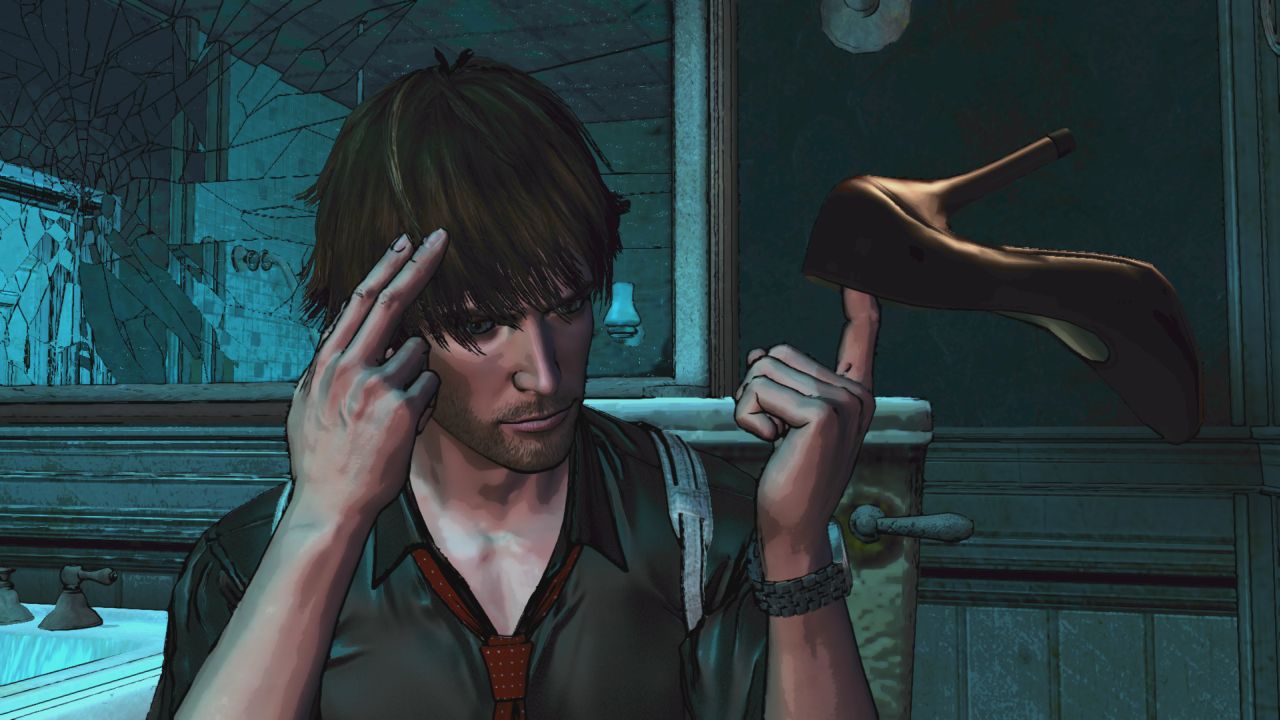 Players assume the role of David Young, a private investigator who used to work for the Boston PD. We learn that his wife was mysteriously killed, and he cannot remember the events of that night. However, the traumatic experience has given David a new ability – to travel back in time and relive certain events by using mementos. These items dictate the location and point in time that David can travel back to. It's an interesting concept, and to see how the narrative can navigate the logical loophole minefield of time alteration is thrilling. In theory.

I say that because we never actually see how the story pans out. Like Telltale games, D4 is structured as an episodic TV show, complete with intros/credits for each. However unlike the former developer, Access Games chose to release all they had at once – so for $15, you get a prologue and two episodes. That's right; you basically only get to see the beginning of the tale, and the game ends abruptly on a cliffhanger that's clearly meant to lead into more episodes. It's really no different than playing through only two or three episodes of The Walking Dead or Wolf Among Us. The problem with D4, however, is that the "season 1" is marked as complete by the developers, meaning we may never see another. So in its current state, D4 is half of a story that lasts barely 3 hours and may never see a conclusion. Is that what you really want to spend your time and money on?

But let's assume you really love SWERY's unique world and characters, perhaps thanks to Deadly Premonition. In at least that case, D4 does offer something worthwhile. This is a truly odd experience, with wild and over-the-top characters, and environments that will have you questioning what is real and what is just a figment of David's imagination. You have a girl who behaves like a cat living in your apartment. Is this really a person, or just David's twisted vision of his pet? You meet characters such as those that love the concept of avant-garde and have a personal mannequin, take recreational drugs, are very tall and speak slowly while holding kitchen utensils; others simply fulfill stereotypes and tropes. While some may find characters such as this fascinating, I usually look for other aspects to support the weirdness of it all – such as a strong narrative or engaging gameplay. Sadly, D4 offers little else to help elevate its eccentricity. 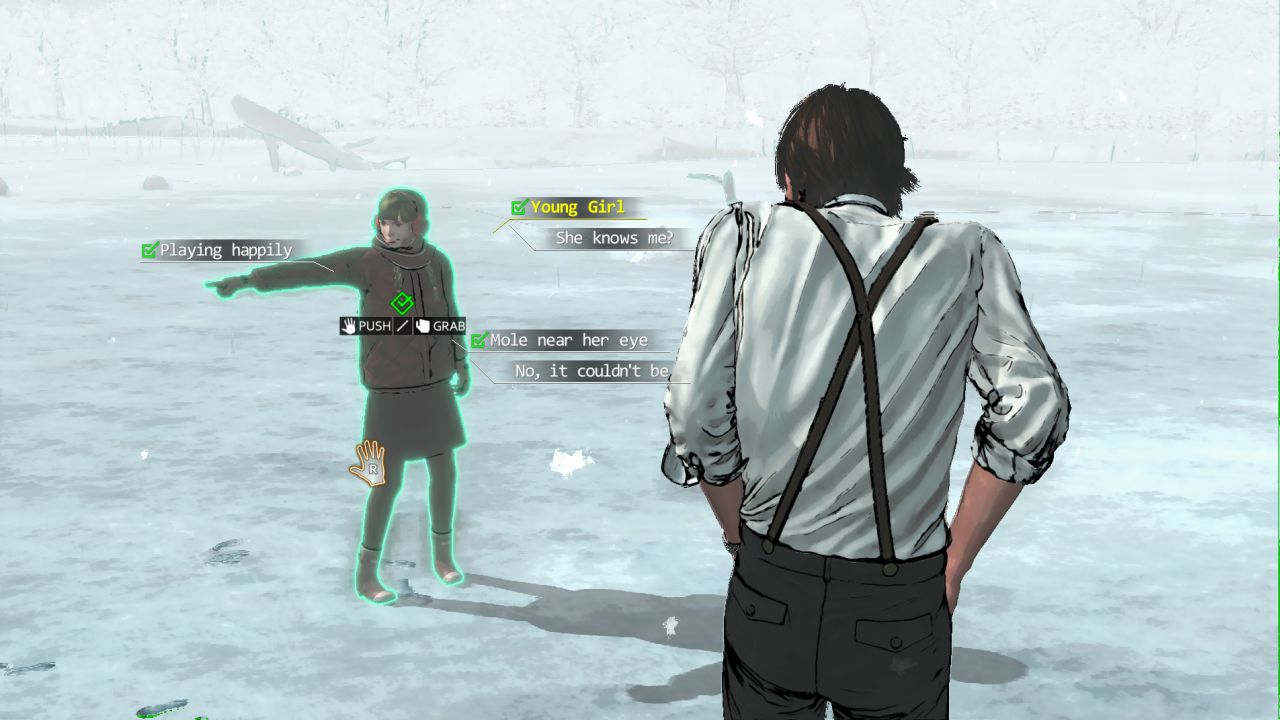 The gameplay primarily consists of exploring and interacting with environments and characters. Your movement is pre-set on linear paths, more akin to classic adventure games rather than the more modern third-person exploration from Telltale. You can interact with items by picking them up or pushing them, and there is no inventory to speak of. Chatting with characters can be either in cutscenes or with infrequent dialog options. And of course, there are occasional quick time events during action sequences.

But rather than let things be, D4 needlessly complicates things. You have three meters – an action meter, a vision meter, and a health meter. You earn points (the game's currency) by interacting with environments, and just playing through the story. The vision ability helpfully highlights all intractable objects in the environment, while health is reduced if you fail during the QTE action sequences. Both these meters can be refilled by picking up items scattered across the game or buying supplies from your cat (this is a weird game, remember?). The action meter is the one that affects gameplay the most – everything you do, from walking to opening cupboards to speaking to characters, takes away from this meter. So if you want to keep playing, it's best to keep this meter filled by eating foods. Again, the game further pads the content by giving you various items and goals to spend points on, such as rare foods, health kits, new outfits, and a music record collection. It all seems unnecessary, as if the game really didn't feel confident in its story or setting, and needed to include more mechanics just to add unnecessary depth.

Even if you get past all that, thanks to an often awkward camera and limited interaction options, D4's gameplay feels restrictive and very on-rails. It also doesn't help that the game is designed around the use of Kinect. You can interact with the game by using only your hands and voice, but expect it to be more time consuming and on-par with most other games that disappoint with the accuracy of motion controls. There's thankfully an option to use a controller, though little work was done to adapt the game's UI or inputs for those who choose to play without waving their arms around or speaking. 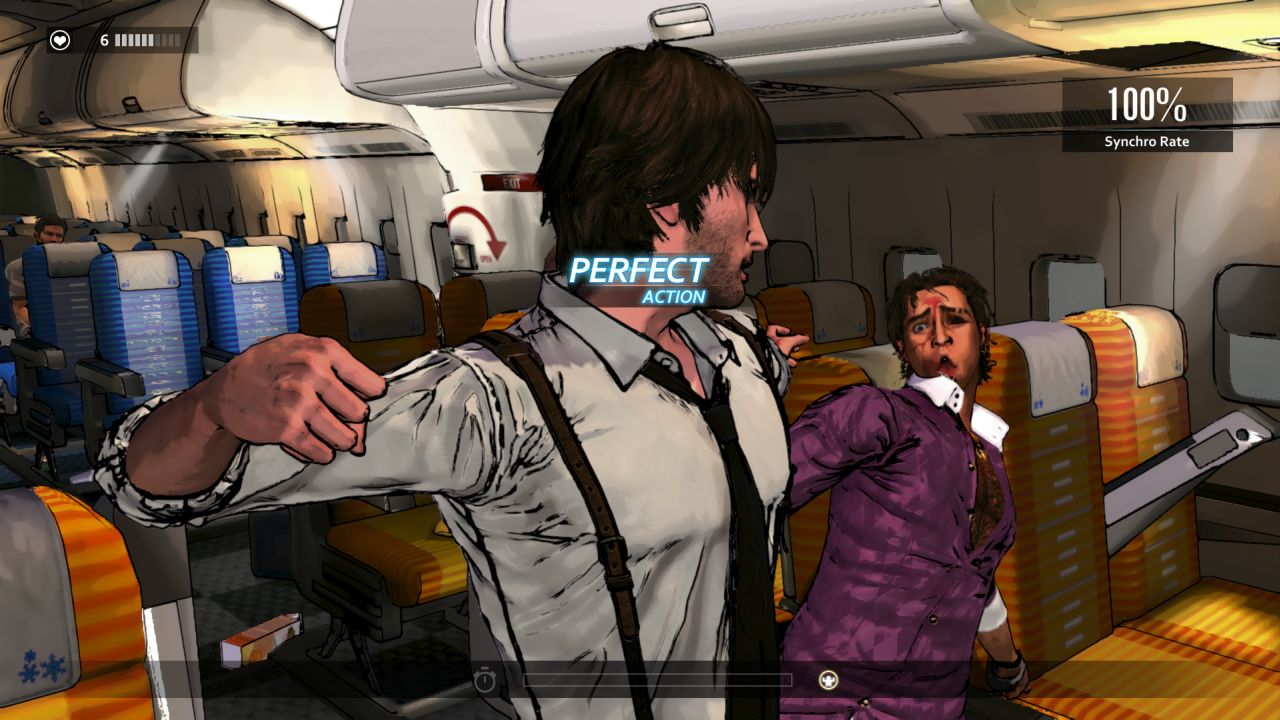 To match the game's eccentric setting, the visuals are similar to a comic book with cel-shaded style. No More Heroes comes to mind as a close comparison. Surprisingly, the game's soundtrack is what stands out the most in the presentation. From high quality and well composed original music tracks to some a great selection of songs that manage to fit the atmosphere perfectly, D4 succeeds in its audio design. Except for the voice acting, that is, which suffers from either poor translation or amateur delivery. There aren't any technical problems to speak of, with brief loading times and a steady framerate.

D4 is an at least intriguing experience, but one that cannot be recommended. The world and characters that populate the game are outspoken and strange, so if you're into that sort of thing, there's probably some value here. But if characters from The Fifth Element were too much for you, this is likely not worth your time. It's also not worth your time if you are hoping to play through a complete story, one that isn't bogged down by unnecessary gameplay mechanics and awkward controls. If you have Xbox Live Gold and it's still January 2015 so the game is free - then sure, give it a try and maybe if enough interest is gathered, another season will be made to conclude the story. But anyone who chooses to spend money on D4: Dark Dreams Don't Die Season 1 in its current state, and having read this review – well, you might just be crazy enough to be in a SWERY game one day.

Our ratings for D4: Dark Dreams Don't Die on Xbox One out of 100 (Ratings FAQ)
Presentation
75
Cel-shaded graphical style matches the game's whacky aesthetics. A surprisingly good soundtrack. Voice acting is not up to par.
Gameplay
55
Largely on-rails, filled with unnecessary gameplay mechanics, and QTEs. Annoying camera.
Single Player
45
Over-the-top characters overwhelm a story that has the potential to be interesting. But there's only half of a story here, anyway. Some replay value from optional objectives and potentially different dialog.
Multiplayer
NR
None
Performance
80
No problems. Navigation is problematic whether you use the Kinect or a controller.
Overall
59
Dedicated fans of Japanese absurdity may find something worthwhile in D4. Everyone else will be stuck with an unfinished story and unsatisfying gameplay, for a price that seems too high for just two episodes. 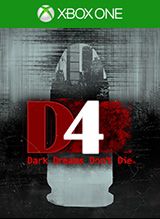