Dying for some light coverage, are we?

Say what you like about Techland – I won't, mind, because we'd probably be here all day if I did – but they certainly aren't afraid to tackle the tough issues in first-person games. Their continued attempts to make first-person melee combat that doesn't feel like flailing around with a pool noodle – successful or not – are inspiring stuff, and with Dying Light they're piling on another hugely ambitious goal by trying to make first-person free-running that doesn't feel like a found-footage film being played through a periscope. I feel like I'm watching somebody who just really wants to help with Bonfire Night, but they're so eager to get firewood that they're shouldering what appears to be half an uprooted pine. Put the bloody tree down before you herniate every fleshy bit in your upper body, you idiot.

So after waiting in line next to a bunch of people who really wanted to see what next-gen graphics could possibly contribute to a hook-shot craniectomy – the new Mortal Kombat was in the same booth – I got my mitts around a slightly sticky controller and gave Dying Light a go. Needless to say, the PAX demo didn't waste time on exposition, inelegantly booting me out of a safe-house and giving me vague instructions to go recover an outpost, but frankly I think I was probably even less interested in the plot than the people participating in the spine removal party behind me, so it worked out alright. Clutching my spiked baseball bat to my chest, I gazed around at the grey, ruined city, momentarily overwhelmed by the fresh blast of freedom that surely heralded a— wait, you only get five minutes? Never mind all that; I have an objective marker to chase.

The first thing that became apparent – cautiously foraying beyond the small courtyard that constituted a safe zone – is that hitting things with a stick in Dying Light, while not a particularly complex activity, feels really, really satisfying, which I suppose it ought to considering the game's focus. It's not so much the result of any particular ground-breaking feature as it is a product of factors that are – for a preview, at least – surprisingly polished. The responsiveness of your swing sits in that sweet spot where it's slow enough to lend the weapon some weight but quick enough to be practical in a frantic brawl, and when it actually connects with something there's a wonderful convergence of effects, from the way the camera jolts, to the meaty thwack of the impact, to the way the controller shudders like a piece of rebounding flimsy wood, that genuinely makes it feel – if I may rummage around in my wheelie bin full of stock game journalist adjectives for a moment – visceral. One wonders if the mechanics can live up to the presentation, though: as far as I could tell, the actual business of melee combat consisted almost solely of one-button mashing, and while the full game's purported weapon variety will probably liven that up a tad, it's uncertain whether it'll be enough to prevent the act of flattening a zombie's face from becoming a tedious production-line job.

Really though, the relative danger of taking on multiple foes combined with the sheer apathy of the hordes of undead crowding the streets – heck, I've seen street salespeople willing to chase me further down the footpath than this lot – should be enough to clue you in on the fact that killing everything that moves isn't the way to go. While you're still not going to get from A to B without caving in at least few skulls, the focus is clearly more on avoiding the zombies and skirmishing only with those that get between you and your goal. Time for that totally radical first-person parkour to step in and do its stuff. 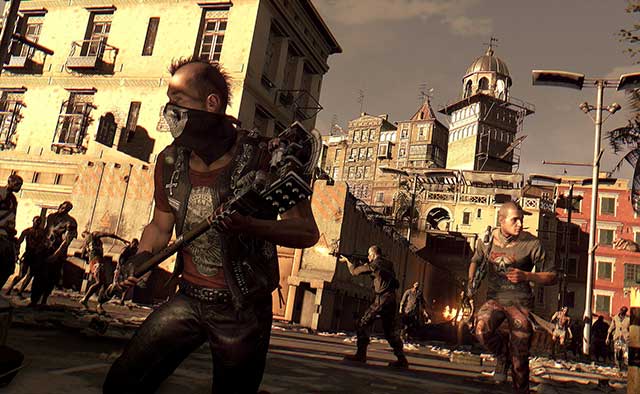 Well, colour me underwhelmed. You can jump, run, and mantle ledges, meaning that the only thing differentiating Dying Light's movement from your average run-of-the-mill shooter is that you're no longer completely stymied by shoulder-high obstacles. If free-running is this simple then I think I need to invest in a pair of sweat-pants and a camcorder. Alright, so it's nice that the game actually demands that you make jumps with some degree of skill – and, judging from the environments, it'll be giving you plenty of opportunities to do so – but it's a somewhat clunky system that communicates the sense of fluidly traversing an urban environment about as effectively as riding a segway through a crowded shopping district with a bucket on your head. Still, plenty of time to improve things, right?

Trying to ignore the ticking timer in the bottom right, I continued onwards and upwards, my progress momentarily slowed by the arrival of some light rain – nice water effects, by the way – and an encounter with three or four zombies who just wouldn't take a light whack with a stick for an answer. You could initially be forgiven for thinking that the survival horror elements in Dying Light are pretty muted – considering the complete lack of pacing combined with the fact that a zombie in a one-on-one fight with you stands about as much of a chance as a beef pastie mounted to an upright rake – but in a group fight your own vulnerabilities really start to show. It's incredibly easy to get blindsided while you're trying to make sure one foe stays on the ground, and once you get overwhelmed you're likely to chew through most of your medkits – a resource that presumably doesn't just get handed out on street corners – faster than you can blink. It makes you feel vulnerable and encourages you to be extra-cautious without making you actually physically incompetent, which I think warrants a shiny sticker for Techland if nothing else.

Finally, I reached the pinnacle – both figuratively and topologically – of the demo, a shabby little hilltop collection of shacks and barbed wire made all the more pathetic by the miserable weather that battered them. In some misguided attempt to create a climactic boss battle finale to five minutes of stumbling around and hitting things in the face, somebody had placed a hulking sledgehammer-wielding fireman zombie in the middle. That is to say, I sincerely hope that it was a boss battle, because if they turn out to be a common enemy then I never want to clap eyes on this game again. Do you remember going toe-to-toe with zombies near the start of Half-Life? It was a simple, tedious routine: bait out the lengthy attack animation, dodge it, whale on the zombie while the gears juddered in its primitive AI subroutines, then repeat. Now imagine that being so much as lightly brushed by the zombie would floor you on your backside, and that repeated blows to its stomach had about as much an effect as they would on a seven-hundred kilo rhinoceros, and you pretty much understand how that fight went. Talk about ending with a whimper rather than a bang.

I can't help but think that Dying Light is the kind of game that's somewhat difficult to fully demonstrate in a short, hands-on preview. I'd love to tell you what I think of the crafting system, or the RPG elements, or the gun mechanics, but since I had barely enough time to brutalise a handful of zombies and fall off a brick wall I'm afraid you'll have to continue to speculate. One of the most touted features in Dying Light so far has been the day-night cycle, wherein nightfall brings out tougher enemies and forces you to go on the defensive, but all I was made privy to was a patch of grey drizzle. It's the kind of game that will, without a doubt, demand hours of investment at a time, but since DayZ regularly demanded that you walk down a featureless highway for hours without encountering so much as an inquisitive badger, I can't imagine that'll be much of a problem for this game's target audience.

Overall Dying Light shows promise in places, but – as I feared at the beginning of all this – it feels a bit poorly focused right now, running around with its head on fire trying to cram in everything we've come to expect from the sluggish tide of zombie survival games and open-world budget-breakers, to say nothing of the first-person melee combat and free-running. When you set up that many targets for yourself, you can't help but be a bit hit-and-miss. The combat is a definite improvement over Dead Island, the parkour is probably a great deal less interesting than you were expecting, and just about everything else is still a great big foggy mystery. What else can we do, but cross our fingers and hope that this rag-tag group of disparate features can band together in the face of overwhelming adversity? That's how zombie games work, right?