Initial impressions for Torchlight and Borderlands, comparing the two. Some more Uncharted 2 talk :)

I picked up two games this week, both on Steam. Torchlight and Borderlands. Would you believe that my Steam Account has 85 games on it? How about believing that my Steam folder is currently 192GB in size and has over 140,000 files? I've had to delete a few games to make some room.

I've played about 3 hours of Torchlight and about 2 hours of Borderlands so far so I can't really conclusively define either game. My initial impressions are quite different for both. I'm enjoying one and not really enjoying the other, I'm sure you can work out which based on my long impressions below! Keep in mind these are very early impressions, I'm curious about how either game changes after you put some serious hours into it.

Shooting works pretty well, lots of random guns but they managed to make the mechanics work well for rifles, machine guns, shotguns and pistols. If you manage to get connected online the netcode seems pretty good. The art st-yle graphics are good, it is very similar to Prince of Persia 2008 but with perhaps more paper cartoon look.

I'm not enjoying it; the vehicle controls aren't very good. There are spawn nodes where the same type of enemy will spawn 5 minutes after you just killed the same group from that exact same location. There is no atmosphere at all in the world, the game relies on being generic and somehow trying to exploit how silly it is (this may be a turn on for some people). With some over the top characters / enemy types. I tried about 40 severs to get a coop game going and connected to just two. Apparently you need to forward ports which is ridiculous, needs a patch asap.

Once connected I was with high level players and I gained 2 levels far away from the action just for being in the world for about 2 minutes. The second match I did lots of random quests at my level with higher level players who were nice enough to help out with good weapons. The quests were standard bore fest run here, get this, and kill this guy. I had to deal with many groups of dog like enemies over and over. The game relies on you to have fun by just killing generic baddies over and over doing so far nonsense quests in a bland world.

There is no "save" the game saves when it wants, which is usually at quest turn in I think. But say you made a trek across the level you can't save there, you must restart from a node in town, this is obviously done to make it coop friendly you just hop in or out of games. Lots of ammo and money scattered around from enemies or in storage containers but you have to press "E" to pick it all up, for ammo and money this is annoyingly unnecessary. Diablo st-yle music, it constantly saves so you can instantly leave the game and come back where you were exactly (preserving the entire world), dungeon crawling action, great loot system with constant upgrades and steady increase of items, pretty good art design great set of powers and skills, automatically pick up gold when you are near it, pet can sell your stuff while you bash monsters, good range of monsters. Treasure rooms, more action orientated with skill types. Some differences in weapons but allow you to play your own sty-le(dual weild, ranged, shield). Four spells to hold, might be things like summon skeleton or fireball.

Inventory is one item per slot no matter size, gems look tiny. Less character than Diablo games, npcs only have like "hello" then wall of text. Some samey looking levels even though they are meant to be random. Loot on ground has overlapping tags. Narrator can be annoying "you have triggered a trap" as flames come out of a barrel – thanks captain obvious.

So I'm really enjoying Torchlight on the whole, its simple fun and gets most of the action RPG basics right. I think there will be a patch soon to fix the loot on the ground where picking up rare stuff is sometimes very difficult.

Borderlands is not doing much for me so far (I'm level 10), I think it's design motto was "hey let's just shoot stuff together" which honestly doesn't do it for me. I do not think it's a great example of combining the FPS and RPG genres. The most interesting story aspect is the Angel Lady that talks to you from time to time.

While initially you might look at both games and say Torchlight is a casual, Borderlands is less so. I would disagree with that from what I've seen. Torchlight has far more depth in your equipment, skills, pet, attack combinations than Borderlands has had so far. Borderlands seems to be entirely casual, lets join coop and kill things with our guns+2. There are similarities between the two games, they both rely on a loot system to keep the player going I guess and both are doing a decent job with loot. Torchlight has a better story than Borderlands – and Torchlight hasn't got a great story believe me.

Of course these are initial impressions; I've only played a few hours of both. Things could change and please don't take offense if you are really enjoying Borderlands

, it's just an opinion. I'm hoping things get better and they patch the co-op so people don't need to forward ports.

I finished Uncharted 2 again on hard, solidifying the game being among the best. The experience was actually better the 2nd time and difficulty wise it was fine because I knew what was coming. I don't think I will try on Crushing, no need to ruin my experience.

I've tried online but it hasn't been a great experience, matchmaking keeps putting me in with American players and there is some noticeable lag doing things like punching (eg I press punch, I see myself die, then I see I punched some guy to death) I'm not really sure if this is how matchmaking functions on consoles (i.e. very poorly) or is just a quirk with Uncharted 2.

Has anybody used Xfire game store, or heard any good or bad news about it? I'm tempted to give it a try and see how it compares with others. It's always better to have lots of competition out there, gives consumers more options, lowers prices. 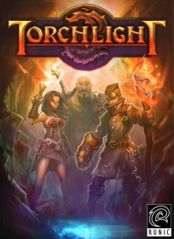 Our Review of Torchlight
83%
Great
The Verdict:
"Torchlight has wondrous high intensity combat and a magnificent loot system offering countless hours of enjoyment."
Game Ranking
Torchlight is ranked #261 out of 1815 total reviewed games. It is ranked #15 out of 69 games reviewed in 2009.
260. BioShock 2
PC
261. Torchlight