The original Tropico was a clever and different city-building game with enough unique style to help separate it from other RTS games in the genre. Tropico 2 arrived later, which was not received as well by the critics and fans due to core gameplay changes that simply did not work. And so was revealed Tropico 3, a spiritual “re-invention” of the original classic which promised nothing more but to bring the classic game to the modern audience with a few adjustments, and without altering the original formula too much. To this end, Tropico 3 delivers on its promises - the gameplay is instantly familiar to the fans of the original, and the new 3D world with great graphics and a re-energized soundtrack helps further promote this sequel. This time around, developed by Haemimont Games and Kalypso Media, the title pulls off interesting city building mixed with stellar and enjoyable presentations. The formula of the original was shifted a little to ensure good replayability was added and any core gameplay annoyances fixed, to the pleasure of the fans. However, this also means that the game continues to be a bit too complex for some fans, of which more is described later.
Tropico 3 comes with a 15 mission single player campaign, in which you are faced with 15 different islands as you attempt to bring them to economic and social glory while remaining in power and achieving various mission-specific goals. The missions need to be completed in a pre-set order, as the difficulty of the objectives scales with each new island you unlock to play with. There is enough gameplay in the single player campaign to keep you busy for quite a few days, if not more depending on what difficulty you chose to play on. The game also has a Challenge mode, where you are free to set some starting conditions (to adjust the difficulty) and you must once again complete certain goals in order to win. These challenges are similar to the campaign missions, though they provide some flexibility in how you wish to undertake the objectives. The Challenges are also mod-friendly, and are designed for the community use, so chances are good that soon there will be plenty of fun and difficult challenges made by other users to be downloaded. Lastly, the game also comes with a full sandbox mode where you are free to setup the game exactly as you would like it with no final goals.
Much like the original game, Tropico 3 does a lot of things to separate itself from other city building games, such as Cities XL and SimCity series. For starters, you get a choice to create your El Presidente avatar which you will keep for the rest of the mission. This process was also found in the original, however this time around you get to customize yourself with various clothes and accessories for hilarious or intimidating results. Just remember though, that your appearance makes no impact on gameplay – instead, you must set character settings for your avatar: how you got into office, your strengths and your weaknesses. These characteristics will bring different positive and negative adjustments to how your game will play out – for example, selecting to be an Heir to the throne will increase your popularity with the military but will likely offend the educated population. Choosing to be a womanizer as one of your negative trends will cost you points with the whole female population. There are tens of various traits for all three of the options you must select, and they provide for interesting scenarios and replayability. Once you’ve created your leader, he will become the sole person you can directly control on the whole island. You can move yourself around town to inspire or scare people, give speeches, or simply oversee construction of a new building to make it go faster. The people of Tropico will remain loyal to you as long as they are fed and happy, even if you cancelled all elections for the past 20 years and killed your opposition members.
123Next 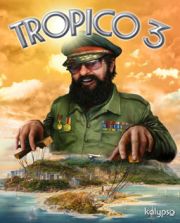