To facilitate your survival against each of the three enemy types, you can craft an array of items from blueprints scattered around the station. Throwable items include noisemakers, EMP grenades and smoke grenades. The EMP grenade will disable Androids for a short time so you can give them a one-two punch with your melee attack. When Ripley throws these items, they rocket forward with such force that they can land just about anywhere. Precise placement is near impossible and even when the noisemaker lands approximately where you wanted, the Alien might ignore it. 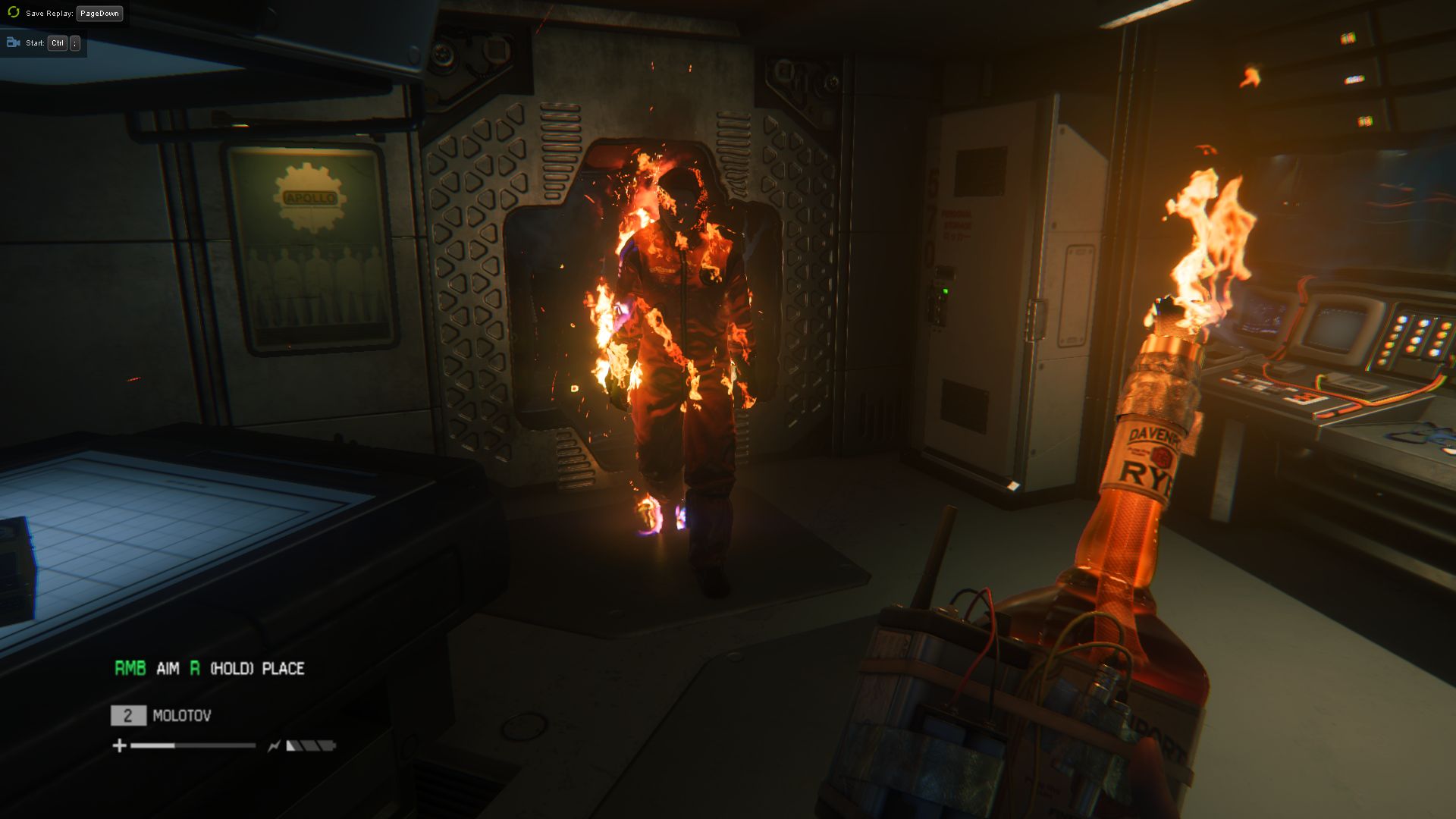 Want some Rye forged into a Molotov cocktail?

Few of the crafting items seem necessary. Why do we need to jerry-rig a complex noisemaker device when throwing a flare produces similar results? Why couldn’t we throw one of the many bottles of Rye scattered around the station to produce an audible distraction? Why does there need to be so many crafting components when a funds-based system would suffice? If the rewire mechanic was more comprehensive, allowing you to change more conditions across the station, it might render most items redundant. Much of the crafting is unnecessary clutter when all you need to make are med-kits. And they could have easily been placed in the world individually.

For better or worse, Alien: Isolation is not a game without standard weapons. The first weapon you acquire is a six-shot revolver, but it attracts the Alien so it quickly gets demoted. The Stun Baton allows Ripley to get close to humanoids and put them down with minimal noise, but the lack of charges is frustrating. You’ll even get a shotgun and boltgun, used mostly against tougher Androids during the later sections. All of these weapons feel decidedly pedestrian and do not enhance the atmosphere. In fact, their existence feels out of place after you unload four shotgun shells into the Alien, who shrugs them off and kills you anyway.

The flame-thrower is a real game-changer, facilitating some of the best mechanics in the entire game. The core stealth design is refreshed due to a temporary shift in power. You’ll use the flames to fend off the creature while you perform routine tasks. Or maybe just blast the unsuspecting Alien with flames because it terrorized you for so long. After some time the Alien seems to learn, keeping its distance when it sees the flame or holding ground after you release a few short bursts. If you holster the flame-thrower and the creature reappears, you have my sympathies. 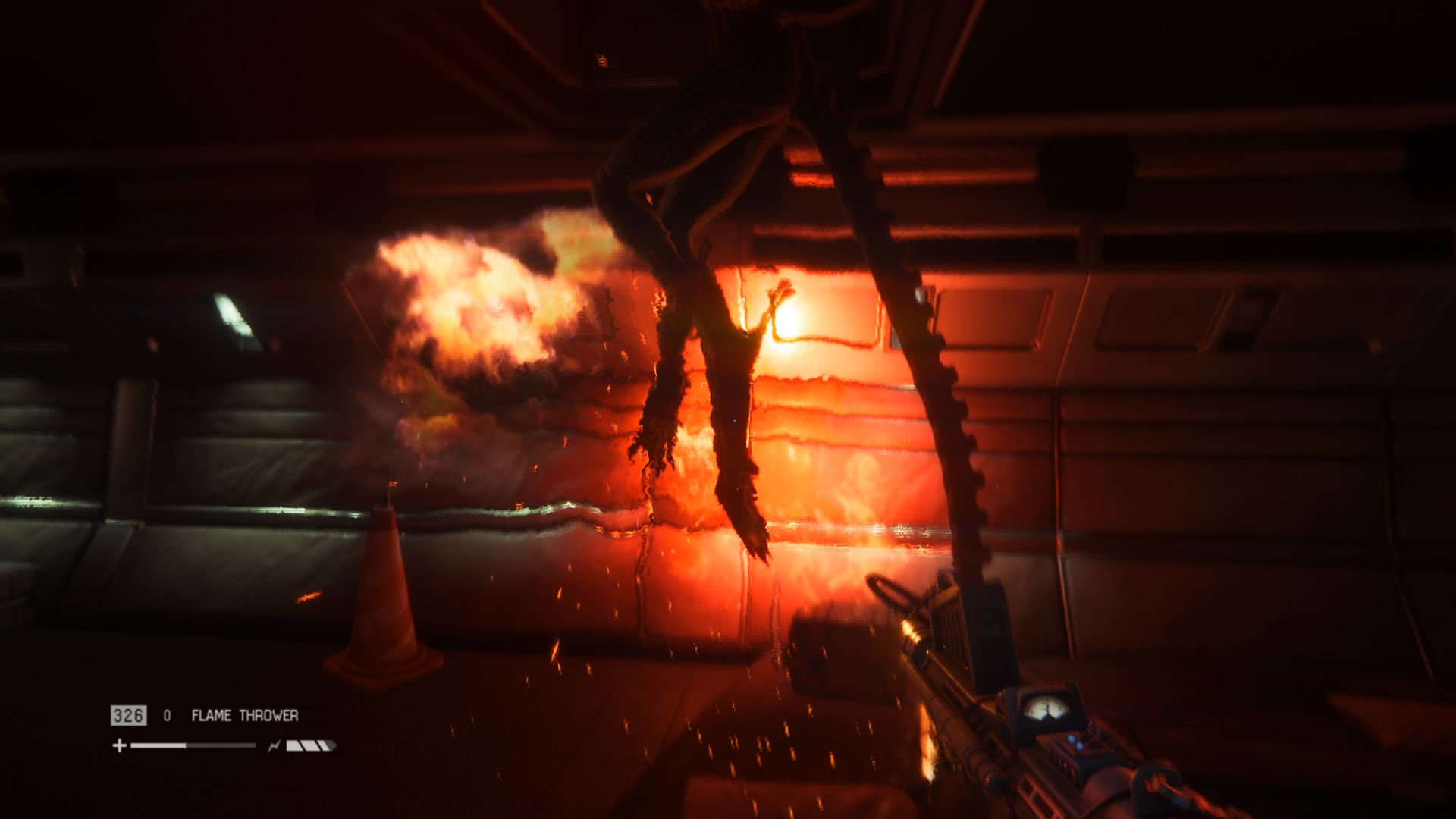 Flames send the alien back into the ducts, but don’t hang around

Watching the fuel on the flame-thrower gradually diminish creates palpable tension. Do you waste more fuel on another burst, to complete the objective quickly, or sneak through an area and preserve it? Moving through an area with 4 units of fuel remaining was analogous to the turret scene in Aliens, just enough flames to keep the Alien from pouncing.

All of the components are letdown by disagreeable pacing across the game’s two halves. In the first half of the game, the experience crawls along as you deal with the ever-present Alien threat. You will look back and realise how little you have accomplished and how long the game forces you to remain low-profile. Areas that would take you minutes to walk across take an hour because the Alien is on your back. The game pushes you into dawdling stealth for long periods without reprieve.

The second half of the game drags like razor-sharp claws on a chalkboard for a different reason. The Alien becomes scarce and you back-track through areas just to pull levers or shoot Androids. There are two monotonous spacewalks, which offer no urgency despite their imposing visuals, and a bizarre platforming sequence. This creates hours of unexciting gameplay that might send you into hypersleep. These docile sections would have been an ideal break from the smothering Alien during the earlier segments, but instead produce stagnation near the conclusion. 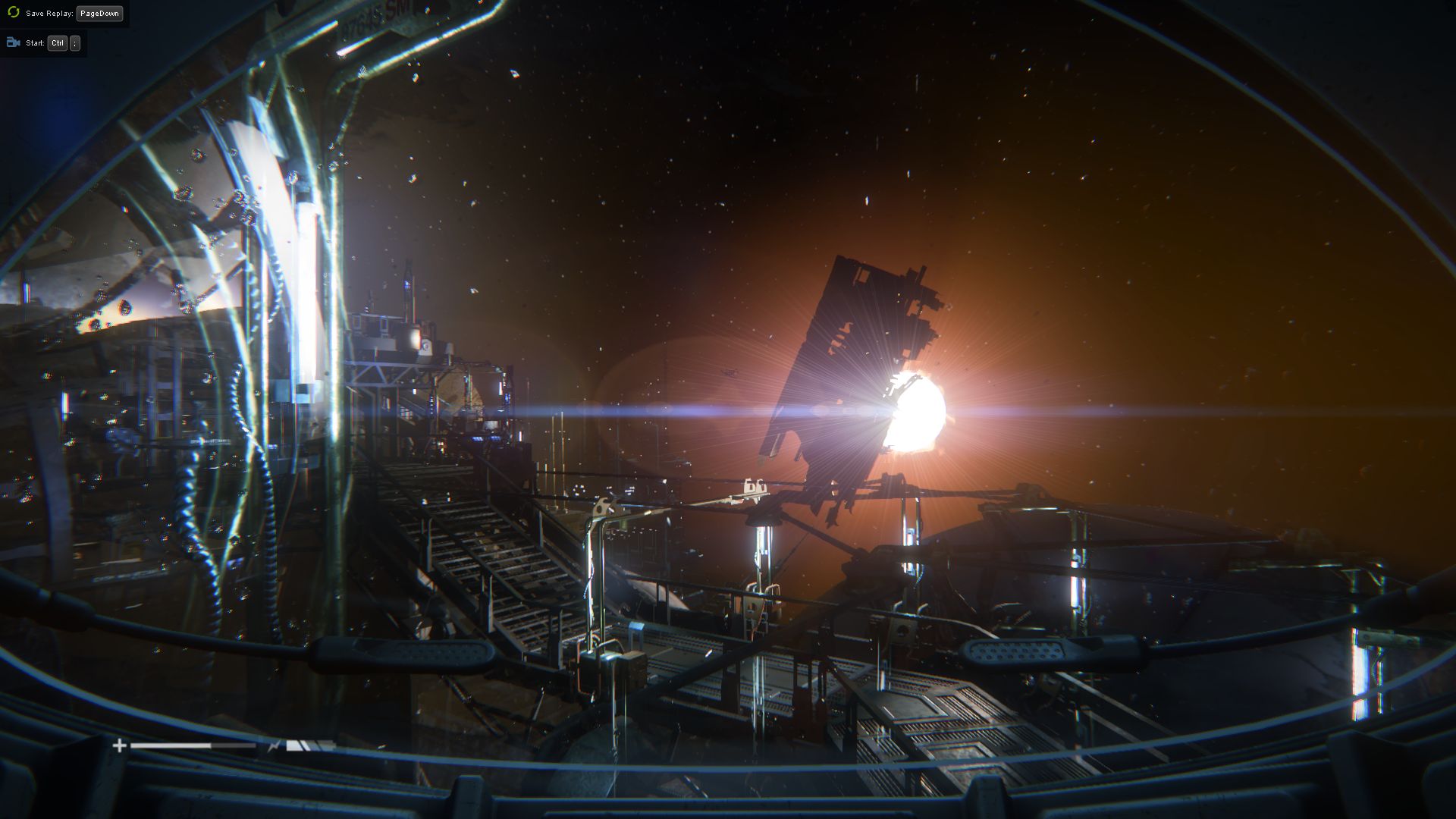 Spacewalks look amazing! Wake me up when they are finished

The campaign flow also suffers because the best finale actually occurs at the midpoint. What you think might be thirty more minutes of narrative cleanup is actually eight hours of finales. After each subsequent ending, the game will whisk you to the opposite side of the station and prepare for another contextually ineffective ending. All elements should have been compressed and reshuffled to create a genuine rollercoaster ride of fear and relief. Instead, it puts you in a haunted house for eight hours and throws you on a carousel for the final eight.

Alien: Isolation has all the pieces needed to make an excellent Alien experience. Unfortunately, some pieces are twice their correct size, upside-down or from a different puzzle. This leads to a disfigured final picture that does no justice to the fantastic setting. The Sevastopol station has real character and the design melds perfectly with the original movie. If the game matched the atmosphere, there would be no doubting its success. Instead, the game struggles to deliver an even, flowing experience. The atrocious human intelligence obliterates the believability of the world. The Alien reappears so often it is impossible to ignore the flaws. Even the weapons and crafting system adds clutter that takes away more than it adds. Alien: Isolation has good concepts, but most are eviscerated on execution.

Prev12
Our ratings for Alien: Isolation on PC out of 100 (Ratings FAQ)
Presentation
85
Excellent visual and audio package, consistent and aligns with the movie aesthetics. Sevastopol station is a worthy location for a horror experience.
Gameplay
60
The tethered Alien AI is a challenge and tracking it through bulkheads is exciting. Weapons and some of the crafting seem unnecessary. The human AI is as terrible as the monotonous lever-pulling.
Single Player
48
Dreadful mission pacing sees the game end at the middle and keep ending for another eight hours. It lacks interesting characters and smart dialogue. Some objectives are paper-thin and back-tracking is tiring.
Multiplayer
NR
None
Performance
(Show PC Specs)
CPU: Intel i5 3570k
GPU: Gigabyte 7950 OC 3GB
RAM: 8GB DDR3
OS: Windows 7 Ultimate 64-bit

84
Framerate is smooth for the entire adventure, controls are responsive and intuitive. There are low-level glitches but most will go unnoticed.
Overall
64
Alien: Isolation could have been a superb experience if some components were better balanced or removed. There is still enough tension to make you fear the dark.

All videos for Alien: Isolation (6)
Advertisement ▼