A breath of fresh, strawberry-scented air

Sometimes – particularly during the parts of the year where all the big publishers are too busy hibernating under a pile of money to actually release anything – I feel less like a reviewer and more like the curator of some kind of bizarre, carelessly-selected cabinet of curiosities. Merely informing you, the reader, that certain games exist out there feels more and more important in the light of the pitiful amount of attention they would otherwise receive, and as they move ever further from the land of conventional design, conventional criticism seems more and more irrelevant. “Ah, I see you've noticed our pigeon dating sim, sir. We only finished assembling its casing this morning. Unique, but quite mad, I'm afraid. And if you'll just follow me past the Roguelikes' Gallery – my little joke, sir, my little joke – I'll be able to show you our latest acquisition. Mind the rhythm-action game, those pixels are razor sharp. Right, now if we just remove this sheet... McDROID. Not the most extraordinary member of our collection, but what a conversation piece, eh?” 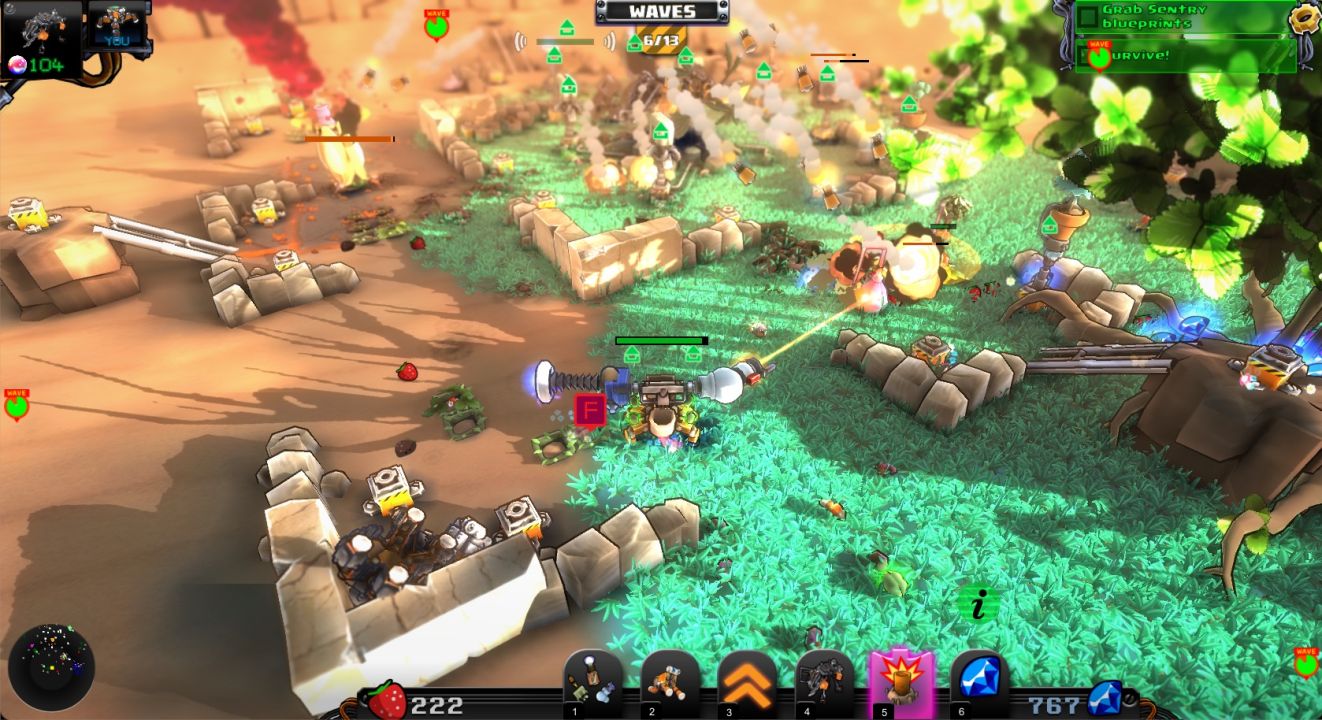 Sorry, I'll stop now. In all seriousness, though, just listen to this: McDROID is a game about a robotic dog – one that is apparently incapable of moving with any motion other than an adorable gambol – saving a sentient alien planet from a thinly-veiled parody of an agricultural mega-corporation, with the help of a talking lunar lander that runs on strawberry-based fuel and constantly blasts Sixties Rock FM radio. Should we really worry at this point if it's any good, or merely – in the vein of the Attenborough catching sight of a magnificent rare beetle – remain content with passively observing it? Well, the former, obviously, but that'll come in a moment.

Gameplay, too, is the sort of thing that I want to excitedly show to nonplussed people in the street. It's a third-person tower defence RTS, not entirely unlike Dungeon Defenders, but with a smaller-scale focus and a bigger emphasis on the tower defence mechanics. Unlike Dungeon Defenders, however, you are essentially defenceless on your own, so rather than standing on a parapet and taking pot-shots at goblins for ten minutes, you spend most of your time keeping plates spinning: placing turrets, repairing turrets, scooping up strawberries – the all-purpose magical resource of choice in this loopy children's television universe, apparently – deploying special units, and essentially doing everything you can to protect your shuttle. It feels somewhat strange at first to be playing the babysitter, almost entirely reliant on your towers for dealing with the encroaching hordes of relentless (but nevertheless kind of cuddly) monsters, but once you adjust to the reality of not being able to just wade into the fight and carve up enemies from square one, your role becomes surprisingly fun. It's the same kind of hectic, stressful, on-your-toes balancing act that makes more traditional RTS games either blisteringly intense, or – as my Starcraft II ventures have taught me, more often than not – shirt-rendingly frustrating, but with just enough of the sharp edge sanded off. There are, of course, still an ever-growing number of things yammering for your attention at any given time, but they're pretty chill about it and totally understand if you just want to go for a walk over that hill or whatever, dude. This isn't the kind of game where your economy bursts into flames if you forget to build another barracks every two minutes. 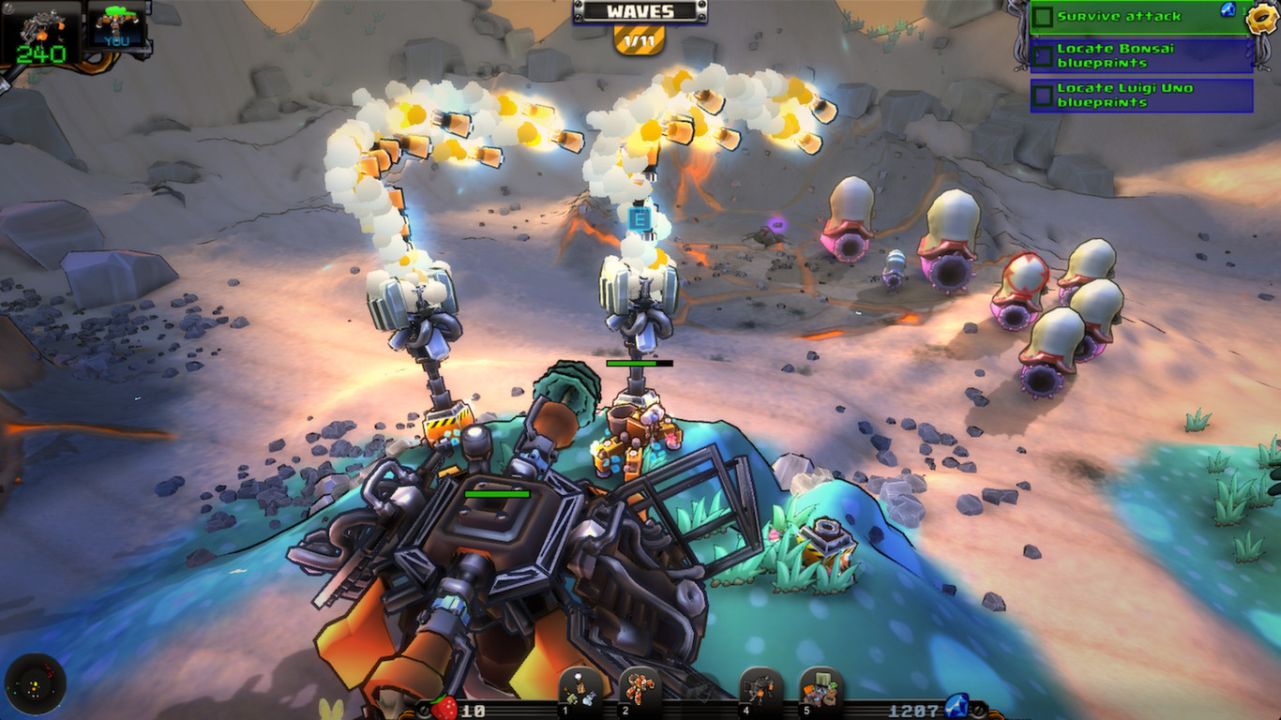 Oh, by the way, don't take that 'children's television' remark the wrong way, Elefantopia. It's all too easy to trash a game's narrative by comparing it to the lowest common denominator of storytelling – other than Neighbours, I mean – but for once, at least, that wasn't my intention. McDROID actually feels like a children's television show, albeit one with swarm missiles and land-mines, and frankly that's exactly the kind of improvement that would really liven them up. It all fits together: the surreal, psychedelic, brightly-coloured world populated by small adorable creatures; the wilfully innocent but anomalously competent main character, capable only of communicating with meaningless auto-tuned babble; and the amicably-voiced spaceship, narrating what's going on so cheerfully and calmly that I'm fairly sure the intrusion of a necromorph into the game wouldn't elicit any more than an upbeat “well well, what have we here?” from him. Even the laughably thinly-disguised anti-Monsanto message kind of works, although it still sweeps the 'Most Perplexing Video Game Plot Element' awards. What are you trying to say here, McDROID? That they're... bad? I could have probably glanced at the front page of any news aggregator you care to name and had that remind me just as effectively, thanks. I realise that the game's structure doesn't exactly lend itself to communicating complex ideas, but if so, why bring it up in the first place? Oh, whatever. It's all cute and fluffy without feeling the need to clamp a sugar factory outflow pipe over your lips, and I call that a definite plus.

If indie games have taught me one thing, though, it's that being cute and fluffy is just one tiny bitty step away from being tougher than a lump of mahogany with nails in it, and McDROID is all too eager to make that step. The first few levels are your standard 'tutorial with make-up on', gently explaining almost all – the crucial word being almost – the mechanics at work, but once you leave that calm lagoon the difficulty curve ramps-up rapidly until it's like trying to climb a pile of scrap metal with your teeth. For a game that thrives most when it's breathing down your neck, forcing you to run around the battlefield with your hair on fire as you juggle three turrets and a shipment of strawberries, that'd be all well and good, but towards the end of the campaign it gets frankly ridiculous. I'd try new formations, unlock upgrades, finally pull through by the skin of my teeth, and find to my dismay that the mountain I had just barely conquered was, compared to the next level, merely a pimple on the back of a grouchy base-camp caretaker. As of writing this I have reached a point where gumption, skill and a certain understanding of how to cheese things is no longer a sufficient defence against the relentless onslaught. It doesn't matter how quickly I start growing strawberries or how many towers I have when the first wave comes; failure is inevitable. In my current state, it's simply not feasible. 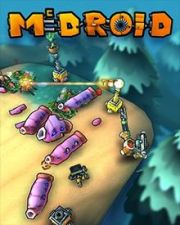