Unlikely to set your heart aflutter

The very first thing one has to do after purchasing Hatoful Boyfriend – before downloading the game, before installing it, before one does anything at all – is to justify that purchase. So here's my justification: I thought it would be a laugh. And therein lies my downfall, because I assumed there'd be a joke waiting for me. It had to be a joke, right? I can't even say the words 'pigeon dating sim' with a straight face. That might not be the most accurate measure, though, since I can't say 'dating sim' with a straight face either. Or 'bum', for that matter. We've certainly had our fair share of one-joke games in recent years, usually in the form of low-effort mock simulators; the kinds of games that sound hilarious on paper – and in obnoxious screamy Let's Play thumbnails – but ultimately boil down to one gimmick and some janky physics if you're lucky. For a while I was worried that Hatoful Boyfriend would go down a similar path, and that once the novelty of “ha ha, I'm trying to chat up pigeons” wore off I'd be stuck with the actual tedious reality of trying to chat up pigeons. That is to say, engaging in a lot of really one-sided conversations while staving off the sense that I'm slowly being covered in liquefied faeces. 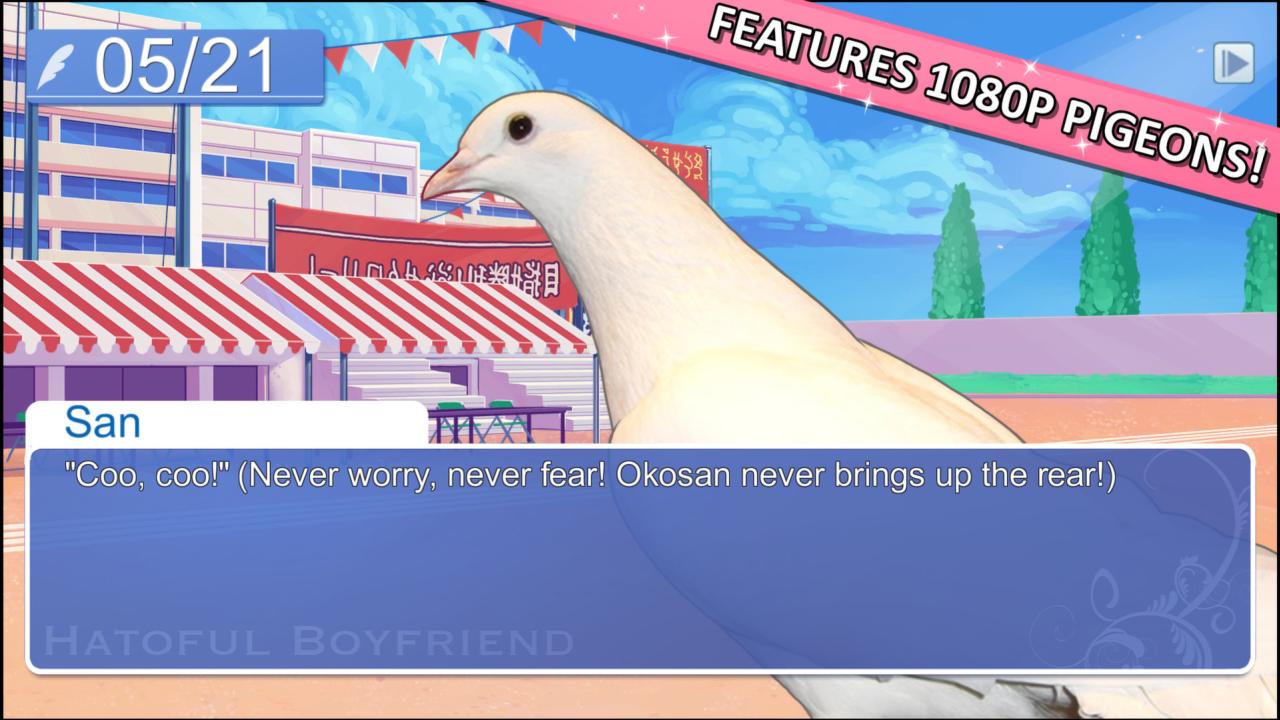 Hatoful Boyfriend tries, at least, to throw off that identity. The somewhat weak gag upon which it sells itself – that is to say, being able to call itself the 'best pigeon dating sim ever' – is but a point of entry into... well, I really can't even relay the premise without being struck with an overwhelming urge to stop and point out the ridiculousness of it all. You play Hiyoko Tosaka (canonically speaking, although the option to input your own name means that there are probably more than a few people out there playing as Expletive Expletiveson), a girl in a world where birds have somehow gained sentience, the intangible ability to operate doorknobs, and a certain level of integration in human society. You're the only human at a prestigious high school – yep, a dating sim set in a high school, because what we really needed was for things to get slightly creepy – and your objective is to... find love, presumably. I'm not sure if it ever gets explicitly stated, but I think we can ascertain that from the pink hearts all over the main menu. So you're looking for a Hatoful Boyfriend, I guess? I don't know what that is, and Google isn't playing nice with me.

The primary problem with playing Hatoful Boyfriend – one that ought to be obvious to anybody who hasn't recently gotten their head trapped in a cement mixer, but nevertheless bears repeating – is that as a visual novel it really does take fearful liberties with the concept of 'play'. Broadly speaking it's a story-driven decision-making simulator, which isn't entirely unheard of among non-visual-novel games – the likes of The Stanley Parable and Always Sometimes Monsters spring to mind – but such games usually have something that requires the player's contribution in between, even if it's just exploration. Here it's just text. Certainly, some of it is rather engaging text, but as far as interactive experiences go Hatoful Boyfriend is up there with lying sprawled on the couch, watching the person next to you speedrun a David Cage game. You do have character stats, strangely, and you can upgrade them at various pre-set points throughout the plot, but whether or not they have any effect on anything in the game beyond a handful of dialogue lines is a question that even the rigours of the scientific method have yet to answer. Maybe it's some kind of wink-nudge joke about pointless RPG elements. I daresay that Hatoful Boyfriend's proponents are currently constructing a counter-argument along the lines of “what d'you expect from a visual novel?” though, so let's just divert this train of thought before it arrives at Uncomfortable Conclusion Station. 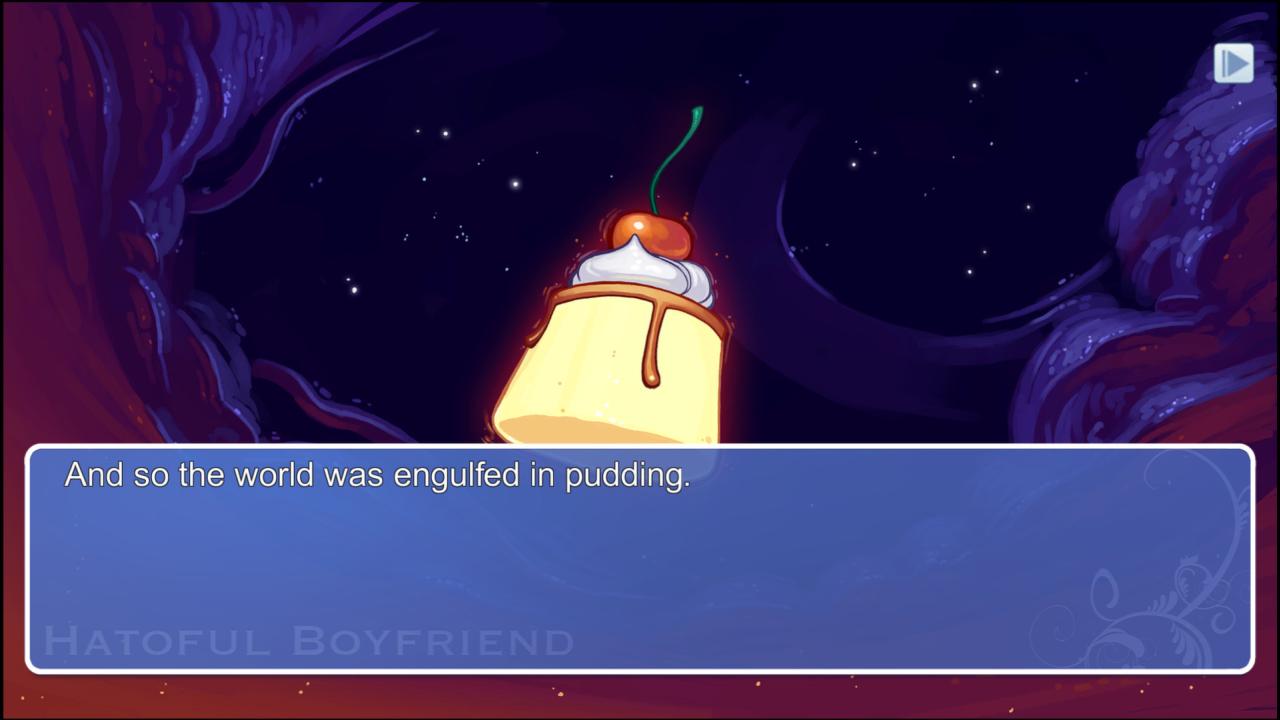 How about that plot though, eh? This one's a strange beast, not least because everything in it gets played unusually straight. At no point does Hatoful Boyfriend demonstrate any self-awareness or acknowledge the pure stupidity of its central concept; nobody ever stops to ask how a pigeon is capable of holding a pen or what exactly causes your protagonist to become romantically interested in a few kilos of feathers and bones, and though it feels like a missed opportunity to indulge in a quick gag here and there, I could dig that, you know? There's a kind of slow burn of entertainment to be derived from the absurdity of being surrounded by sentient birds without anybody involved batting an eye. The problem here is that the story, especially towards the end of several plot threads, gets particularly melodramatic at times, and like a bad poker player at a masked ball I just can't read its face. After all this light-hearted banter, am I really expected to take it seriously now? Am I supposed to be genuinely worried about what Shuu gets up to at night in the infirmary, or moved by the plight of Ryouta's dear old mum? Like it or not, we're still talking about pigeons here, and the storytelling on display just isn't engaging enough to make me forget that in any reasonable depiction they would exist only to deposit a foul-smelling mess on Nelson's Column, or perhaps on a comic-relief character. Wisely, the dramatics are kept in check – for the most part – with a much more appropriate counterbalancing dose of silliness here and there. In practice this means that the tone has the potential to swing wildly around like a cat tied to a ceiling fan, but hey, sometimes you just have to take what you can. I suppose the advantage to creating a pigeon dating sim is that no matter what drug-induced nonsense you commit to paper, nobody can ever accuse it of being too far-fetched for its context. Consequentially there are subplots where pigeon-centric political parties plot to commit xenocide and puddings engulf the world. See? I bet you didn't even blink.

There's definitely something deeper at work here than just misplaced melodrama, though. It's easy to point and laugh at Hatoful Boyfriend and then just move on, but the concept raises some surprising points on the nature of its genre. Though there is an option to give all your romance options a sparkly anime boy portrait when you first encounter them, but by and large you're just talking to pigeons. Does this influence your choices? Is this an attempt to create a dating sim where your goal is influenced by appearances as little as possible? Perhaps it's a subtle piece of commentary on dating sims as a whole; demonstrating that gamifying relationships like this objectifies characters to the point that they might as well be pigeons. Buggered if I know. Maybe I'm reading too much into this.