While most of these tools and items serve as additions to sword combat, Crystal Magic is an offensive type of magic returning from Risen 1 that can replace your melee weapon completely. You'll need to side with the Mages in order to gain access to it, but it makes you feel very powerful to wear a glove that lets you blast enemies with magical charges. Another change from Risen 2 is that you are able to have a companion with you from the start of the game. Companions are greatly helpful in combat and if you let them join, the early stages of the game are made significantly easier, although they can and will fall in combat if left to fight alone. Your companions will make contextual comments both in and out of conversations ala Mass Effect, which vary in quality from banal to highly amusing.

Almost all of your companions will simply attack enemies with swords, which feels like a bit of a missed opportunity for mixing up combat encounters. The ability to level up and equip your team mates like in other RPG's would have gone a long way to fleshing out this system. You will probably find yourself mostly using Bones due to his healing spell that is very useful. The health system in Risen 3 is the same as that in Risen 2; you can restore health slowly using provisions which are widely available, or immediately by using less common alcoholic beverages. As long as you have a companion with you, the difficulty of Risen 3 is manageable if not a bit on the easy side, but there are times when you will need to fight enemies alone. These are some very tough fights, meaning the game has a more traditional difficulty curve than previous entries. 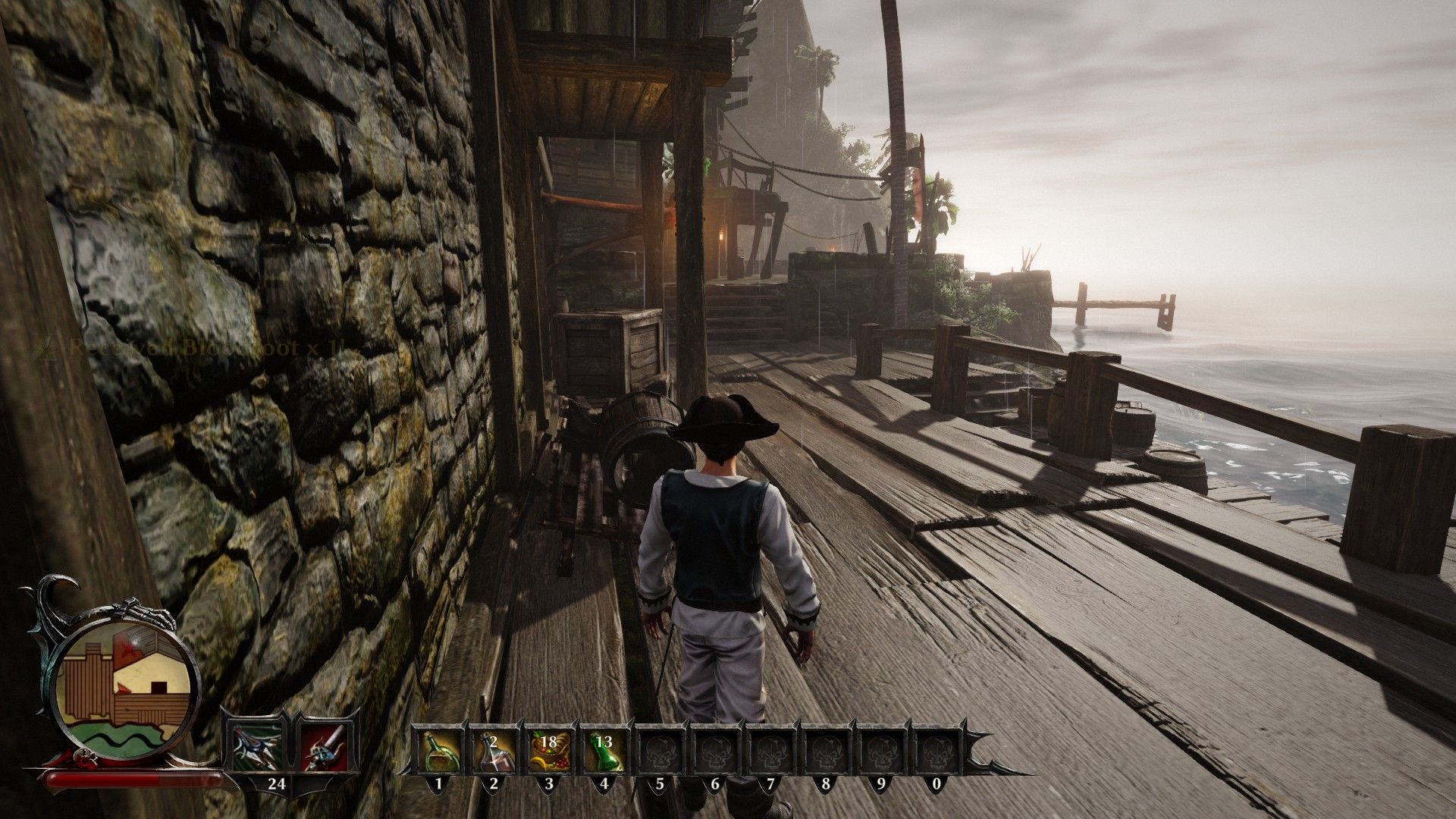 When it comes to leveling up and learning new skills, the glory/trainer system returns from Risen 2. Everything you do from killing monsters to completing quests will earn you glory which can be used to increase base attributes like toughness, cunning and melee. Once these are high enough, you can learn skills from trainers by paying them gold. The skills range from passive buffs to specific abilities like smithing, lock-picking and alchemy, to combat skills like the ability to Riposte or add a fourth attack to your melee combo. There are tons of skills to learn and all of them cost money so you will need to be deliberate about developing your character, especially early on.

One bewildering addition that is linked to the story is your "soul" level, which goes up and down based on how nice you are to people. I found it hard to resist choosing the often hilarious sarcastic or snarky lines that the protagonist delivers in a gravelly deadpan voice, so it annoyed me I was seemingly being punished for doing this. Whenever you choose to sleep, you go to the shadow-world and lose a bit of soul upon your return, but I never figured out what happened when you lost too much. Astral Vision is another fairly useless feature that lets you use the shadow-world in order to make finding items easier but I rarely utilized it. These two features don't really add anything to the game, but their secondary nature means they don't take too much away from it either. 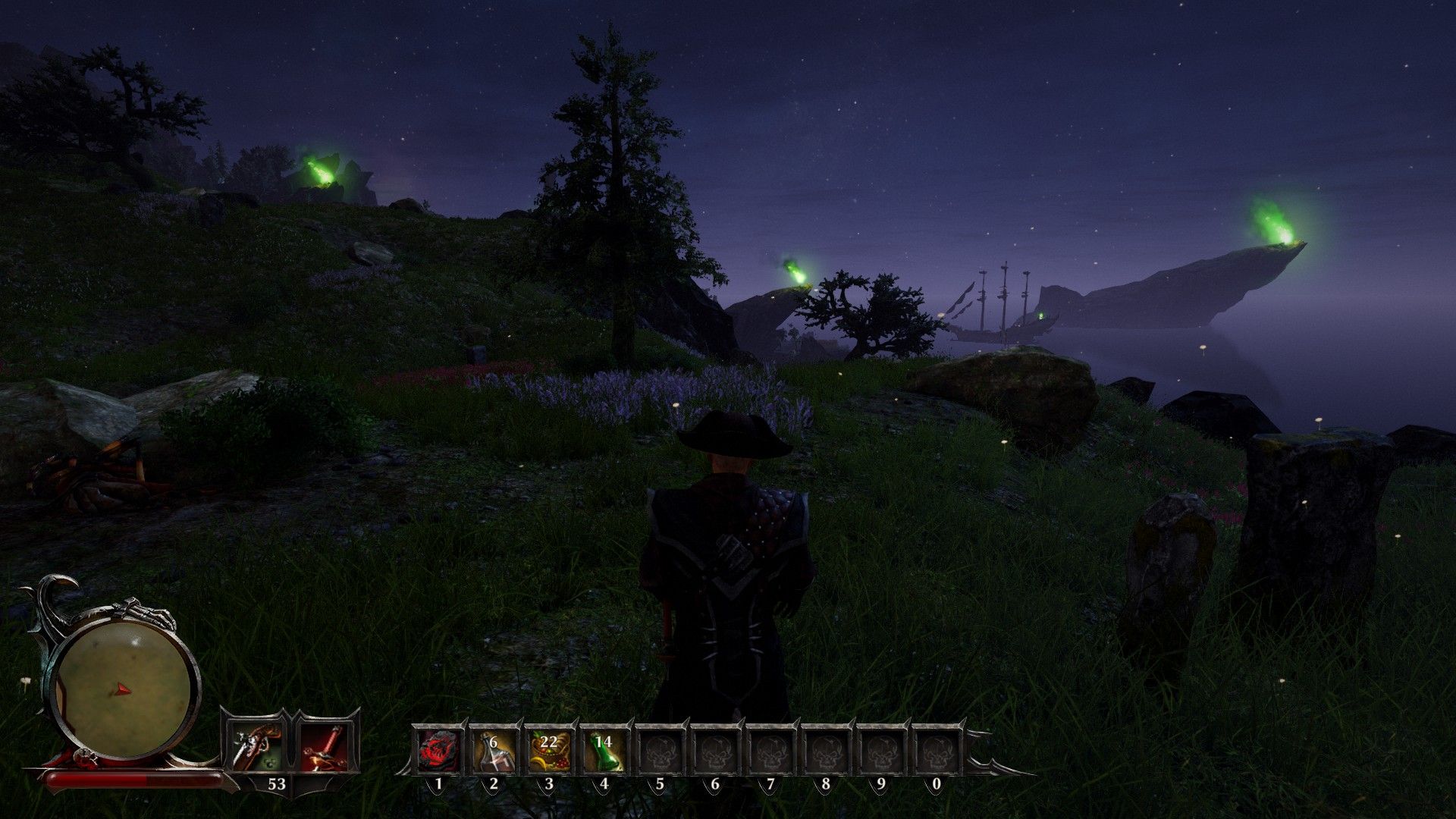 Different locations have a unique visual style and ambiance

Another luke-warm addition to the game are sea battles that seem to take two different forms. When you are sailing between islands, one of your crew members might inform you that an attack is imminent either from a sea monster or a ship. When fighting a sea-monster, you will sail your boat around in a small area and try to shoot it with cannons when it surfaces. These are slow, clumsy battles that add very little to the experience. Ship battles fare slightly better; there will be a cutscene showing two ships blasting each other with cannons, after which you will need to defend your ship against invading pirates or board the enemy ship. These still aren't great since any kind of scripted sequence feels clumsy in this game and you cannot save during either type of sea battle, although fortunately they are linked to your progress through the story and only happen a few times.

The Risen series has always suffered from a lack of polish, and while the third game is probably the least buggy of the three I still experienced some recurring issues. Your NPC companions sometimes block the camera during conversations so all you see is the back of their neck or their clothing. When in combat, you might get trapped between enemies and the terrain and dodging didn't always let me escape, making for some glitchy moments of doing summersaults in place. There was one instance of my companion getting stuck in the terrain, forcing me to reload an earlier save, but this seemed to be an isolated incident. There were occasional problems with the ragdoll physics that saw enemies go flying when I delivered the killing blow. Overall these problems were infrequent and minor, with everything working as intended the majority of the time. 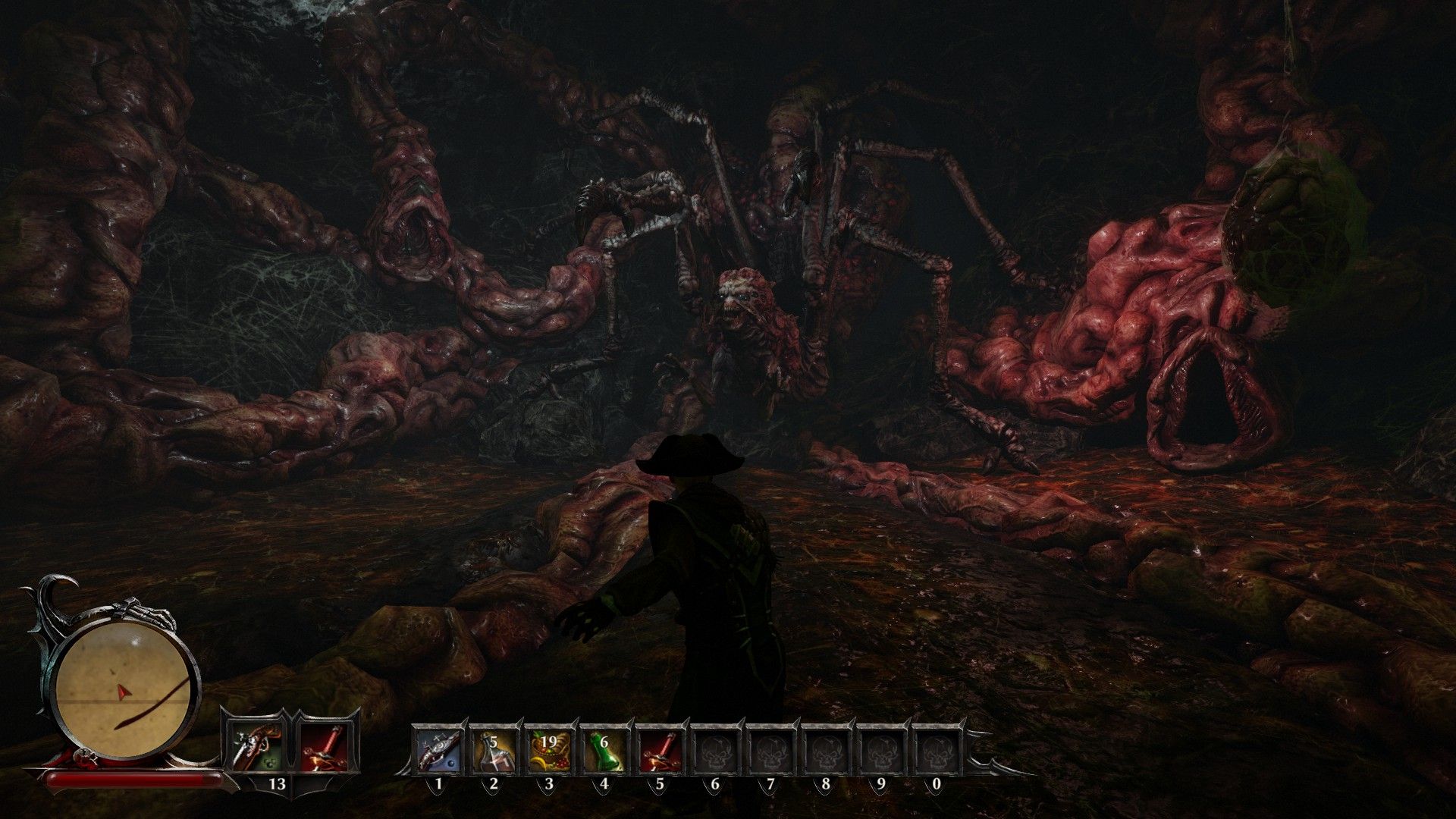 Bosses you face without your companion can be very challenging

Risen 3 seems to use the same game engine as the previous entry but it has seen significant improvements. Lighting and shadows are absolutely top notch and character models look much better than before, although I highly recommend turning off the ugly depth of field effect. Texture quality often leaves much to be desired but overall Risen 3 is a good looking game, and it ran fast and smooth maxed out on my mid-range PC. The islands all have their own look and feel from the rocky, gothic wasteland of Calador to the deep woods of Tiranis to the thick jungle of Kila. Several locations return from Risen 2, but they have been redesigned and feel totally fresh. Each environment is hand crafted and packed with detail, and I found myself constantly hammering the screenshot button as I explored new areas.

The sound in Risen 3 is rock solid across the board. The soundtrack changes between locations and is consistently good. Ambient sounds help develop a sense of place from the bubbling lava on Calador to the chirping of tropical birds on Antigua. As mentioned, voice acting is mostly good, apart from the tiresome Gnomes and the Natives on Kila who have stereotypical indigenous accents. Combat sounds are also good although somewhat lacking in impact.

As with its predecessor, Risen 3 offers excellent escapism, but now there is a pretty solid RPG in place to back it up. The pirate theme is still there, but it isn't as dominant as in Risen 2 (unless of course you join the Pirate faction). With a stronger story and less fetch-quests, Risen 3 might have found itself shoulder to shoulder with genre greats like The Witcher and Dragon Age Origins. As it stands now however, it is a great RPG with a very generic main story and a few underdeveloped mechanics and ideas. If you have ever been curious about trying a Piranha Bytes game but have been worried about a steep learning curve or a lack of polish, Risen 3 is your best bet.

Prev12
Our ratings for Risen 3: Titan Lords on PC out of 100 (Ratings FAQ)
Presentation
80
Varied environments and fantastic lighting help Risen 3 look great despite some blurry textures and stiff animations. Music, sound and voice acting are all strong.
Gameplay
75
Combat is more fluid and varied than in previous games, exploration remains supremely enjoyable as are conversations with the many interesting characters. Naval encounters are however a miss.
Single Player
84
Long and engrossing albeit with a weak story, a single playthrough might take 30-50 hours and the multiple factions means you will probably want to go through it a couple of times.
Multiplayer
NR
None
Performance
(Show PC Specs)
CPU: Intel i5-2500k @ 3.3ghz
GPU: EVGA GTX 670 FTW 2GB
RAM: 8GB DDR3
OS: Windows 7 Ultimate 64 bit

80
Despite some minor bugs the game runs great and I never experienced any crashes or significant technical snafus.
Overall
81
The biggest and most refined entry in the series, Risen 3 offers up a large helping of quality RPG content that will keep you playing even in the face of an underwhelming main storyline and a couple half-baked mechanics.