The thing about the indie development sphere – indeed, possibly the greatest thing about the indie development sphere – is that the pressure to create mass appeal is only as intense as you want it to be. People can make games for whatever niche audience they like – as long as they don't mind not profiting, I mean – and as somebody who finds himself frequently sitting among such audiences, I am immensely grateful for this. Indie games don't have to follow trends – although, as Steam Greenlight has made painfully evident, many still blindly do – and can be created for a time, place, and set of attitudes that have long since passed, or have yet to exist. Does anybody really still give a damn about I Wanna Be The Guy? I don't think so, but there always seem to be a few masochistic faux-retro platformers hanging around in the background, so I suppose it must still be a thing. 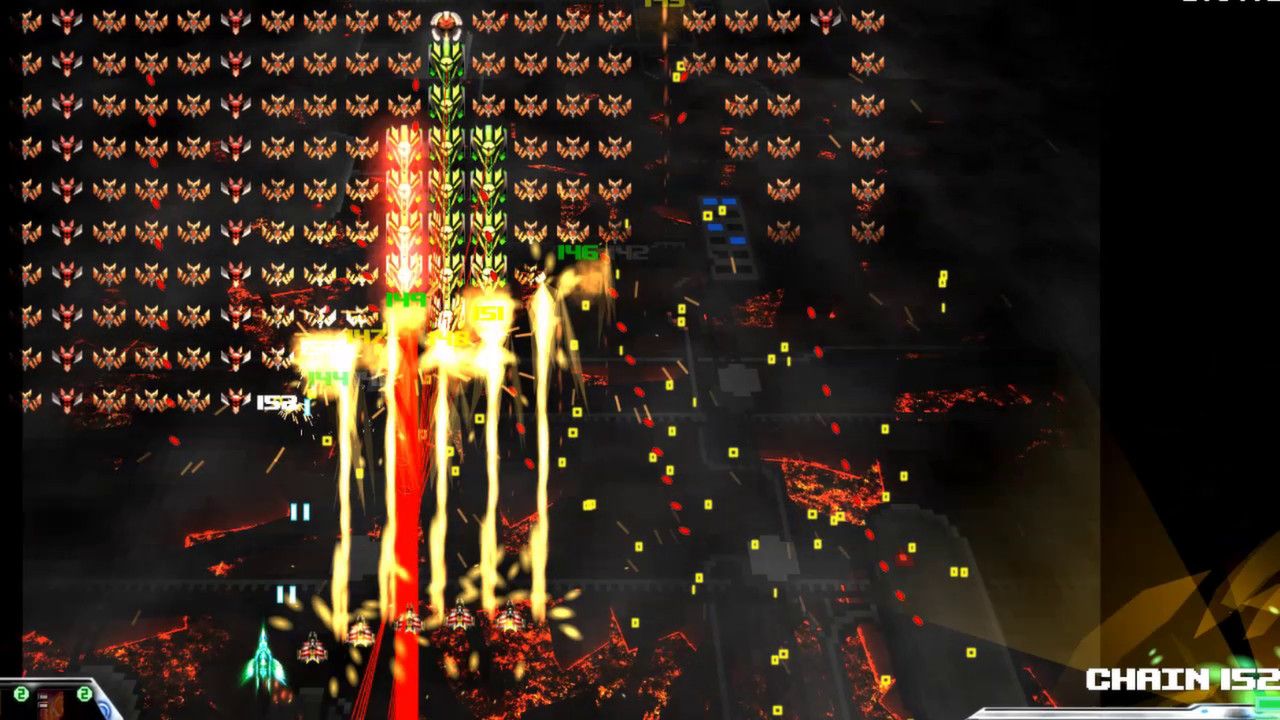 Hangeki is a prime example of that: a game that's been made for a very specific person. It's a game for the people whose fondest childhood memories are of playing a slightly dodgy Galaga clone for hours at the local pizza takeaway; for the people who have a half-finished custom cabinet lying on its side in their garage; for the people who dream occasionally of visiting Japan and taking a gander at one of their multi-storey arcades. People who aren't me, in other words. Before I had even launched Hangeki, I had already begun to pity it, knowing full well that it was never going to receive hospitality from any but the hardcore arcade enthusiast. The days when it would have dazzled people at a pizza takeaway, ravenously consuming their small denominations of money, are long gone. Nowadays they just pull out their sleek futuristic phone-computers and play a few rounds of some wretched free-to-play mobile game. Then, because history loves its sick jokes, they pour small denominations of money into it anyway. I hate the future.

Hangeki agrees. You can't get much more old-school than an arcade shoot-em-up, after all. Enemies fly in impossibly tight formation on the top half of the screen, you fly around on the bottom, and bullets are exchanged until one side is obliterated. So far, so steady. Your actual gun fires automatically – which I'm grateful for, honestly, because I didn't fancy the idea of holding down one button for about twenty minutes at a time – but you have up to four special weapons that consume your power meter, a big multicoloured bar that charges as you pick up shiny coins from dead foes. Your prerequisite screen-clearing bomb is actually worked into the game universe as the titular Hangeki, a really hazily-defined super-weapon that gets charged by killing enemies. Meters, weapons, aliens, spaceships. I can't say I was expecting Hangeki to waltz in with an industrial leaf-blower slung over its shoulder and blast the shoot-em-up cobwebs away, but to its credit it plays around with the basic elements enough to draw you in. 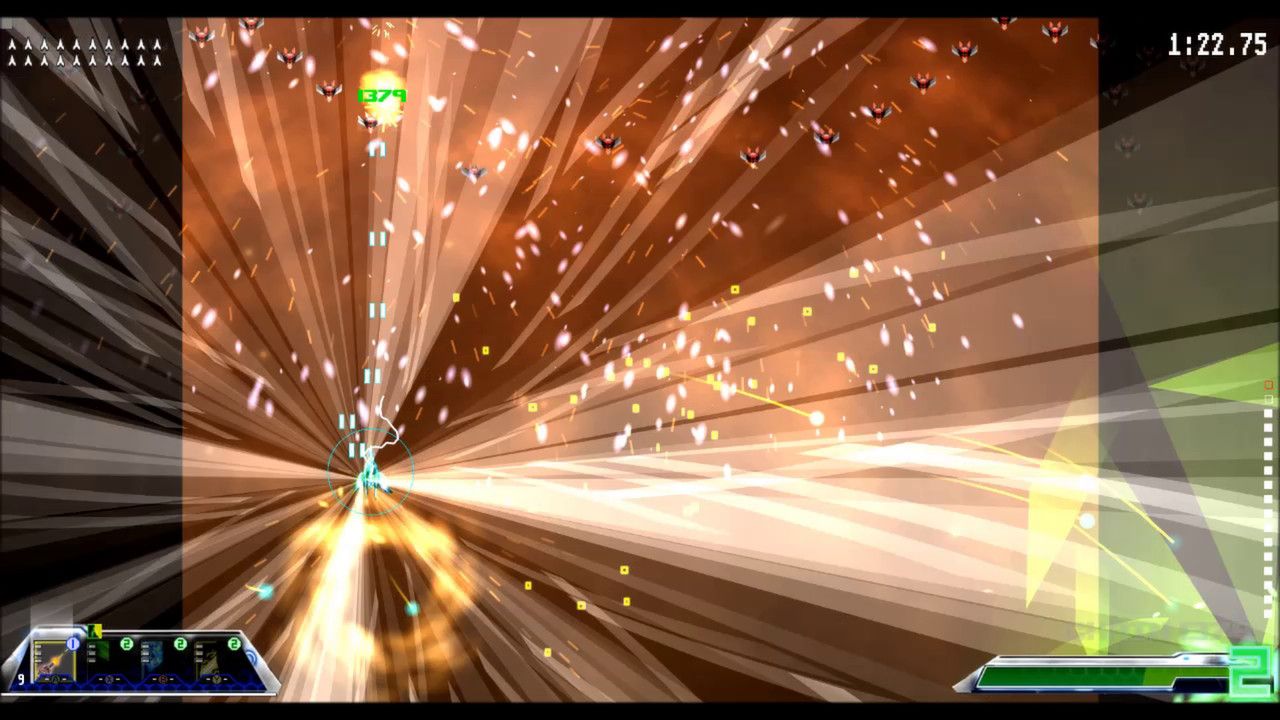 Well, for about an hour, at least. At that point I had to stop, on the account of my eyes having shrivelled up into the approximate size, shape and colouration of a pair of dried prunes. I know Japanese-style action games have had a bit of a reputation for extravagant visual effects in the past, but honestly, did nobody involved in Hangeki ever look at it and go “I think we should tone this down a bit”? Even typical effects like your bullets are unnecessarily flashy, but with every level-up, special weapon or Hangeki activation the game starts packing in so many screen-covering starbursts and flying particles that your monitor might as well have gone supernova. Come on guys, this is as close to bullet-hell as it's possible to get without actually being bullet-hell. Where do you get off making it so difficult to see what's actually going on? And if you're going to include options to turn down such effects, make sure that the slider actually goes between 'Crowded nightclub full of malfunctioning strobe lights' and 'Retirement home at four o' clock in the morning'. I rattled that slider back and forth, and even on the lowest setting it still felt like the game was embedding fish-hooks in my brain via the optic nerve. The delicious irony is that despite all of this, the game itself is actually downright ugly. At least ninety percent of enemy attacks consist of lines and circles ripped straight out of Microsoft Paint – although, somewhat mercifully, this at least makes them easy to distinguish from their environment – the ship designs are muddy forgettable blobs, and most of the backgrounds are featureless scrolling textures (with a cloudy overlay, if the game is feeling really fancy). Music? Well, it exists. That's pretty much the only thing worth mentioning about it.

There's something very strange going on with the actual action in Hangeki. It has all the right components, no doubt about that, but some of them seem to have been inserted upside-down. Rather than feeding you a constant stream of enemies, Hangeki dumps waves of them on you in a manner not entirely unlike Space Invaders. Destroying enough of them will charge the Hangeki itself and allow you to clear the remainder of the wave, so it's less of a last-resort panic button and more of a bizarre execution ability that essentially lets you get away with only actually directly killing half of the enemies in any given wave. I think it's supposed to be a means of keeping the adrenaline flowing, ensuring that you're always fighting a large number of foes and avoiding the traditional problem of wave-based enemies where you tediously go back and forth, eliminating the last few stragglers with all the urgency of a cleaner scrubbing a particularly stubborn stain. It's a nice idea, but it unfortunately spawns more problems than it solves. 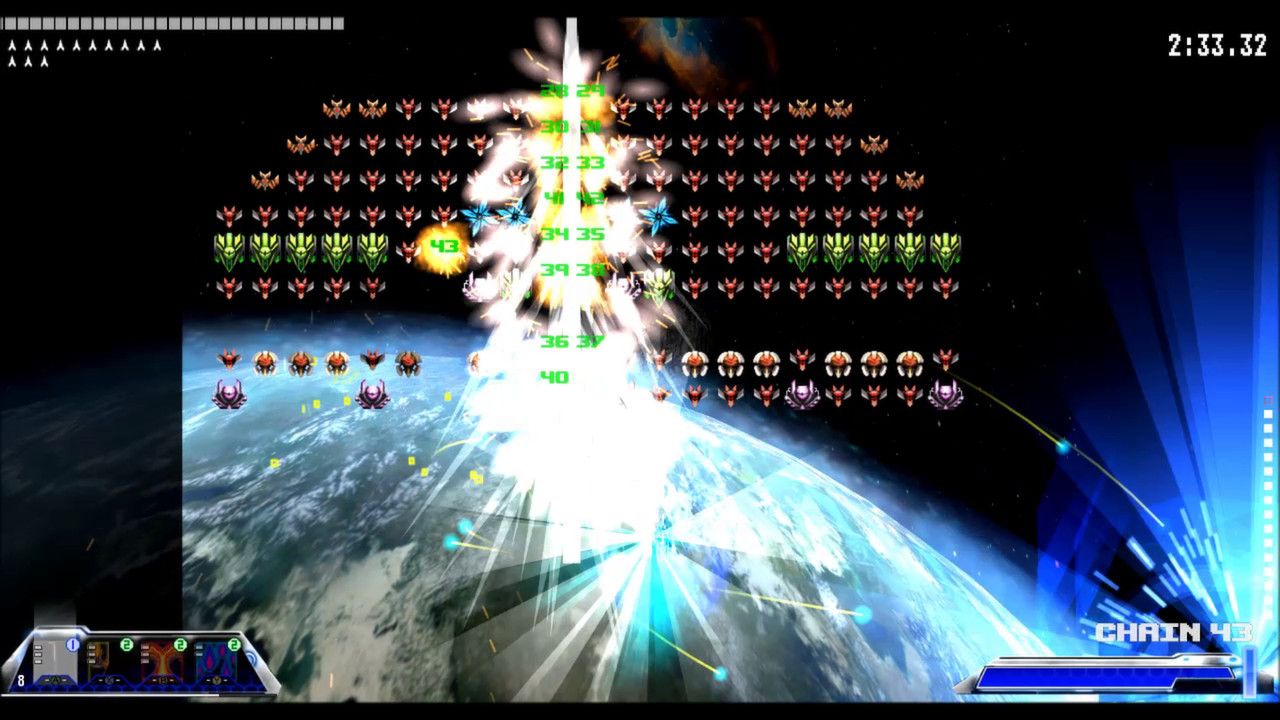 You see, using the Hangeki isn't just encouraged: it's all-but forced upon you. Whenever it's charged, more blasted effects crowd the screen and 'HANGEKI READY' appears in the middle in big blazing letters, a distraction that could only be exacerbated with the addition of a klaxon, or possibly a very small nuclear war. Every aspect of the game is geared towards smashing the big red button – alright, in the case of my spacebar that's the off-white button – the moment your Hangeki is charged, but since you won't get nearly as many coins from enemies killed in such a fashion it often becomes beneficial to leave it until later in order to better charge your power meter. This leads to a recurring situation of head-clutching stupidity where you're trying to fight off the last few enemies even while the game shoves a sodding great big sign in your face. It's a three-way fight between your patience, your ability to survive while dealing with an incredibly obtrusive obstruction, and how desperately you want a high power level for the next wave. Whichever one wins, you're left disappointed. 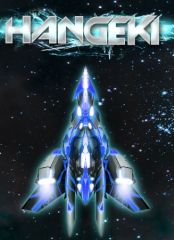