A decent noir-themed stealth puzzler, but its heritage as an iOS game results in some problematic controls

Mobile gaming is on the rise as smart phones and tablets are getting powerful enough to render games that are reasonably detailed and complex. There isn’t a huge amount of overlap between titles present on more traditional gaming systems like consoles and PC’s, but there have been some games that exist in both worlds. While it seems more common for console or PC games to be ported over to phones, there is the odd mobile game that makes the opposite trip, moving from phones and tablets to PC’s and consoles. Third Eye Crime is one of these rare cases, and the game’s heritage as an iOS title means that everything is designed for use with a touch screen. While I’m sure Third Eye Crime made for a pretty good mobile game, the controls don’t fit the mouse and keyboard as well as they would a touch screen, and this alone makes it difficult to recommend.

Even though Third Eye Crime is described as a stealth-puzzle game, it’s really about running away from people in the most tactical way possible. Relatively few of the game’s many brief levels can be completed without being detected at all. Instead, you spend most of your time trying to outsmart your enemies by letting them see you and subsequently leading them on an elaborate chase around the level that allows you to collect any items and escape. Most of the time, you cannot avoid getting spotted, but the chases are interesting and force you to think on your feet. Most levels take less than a minute to complete and end when you go through the exit. 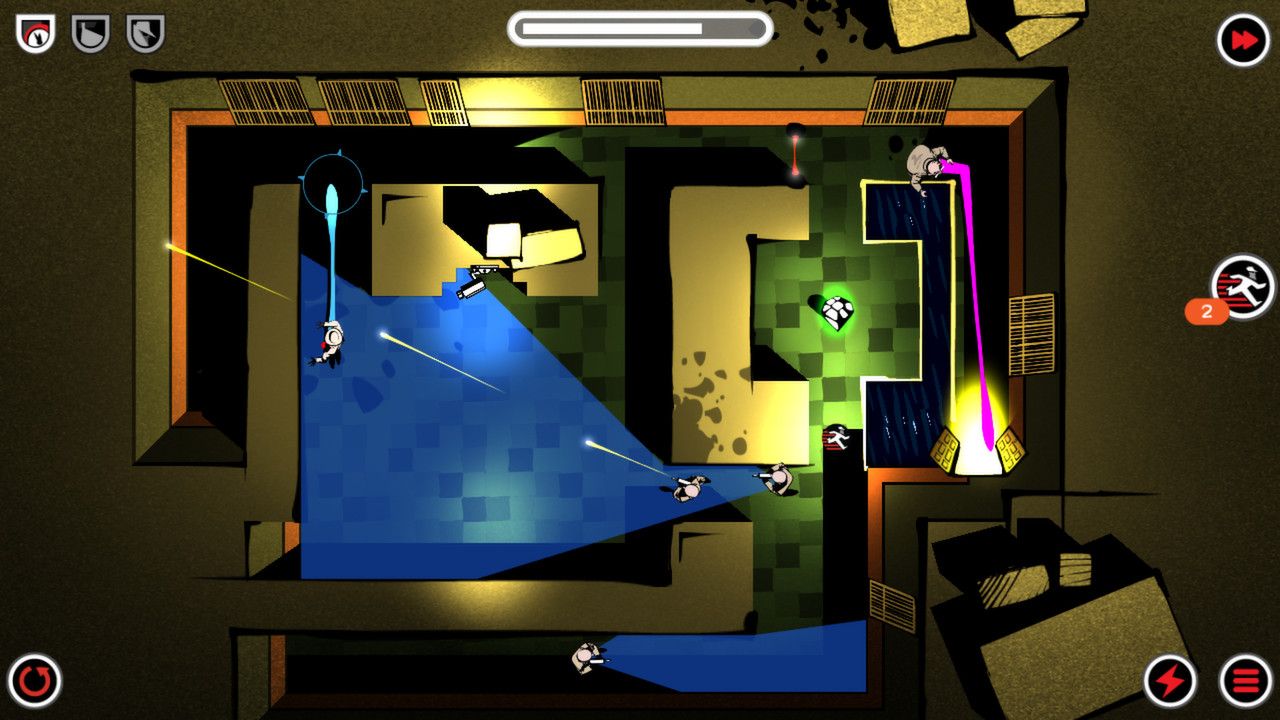 Often levels start with you crossing through the cone of vision of a guard, camera or other detection device, which causes any guards in the level to move to your last known location. Once the guards lose sight of you, the ground turns red as a means of indicating the search pattern of your pursuers. If the ground is a bright red, the guards will check there next. If it is a pale red, you have a bit of time to hide and plan your next move. Most levels hinge around this search-pattern mechanic, and levels are generally designed with lots of hallways, rooms and passages to give you the opportunity to baffle your pursuers.

Early on, you only have to deal with basic goons who move slowly and can be evaded as long as you don’t corner yourself. As you progress through the game’s ten chapters, new enemy types appear at a steady pace, such as “scattershots” who are guards armed with sub-machine guns and “hustlers” who can move much faster than the standard goons and catch up to you. New types of environmental hazards also start to appear, mostly in the form of new detection devices like security cameras and lasers which will trigger an alarm if you pass through them.

While in order to complete each level you only need to make it through the exit or occasionally complete an objective like stealing something or helping someone escape, there are always three bonus objectives you can try and complete. These range from getting through levels in a set amount of time to picking up all of the gems which are scattered around most levels. If you complete all of the bonus objectives you get a “perfect” rating for that level. If you get the perfect rating enough times, you are rewarded with items which you can use to make life easier for yourself. These consumable items also frequently appear as pickups, but cannot be carried between levels. They are things like noise-makers which attract enemies, temporary speed boosts and holograms which can be used to draw enemies away from yourself. Like the enemies, new items are introduced at a steady pace, making for a great learning curve building up to some very challenging levels. 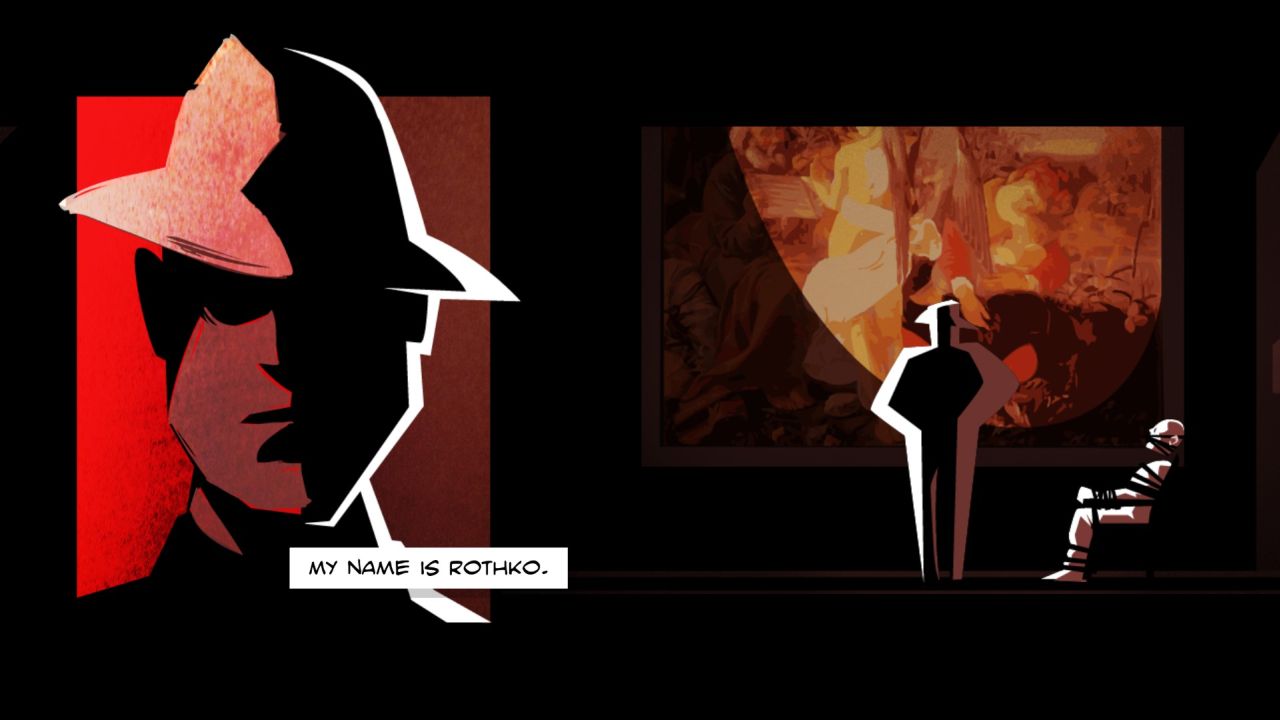 Rather than control your character directly by clicking, you create a path for him to follow by dragging your mouse. This is a slightly cumbersome way of moving around during chases and was clearly designed with a touch-screen in mind. Early on the path-making system is not a problem, but once things become more frantic and/or you need to control multiple characters at once, the controls become unwieldy. Often in chases you will need to use items at a specific time and doing this while also moving on a set course is challenging when using a mouse. If you click in the wrong place, you will alter your path and probably ruin your chances of success. When you control multiple characters, either when using holograms or helping someone escape, you must click on the alternate character and drag with the mouse to create a path for them. If you mis-click, once again your first character will move in an unintended direction.

The controls become increasingly problematic as you progress through the game and you must use different items in conjunction in order to succeed. This issue is offset somewhat by the ability to skip levels that you get stuck on. Each chapter has around fifteen levels, but you are only required to complete ten or twelve of them in order to progress to the next chapter. This is a great idea since it lets you move on if you get stuck on one level, allowing you to return to it later with fresh eyes and momentum. 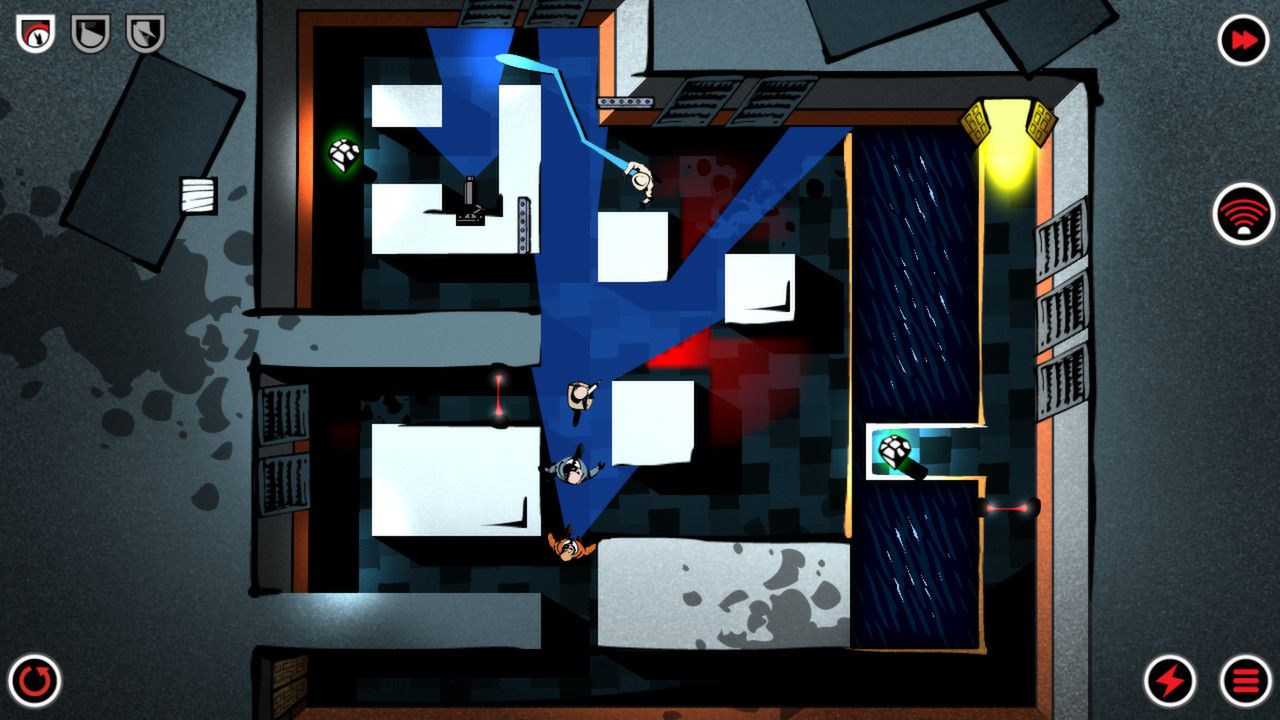 The entire game is presented in a consistent Noir style, and the theme is very well executed. Before each chapter a snappy animated comic panel moves the story forward, which involves a mysterious woman and her employer suddenly giving you a series of dangerous jobs like stealing special items or rescuing a captured informant. The visuals are heavily stylized with your character sleuthing about in a trench coat and hat in rhythm to excellent jazzy music that changes based on what you are doing and whether or not you have been discovered. My only gripe with the presentation is that the different locations you visit during the chapters such as hotels and art galleries don’t look very different from each other outside of slightly altered colour palettes.

For five dollars Third Eye Crime offers up dozens of well designed stealth puzzles in a slick Noir wrapper. It is a shame that the controls which probably worked so well on touch screen devices don’t translate terribly well to the mouse and keyboard as you progress into the game. If you are willing to unlearn the usual click-to-move control scheme used by most isometric games in favour of some finger gymnastics for using items and controlling multiple characters, Third Eye Crime will surely prove to be worth the modest asking price, but ultimately these problems make it difficult to recommend on PC.

Our ratings for Third Eye Crime on PC out of 100 (Ratings FAQ)
Presentation
80
A slick noir art style with great jazzy music is only let down by a lack of visual variety between locations.
Gameplay
60
The levels require clever thinking to complete and chases are exciting, but the controls are problematic when you need to use multiple items or control multiple characters.
Single Player
70
Loads of levels spanning ten chapters that are strung together with a generic but well presented Noir story.
Multiplayer
NR
None
Performance
(Show PC Specs)
CPU: Intel i5-2500k @ 3.3ghz
GPU: EVGA GTX 670 FTW 2GB
RAM: 8GB DDR3
OS: Windows 7 Ultimate 64 bit

75
The game runs without issues apart from the unwieldy controls.
Overall
68
If you are willing to deal with some problematic controls in the more complicated levels, Third Eye Crime offers up a slick collection of levels for a modest price. 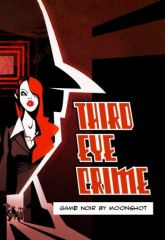 Our Review of Third Eye Crime
68%
Adequate
The Verdict:
"A decent noir-themed stealth puzzler, but its heritage as an iOS game results in some problematic controls"
Game Ranking
Third Eye Crime is ranked #1262 out of 1815 total reviewed games. It is ranked #101 out of 152 games reviewed in 2014.
1261. Tesla Effect
PC
1262. Third Eye Crime