With the explosion (dare we say ‘bubble’?) of indie gaming titles coming out in the past decade, sometimes it’s surprising that we don’t see a wider variety of art styles represented. Yes, of course we have games with a minimalist style, retro 8-bit, cel-shaded, retro 8-bit, and even retro 8-bit, but every now and then I become particularly hoity-toity and wish for even more. Why not a game with the Pacific Northwestern Native American style of art? Or some of the Zulu african stylings? Well, this particular itch was scratched to some degree with the arrival of Abyss Odyssey, an action-fighting game whose chief strength I’m going to jump right into addressing first: its Art Nouveau style.

Abyss Odyssey presents its aesthetic purely and unapologetically. The setting is vaguely Mediterranean, with dashes of South American imagery thrown in here and there. It’s a fantasy world, but one that’s a child of the Renaissance, rather than the Medieval Tolkien-fest that we’ve grown so used to. No elves or dwarves, but demons and monks abound. No wizards, but plenty of sprites and lesser gods. It’s a world of altars and archers, not Dungeons and Dragons. It’s a style that’s a real pleasure to take in, if anything just for the variety’s sake, but every now and then the garishly bright backgrounds make it difficult to distinguish your character. The soundscape can end up being a bit unbalanced, especially as different environment noises crowd each other out, but the musical pieces have a wide variety of stirring adventurous overtures that merge nicely with the visuals. 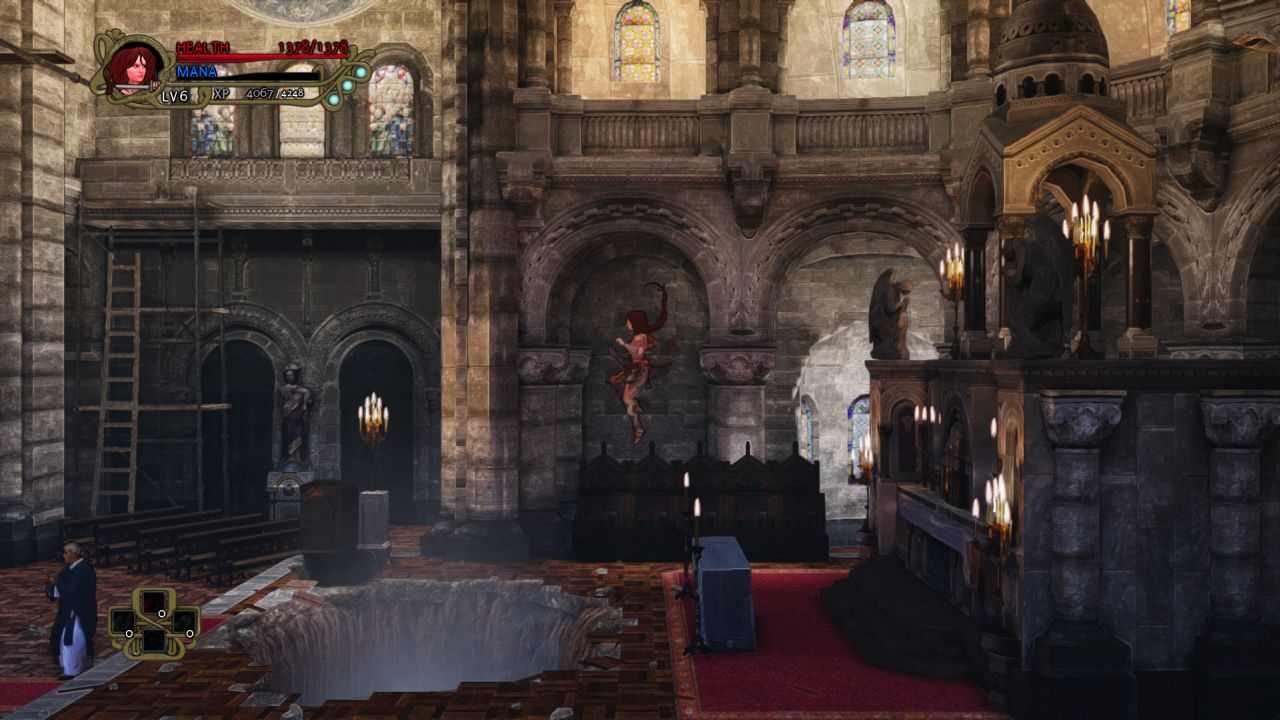 Although billed as a multiplayer fighter game, Abyss Odyssey focuses around a roguelike almost-but-not-quite-platformer campaign. The goal with each run is to get as far down into the titular abyss as possible, with experience, unlocks, and collected money carrying over from life to life. In an unusual move reminiscent of Rogue Legacy, Abyss Odyssey actually supports the respawning mechanic with the story itself: you play as a dream, a character constantly recreated within the mind of a sleeping warlock, who waits at the bottom of the abyss for you to finally arrive and kill him (or wake him up, as the case may be). All the enemies you fight are the projections of the warlock’s subconscious, Inception-style, but the fact that you, the hero, are also a projection gives the story a nice sprinkling of depth: after all, if some subconscious part of the warlock’s mind wants to destroy himself, he can’t be judged too harshly…. or can he?

Story aside, the gameplay in Abyss Odyssey knows its strengths and plays to them. The randomly-generated levels keep the platforming to its simplest, nothing more than a few spikes to jump over. This makes traversal very bland, but is altogether a smart move by the developers because the combat-focused controls make for poor platforming potential. Essentially, levels are only there to provide one or two staged fights, when the sides of the screen will lock temporarily, and two or three enemies will gang up on you for a few minutes. Learn your moves well, and you can easily take advantage of their long pauses to swipe at them. Button-mash, and you can get caught in a sling of attacks as your enemies stab at you simultaneously from all sides. Every gamer hates lag, but it’s particularly unforgivable in melee fighting games, and it’s a harsh strike against Abyss Odyssey that you’ll almost certainly need to fiddle with your graphics settings in order to make your attacks feel smooth. Even then, you might find yourself being more frustratingly focused on turning around to face your opponent than timing your blocks correctly. 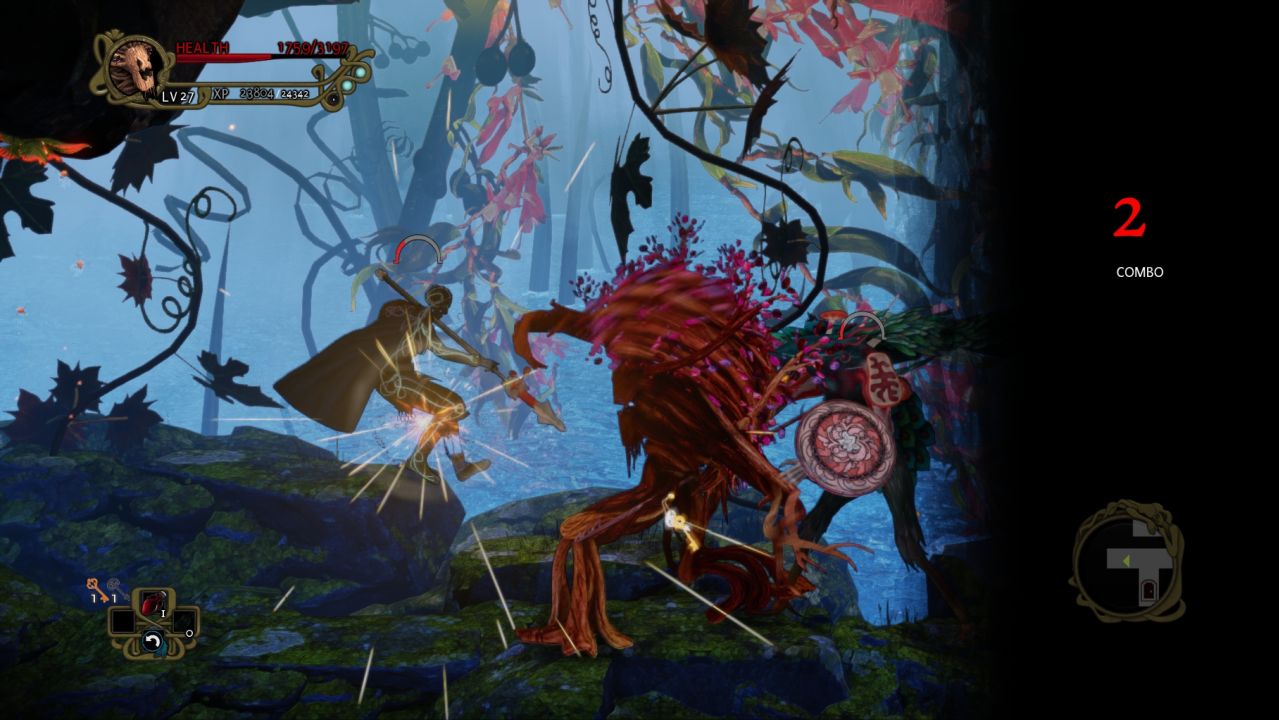 You have all your basic fighting standards: quick attacks, dodge attacks, shields, and parry abilities. Each main character has three slots available for special attacks (which build up your mana bar towards a super attack), and each special attack can be upgraded individually. The aforementioned super attack is sadly identical for every playable character, but does have an interesting single-player application: it captures the soul of an enemy defeated by it. Capturing an enemy minion’s soul and playing a short challenge as that minion unlocks the character for multiplayer matches, which nicely leaves the character unlocking in the hands of the player. But don’t get too excited: these only unlock the support characters, the ‘seconds’ who will take your place after your main fighter character dies Your hero characters are only unlocked as you play through the main campaign, and you’ll start with a single hero to get you on your merry way. This feels particularly frustrating: it’s bad enough when fighting games keep most of their playable character behind closed doors for the multiplayer, but when nearly every character is locked out when you first crack the game open, it’s an automatic shutdown to the idea of simply breaking the multiplayer in with a bunch of friends.

All this brings us to the multiplayer ‘free for all’ multiplayer matches of Abyss Odyssey. Right out of the gate, players might raise an eye at the fact that only local 4-player multiplayer matches are available from the game at launch, which might put a damper on your social gaming hopes. There’s a lovely variety of imaginative and unusually styled characters to pick from, like a cornucopia of exotic fruits. Tired of fighting games manned entirely by rippling-muscled thugs and thinly-clad cartoon characters? In Abyss Odyssey, you can be a monk, a centaur, a faerie, or even a brazen bull. Each character comes with unique attacks, and it’s easy to pick out favorite combinations to play with. There are two slight downsides to the multiplayer. First off, it’s focused on four-player matches, while the combat design feels more aimed at one-on-one dueling. Secondly, there aren’t enough stages to keep the fights interesting over the long run. It will be fun for the first few games as your try to figure out how to use your bull’s heatray eyes to bear down on your friend’s fencing masquerade doll, but there doesn’t feel like enough depth to sustain a full hour of fun with friends. 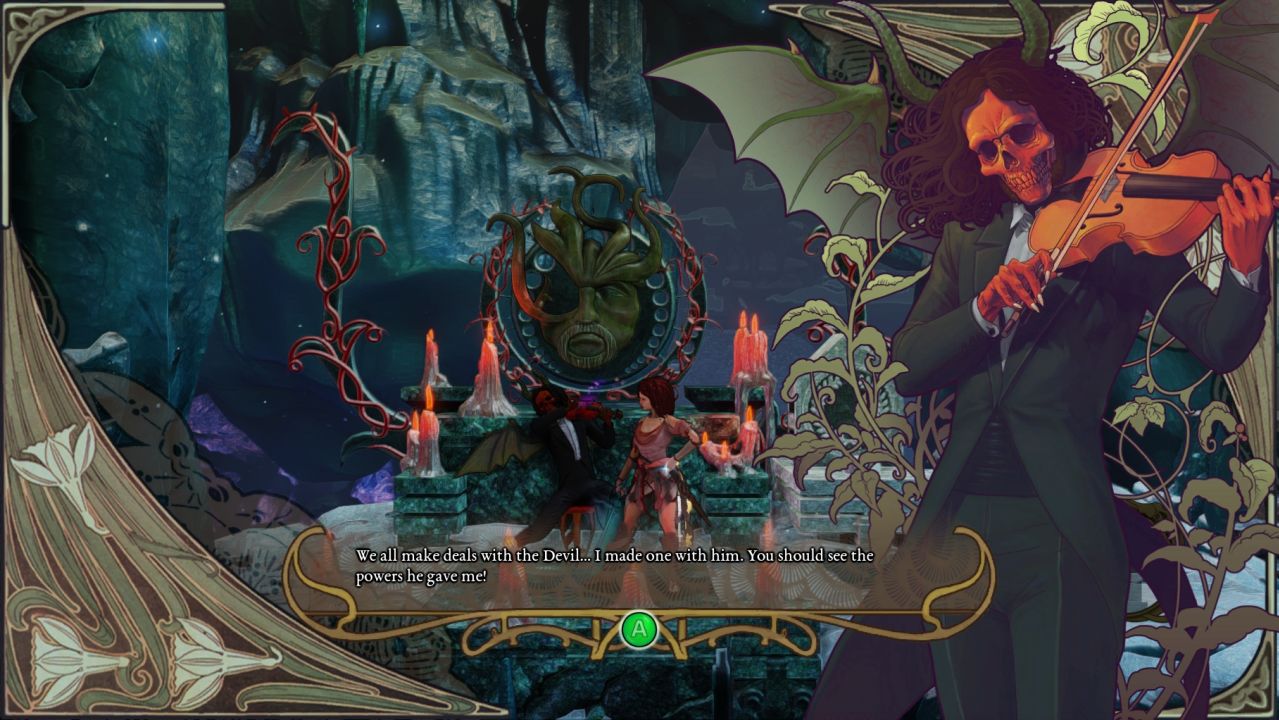 With such a wide variety of art styles and fighting characters, it’s surprising to discover that Abyss Odyssey still has a feeling of being ever so slightly unfinished. Gameplay instructions only explain combos in terms of Xbox controls, even while you’re playing on PC. Somebody must have started the PC porting work, because some of the menus display keyboard navigation controls. Half of the game manual’s special attacks and abilities aren’t explained clearly, and they’re never given clear usage moments in gameplay. For all of our complaints about long tutorials in games, this is a title that definitely could’ve benefited from even more in-game teaching to swell out the learning curve.

Abyss Odyssey is a very pretty painting, but as with many other art forms these days, it’s a little difficult to tell who its audience is. It’s not accessible enough to be a party game, but at the same time it doesn’t feel deep and focused enough to be a satisfying roguelike. It’s definitely worth the time to check out, if anything just for the unique visuals, and at such a low price, it’s probably worth the money as well. After all, there are so few sources of getting one’s swashbuckle on these days.

Our ratings for Abyss Odyssey on PC out of 100 (Ratings FAQ)
Presentation
82
The age-of-exploration setting and traces of Art Nouveau make the game stand out from today’s lineup of fighters and roguelikes.
Gameplay
73
Once you learn the tricks, the combat can be satisfying, but many fundamentals of gameplay are confusing, or never adequately explained.
Single Player
77
Mixing roguelike with fighter brings some fresh ideas to the genre. The story will keep your interest enough to make you keep coming back for more.
Multiplayer
71
Individual fighter characters perform well, but the game can’t seem to decide whether to be a party brawler or a dueling title.
Performance
80
You’ll probably need to tweak the settings heavily in order to get the game to run without harsh lag.
Overall
73
The best parts about Abyss Odyssey are those in which it is utterly unique: a Mediterranean fantasy setting, a brightly pastel art style, and a fun mix of roguelike randomization with fighter-game mechanics. That said, none of these points make the game engaging enough to have your friends come back for more in-house fun. 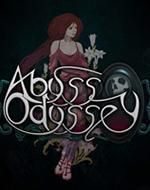 Our Review of Abyss Odyssey
73%
Good
The Verdict:
"Combines roguelike gameplay with melee combat and a fresh visual style"
Game Ranking
Abyss Odyssey is ranked #934 out of 1788 total reviewed games. It is ranked #75 out of 152 games reviewed in 2014.
933. Battleborn
PlayStation 4
934. Abyss Odyssey

All videos for Abyss Odyssey (1)
Advertisement ▼