SO MANY ME
Platform: PC
71
SummaryNewsArticlesVideoScreens

So Many Me Review

A colorful puzzle-platformer with punishing difficulty

There's a strange dichotomy to So Many Me. Initially, you're pulled into a game vibrant with color, pleasant to the ears, and engaging to play. The plot is as basic as they come. The cute, cheesy dialogue pushes things forward while introducing new systems and mechanics to the game. It's easy to think that So Many Me is an approachable and simple puzzle-platformer that's surprisingly aesthetically appealing. Then a couple hours in certain levels and bosses become so difficult, you'll be ready to take a sledgehammer to your computer.

So Many Me tells the story of Filo, a tiny little talking blob that coincidentally finds himself on an epic adventure to save the world. To do this, he'll have to master himself, literally. By eating seeds, Filo will split off clones of himself that each have their own specific personality traits. While none of these clones are particularly interesting by themselves, the interactions of the characters keep things light and whimsical, matching the tone set by the rest of the game. 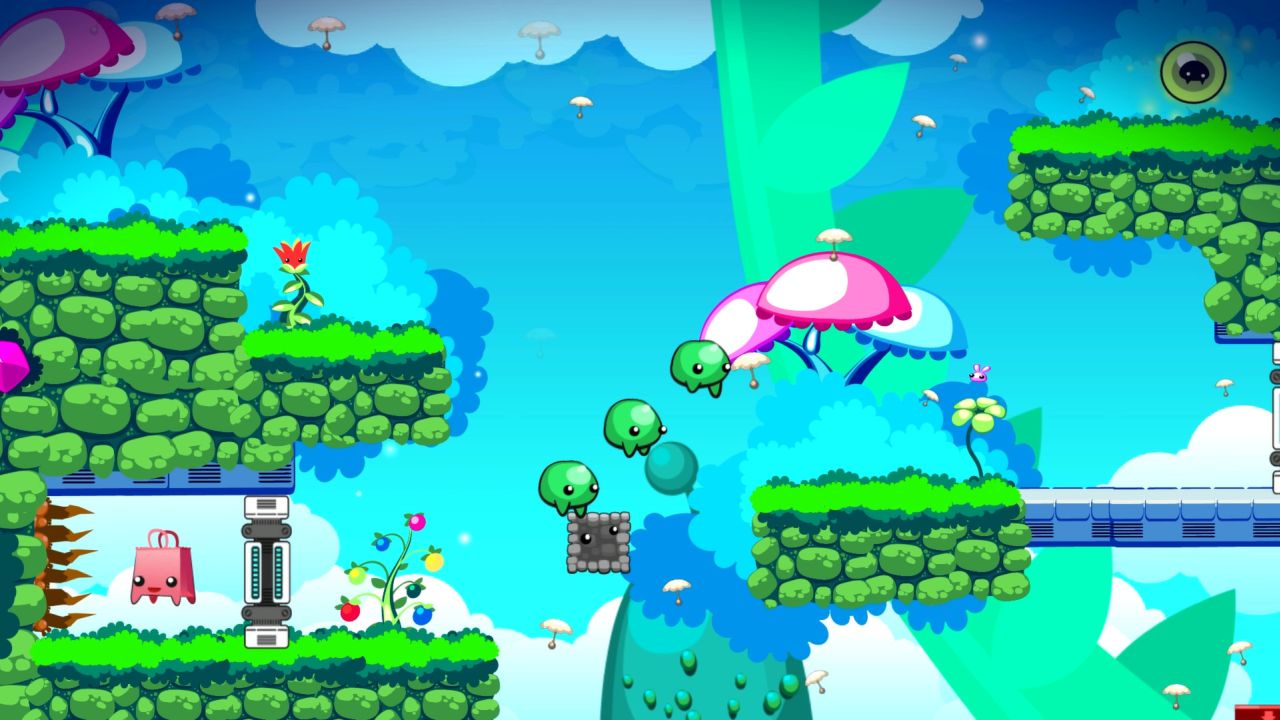 By using these clones in a multitude of ways, you'll be challenged to complete level after level throughout 5 different worlds. See a ledge you can't quite reach or a gap you can't cross? Simply transform your clone into a floating block and Filo will be able to reach the unreachable. At the beginning of the game, you'll face simple platforming puzzles like these, but things quickly get more complicated and that's where a lot of So Many Me's blemishes really begin to show.

The more “Me”s you collect, the more times you can use them to create these blocks to get where you need to go. Once you hit the puzzles that require multiple blocks placed in a specific order, I found the game’s mechanics to be a bit frustrating. If you misplace a “Me”, you can always call the last one back and redo it, but if you’re planning out the solution to a puzzle that requires 5 “Me”s, you’ll have to scrap the entire layout if one guy wasn’t placed appropriately. It comes down to precision, and I’m okay with that if only the game controlled a little better. 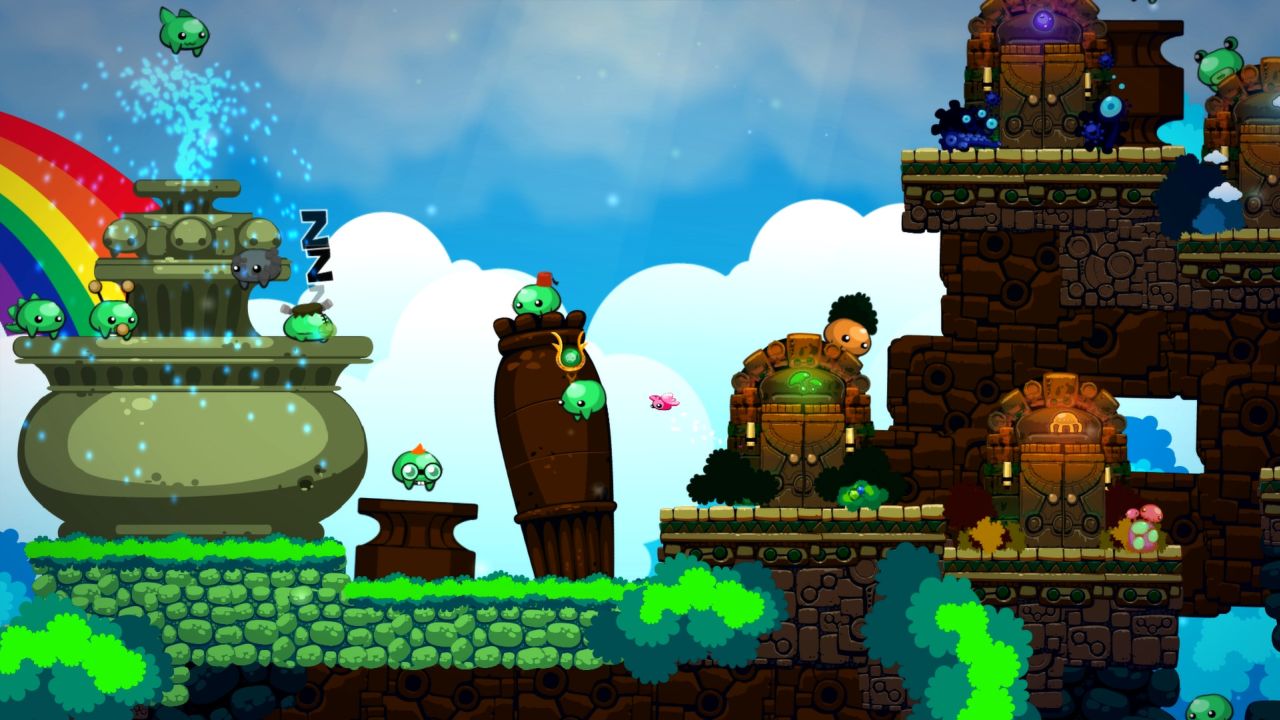 Jumping around the worlds of So Many Me is enjoyable until you get to a puzzle that requires precise jumping and block placement. This is really where the game sort of falls apart for me. When you create a block, it creates a sort of magnetic field for your character to latch onto. Once you’re on the block you can completely walk around the entire thing. On top of being disorienting, you never quite know where your “Me” will land on the block once you create it. Sometimes he’ll latch right on top, other times he’ll be off to the side, sometimes you won’t even land on the block. Even at the end of the game, I was never quite sure where I’d be on the block. It seems like a little thing, and for a majority of the game it won’t matter, but there are sections where ray guns or other obstacles can kill you in one hit. When you know what you have to do but the game keeps placing you in harm's way, seemingly at random, things can get pretty frustrating.

Luckily these points of frustration are broken up by an engaging variety of puzzles and power-ups that change up how you play. Sure, you’ll be placing blocks a lot to unlock switches and whatnot but each world opens up new abilities for Filo to use. One allows you to create a bouncing “Me” that will boost your “Me”s to incredible heights. The higher you jump from equals how high you’ll be launched so sometimes you’ll have to plan out where or how to get high before creating a bouncing “Me”. You also will be able to create different kind of suits that change up the play of So Many Me. For instance, in specific locations you can create a walking tank machine that will transport the “Me” over spikes and even shoot rockets, turning the game into a quasi-side-scrolling shooter for a little bit. These little spices to the basic puzzle-platforming formula make So Many Me stand out in a genre that is beginning to get overcrowded in the indie scene. 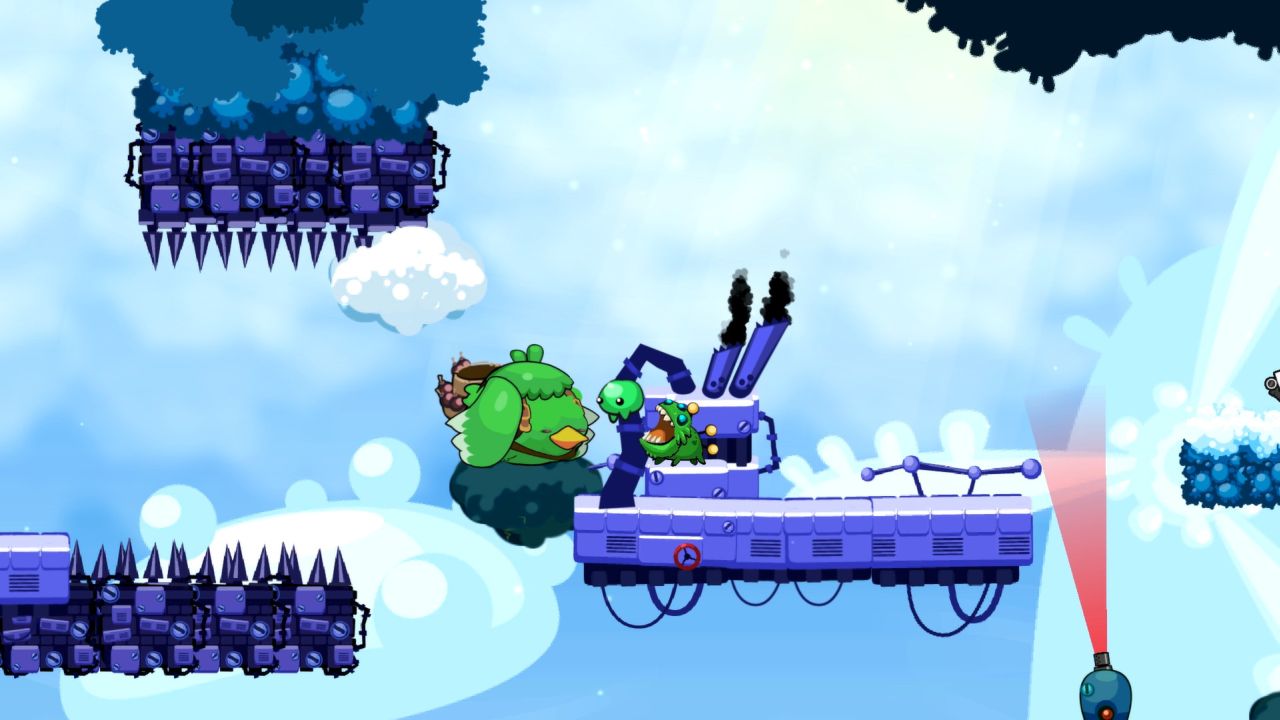 There are even boss battles in So Many Me. Sadly, they are probably the most frustrating part of the game. While I appreciate the variety Extend Studio put into the title, the bosses should have been left on the cutting room floor. They are just too frustrating and too difficult, nor fitting in well with the rest of the game. If Filo is ever hit, he’s dead. Now think about that combined with the frustrating precision of certain puzzles I mentioned earlier and you have one anger-inducing piece of So Many Me. The final boss needs to be hit 5 times while you’re dodging falling pieces of volcanic rock, and placing blocks in 4 different corners of the screen in order to disable the boss’ shield. One slip up and you have to repeat the whole battle over again. It brought me back to the 8-bit days, and not in a good way. Seriously, some of these battles made me long to play Ninja Gaiden or Ghosts N’ Gobins instead of trying again.

So Many Me wins with its looks, sound, and variety, but it fails in creating a really cohesive experience. It doesn’t quite nail the mechanics that you rely on throughout the game and that’s a big problem when things start to get tricky. It’s not hard to get frustrated with So Many Me, but it’s also hard to hate. Fans of puzzle-platformers will find a lot to enjoy here but only experienced players will have any chance of finishing it. If you’re someone who simply thought this game looked cute, you’ll be in for a world of hurt.

Our ratings for So Many Me on PC out of 100 (Ratings FAQ)
Presentation
85
So Many Me is a gorgeous looking game, vibrant with color and a fun soundtrack that just makes you want to smile while you play.
Gameplay
61
Ranging from easily accessible to frustratingly difficult, So Many Me is plagued by inconsistency. When you don’t need precise movements, it works great. When you do, things get extremely difficult and it’s not always the player’s fault.
Single Player
70
Filo’s adventure is expansive with a variety of mechanics to explore. The boss battles could have been left out and a couple levels aren’t made very well, which is disappointing. Bonus levels add some nice replay value.
Multiplayer
NR
None
Performance
90
Runs without issues
Overall
71
So Many Me is a cute, colorful game that will leave you smiling one minute, then gritting your teeth the next. It’s a nice addition to the puzzle-platformer genre but more polished mechanics would go a long way in making it less frustrating in certain areas. 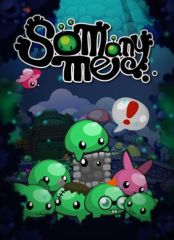