Having the freedom to experiment with new design ideas and experiences in video games is a concept that’s welcomed by all. At no point has that freedom been more relevant and available than with the current rejuvenation of the indie game scene. Over the past few years, we’ve seen new genres and creators rise in popularity and take their stand alongside the usual crop of triple-A releases. One such new genre is the so called walking simulator – a type of game where the players do little else but walk through environments. The most notable examples include Gone Home, Dear Esther, and The Stanley Parable. The latest entry in this divisive genre is 4PM, a self-proclaimed experiment to tell a serious narrative. That experiment ends in absolute failure.

By reading the game’s description, it is easy to assume that the game positions itself alongside the popular narrative experiences mentioned in the above paragraph. Developer Bojan Brbora says on the game’s info page that 4PM is not a typical, mechanics driven experience but rather a short, interactive story with gameplay elements. If you are interested in something a bit different, experimental, then this is it according to the creator. Well, turns out even if you are interested, 4PM still fails to deliver in all aspects.

Players assume the role of Caroline Wells, an apparent everyday normal young woman who happens to have a drinking problem. The game is structured as both a series of flashbacks and real time storytelling. You wake up in an apartment, and following the guidance of some poor UI elements, interact with a few objects. Listen to your answering machine, wash your face in the bathroom, and so forth. You’re late for work, so it’s time to catch a cab and rush to your boring corporate position while recalling memories of drinking excessively the night before.

After realizing that working is for suckers, you decide to sneak out, but meet a man in the staircase and follow him to the roof. It’s difficult to talk in further detail about 4PM’s plot because there just isn’t much of it - the game can be completed in less than 30 minutes and features a few very small environments. Even as far as walking simulators go, that’s a very short experience. There’s some hint of replay value because on occasion, players get a few choices that produce a few different outcomes. That pushes the overall runtime to maybe 45 minutes. But really, why would you want to go through this experience again? Stumbling around drunk in a club, looking for a bathroom to throw up in, is not exactly the pinnacle of gaming.

Caroline is a very unlikable character that comes across as the stereotypical brat from a teen movie, and has about as much charm and subtlety of a Ke$ha music video. Dialog is mostly poorly written and characters are few in number. Whatever serious emotional undertones the game attempts all appear and resolve themselves in the last ten minutes, in a shotgun blast of exposition dialog. There’s simply nothing here that’s executed with enough skill to cause any sort of emotional response from the player.

There is probably not much budget to work with, but 4PM presents itself particularly poorly. Stanley Parable and Gone Home were very competent looking games, and visuals in Dear Esther were a selling point, so the bar has been set at a good level. Unfortunately for 4PM, it doesn’t even come close. The voice acting is inconsistent at best and awful at worst. The game’s visuals are severely lacking, with low resolution textures and freaky character models and animations, something akin to the 3D games of the early 00’s. Caroline handles poorly – perhaps intentionally so, given her alcoholism, but it’s just an annoyance for the player. And worst of all, there are serious framerate problems.

4PM clearly takes itself rather seriously. Reading through the game’s description on the Steam store page might lead players to believe they are in for a real treat here. But it couldn’t be further from the truth. The game has absolutely no redeeming qualities, it’s poorly presented, poorly written and poorly executed. A $5 price might lure some unlucky souls in, but please, search the couch cushions for a few more dollars and get yourself one of the myriad of games at the $10 price point that are infinitely better.

45
It runs, albeit poorly with an unsteady framerate
Overall
25
4PM offers so little value in every aspect that it's impossible to recommend, even at the measly low price point 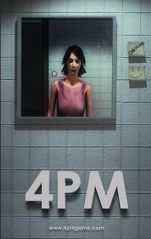