Soon to become a running joke

Ah, irony, what would we do without you? Well, we'd have far more straightforward interpretations of media, fewer grown men trying to justify their penchant for watching children's television cartoons and considerably less confusion over the actual definition of irony, that's what. On the other hand, without the warm safety of possessing an ironic standpoint, I'm not sure anybody could willingly bring themselves to buy, download and install Infinity Runner. Abolish irony, and Infinity Runner alone would make its reinvention necessary.

For the unaware and uninitiated, Infinity Runner is a game about werewolves in space. That's it. There's no self-awareness, no tongue-in-cheek attitude, no acknowledgement of the sheer B-movie ridiculousness of the concept; it is played as straight as straight can be, with a concerning childlike seriousness. You are a werewolf on an enormous interstellar spaceship – the titular Infinity – and since ethics are always the first thing to go down the drain when humanity finds itself millions of miles from the nearest Occupational Health and Safety office, you were captured and experimented on by the Terran Council, an enormous hazily defined authority which presumably – I'm just guessing, because it's the space future and it has a fancy spinning blue logo – has some kind of totalitarian grip over its subjects. The game starts with you breaking out of your cryogenic stasis tank to find the ship falling apart and a lady telling you over the telepathic telephone to start running. So you do, and become the titular Runner. See? Infinity Runner! If only other games were so bold as to describe their contents in the title, like... never mind, I should stop here before I start ripping off Zero Punctuation. 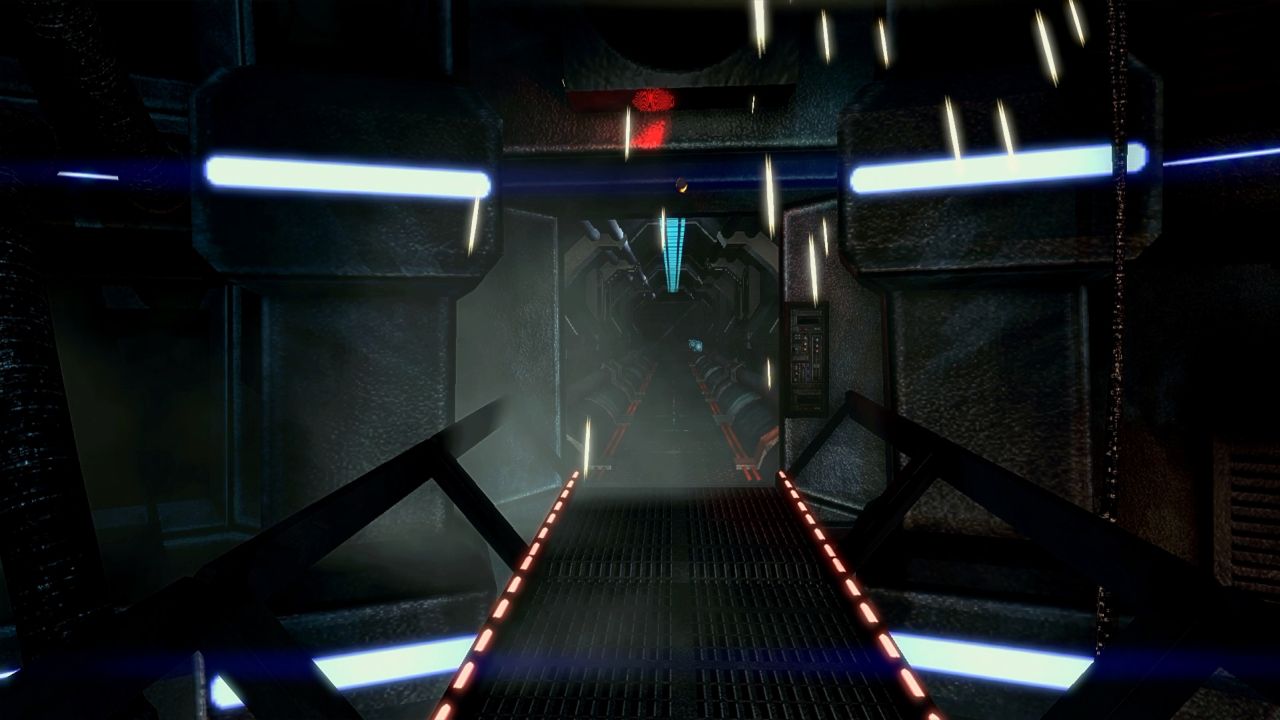 In another stroke of naming genius, Infinity Runner is, in fact, an infinite runner, meaning that you are inexorably propelled down a whole load of very straight identical corridors while a team of animators tries to contrive ways of making lethal obstacles jump into your path. It's the sort of game that works well on a mobile platform since it can be usually boiled down to three or four actions, but it's a little bit unusual to find such a game being packaged up all nice and shiny into a proper PC game. It's like finding a person unicycling down a main road during rush hour: probably legal, but the environment is hardly appropriate, and you're probably likely to get up a lot of people's noses. Still, surely there's room left in our hyper-threaded hearts and our thermal-paste addled minds for some polished, low-budget arcade action?

Let's do the run-down, or whatever it is people say. There are seven different environments throughout the campaign with two levels apiece, each with their own set of pre-fabricated hazards to swerve around, slide under, jump over, or some combination of the above. Since the ship is falling apart at the seams – courtesy of a captain who decided that piloting the galaxy's largest spaceship gave him cause to drive straight through an asteroid belt – there's certainly no shortage of obstacles, and to the game's credit some of them are quite imaginative. Alright, so you have your basic stuff – collapsed beams, arcs of electricity, pools of cartoonish green goo, jets of flame and carelessly placed luggage trunks – but there are also a fair number of set-pieces that you have to navigate as they unfold, like riding a zip-line across a cargo bay while security drones fly across your path, or – to pick the most absurd example – leaping out of the airlock into space, landing on a conveniently-placed piece of debris and throwing yourself back into another airlock. It's all very impressive the first time you do it – impressive in the sense that you somehow routinely survive being exposed to the vacuum of space while wearing no clothing, protective or otherwise – but like all overblown set-pieces, it can get pretty tiresome to see for the thirtieth time that day. 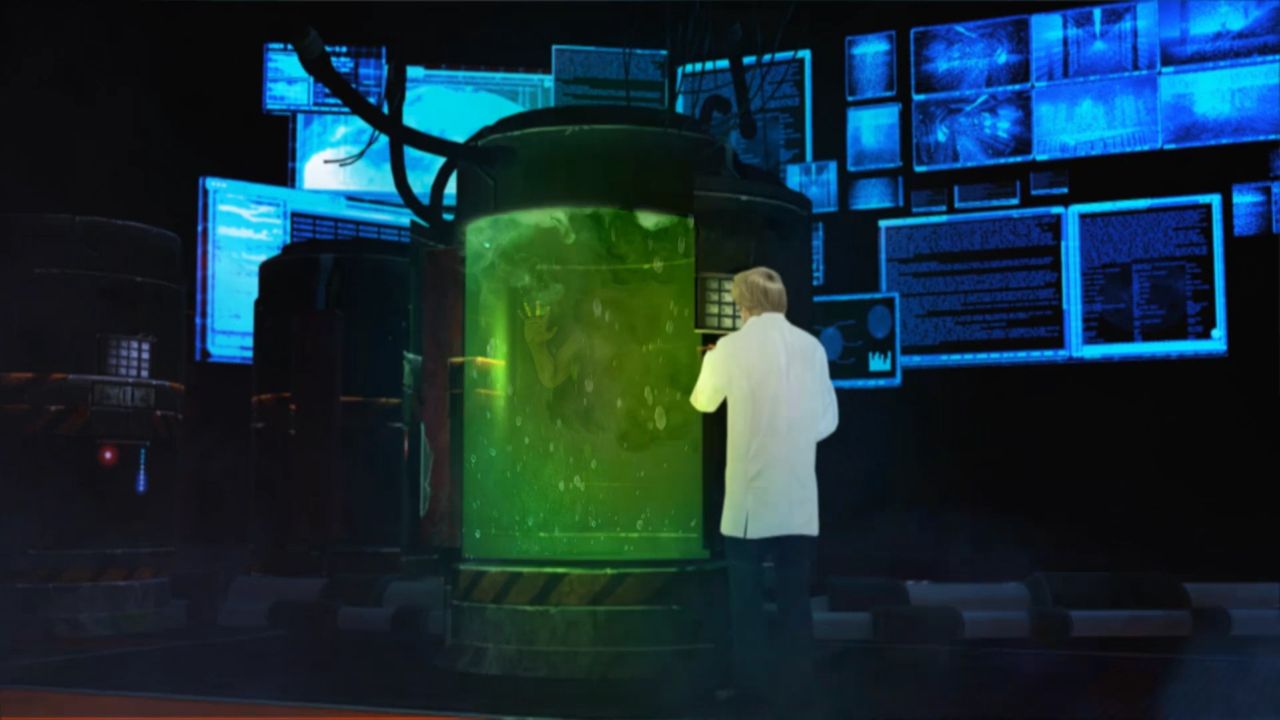 By the way, do you remember where I said that infinite runners work on mobile platforms because their control inputs are so few? Well, apparently Infinity Runner thinks they work just fine on PC too. Your range of actions is limited to jumping, sliding, turning corners, and strafing very slightly to the left and right. To be fair, the controls themselves are fairly tight and responsive – although thanks to the grid-like arrangement of the corridors, turning left and right never ceases to be disorienting – but they feel weirdly restrictive for a game designed for a keyboard and mouse that could easily have near-full freedom of movement. It's alright, Infinity Runner, people have played fast first-person games before. You don't have to lock us onto a rail to prevent us side-strafing into the wall or whatever. Might have to do something about the high-speed ninety-degree turns, though.

Oh, but what's this? Apparently the imminent destruction of the ship isn't enough to deter the Terran Council, so they've sent droves upon droves of (cough) 'fearless' soldiers to capture or kill you, for no better reason than to arbitrarily raise the stakes. And you know what these soldiers bring to the table? Combat? A new set-piece to evade? Nope, quick-time events. Blunder into a room, press a few buttons with an unbelievably generous time-limit, and you'll somehow manage to defeat these armed-to-the-teeth foes en-masse despite them being notorious across the cosmos for their brutality and you being a spindly man in your birthday suit. Even if we ignore that, and the fact that this is to combat what a pile of biscuit crumbs is to a full square meal, it breaks flow and cuts into the game's precious sense of speed for absolutely no good reason. Go on, Infinity Runner, tell me why I can't just dash around these clueless lumps like every other obstacle presented to me thus far. Better still, tell me why this has to exist at all. Really, it would be entirely in your favour to ensure that I slow down as little as possible; for one, I wouldn't be able to see your mid-2000s texture quality. 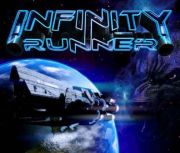