A fun puzzle-platformer that belongs on a Nintendo console

If you have a Wii U, chances are you’ve played a nice assortment of Nintendo-made gems such as Super Mario 3D World, Donkey Kong Tropical Freeze, Mario Kart 8, and maybe even Nintendo Land. You’re probably looking forward to the crazy cross-over, Hyrule Warriors, or Bayonetta 2, or possibly Splatoon. But for those of us that live in the present (most of us do), we’re probably looking at our Wii Us wondering what we could play on it right now. Looking at the eShop, Nintendo still doesn’t pack quite the indie-punch as Sony or Steam, but if you dig a little, you’ll find a very pleasant title by the name of Armillo.

Bringing me back to the fun and colorful days of Nintendo 64, Armillo is an overhead 3D puzzle/platformer about an armadillo trying to save his brother, his planet, and his little ghost-sprite friends from evil robots from outer-space. Sound familiar? It should. It’s a fine setup for a game that’s all about you progressing from level to level, facing more difficult challenges as you progress. Armillo isn’t groundbreaking. It feels familiar without being stale and, for the most part, does a good job at creating new experiences for the player within each level. 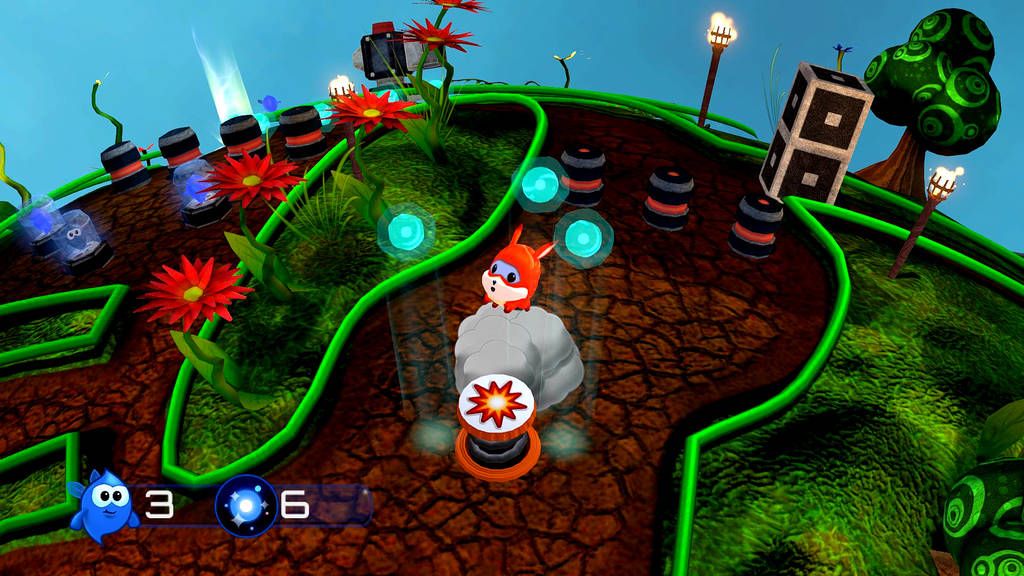 Playing Armillo is something like mixing Sonic 3D Blast, Super Monkey Ball, with a little Super Mario Galaxy flavor. Every level is a new planet and Armillo will roll around the entirety of these planets in about 5-10 minute sessions. The levels may be blocked off in very particular paths to lead the player in the right direction, but they eventually open up and branch out. Your challenges vary from defeating enemies, to unlocking switches, to using your armadillo powers in ways that will push you toward the goal. You’ll even face off against a few bosses throughout your journey.

Ultimately, that’s what I really enjoyed about Armillo. Every world is a new solar system with a unique theme behind it, and each level within that solar system offered a unique experience. Some levels will focus on platforming, like the space station levels filled with disappearing and hovering floors, while others will offer a more exploratory puzzle, like the level where you switch weather conditions to open up new pathways. Each level overall is great, but there are certain sections that involve Armillo going to a “Dark World” where you only have about 30 seconds to find the exit. Some of these sections were fine, but others only forced me to rush and feel anxious. They just don’t match the tone and vibe the rest of the game. 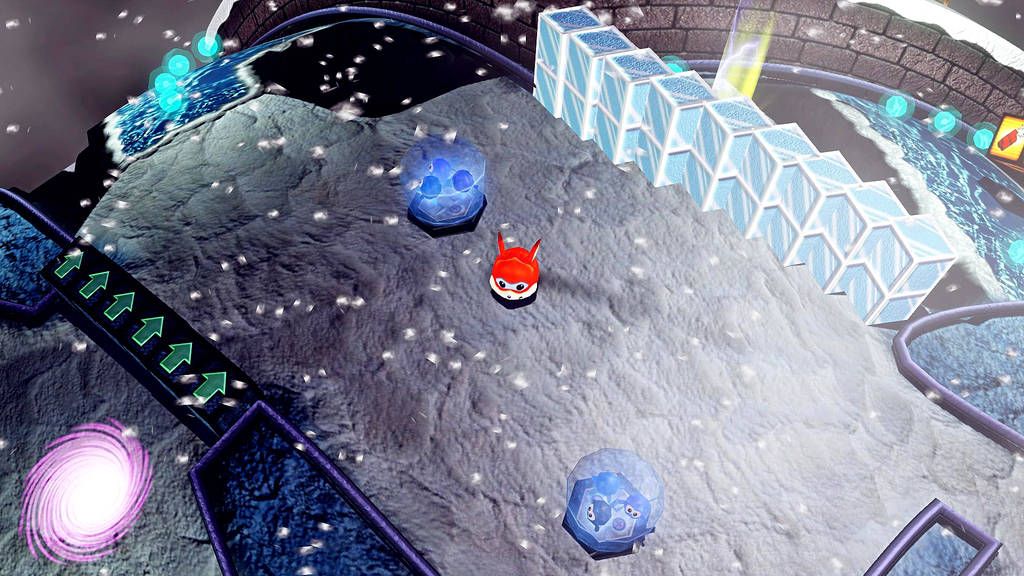 Progressing was always appealing because Armillo controls really well. The jumping is tight, the movement is slick, and the camera always follows appropriately. There were a few places where the framerate dipped, which is disappointing considering this game isn’t pushing the power of the Wii U, but overall the game ran well. The amount of actions you get are limited; most of the game you’ll just be charging and jumping, but there are some power ups that you’ll have to use skillfully to get to the goal. While I liked these power-ups, they felt underused. Sometimes you’ll only use a power-up for one small section of a level and that’s it. I mean, when you gain the ability to grow into a gigantic armadillo, you want to wreak some havoc. Armillo never really lets you do that.

There’s also a ton of stuff to unlock in Armillo. Each level is filled with blue orbs to collect that can be used as payment to buy a whole mess of upgrades for your character. These can raise your health, lives, and even add extra time to certain sections. Eventually you can even unlock entire secret levels. One level in particular, features an awesome cameo from another fairly new indie game. For the completionists out there, you’ll find a lot to keep coming back to long after you watch the credits roll. 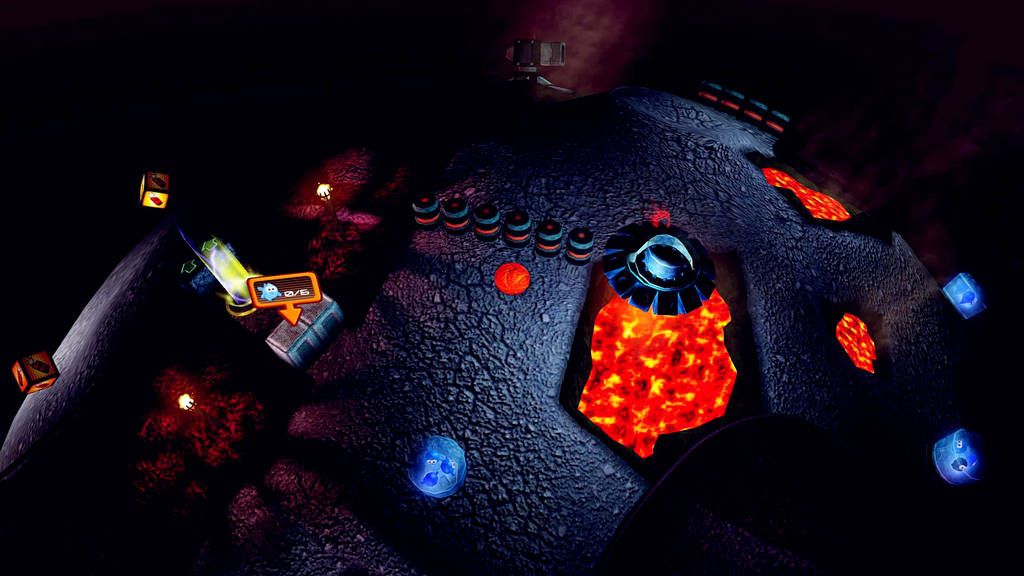 However, not all secrets are welcome. In order to unlock the last level of each Solar System, you’ll need to play at least a few bonus levels in the game. These bonus levels are 2D side-scrollers that completely change the physics of Armillo, incorporating a double jump that is quite possibly one of the worst double-jumps ever incorporated into a game. By jumping straight up, you’ll boost upward. By jumping to the side, you rocket off to the side by double jumping, but correcting you path mid-air is near impossible. Again, like the core game, these levels offer many different challenges and some are much more playable than others. For example, I had no trouble navigating growing and shrinking Armillo to the right size to beat the level, but I absolutely hated hitting jump pads to get to the top of another level. On the bright-side, the music in these bonus levels is pretty fantastic.

Armillo is one of those games that’s released at the perfect time for a Wii U owner. There’s not much out there, it’s inexpensive, and while it’s not going to win any end-of-the-year awards, it’s a really good title that you won’t find on the other platforms (at least for now). With its colorful worlds, and emphasis on mechanics and level design, it feels like it belongs here on a Nintendo platform standing next to games like Mario and Donkey Kong. It just needs a bit more polish to really shine.

Our ratings for Armillo on Wii U out of 100 (Ratings FAQ)
Presentation
73
An easy UI lets you navigate the solar systems easily. Every planet is designed in new and interesting ways. Text by Armillo needs to be read but the robots speak, which feels inconsistent.
Gameplay
75
The core levels are full of varied degrees of gameplay the content challenge the player in new ways. "Dark" sections aren’t nearly as fun as the rest of the level and 2D bonus stages could be greatly improved.
Single Player
80
Armillo offers tons of content, even after the credits roll. The main game will last a few hours but keeps players engaged by introducing new level designs and mechanics. Afterwards, completionists have unlockables to get, secret levels to play, and gold medals to obtain in each level.
Multiplayer
NR
None
Performance
71
A few spots have some noticeable frame-rate dips. Majority of the game ran consistently.
Overall
74
Armillo is a fun puzzle-platformer that has a lot going for it. Great level design, mechanics, and music are only bogged down by the poor physics in the bonus stages and certain "Dark" areas. 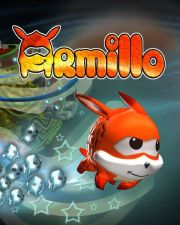