I’ve always been interested in the Great War, from studying the poets Owen and Sassoon, to reading Barker’s Regeneration and Faulks’ Birdsong, to visiting Ypres and the poppy fields in Belgium. But a century after the war, Valiant Hearts brought home the true horrors of World War 1 to me in a whole new way.

Valiant Hearts, the latest game to be made on Ubisoft’s gorgeous 2D UbiArt engine, is a sidescrolling adventure game with puzzles and items you can use to solve them, but it’s also so much more. It’s a history lesson, a time machine to a period so utterly devastating it’s hard to truly comprehend, all wrapped up in a an entertainment package accessible to modern audiences, and get this: it’s also incredibly fun and rewarding. 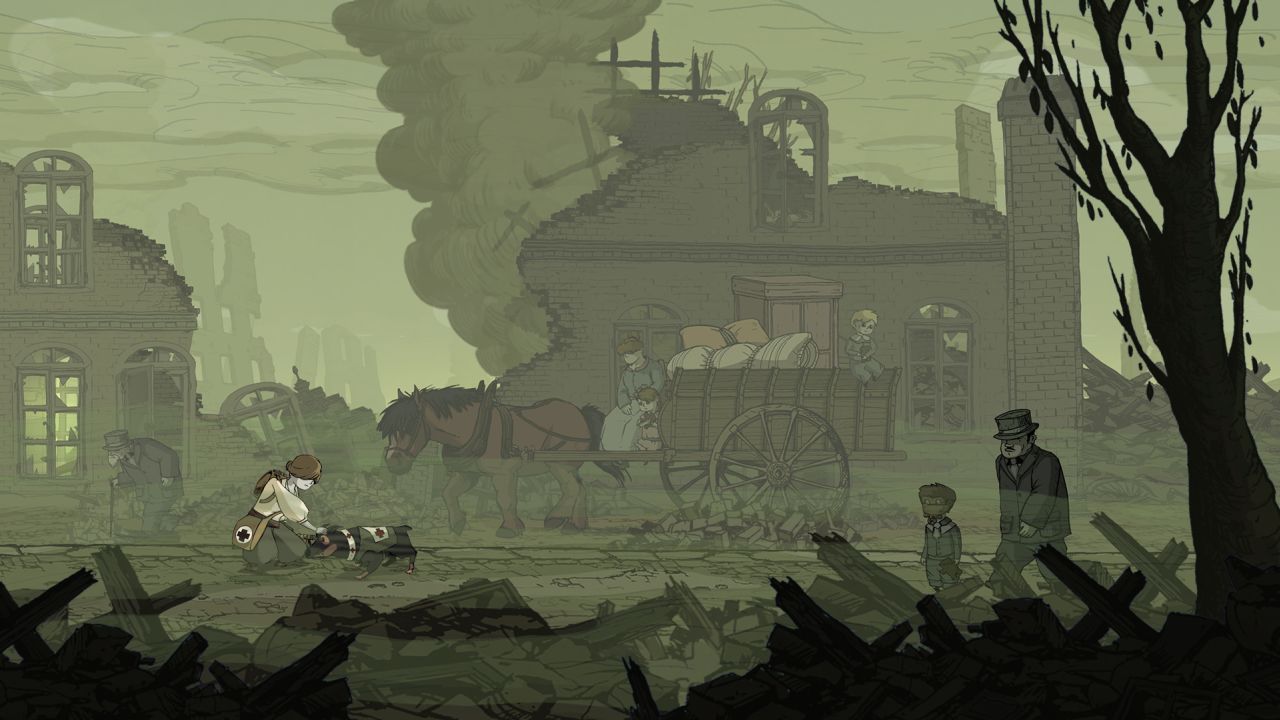 Valiant Hearts opens with Archduke Franz Ferdinand’s assassination – the fuse that lit the bomb – before honing in on the specifics of a French family, and witnessing the unfolding war from their point of view. Emile, a farmer, lives with his daughter Marie, her German husband, Karl, and their young son, Victor. Karl is conscripted into the German army, and although older, Emile soon finds himself in the opposing French forces.

Along the way Emile and Karl meet Freddie, a bombastic American with a tragic past, and the Belgian medic Anna. The game spans the entire course of the war as we play as these four characters in different situations, sometimes together, sometimes by themselves, but all four are likable and believable. I felt for all of them, and wanted to see each of them through the many terrors of trench warfare, POW camps, mines and warzones. As the game progressed, however, my hope for a happy ending continuously took a beating.

Moving through the game’s four lengthy chapters mainly consisted of light puzzle solving and collection. Getting a band to start playing music might distract some officers at a train station, or throwing a brick through a window might disperse the gas allowing you to continue. The puzzles got more involved as I went through, with Karl in a POW camp being a highlight (gameplay wise, of course). Here, I had to pass off several different items to different people in order to find what I needed in order to escape. It’s classic adventure game action, and rather than distance me from what was really going on, it further drew me in. 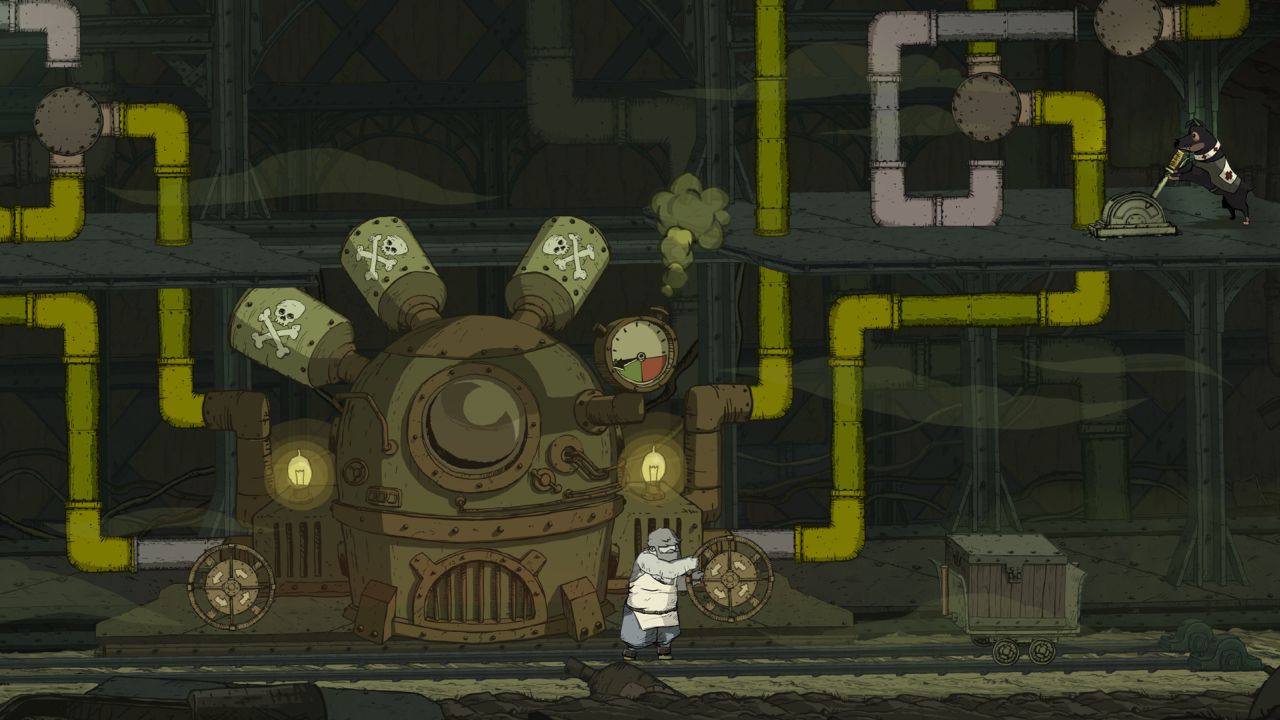 For instance, in the trenches with Emile, I had to avoid gunfire and shells, use dynamite and dig paths through the mud, just like a real soldier would have had to. Sure, some bits are played up for pacing and spectacle, but much of the minute-by-minute grind felt real, and often horrific. The aforementioned collection could have felt gimmicky to pad out the experience, but when I found soldiers’ wristwatches, photos of loved ones or letters, along with their detailed descriptions, it brought it home all the more. Every new location or event also brought real historical photos and facts to be read that helped to anchor and sell the reality behind the cartoony visuals.

And as with all games made with UbiArt, the hand drawn aesthetic is often stunning, particularly in the etched, illustration style often used for interiors and cutscenes. However, I sometimes felt the character movement looked a little like Flash animation, and close-ups showed jaggy, low quality images, which was a shame. These did not mar the experience, though, and on the whole the game looks like a moving picture book, a lens all the more horrifying when combined with its drastically different subject matter.

The only other presentation irk for me was the rather overzealous narration. A little too on the nose at times, a little too spelt out, with heavy-handed delivery. Again, nothing too irritating, but something to note. The score, however, was touching and sometimes moving, a constant undercurrent to the poignant story beats. 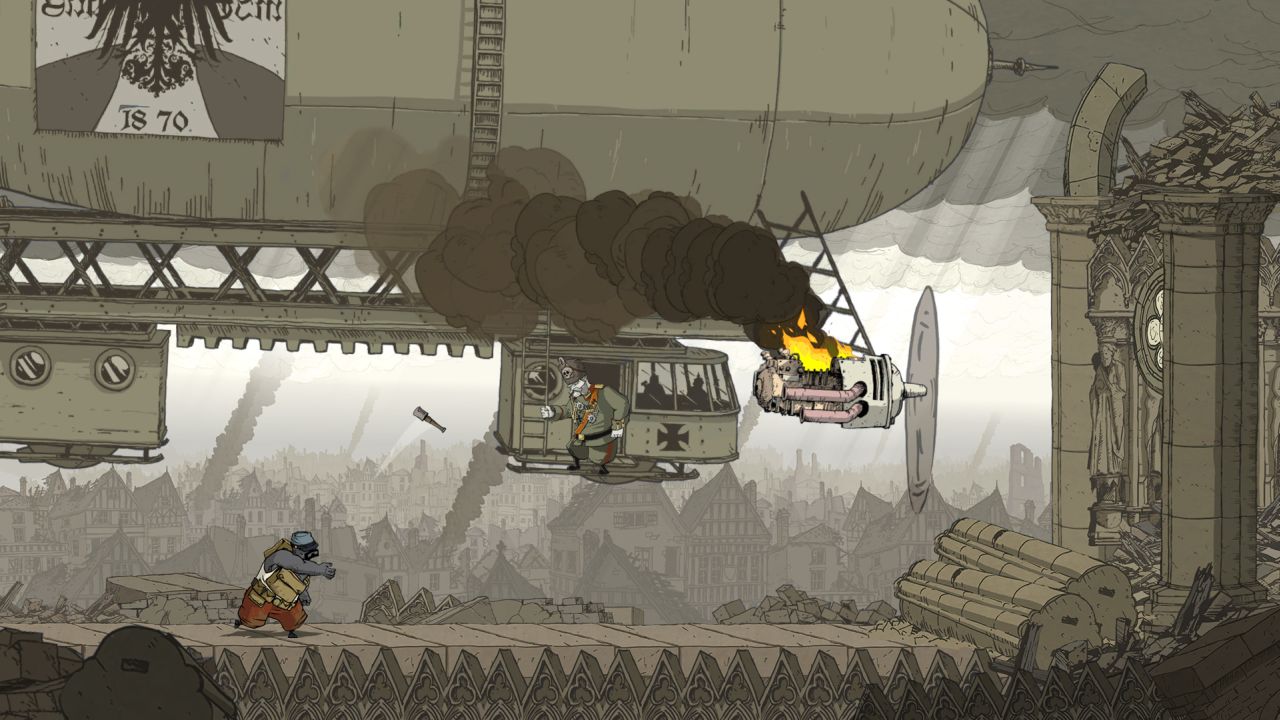 And speaking of story, Valiant Hearts was best when focusing on its characters and the minutiae of war. The introduction of the villainous Baron Von Dorf felt like a cop out, a face to the war’s unending evil that came off a little like a camp, cartoon caper. The car chase sequences, in which Anna drives her medic van, escaping other cars, bombs and tanks to the likes of the cancan, came off as a little contrived too, although somewhat fun in their own right. They just seemed to jar with the overall tone of the game, which for the most part was somber and thought provoking.

All this and I haven’t even mentioned Valiant Hearts’ central character, the medic dog, that finds – and through several strange circumstances, War Horse style – works with each of our main characters at some point. Despite that sounding clichéd and a little forced, I found it to be well implemented and an emotional and mechanical triumph. The dog links all the characters and their war stories together as well as aiding in strategic puzzle solving; you can use the dog to flick switches or retrieve out of reach items, expanding the language of the puzzles, as well as giving the game it’s truest, most valiant heart.

Overall, Valiant Hearts is more than the sum of its parts, and I found it resonating with me days after I’d seen the game’s credits. It’s a testament to the team’s research and respect for the Great War that a cartoony videogame of all things has such emotional weight when dealing with one of the most horrendous times in human history. 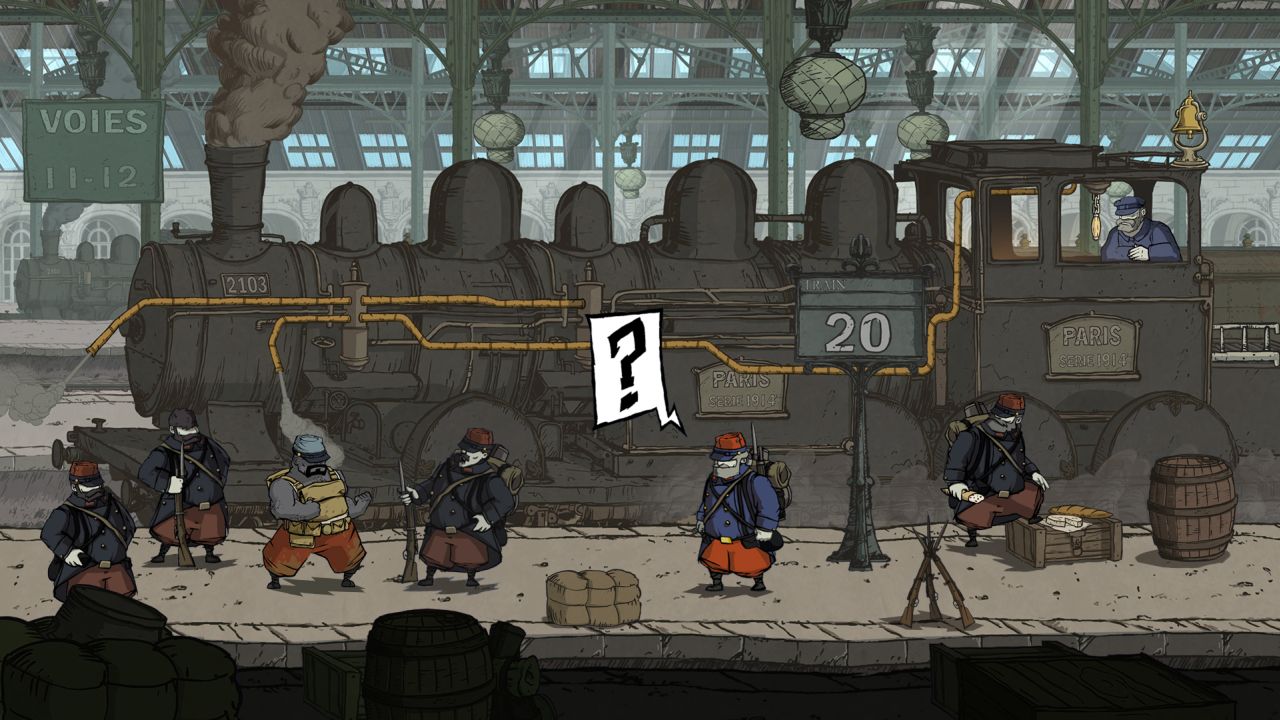 So no, this is not a lighthearted ‘gamey’ game, by any means, but who would have wanted that? Valiant Hearts is a powerful, rewarding and meaningful experience, and hopefully will allow the brave efforts of those who fought in World War 1 to be experienced and remembered in a whole new way.

Our ratings for Valiant Hearts: The Great War on PlayStation 3 out of 100 (Ratings FAQ)
Presentation
80
Beautiful hand drawn graphics in an illustrative style. Animations sometimes a little jerky. Jaggies on close ups can brake immersion. Otherwise gorgeous.
Gameplay
75
Solid and immersive, the puzzles are interesting and intriguing in a logical sort of way.
Single Player
75
Roughly six hours long, the campaign feels just the right length, spanning the entirety of the four years of the Great War.
Multiplayer
NR
None
Performance
70
Runs smoothly, but as previously mentioned, jaggies and wonky animations could be improved, especially considering the game’s engine shouldn’t be asking a lot of modern systems.
Overall
75
An emotional, rewarding take on the Great War in a medium that often glosses over the horrors of battle. Beautiful, sad, triumphant. 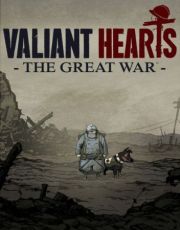 All videos for Valiant Hearts: The Great War (3)
Advertisement ▼