Bigger, but only slightly better

Some historical settings never leave the spotlight, it would seem, and even when most of the video game industry has moved on from World War II, there are still some franchises that place this event as a central concept. Earlier this year we had the over-the-top Wolfenstein, but now it is time for Sniper Elite 3 to offer its take on the Nazi killing. Following the rather disappointing sequel that failed to stand out apart from its sniping mechanics and an x-ray killcam, the third entry in the franchise attempts to improve in almost every area – but still comes up short. 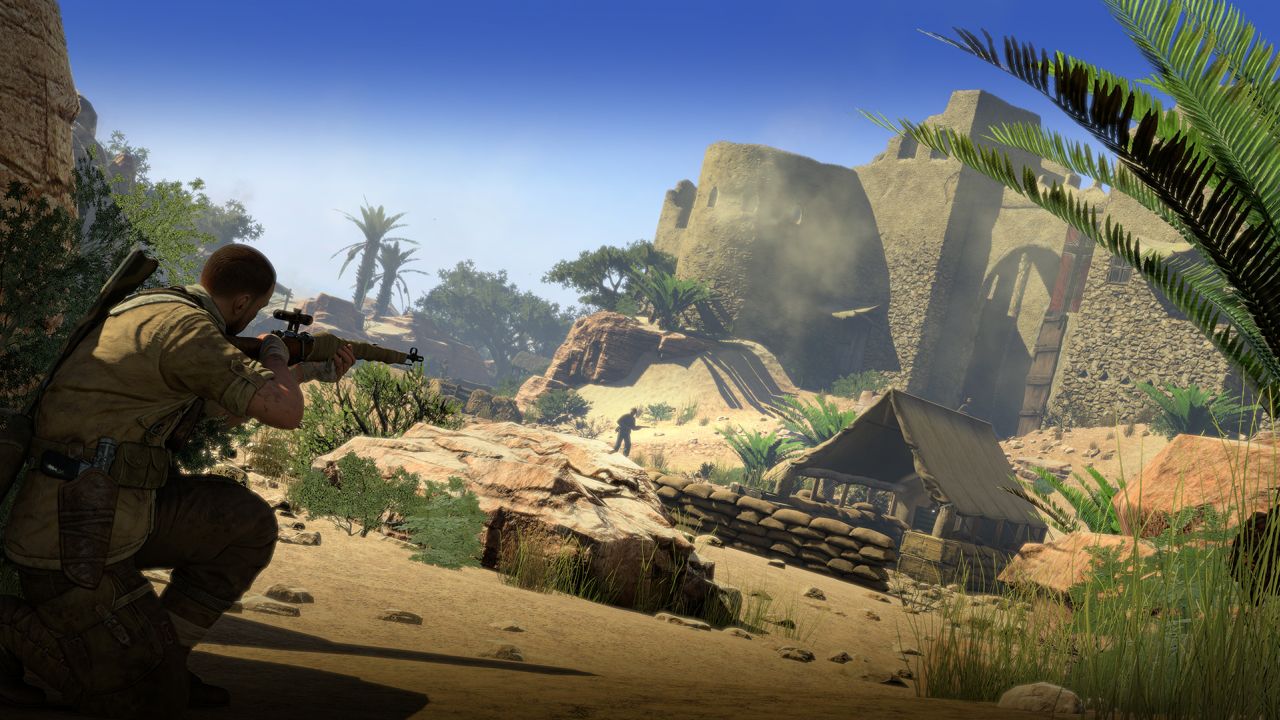 In Sniper Elite 3, players once again assume the role of Karl Fairburne, a World War II sniper. Trading in the dull grey environments of Berlin, he now finds himself in the hot deserts of Africa. This change in atmosphere is certainly welcome, giving some renewed life to the game’s visuals and setting. Your goal is to stop a certain General Vahlen and his experimental tank factory – but you accomplish this by a series of disjointed missions. There are pretty much no other characters in the game; perhaps a pleasant change from having some commanding officer scream in your ear every five minutes, but it also means the plot is easily ignored. You’re a one man army, basically completing assignments given by nobody in particular, and it feels like simple wrapping to string missions together. So just as before, players looking for a solid story won’t find one here.

During the campaign, players will sneak through a number of locales that include military bases, castles, villages, and so forth. This is where the game makes the biggest leap above its predecessor – instead of the claustrophobic, linear levels of V2, the third game offers players fairly vast, multipath environments. Depending on how you choose to play, the missions may take quite a while to complete as you sneak around the level, ignoring or eliminating foes. Almost all of the buildings are enterable, and the level designs offer a great deal of verticality, not just for the sake of good sniper nests but sheer exploration. The level design has all the potential for a very enjoyable and replayable stealth experience, though there are gameplay issues that get in the way.

A map is always available to the player, and it marks shortcuts, objectives and other points of interest. You’ll actually need to consult it on occasion to ensure the path you’re taking will lead where you want to go. Exploration of the levels is rewarded with optional objectives that you only discover when nearby. A couple of other new mechanics include the ability to explode vehicles by shooting their vulnerable gas tanks or engine, and loot bodies for ammo and items. For every action completed, including eliminating foes and objectives, players are rewarded with experience which unlocks new weapons and items, from the standard silenced pistol to grenades and C4 charges. Players can customize their loadout before every mission, and even upgrade their sniper rifle with a few new parts. 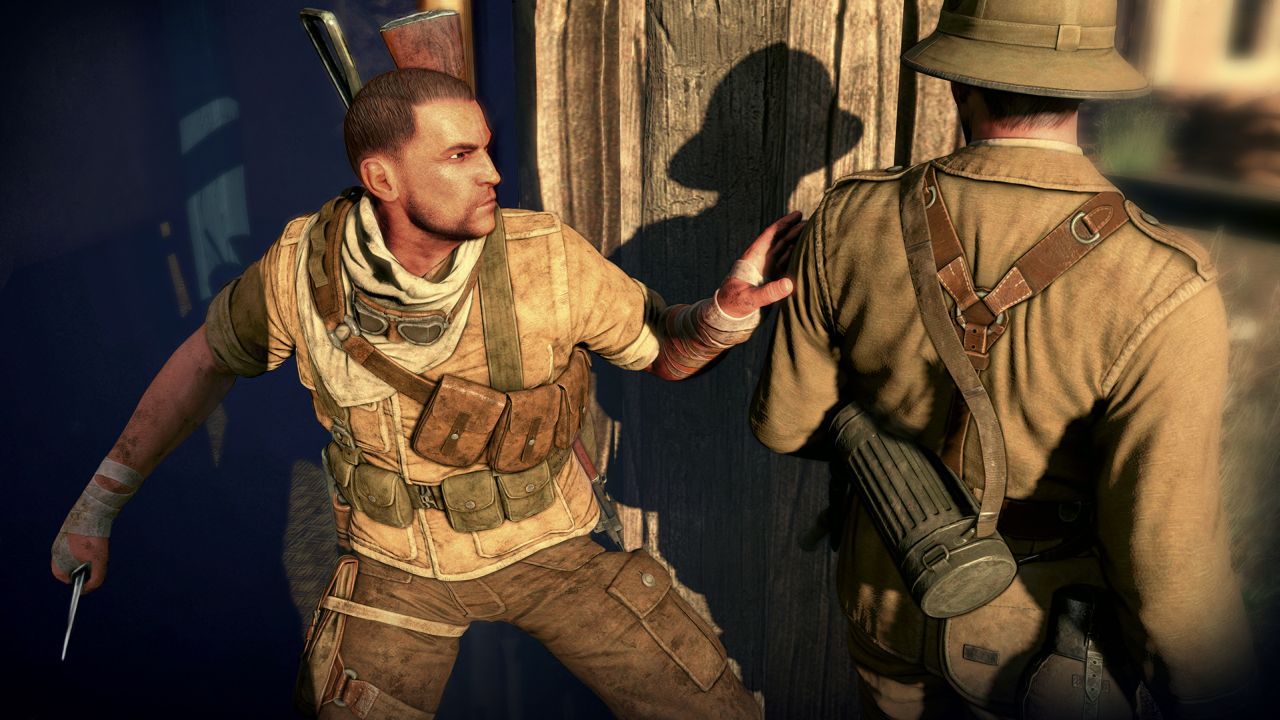 Now that we’re talking about weapons, let’s get to the meat of the experience. Sniping in the game is actually largely unchanged, meaning it still works rather well and is satisfying to use. If you’re familiar with the previous game, getting into Sniper Elite 3 takes zero effort as your rifles behave exactly in the same way. There’s still bullet drop and wind to account for, and players who choose the normal difficulty setting can utilize the visual aids when holding their breath to ensure that the shot lands. Pulling off a good shot still results in a gruesome x-ray deathcam of your victims. But now it’s no longer unique nor a real selling point, and just like in the original game, gets annoying relatively fast so you just end up skipping it.

Due to the open nature of the levels, there are actually much fewer opportunities for sniping if you want to avoid a firefight. In the previous games, the option for stealth was nonexistent due to level design, but this time around patient players can choose to eliminate foes with close quarters takedowns or silenced pistol. If you wanted to snipe without alerting the guards, players must seek out noise-making machinery such as trucks or generators, and often these aren’t in ideal locations. There are game-designated sniper nests, but these lack any noise masking, so using them pretty much means you’re going on offensive and every enemy in the area is about to start hunting you down.

But alas, herein lies the game’s biggest problem – the AI is still very uneven and unpolished. For a game that wants players to focus on stealth, that’s a dead end. This was a large issue in the previous game as well, and unlike many of the other improvements in Sniper Elite 3, the AI remains a big question mark. Enemies range from completely dumbfounded to superhuman with little reason, as they ignore bodies dropping all around them, yet suddenly become aware of your location from across the whole map. There is a last known position system, similar to recent Splinter Cell, whereas an outline of you appears and you must leave the area to be cleared of the search radius. But this system is broken half the time, acting as if you’re still being seen and tracked by the enemies as you’re sprinting through caverns with absolutely no outside view. It doesn’t matter, anyway, because taking out opponents is relatively easy as they rarely have any snipers of their own. 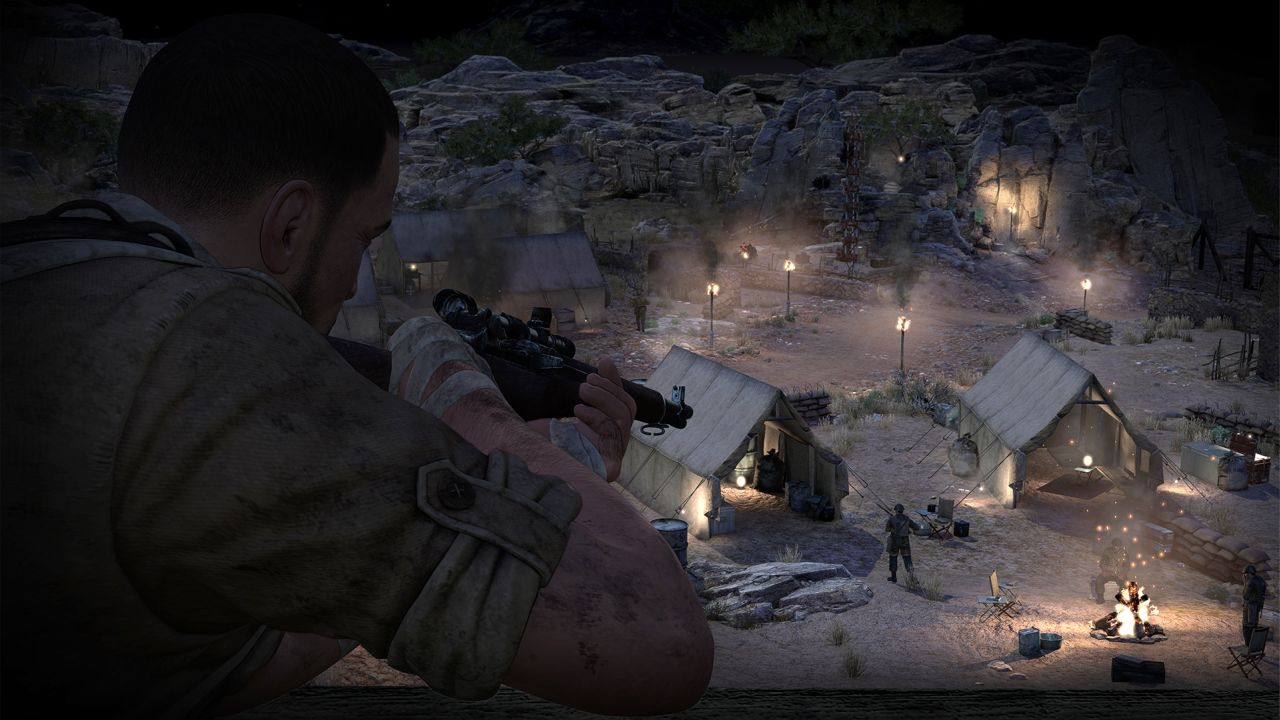 Yet you regroup, and try again. Perhaps this time, you won’t be spotted from across the field, and be able to sneak right in front of that guard who chooses to ignore you. You take out a few enemies with melee attacks, but not that one guy who is standing awkwardly enough for the takedown prompt to never appear (because takedowns from around the corner, behind a chest high wall, or any other angle are too complex for this game). You stumble around and finally lodge your knife into him, but not before he screamed out for help. The enemy is on alert now, and searching for you… for all of about 15 seconds. Merely moments later, everything is apparently OK again, and they go back to their patrols as if nothing happened. Sure, this is a game, and that’s what the enemies are supposed to do eventually, but Sniper Elite 3 just handles it poorly.

If the endless frustration with AI somehow doesn’t dampen your enjoyment of the game, the bugs surely will. There is a general lack of polish in Sniper Elite 3, whether it’s the ragdoll physics freaking out, enemies shouting for alerts while in patrol mode, and sound like they are around the corner when in reality there is nobody around at all, and so forth. Karl handles rather awkwardly, and the camera can be uncooperative while the FOV is also a bit limiting. Both player and enemy animations have a few rough spots. None of this is necessarily game breaking, but it all adds up.

The audio is largely recycled. Everything from your rifle shots to enemy chatter and even the background music sounds much the same as before. Visuals are at least an improvement – the bright style of the African setting helps the game stand out, and the sharp textures and improved lighting make the game look quite good in spots. However, there are problems with draw distance and object pop-in; a very notable issue for a game centered around long range combat. The loading times are very quick and the game doesn't seem to have any framerate problems. 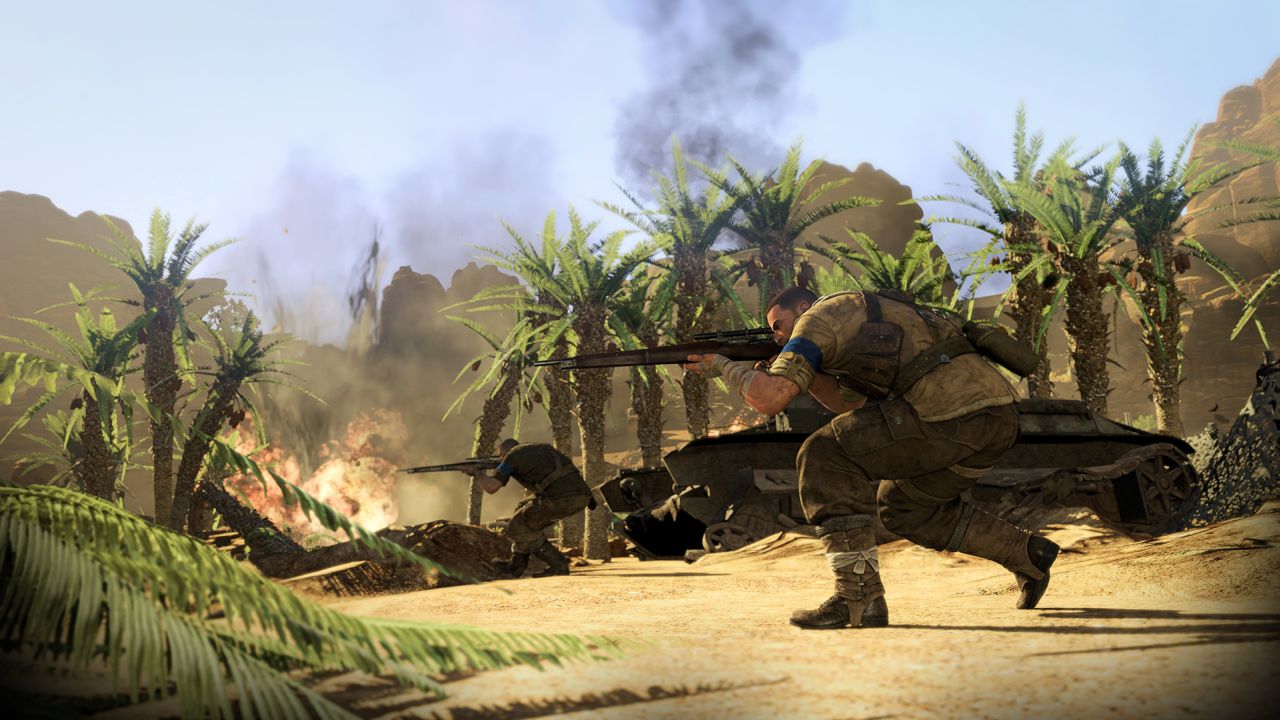 After you’ve completed the campaign, there are online modes to delve into. As last time around, the campaign can be played with a cooperative partner, making things a bit more fun and great for living out a deadly bro-team fantasy. A mode called Overwatch also offers an asynchronous option, where one player is limited to being the spotter to the sniper, but there are merely two scenarios to play through. Still, fans of cooperative play will find some enjoyment with Sniper Elite 3’s offerings.

If it’s competitive play you’re after, the game also offers decent value. The stock standard deathmatch and team deathmatch modes offer thrilling cat and mouse combat scenarios through a few different maps, which are much more suited for long range play thanks to the expanded level design. If you play with and against players who follow the rules and enjoy the slower pace of the action, there’s much enjoyment to be had here. A new Distance King mode scores teams and/or players based on the longest cumulative shot distance, while No Cross forces the two teams to remain on separate sides of the map and engage at long range only. Your XP earned in the campaign carries over into online play.

When it comes down to it, the overall design of Sniper Elite 3 is surprisingly enticing. It’s a step above its predecessor, with open levels, inventory customization, and so forth. But it’s all undone by some sloppy AI and technical issues that will happily flush your 30 minutes of stealth efforts down the drain with one awkward interaction or bug. But even that doesn’t matter, as you simply escape and try again. The new African setting definitely helps the game stand out a bit, and expanded multiplayer options will please fans of the long range encounters. Overall, however, the new additions can’t help the game still struggling under the weight of technical issues and bullet holes in design.

Our ratings for Sniper Elite 3 on PC out of 100 (Ratings FAQ)
Presentation
70
The game looks sharp and runs at a smooth framerate throughout. The new desert setting helps the game stand out. Most of the audio feels recycled however.
Gameplay
62
The core sniping mechanics work just as well as before, but the xray death scenes are no longer a new concept. While expanded levels provide a ton of replay value, serious issues with AI continue to plague the franchise. Up close and personal combat is awkward and unreliable.
Single Player
78
A series of large, mostly disjointed levels held together by a thin story. Lots of replay value, and can be completed with a coop partner.
Multiplayer
68
A couple of standard modes, offering nothing groundbreaking. The interesting asymmetrical Overwatch only offers two missions.
Performance
(Show PC Specs)
CPU: Intel Core i5-4670K @ 3.80 GHz
GPU: ASUS Radeon R9 280X DirectCU II
RAM: 16GB DDR3
OS: Windows 7 Professional 64-bit

75
Some object pop-in and issues with draw distance. General gameplay bugs and ragdoll issues. Quick loading times.
Overall
70
Sniper Elite 3 puts in a respectable effort to improve on its predecessors, with bigger levels and more gameplay variety, but is ultimately let down by bugs and a lack of polish.

All videos for Sniper Elite 3 (6)
Advertisement ▼