One of the more mysterious new IPs set for release in 2015 is The Order: 1886, a PlayStation exclusive being developed by the studio Ready At Dawn. Best known for the PSP ports of God of War games, many have been interested to see how the studio handles bringing a new IP to the PlayStation 4. Sony has taken every opportunity to show off their newest property at E3 this year, so I was excited to go hands-on and see what all the fuss was about.

The Order wasted no time and threw me right into the fray. The setting is Victorian England, just like the year 1886 would suggest. The skies are overcast and cloudy, the colors are grey, bleak, and washed out. However, there isn’t much time to observe the scenery as gunfire is coming in hot and heavy.

I attempt to snap into cover, but find it a bit difficult. Finally, my character puts their back to a post and gets ready to return fire. Each character in The Order: 1886 has their own type of weaponry, and Ready at Dawn promises players will get to use multiple weapons which take advantage of the steampunk setting, but I was only privy to one of them. In this demo my gun’s primary ammo was gas pellets, then a secondary shot would ignite the gas coating my enemies in fire. The gameplay loop of blanketing an area being used for cover with these pellets, then lighting it ablaze is good fun. It invokes a strategy of set ‘em up and knock ‘em down, making you feel like you are one step ahead of your opponents.

From my cover, I laid waste to my enemies, who seemed to be infinite, continuing to rush into the same cover time after time. One of my companions called out to me, drawing my attention to a constable lying in the street, badly wounded. Breaking from cover, I walked toward the fallen comrade, continuing to lay down suppressive fire. Pressing the triangle button, I put the constable’s arm around my neck and pulled him into the safety of a nearby building.

Sony and Ready at Dawn like to draw the player’s attention to how seamlessly the game transitions between gameplay and cinematics. One has to tip their hat to the hard work of the developers and the power of the PS4, as the gameplay and cutscenes look impressively similar. The animations, the detail, it is all very impressive, and the facial capture allows for subtlety in the acting. The Order: 1886 looks to be on par with The Last of Us and Infamous: Second Son in regards to its motion capture technology.

Once secure in the house, away from the gunfire of the streets, knighted comrades and I discuss the best way to escape. While the task of getting out of the room is assigned to me, the other knights attend to the fallen constable. I begin searching around the room, finding a scrap of a map with names scribbled on the back. Unsure of what use the map served, I left it and continued to look around the room. A cast iron stove had toppled over, blocking our way out. I coat the stove with my gas pellets, then set the thing ablaze. The fire melts the iron and we are able to escape.

The way out of the building leads to another firefight. Again I try to get myself into cover, but have trouble getting it to work. When I do finally manage it, I have a bad angle on the attackers. In the end, I leave cover and simply strafe back and forth, peppering the gas pellets, then igniting them. I spread fire throughout the battlefield, and enemies are engulfed in flames before they even have a chance to return fire.

After clearing out the area, the demo comes to an unceremonious end. While playing around with the gun provided was interesting, it was a short period to try and get a feel for the game. It will be interesting to experience more of the sci-fi weaponry as the game gets closer and learn more about the team of knights the narrative seems to follow. What was obvious in the demo is Sony has another title which is looking to provide the cinematic third-person experience and take the next step in blurring the lines between cinematics and gameplay. Look for The Order: 1886 to be released exclusively on PlayStation 4 in February 2015. 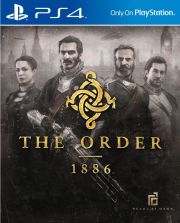