We finally get some hands-on time with the horror title

In case you have been living in cave on Pluto, with your eyes sewn shut and your fingers inside your ears, Shinji Mikami, creative director of the original Resident Evil and Resident Evil 4, is making his return to the survival horror genre with The Evil Within. We’ve been following this project since it showed up at last E3 and then at PAX with mixed feelings. So I was ready to get a hands-on opportunity at E3 2014 with Mikami’s latest work as this would likely be our last chance to see the game before its release.

One might think horror games would work well with hands-off demos, but The Evil Within is a game which is much better when you are actually playing it. The game has a handful of mechanics not overtly present when watching it on a screen. The first is how often you find your ammo depleted. While I was able to scavenge bullets, matches, and health consistently, a hard cap on all items makes you return to your scavenging ways after every encounter. You’re always looking for ways to ensure your survival, forcing you into the dark corners and decrepit rooms you would rather avoid. These ammo constraints make you think about combat more strategically. Sneaking up behind enemies is important, scouting and disarming traps will prevent wasteful loss of life, and burning enemies ensures they won’t return to use up more of your bullets or health. There are also times in The Evil Within when you won’t be able to kill an enemy, when the best idea is to run for your life. 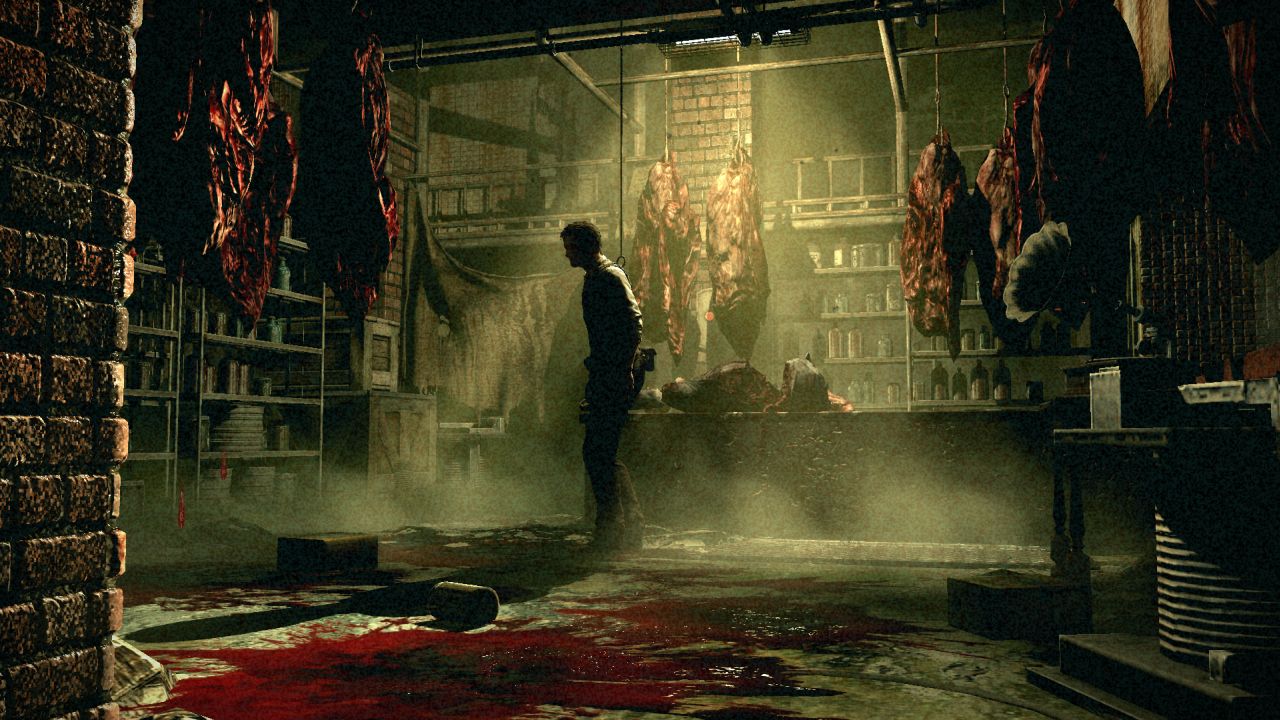 As we depart our theater presentation and move to a hands-on experience, we are cautioned there are two demos, one of which is incredibly gross. I already know The Evil Within can be unsettling - the trailers show off the blood-splattering and disfigured creatures which make up the world - but I want to see if The Evil Within can be scary.

I start the demo with a doctor who is following me around. We are in a run-down village, filled with old fashioned homes made of wood. As I approach an open area of the town I find three humanoid creatures burning a mound of bodies. These creatures move slow like zombies and wield melee weapons. They would be human except for the horrific ways their faces have been twisted and altered. With spikes shooting out of their heads, slabs of metal holding open wounds together, they are a disgusting lot.

I attempt to sneak up on one of them, but am quickly discovered and start firing off shots from my revolver and shotgun. Soon I am down to little more than a couple of bullets, with little health to speak of. I burn the corpses, using up all of my matches and wonder if I’ll make it through this demo with so little left.

I find an open door to a house in the center of town. Creaky and dark, the house is perfect for rising tension. I pull out my lantern, knowing I’ll be giving away my position, but figuring its better than being left in the dark. I slowly and systematically begin working my way through the building. I could swear I’m hearing the moans of an enemy, but can’t be sure it isn’t just the creaky floorboards. I make my way downstairs to the basement of the house where the doctor recognizes a friend. Or at least he was a friend; this portly man has stitches all over his face and is cutting open a corpse with vigorous zeal. He turns toward the doctor and myself, then approaches us, menacingly. 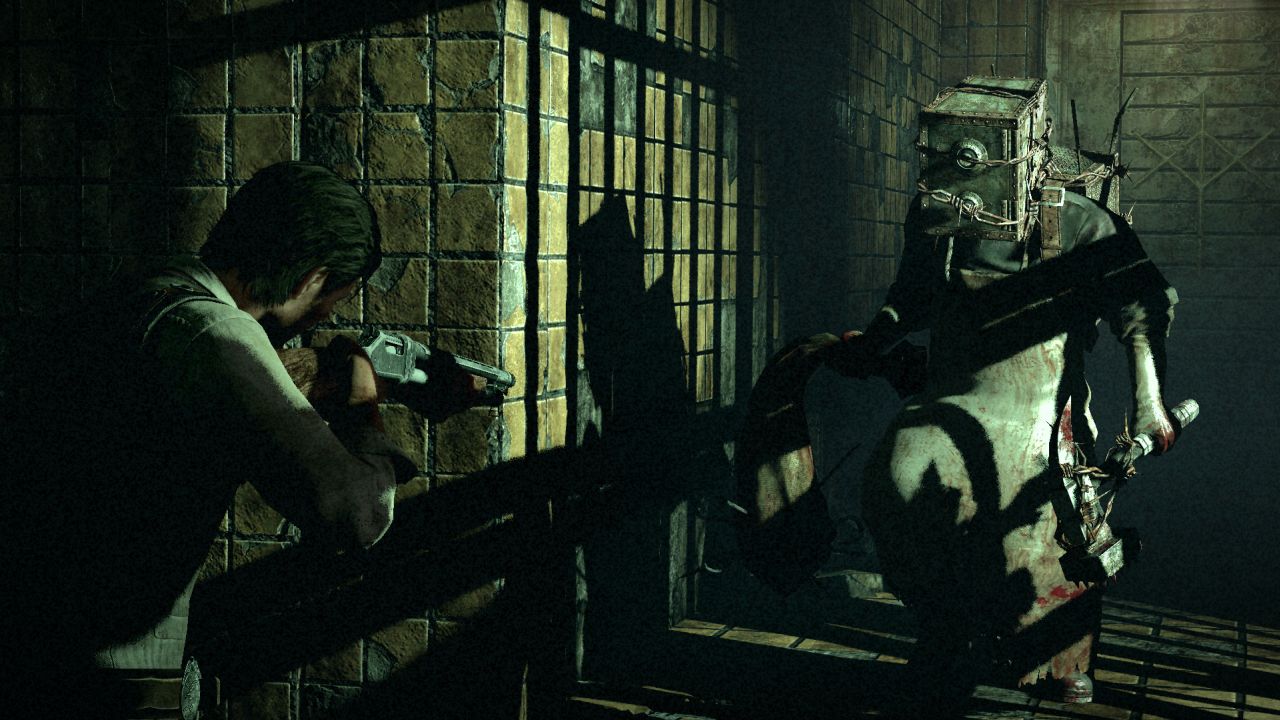 I don’t have the ammo or the health to trade blows with this large enemy. Instead, I pull out my last resort: The Agony Crossbow. Two bolts and the chubby, demented friend of the doctor explodes in blood and intestine. I search the room looking for items to compensate my troubles. There are a couple of bullets, but little else.

I head back to the top of the house and continue my search for more items. Again, I could swear I hear enemies. A noise from outside catches my attention, someone is calling for help. I check the last room of the house where another undead menace catches me off guard, causing me to jump in fright. I pull out my revolver and dispatch the enemy with a couple of good shots. Finally, I am able to find some shotgun shells, health, crossbow bolts, and matches. Feeling a little more confident, I leave the house and look for the survivor.

Back in the open town square, I run into another fat, bloated enemy. An understated part of The Evil Within is the weapon wheel, which doesn’t stop time, but slows it down to make sure you are grabbing the right item. While shooting might not be the emphasis of the game, it still feels tight. I switch between my revolver and shotgun, then blow the big boss to oblivion.

I check the house the large enemy was guarding, continuing to stock up on supplies. The way the lead character, Sebastian Castellanos, traverses the world feeds the horror nature of The Evil Within. Castellanos creaks a door open, as if checking it for surprises before opening it, giving you a moment to brace for something to jump out and scare you. The same is true of opening up chests, thrusting you into first person view as the chest unlocks and your mind races with what horrific creature might pop out. Much like Resident Evil, it's rare that anything actually happens in these moments, but the tension is present every time. 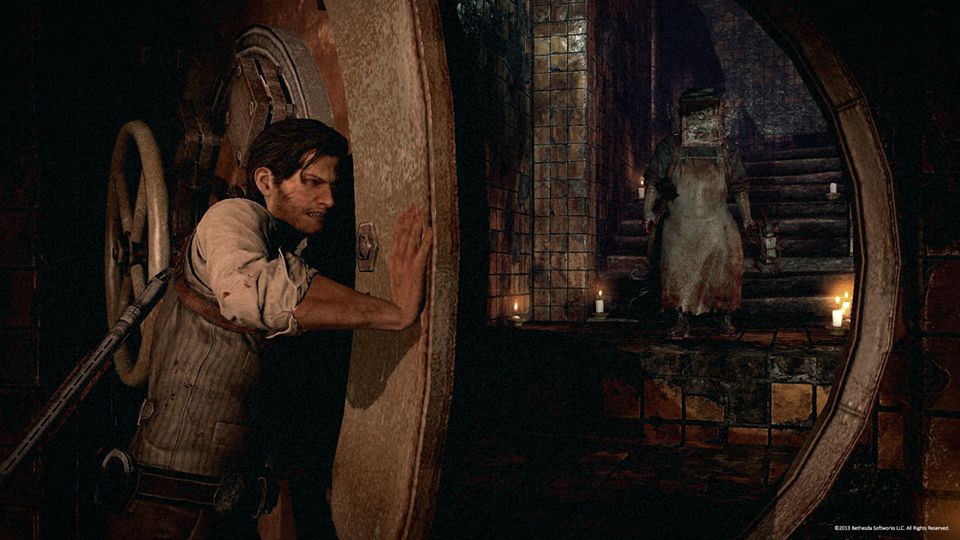 Finally, I track down the survivor hiding in a different house in the village. He cowers as the doctor and I approach, muttering about death and damnation. That is when I catch a glimpse of the main antagonist of the game. Cloaked in white, with a face filled with stitches, he vanishes as quickly as he appeared.

The doctor and the cowering survivor have left my side, I am in an empty hallway. I approach a door at the end, which bursts open and fills the hallway with blood. As the blood is about to drown me, it disappears, leaving the hall as dry as a bone. The door at the end of this hallway is open and a corpse lies in the center of the room. I cautiously approach and suddenly the stomach of the corpse it torn open as a spider-human crossbreed emerges, a disgusting mix of legs and a human head.

I fire my shotgun, but it's in vain. This enemy does not feel pain, cannot be killed, and my only option is to run. I head back the way I came, a side door opens and an undead enemy flies out. I dodge past this enemy and keep running. Suddenly, Castellanos stops, his hands go to his knees and he tries to catch his breath. A stamina meter controls how long Sebastian can run and I have depleted it quickly. The human-spider is gaining on me, as I anxiously watch the stamina meter, quietly urging the protagonist on in my head. Finally, I am able to run again and sprint away from the monster into a room with a ladder, leading deeper into wherever I have been transported.

I descend, continuing to push Castellanos as fast as I can, though more aware of his stamina. Traps bar my progress, making me stop and disarm them before progressing. The spider-like monster is still in pursuit, slowly gaining. I disarm the last trap and run into an elevator, the doors slamming shut behind me and descending deeper into this horrifying world.

The elevator opens to room filled with a liquid I don’t want to know the origin of. The white cloaked villain appears again, summoning numerous enemies - a mix between the regular undead and the big hulks - then disappears again. I attempt to sneak around, searching for ammo I can use to my advantage, then pop out and open fire. Quickly, I am overwhelmed. There are too many of these monsters. I climb a ladder, looking for a way out of the room, but only find a dead end. The undead are right behind me, there’s nothing left to do but pull out my guns and hold out as long as a I can. Luckily, the ladder bottlenecks the enemies and I am able to take them out, depleting all of my ammo. After the final hulk has been laid to waste, I light the mound of corpses on fire and breathe a sigh of relief.

I leave the room filled with a dark liquid and the corpses of my enemies to find a series of stairs leading deeper still into whatever strange complex I am in. As I start down the stairs the white cloaked stranger appears again. I turn and run back up the stairs. When I finally reach the top, the room shakes and I fall down, deep into the dark. The demo is over.

Getting my hands on The Evil Within fried my nerves. There are plenty of traditional scares in the game, but the title is at its best when it forces you to explore the dark corners of the world, making you expect the jump scare but withholding it to keep you guessing. The Evil Within is being developed by Tango Gameworks and is set to be released in October on PC, PlayStation 3, PlayStation 4, Xbox 360, and Xbox One.