Spread the inquisition across the land and save this world

The original Dragon Age from BioWare was a hit with RPG fans, even given the game’s long development cycle and some rough spots in the presentation and mechanics. The sequel quickly followed and, unfortunately, took on a wholly new direction that focused more on action than strategic planning, and felt rushed, with repetitive locations and lacklustre gameplay. With Dragon Age: Inquisition on its way to store shelves this Fall, we had a chance to check out a hands-off gameplay presentation at E3.

The demo was hosted by the executive producer on this title. We were shown the new E3 trailer, and told that our lengthy presentation will focus on trying to resolve an ongoing conflict between the Mage and the Templar factions. To start off, players will be able to create a character of either sex, with four races and 3 classes to choose from. For our demo, the hero was a Qunari mage. We started the game in a forested area with distant mountain views, as the producer told us that players will be able to travel anywhere that the eye can see. There are snowy mountains, deep caves, dangerous swamps, and so on. Undoubtedly a claim like this is a nod to Skyrim, however as we explored the forest it later became obvious that while Inquisition may have the largest world in the franchise, it is still strategically terraformed to contain players from wandering off. 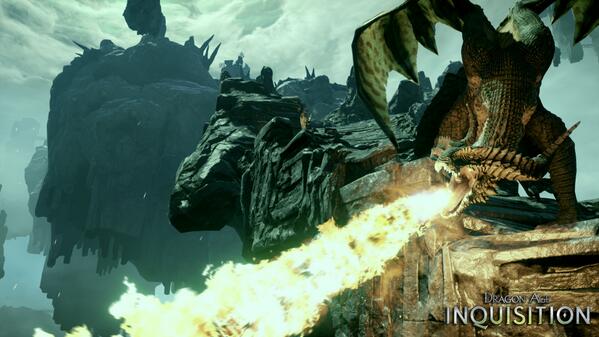 As we walked through the forest, we stumbled across quests from NPCs who have suffered due to the above-mentioned conflict between the two factions. It is up to the players to take on these sidequests or move on. While exploring we also collected some raw ingredients, to be used for crafting and the like. The game world is also going to be dynamic and respond to player actions – for example, if you extensively hunt local wildlife (such as bears) for raw materials, they will see their population drop significantly. Likewise, liberating villages and expanding your inquisition will let friendly troops roam the area to help keep the peace.

While we continued through the forest towards our destination village, it should be noted how pretty the environments looked. Because of the default over the shoulder perspective, the world felt closer and more alive than in previous games. It also helped that the colors were bright and vibrant, and textures seemed high resolution and well detailed. Upon reaching our destination we came across a group of hostile Mages and a fight broke out.

Here we got a first look at the DA Inquisition combat. The third person action mode seems to be the definitive design choice for handling fights in the game, as our hero began firing ranged magic attacks at the foes while the other three members of your party also rushed in to help. We were casting spells, actively dodging, and the whole scenario felt a bit like an MMO in the way that the characters behaved and damage was being dealt. Firing ranged spells and performing occasional dodges, the camera was also helpfully zoomed out when trying to cast AoE spells. Should you want to, there is still the option to pause the battle and overview the situation from a higher camera angle. From this view you can analyze what your team is doing, and what conditions the enemy are currently suffering from, their health, and so on. You can then queue up various commands for each individual member of your entourage and execute when time resumes. The GUI was notably large, very friendly for playing on a TV and with a controller. 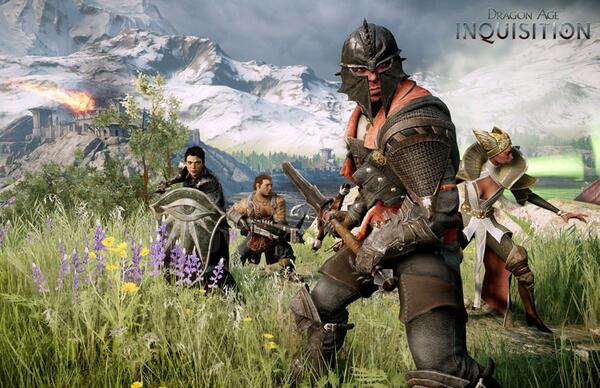 After the fight there was still a ways to go until our destination, so the developers showed us a glimpse of the world map. Players can fast travel to previously discovered locations, as the map is actually hidden and only reveals itself as you explore areas. To help with traversal, for the first time in Dragon Age you can use a mount (a horse in our case, but better and more rare mounts were promised). Riding through the woods, we came upon a hillside village that lay at the foot of the castle where we were heading. Here we walked the streets and saw various vendors, quests, and NPCs having idle chatter. We were not ready for the castle assault yet though, as our gear was not yet up to par.

In Dragon Age Inquisition, character and item customization has been expanded to give players the greatest amount of choice possible. The new crafting system allows for items like armor and weapons to be unique, getting you the look you want with the stats that keep you alive and dealing massive damage. Character levelling works as you would expect in an RPG, and BioWare promises over 200 talents and spells to choose from. You can also fully customize the members of your party, and indeed take direct control of them in battle as if they are the hero – meaning their stats are just as important as yours.

The requirement for well trained and equipped characters is said to be a crucial factor for player success. Our demo showcased a battle with a dragon, said to be one of the toughest foes in the game, and ones that will easily overpower unprepared parties. The demo crew was well outfitted however, and after a lengthy battle sequence were able to get the best of the beast. We watched as the battle switched between multiple perspectives, either on the fly or during the pause mode. With the focus on third person action, the game utilizes a straightforward control scheme: a dodge button, three attack buttons, and one special ability. This may come as a disappointment to fans of the original game and having the option to use a wide number of spells and attacks at any given time. Perhaps that is also possible in Inquisition – but the developers would not comment. 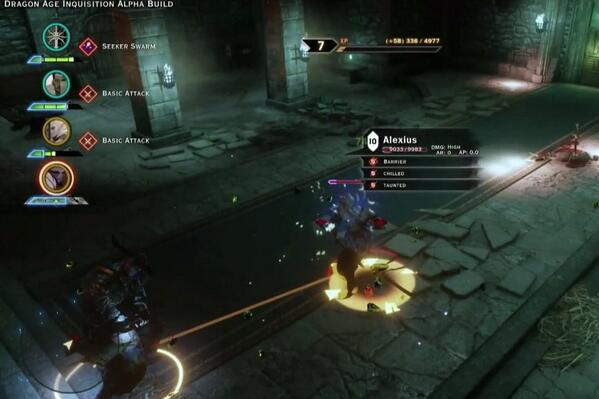 There will also be a central hub known as the War Table. Here, players will be able to oversee the spread of their inquisition efforts across the game world. You can also send out command forces to take over territories, send agents to gather intelligence and explore the map, plus other actions. However, we did not see this mode in action.

Our demo at this point has fast forwarded, in the interest of time, to the castle where we ventured through linear hallways and dark dungeons. We are reminded that the main character survived the very first Rift opening in the game world, and thus has become the leader of the inquisition movement to retake the land and close the many smaller rifts that have opened up. In the castle we got to see our team fight some dark magic foes, and close a small rift from which they were spawning. It was in the dungeons that we rescued a character who had agreed to go with us to the top of the castle, where one of the Mage leaders resided. He had in his possession an important amulet, which was the whole goal of our story mission.

Upon reaching the upper chambers, we tried to reason with the mage, using a familiar conversation wheel with an icon presenting the tone of your conversation choices. Because we had our newly found companion along, she provided new dialog options that would otherwise be unavailable. Sadly, it wasn’t long before our newest friend decided to anger the mage, and a boss battle began. At first we dealt damage directly, switching between characters to optimize our attacks and occasionally pausing to queue commands and remain in control of the chaos. After a while, the mage hid behind a magic barrier and opened a rift, through which new enemies appeared. The party had to deal with them and close the rift, and then continue their assault on the mage. After a while, he fell, and the amulet was ours. Here once again we had a few conversations with our companions to get their feel on the day’s events. 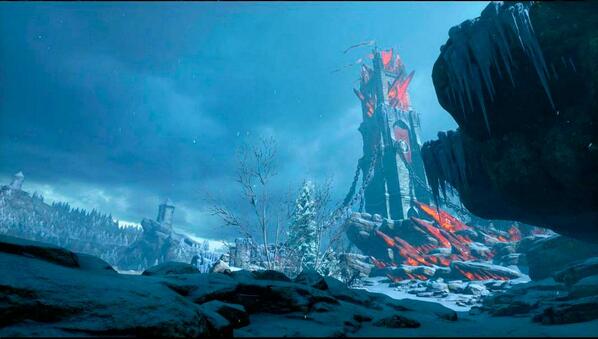 BioWare says that Dragon Age Inquisition truly represents the next generation for them. With an expansive world, deep customization, and active yet tactical combat, this is the game that the studio has always wanted to make. From what we saw with the lengthy demo at E3, they are certainly on the right path to create a much better game than Dragon Age 2 was. Fans of Dragon Age: Origins may want to check their expectations before diving in. Look for Dragon Age Inquisition in stores this October on PC, Xbox 360, Xbox One, PlayStation 3, and PlayStation 4.