Welcome to the digital era, we already have your contact information

You'll find yourself in many pursuits against foes or the police, and the escape works much the same as other open world crime titles. You must first lose line of sight, and then evade the pursuers until you leave the search area. When driving, Aiden has the ability to hack various objects to aid in the escape. You cannot return fire, so you must use the environment - changing lights at an intersection, raising bridges, barricades, and spikes, or even temporarily disabling the helicopters chasing you. You can do it in advance, or wait for a prompt that if timed right will instantly disable one of the foes.

Having said that, escaping is more challenging that it sounds, even at lower heat levels. When going up against the AI on foot and in firefights, they behave predictably - taking cover and shooting on occasion, flanking when possible. When driving however, they are smart, boxing you in, shooting at your car and tires. Most importantly, when they encounter a blocked street or raised bridge, rather than giving up pursuit they will actively drive around the block in order to get ahead and cut off your path. Watch Dogs features some of the best vehicle pursuit AI seen in recent years in open world games. 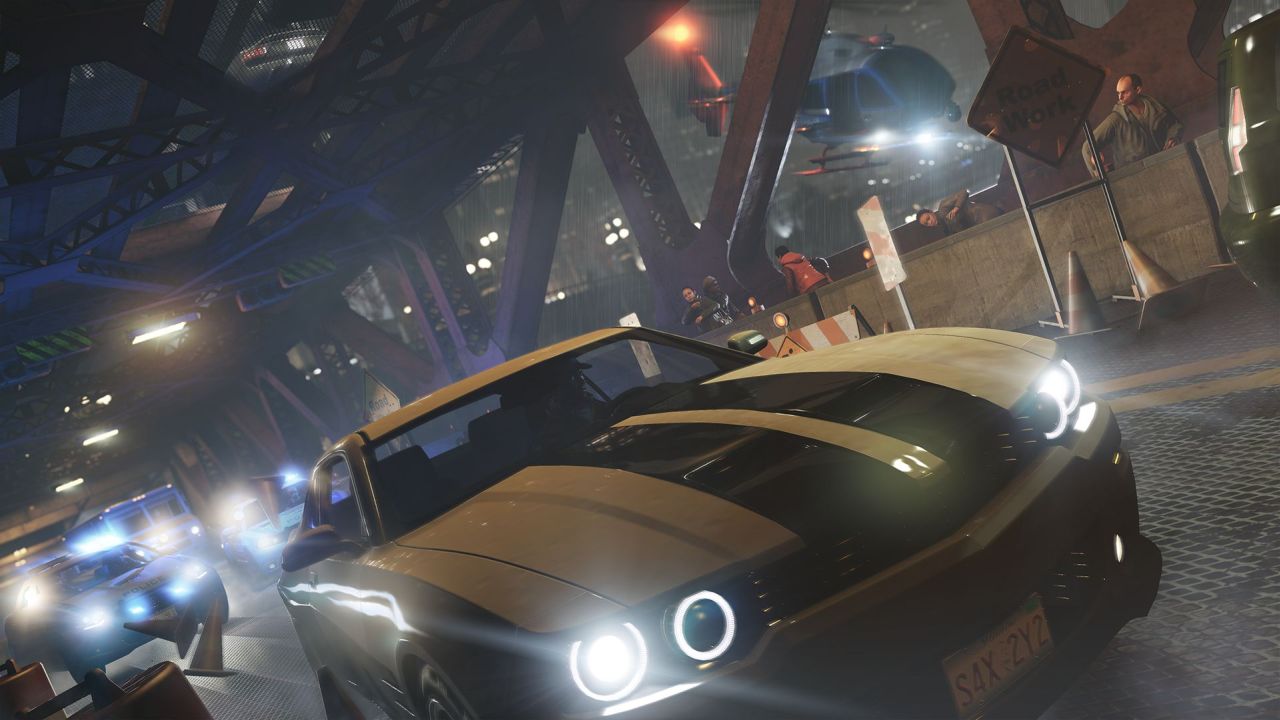 When you're not playing through the story, there are an absolute ton of side activities to take on. Aside from the usual slew of collectibles to find (new cars and music tracks, etc), minigames to complete (chess puzzles, drinking, betting and more), and even check-in at popular landmark locations, there are also alternate experiences. Aiden can participate in races across the city, shooting missions, and even induced hallucinations - all with special 8-bit graphical effects or simply outlandish settings that were seemingly inspired by Far Cry Blood Dragon. All of these activities are well designed and offer tons of opportunity to divert player attention.

Other activities offer a narrative thread to follow up on, such as human trafficking and weapon imports, but are basically more collectibles to find and puzzles to solve. Or you can participate in stopping street crime, illegal convoys, or clear out gang hideouts. Most missions contribute to your positive reputation within the city, which means citizens are less likely to call the cops if they see you commit a crime or even carjack them. However this reputation meter is slow to move in either direction and unless you take serious time to run civilians over or help with crime, it won't move very much.

Finishing most activities in the game nets you XP and cash. Much in the same way that the game starts you off with enough skill points to be dangerous, the cash and experience rewards for completing objectives are generous, meaning you can progress quickly and never feel unprepared for a mission. Skill points are earned fast so you can expand your abilities in one of four categories - driving, hacking, crafting items, and combat. The abilities you unlock in each category are self explanatory - from a larger arsenal of hackable items, to faster weapon handling, to better car endurance and so forth. The crafting system lets Aiden create various throwable objects - from distracting radios to EIDs and grenades, or even cause a block-wide power blackout. These are created on the fly with ingredients if you have collected enough, or can simply be purchased at the store. 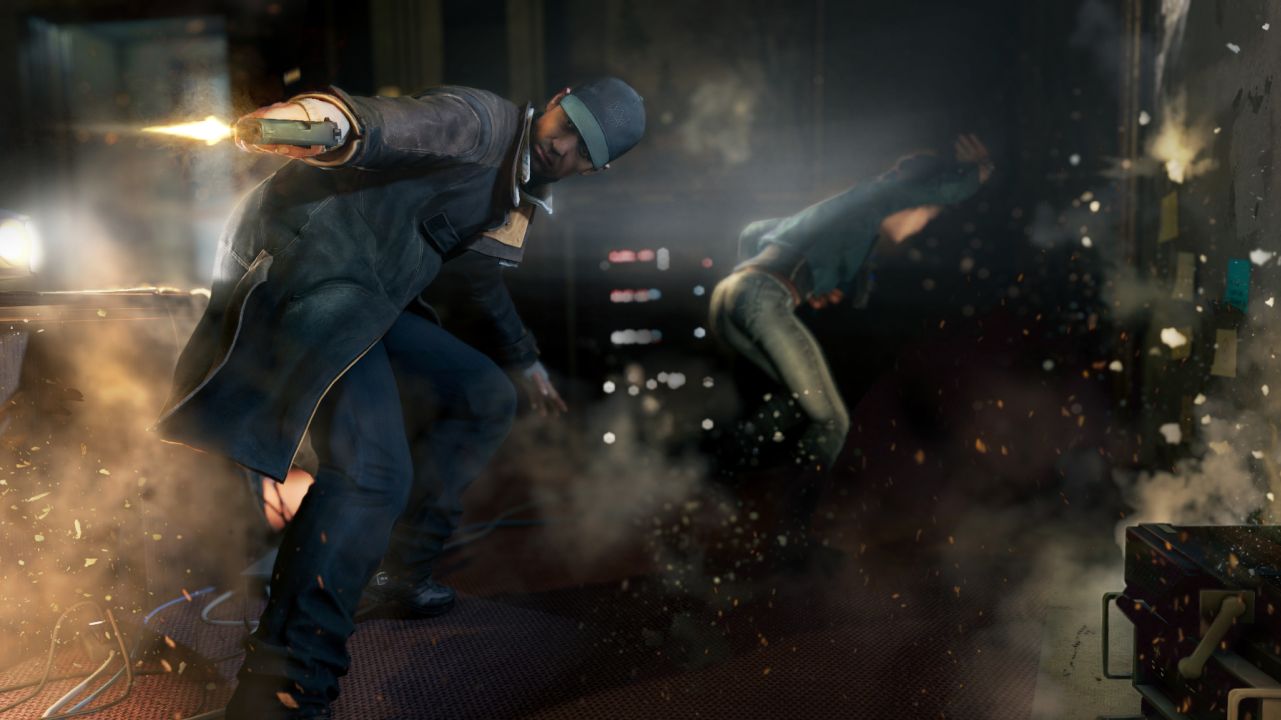 Exploring the city and outlying areas is purely optional, because everything is available to Aiden right from the start of the game. It wouldn't make sense having to unlock parts of the map that are invisible (like in Assassin's Creed or Far Cry), however that doesn't mean there aren't still towers you need to reach and hack. Doing so reveals all collectibles in the area as well as safehouses for fast travel, so it is purely optional, but yet another puzzle to solve in a city already chock full of content. Plus you'll get to check out some great vistas and the immense attention to detail, even in the furthest suburbs and nearby towns.

Before you get too far into the storyline, Watch Dogs will setup a player invasion. This is your seamless, abrupt introduction into the online world of the game. The setup is that as long as you're online, other players can invade your single player experience with a goal to either hack you or tail you. You'll be notified when this happened, and you must use the profiler to scout the nearby area and ID the invader - they cannot harm you, or their points and progress is lost. Should you succeed, you must kill them before they escape. Even if the objective is not fulfilled, both players will usually be rewarded with Notoriety points.

At any time, you can bring up the online menu and start invading - or the game will also frequently offer sessions to jump into. If you are invading another player, it is less seamless as there is a loading screen to put you into the area of the target. Those are the two 1 vs 1 seamless modes, and given their cat and mouse nature, they are well balanced as Ubisoft has perfected this type of play through the Assassin's Creed multiplayer.

There are a few more multiplayer activities to partake in - free roam is self-explanatory, with up to 8 players getting together either for coop or adversarial activities; car racing is similarly straightforward. Decryption is somewhat similar to capture the flag, while the special Mobile challenge pits you against players who are using the Watch Dogs App on their tablet device, controlling the cops as you attempt to race through checkpoints. All of the modes work well, with almost no waiting and a far cry from the awful Grand Theft Auto V online launch. 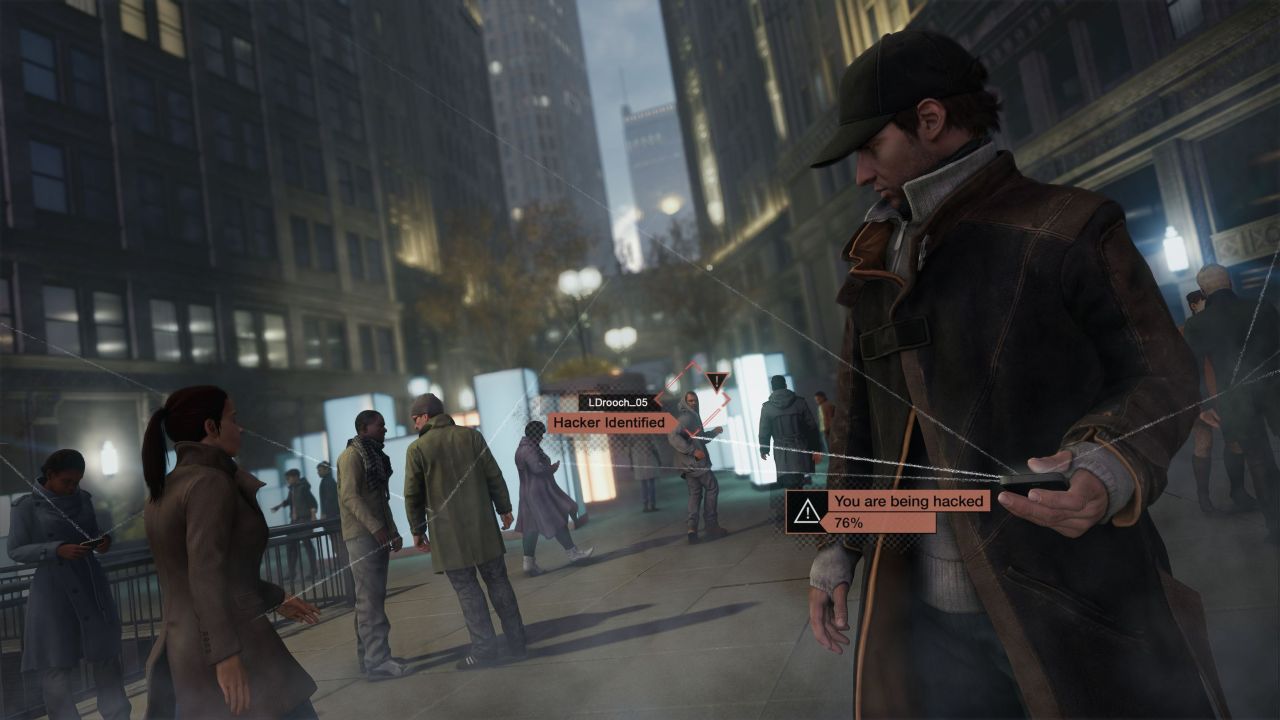 Players get to bring all their skills and abilities from the single player campaign into the online worlds, so your hacking tools are at the ready to put a dent into the competition. However there's also the notoriety system, whereas you can earn additional boosts to a few of your abilities by participating in online play. These abilities aren't extremely powerful, and they actually reset if you choose to disable online play and prevent others from invading your Watch Dogs experience. For those that do want to play online - but you happen to lose access to PSN/XBL, Ubisoft servers, or the Internet, rest easy as your notoriety unlock progress does not reset.

All of this hacking makes the GUI of Watch Dogs look rather busy. In addition to the usual visual effects, the actual intractable objects in the world often clash together, along with the NPC profiler, any incoming messages or audio logs, and so forth. It's actually best to keep your smartphone away when on foot, as the interface becomes far too cluttered. When driving however, your hacking abilities will be automatically ready regardless if you have your phone out.

Your phone also doubles as a useful tool that replaces the menus, containing all info, quickly access your progress tracking, or request a car be delivered. The latter is quick and useful because vehicles spawn nearby instantly, instead of having to wait like in other open world titles. It can also let you play music while travelling on foot - and depending on how many tracks you've found and unlocked, the selection of tunes is rather varied. There are no radio stations, and the song selection tries to hit every major genre but that ultimately means it's just a random tracklist with no personality. Elsewhere in audio design, the sound effects in Watch Dogs are serviceable, from satisfyingly loud gunfire and explosions to uneven volume mix of NPC dialog. The voice acting of the main characters is hit and miss, with Aiden lacking an interesting personality, though at least the writing is actually good enough to support the serious tones of the narrative. 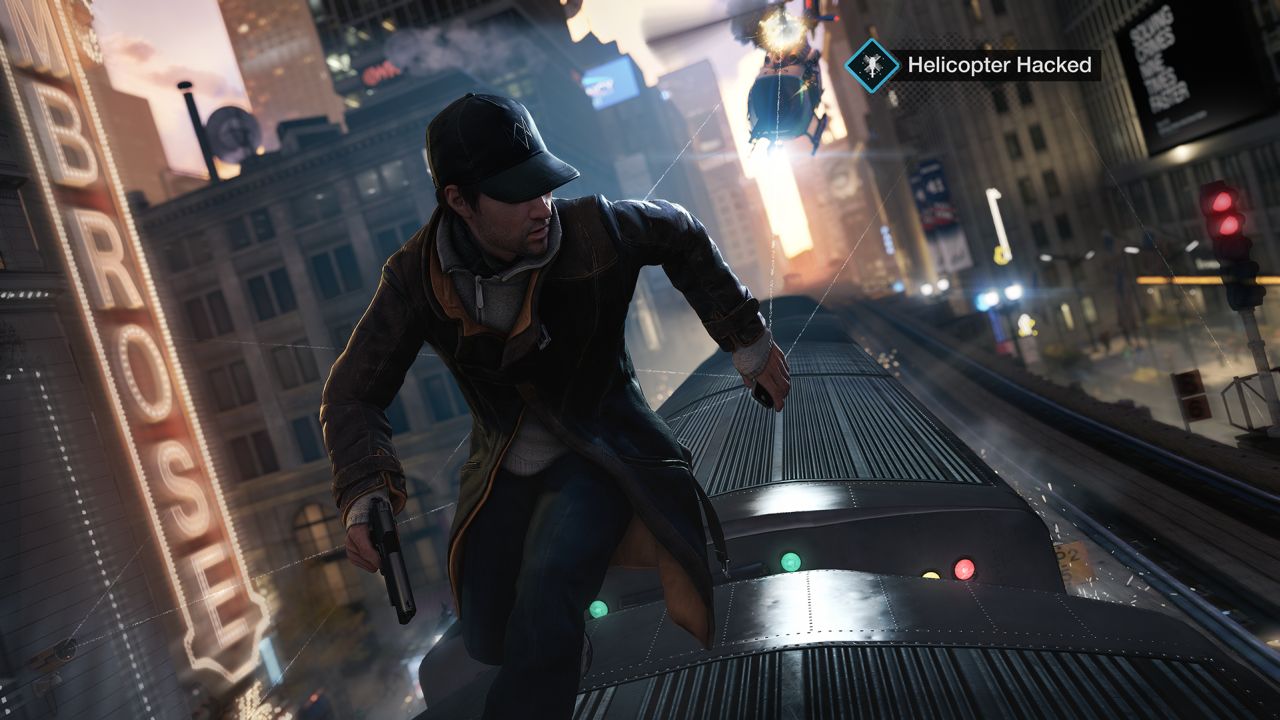 Visually, Watch Dogs is not the best looking PlayStation 4 title, but it's more than acceptable. The lighting effects are the standout feature, with everything from the sun to the corner street light adding to the atmosphere of Chicago. The textures are high resolution, but are often flat, a clear indication that the game was also created for older generation of consoles. Animations are smooth in action, but cutscenes reveal stiff characters and basic facial animations. There's also a lack of Anti-Aliasing visible around most objects in the game, from cars to characters, sometimes creating an awkward white outline.

And perhaps most notably, the game sometimes stutters, with the framerate dipping when the game is saving or loading. Thankfully, these occurrences are rare and never in the heated chases or shootouts. There are occasional sound overlap issues, and a few cutscenes were humorously missing a character model, making Aiden talk with himself. When playing online, there is a little bit of lag as well, however it only affects the avatars of other players and not the game world. Good for racing, so you can keep your wheels pointed the right way, but not so great when trying to shoot others.

Watch Dogs may not be the ultra-slick, revolutionary vision that everyone got excited about in 2012. It is still, however, a great open world stealth action title with lots of mission variety, and a ton of things to do. The level of environment interactivity gained through hacking is unmatched, and offers a lot of ways to approach any situation. The city of Chicago is alive, with personal lives of its citizens at your fingertips. Multiplayer modes further boost Ubisoft's ability to create nerve-wracking, cat and mouse encounters. The game looks and sounds solid on the PlayStation 4, through it takes no unique advantages of the system or the DualShock 4. If you're looking for a new futuristic setting and an open world to get lost in, Watch Dogs already knows where you live.

Prev12
Our ratings for Watch Dogs on PlayStation 4 out of 100 (Ratings FAQ)
Presentation
80
Chicago is full of detail as the sights and sounds of the big city serve as an atmospheric backdrop to the chaos. The user interface can get a bit too overloaded with effects.
Gameplay
86
Hacking serves as the centerpiece of the experience, and it carries the weight of the game on its shoulders with ease. The action is challenging, stealth offers a myriad of options, and even the AI performs admirably. Driving should have been better.
Single Player
88
While it starts slow, the main missions in Watch Dogs eventually become rather engrossing. There is a wealth of side content that will easily last tens of hours.
Multiplayer
81
Invasions help the game feel truly connected, as Ubisoft shows its expertise at designing one on one showdowns of stealth and evasion. A few other standard online modes also function well.
Performance
76
Occasional framerate dips, some lag online, and a few bugs.
Overall
83
Watch Dogs refines stealth action in an interconnected open world that's worth exploring.