A fun concept and often times a great game

Often times, video games that tap into the veins of the retro-enthusiast take simple gameplay mechanics, make them devilishly addictive, and let nostalgia wash over players as they vigorously consume the content. Conventions such a such 2D worlds vs 3D worlds, or the manipulation of time have previously been toyed with, but the core of these games often attempt to keep things simple in order for players of varying ages and skill to connect to the days of two buttons controls schemes and pixelated worlds. Super Time Force is looking to do none of that. The side-scrolling, arcade-action shooter from Capybara Games is all about chaos and creating strategies on-the-fly. While Super Time Force is not an intensely difficult game, it revels in confusion and insanity. This isn’t a quiet walk down memory lane, as the game is actively trying to recreate the frustration, energy, and silliness of titles you’d play after watching Saturday Morning cartoons.

Super Time Force does not spend a lot of time taking itself - or its plot - seriously, but the core concept of the plot is the crux of the gameplay. Dr. Repeatski is a scientist working on the science of traveling through time and manipulating the space-time continuum. While working on the project, Repeatski is visited by a future version of himself, known as Colonel Repeatski. The future version of Repeatski tells his past self the world is about to be invaded by Blounbots, robotic attackers which threaten all of Earth. In order to stop the villains, the Colonel has brought along his Super Time Force to save the world. 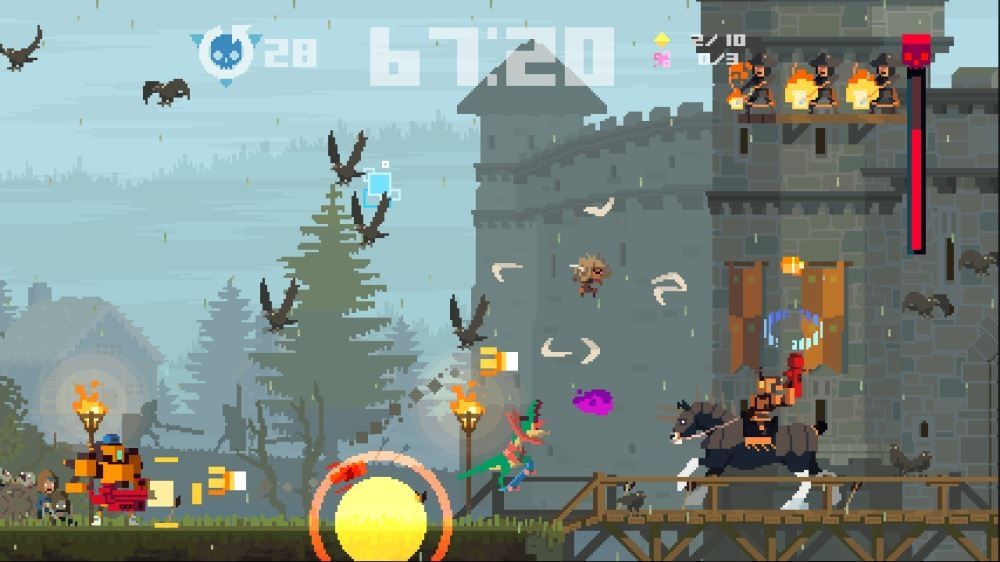 The tone of Super Time Force is entirely tongue-and-cheek humor and painfully self-aware. Playable character range from a dolphin named Dolphin Lundgrin to a bandanna wearing rocket-launcher specialist who played in a band with Repeatski named Jef Leppard. After saving the world from the Blounbots - which happens before early in the game - Repeatski takes his Super Time Force sightseeing through time, messing things up all along the way in his own self-interest. Aside from Repeatski’s annoying use of internet lingo - there’s a lot of “LOL”s and “kthnxbye”s - and the creative character names, the humor of Super Time Force doesn’t penetrate beyond the game’s skin. It’s cute and occasionally funny, but that’s not what the game is really all about.

What Super Time Force is really about - as Repeatski will tell you multiple times - is blowing things up. It would be a rather boring and frustrating affair, if not for the game’s time travel mechanic. Previous games such as the Prince of Persia series or Braid allowed for the rewinding of time, but after you rewind the clock in Super Time Force your original character will still be present, repeating the actions you originally did until you either rewound time or the character died. So dying and rewinding time ten times on certain section will create ten copies of the available characters, each running around following their own actions while you try and suss out the mess. Yes, it is exactly as ridiculous and chaotic as it sounds. 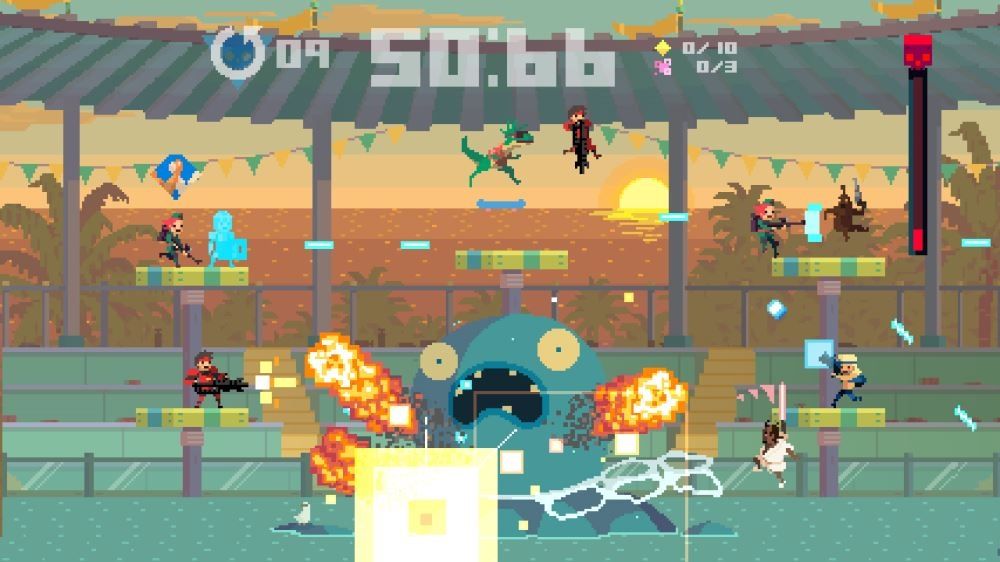 It would be easy to write off Super Time Force’s time-and-death idea as a gimmick, but the game finds interesting ways to apply these mechanics. Each level gives players 60 seconds to complete it, and while they are all pretty short, none of them are actually meant to be completed in that amount of time. Scattered throughout the level are various items to help you in the fight. 10 second power ups extend the clock; glorbs are little golden collectibles which earn you another chance to rewind time (you are limited to 30 rewinds before failing the mission); purple pixels can be collected to enter bullet time; and special Looker/Watcher pixels can be collected to communicate to a strange alien race. You will need to grab most of these collectibles to succeed within the 60 second window of a level.

The collectibles are well and good, but using “Time Outs” is really the key to victory. When you die or hit the “B” button, time will rewind and you will get an opportunity to start from anywhere you have already traveled in the level and start again, either with a new characters from your roster or the same. This most often is used to multiply the damage you are doing. If a door is in your way and you spend 10 seconds shooting it down with one character, you can reverse time and add second character to cut the time down to 5 seconds, reverse again and add a third character to make 2.5 seconds, and so on. This also plays a large factor in boss battles. No matter your skill, it may take much longer than 60 seconds to deal the needed damage to a boss. However, once you have added in 10 or 15 more copies of the available characters, all firing away at the same enemy, 60 seconds becomes far more manageable. 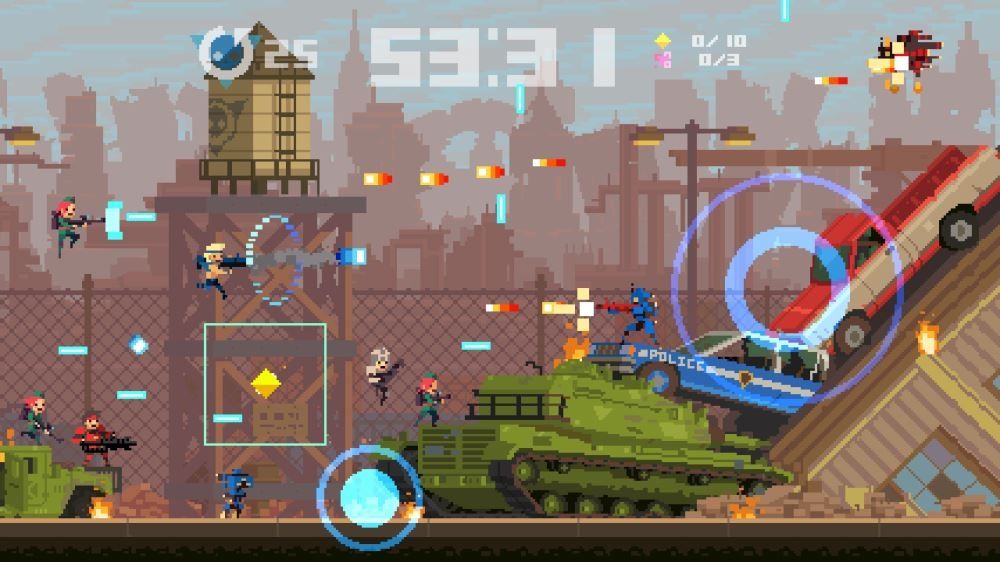 Super Time Force’s ideas are initially fun and well implemented, but it does not always create levels to best challenge the mechanic. After completing the opening mission, the game gives you five different levels to choose from, ranging from a flying-car future to the age of the dinosaurs. The problem with this selection screen is that the game struggles to ramp up its difficulty. While I was challenged a bit on the first level, especially during a jet-pack joyride through heaven, I cruised through the last few levels as my understanding of the game improved. There’s a lack of progression in Super Time Force, which leaves some of the levels in the latter half of the game feeling hollow. From time to time Capybara Games will throw something truly difficult and challenging at you, making you seriously consider how you are using your time outs, and these were some of my favorite moments with the game. The last two levels are perfect examples of desperately racing against the clock and having to think on your feet. After completion, each mission features replays in real time, allowing you to watch your characters multiply and attack the level en mass. It is a rewarding treat at the end of each level, but it is most appreciated when you have just scraped through a fight after using all of your time outs and almost all of your time.

The character selection of Super Time Force is charming in name, but the game fails to support the choices offered. There are over a dozen characters available, but I found myself often rolling with the same three or four consistently. Sheildy Blockerson, a character who uses a shield for combat, is a perfect example of character I was often tossing to the wayside in favor of characters who could amplify my damage. The concept of Shieldy is smart, and one would think it would be helpful to have his ghost protecting other characters, but it often is unnecessary and my attempts to use the character felt worthless. There are about six characters you will accrue through the game naturally - the others being hidden in levels or earned through achievements. These core six characters are really all that is necessary, the others are merely set dressing. There are definitely differences character to character, but there are few times when you can find sections of the game tailored to one specific character's strengths. 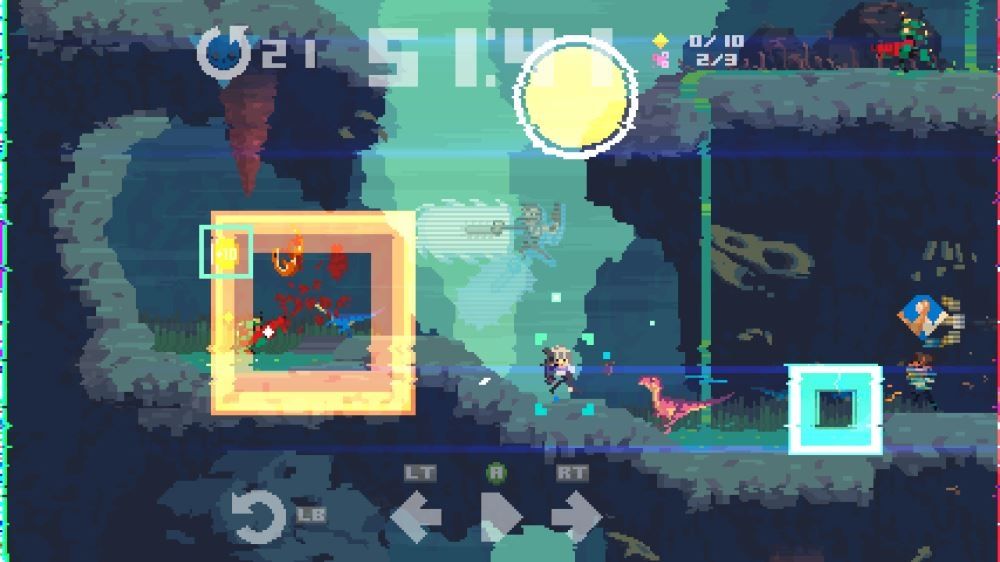 Super Time Force is a straightforward affair, uninterested in the bells and whistles of gaming in 2014. Although the game is an Xbox exclusive, there no support for the Kinect peripheral. The game only boasts a total of seven shorts levels, but does contain leaderboards so friends can compete for high scores. This no-nonsense attitude also comes through in the game’s pixel art aesthetic, which is charming and serviceable. Traveling through time offers a nice visual variety level to level and each world has its own flavor, such as the Mad Max-esque future or the city of giant water-park world of Atlantis. The chiptune soundtrack, the pixel-art look, they are all appreciated, but do nothing to stand out from other walks down the same road. The simplicity equals to smooth technical performance as the game has no issues to speak of.

Super Time Force is a fun concept and often times it's a great game. There’s a honeymoon period in the early levels where watching a sea of your characters battling through foes is rewarding and entertaining. While the game starts strong, the latter half of the six hour playthrough starts to drag. After you have beaten the game, Super Time Force encourages you to go back through and attempt to finish collecting everything it has to offer. This definitely provides some replay value to fans who are into hunting collectibles and earning achievements, and it can add some challenge the game’s latter sections lack. But the mechanics aren’t addicting enough to warrant a second time through, or a third, or however many times it takes earn your gamerpoints. Super Time Force is good fun, but it begs to be fleshed out, with better progression and more instances tailor-made for the game’s ridiculousness.

Our ratings for Super Time Force on Xbox One out of 100 (Ratings FAQ)
Presentation
73
The pixel art world offers variety and creativity, but it really doesn’t do anything to break the mold. The game is playing the nostalgia card, but feels like it is retreading old ground.
Gameplay
81
The game comes at your fast and furious. Collectibles, a timer, cheap enemies, there are plenty of things thrown at you, but unfortunately it all feels a bit generic. I never felt like I needed to rethink my strategies or choice of characters being used.
Single Player
74
The early levels offer a challenge as you wrap your head around the mechanics and the game’s last two levels are designed to leave you white-knuckled, but the middle lags in pace. The game also failed to hook me enough for a second playthough, which makes for a short 6 hour affair.
Multiplayer
NR
None
Performance
80
There’s no bells or whistles to Super Time Force, which makes for a solid technical experience.
Overall
77
Super Time Force relies heavily on the chaos of its time-and-death mechanic to keep the players moving. The game doesn’t always strike the sweet spot and stand out, but it did always leave me smiling as I would watch the replay of a level and all my characters swarming through, firing waves of bullets. For those who love are looking for an action-arcade shooter with a neat hook, Super Time Force offers a fair share of fun. 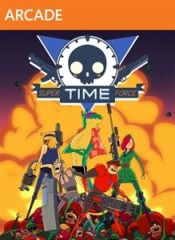