Those hoping for a meaty fantasy-RPG will be sorely disappointed

Spiders Games is no stranger to making fantasy worlds. The studio previously developed Of Orcs and Men and Faery: Legends of Avalon, and while those games were not considered roaring successes, each showed promise and left a glimmer of hope Spiders Games would be able to deliver a more cohesive and refined experience in the future. Unfortunately, the studio’s new release, Bound by Flame, is more lateral movement instead of progression. The game isn’t unplayable, but it is so rough around the edges and so unimaginative in its narrative that it fails to provide any reward or satisfaction.

Bound by Flame attempts to tap into the action-RPG genre which has risen to so much popularity in recent years by offering a couple of standard genre elements. There is a simple character creation system, providing the options of gender, face, hairstyle, and name (although the character is called “Vulcan” in the dialogue no matter what you select). There is a party system which allows you to choose a character to accompany you on a quest, but they rarely contribute as anything more than a meat-shield. There are dialogue options and game-changing decisions, but the characters are boring and the choices are part of a standard “insert character ‘A’ or ‘B’ here” story roulette. These elements allow for some minor feeling of control over your game, some sense of ownership, but it hardly makes Bound by Flame feel dynamic or unique. 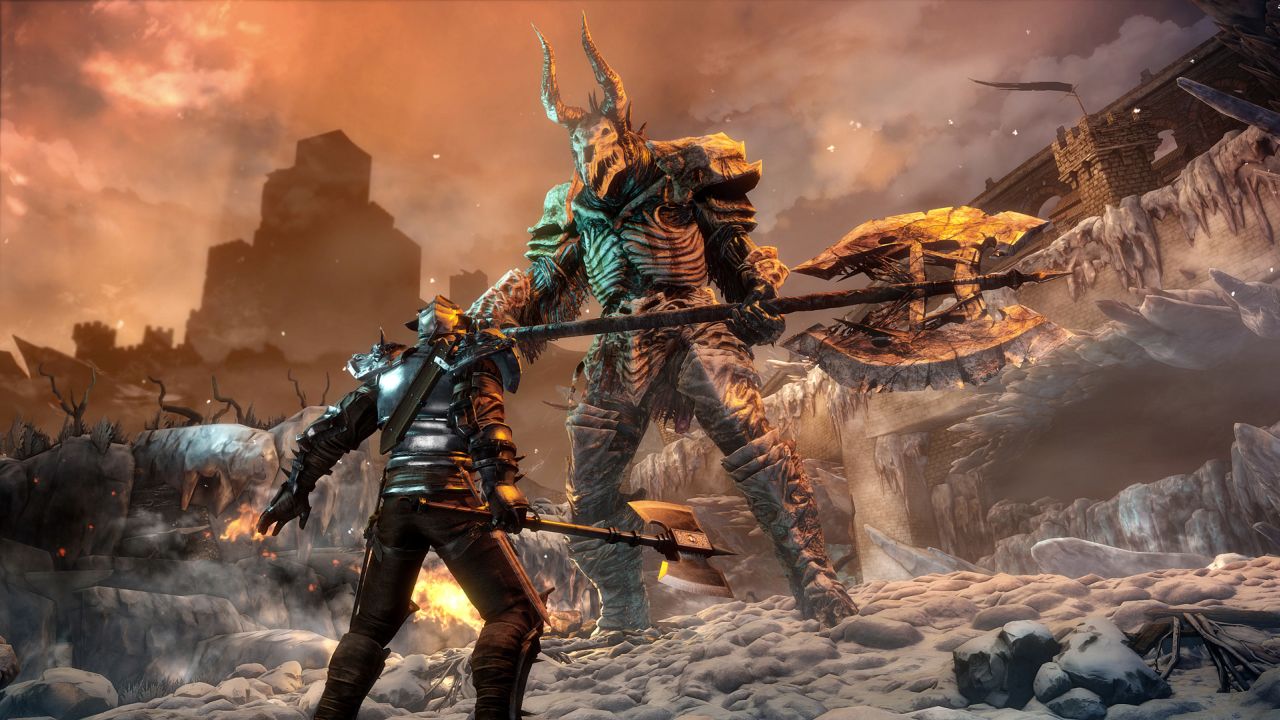 Once you have created a character you are thrust into the first of many lengthy cinematics. Bound by Flame has a story to tell and while you can skip through it, so much content is tied to the main plot you would be gutting the experience. The problem is, while the story itself is already mediocre - brimming with clichés and retreaded ideas - it is delivered horribly. The cinematics look worse than the game play, characters move rigidly, dialogue doesn’t sync up with the animations, and the voice-acting sounds on-par to you might find from a local community theatre. Important information can be delivered during these cutscenes or one of the numerous, lengthy in-game conversations, so the game holds you captive for these scenes, but my thumb often lingered on the “skip” button, begging to spring into action.

The plot of the game hinges on the main character ending up in the middle of a special ceremony which binds him/her with a fire demon. Like so many gritty, fantasy tales these days, Bound by Flame features a world filled with dangers. A massive evil is tearing through the continent and is threatening to wipe out the kingdoms of elves and men. Vulcan’s melding with this unnamed fire demon grants him special abilities needed to turn the tides of the war. Thus, you run through three acts, totaling about 20 hours in length, saving everyone who needs saving. 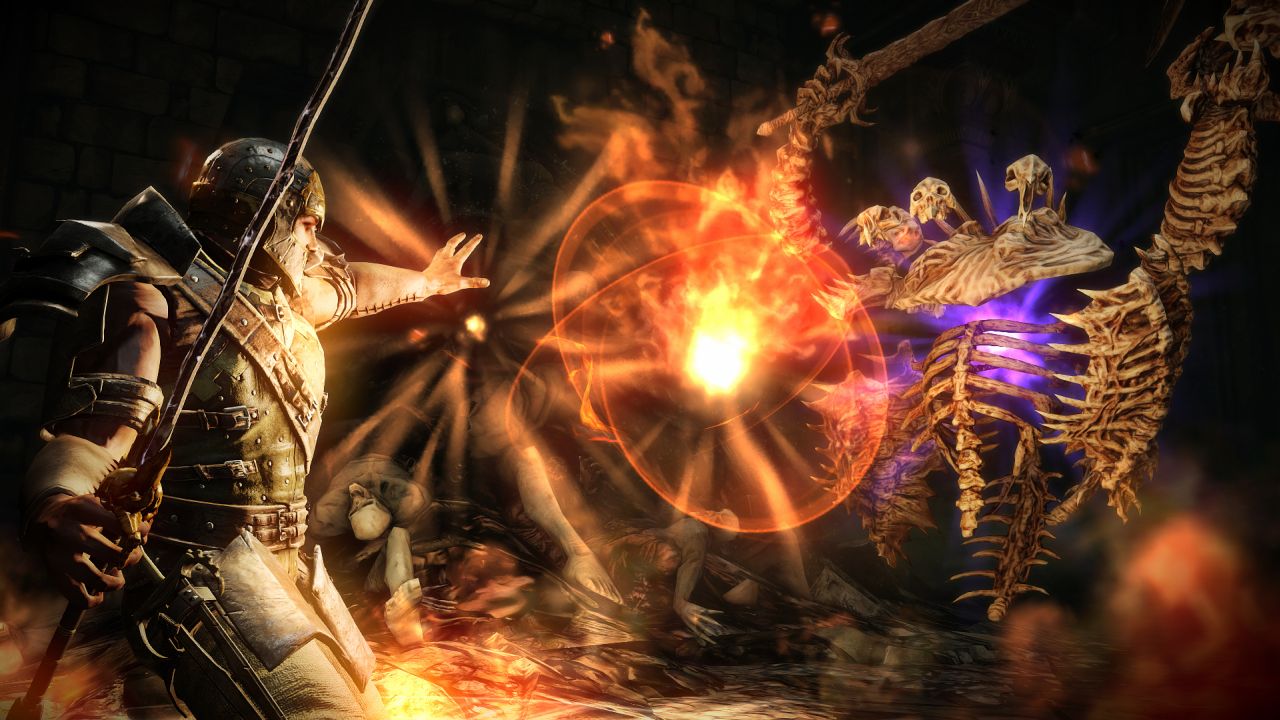 Bad stories which are poorly executed are not unique to video games and the narrative does not single-handedly ruin Bound by Flame. The game gets equal help from its unpolished gameplay. Bound by Flame attempts to build a combat system with great depth and challenge. Enemies are nasty beasts who can crush your life with a single blow or leave you sprawled out on the ground, waiting to be put out of your misery. Riffing off of other experiences of this nature (see: The Witcher and Dark Souls), it can be hard at times to tell how much of Bound by Flame is designed to be difficult and how much is just poor design. Nonetheless, time to time the game threatens to be an enriching challenge, filled with difficult battles which still feel rewarding to progress through. While initially taken aback by the intensity, I soon found myself getting into the punishing nature of the gameplay, until eventually I would hit part of the game which felt unfairly constructed. My AI cohort would fall in second, enemies would surround me and the game’s controls would lack the sophistication needed to accommodate the challenge presented.

Having punishing enemies is not a poor decision on its own, but the game doesn’t give you much to protect yourself. Bound by Flame provides two combat stances; the two-handed weapon stance of the warrior or the quick-strike dagger approach of the ranger. The warrior uses their large two-handed weapon to block enemy attacks, but what can/will be blocked is difficult to decipher. The enemy AI is nothing scoff at, and often I found myself surrounded, getting pelted from every angle, and dead within a few seconds. The ranger stance hinges on dodging backwards out of the way. This is a bit more functional and the game is often forgiving about the dodge as long as the timing is right - which can be a frustrating experiment. The drawback to the dodge is its rigid nature which only allowed me to go backward. There’s no rolling to the side or ducking beneath an attack, you have to skip backwards from whatever enemy you are targeting. When surrounded by enemies this can be a sticky system; I often thought I would dodge one direction, but the auto-targeting would send me another. You can try to control your targeting system manually, but if you do this you must leave the camera static or you will change the target. I often found myself stuck in a corner, jamming the dodge button while three enemies wailed away at me, leaving no chance to attack. To make matters worse, one bad strike from an enemy could leave you sprawling on the ground; when this happens it takes so long to get back up you’re bound to take a second hit which you can do nothing to avoid. These dodge and block controls should be the focal point of a truly challenging game like the one Spiders is attempting to make, but instead they are sticky and poorly crafted, breaking the core principle of design. If the game felt fair, the challenge would be a true treat, but instead I felt like death consistently cheated me instead of the other way around. 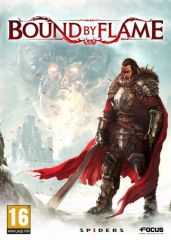 All videos for Bound by Flame (3)
Advertisement ▼