For years, Bethesda Game Studios have been creating experiences that stole players away to the magical world of Tamriel, providing exciting tours through the nations of Morrowind, Cyrodiil, and Skyrim. Each of the previous single-player experiences have been well-received by critics and players alike, creating a passionate community, and reaching its zenith after their most recent release, Skyrim. So when Bethesda announced they would be creating an Elder Scrolls MMORPG, expectations were instantly high. Now the final product is out, and while the game strives to nestle itself in the long-standing tradition of Elder Scrolls games, some late-game balance issues and technical concerns prevent The Elder Scrolls Online from being as engaging as its single-player counterparts.

After booting up the MMO, the first thing you will prompted to do is create a character. The creation system is actually one of the game's best qualities, as players are offered all the customization options one would expect from the series. You can tweak the facial structure, determine their demeanor, and alter the thickness of a character’s thighs. It is a decent amount of options, given the only time you see your character in this much detail is in the inventory screen. 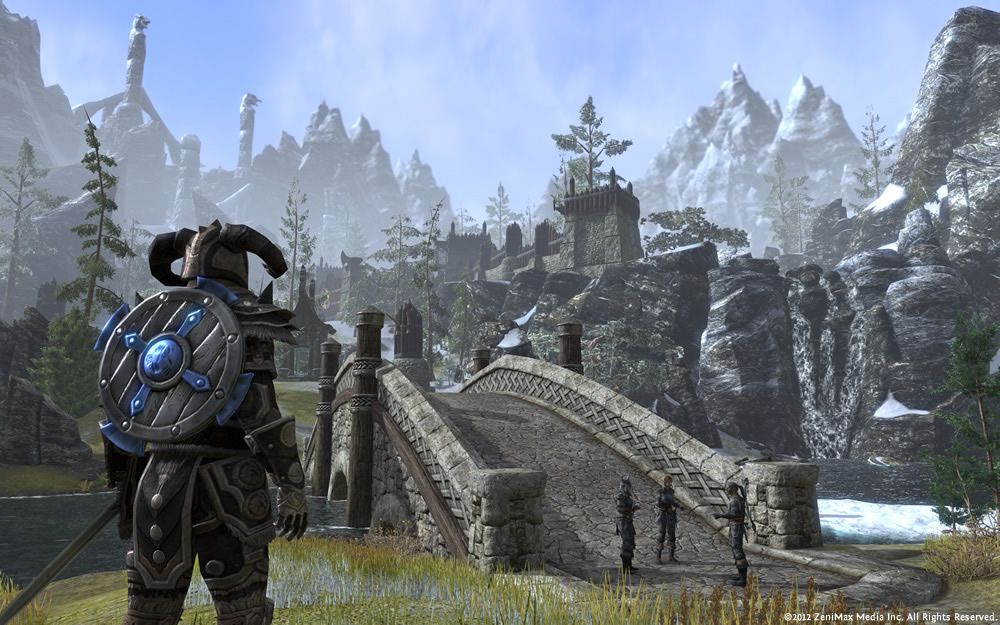 While the look of your character is, in the end, superfluous, picking a faction to join is one of the most important decisions during creation. Each faction has their own territory to adventure through, determined by the nations which make up the faction. Joining the faction of the Ebonheart Pact - made up of Skyrim, Morrowind, and Black Marsh - means you will be journeying through those respective nations and engaging in storylines specific to those areas. As I spent significant time in all faction areas, time spent in places not yet explored in the single player games, like the wild jungles of the southern elves, more special. Picking a faction also determines which race you can play as, that's also further restricted to the member-nations of each faction.

Once you have picked out the perfect mole, selected the right tenor of voice, and chosen a side in the war for Tamriel, you are dropped into the world of Coldharbour, a realm of Oblivion. The first quest instantly demonstrates the biggest difference between previous Elder Scrolls games and Elder Scrolls Online. As soon as you wake up and escape your cell, you see dozens of other players doing the same thing. It looks like the jailbreak from hell as a smattering of other players join your escape through the dungeons of Molag Bal, battling the demonic forces of the Daedric Prince. There are parts of Elder Scrolls Online where you will find some peace and solitude, but any time you come to a dungeon or quest-necessary area, you will find a handful of players running around and fulfilling the same objectives as yourself.

The volume of player characters becomes instantly problematic as Elder Scrolls Online spends so much time telling how important you are to the world. The stories which fill the world of Tamriel feature some of the best writing the Elder Scrolls universe has ever seen. Adding to the quality of the narrative is the impressive voice casting the Elder Scrolls has become known for, featuring the talents of Jennifer Hale, Michael Gambon, Alfred Molina, and John Cleese. It is hard to find parts of Tamriel which are completely secluded, but it doesn’t always take away from the experience. As you wander the incredibly expansive world Zenimax has created, you will find plenty of time to enjoy the gorgeous soundtrack, listen to the ambient noise of wildlife, and drink in the game’s stunning vistas. Having sampled the realms of the Aldmeri Dominion, the Daggerfall Covenant, and the Ebonheart Pact, let me assure you that each one is drop-dead stunning in its own way. Elder Scrolls Online might lose some of its detail in character models, but the landscapes themselves look as gorgeous as they ever have. 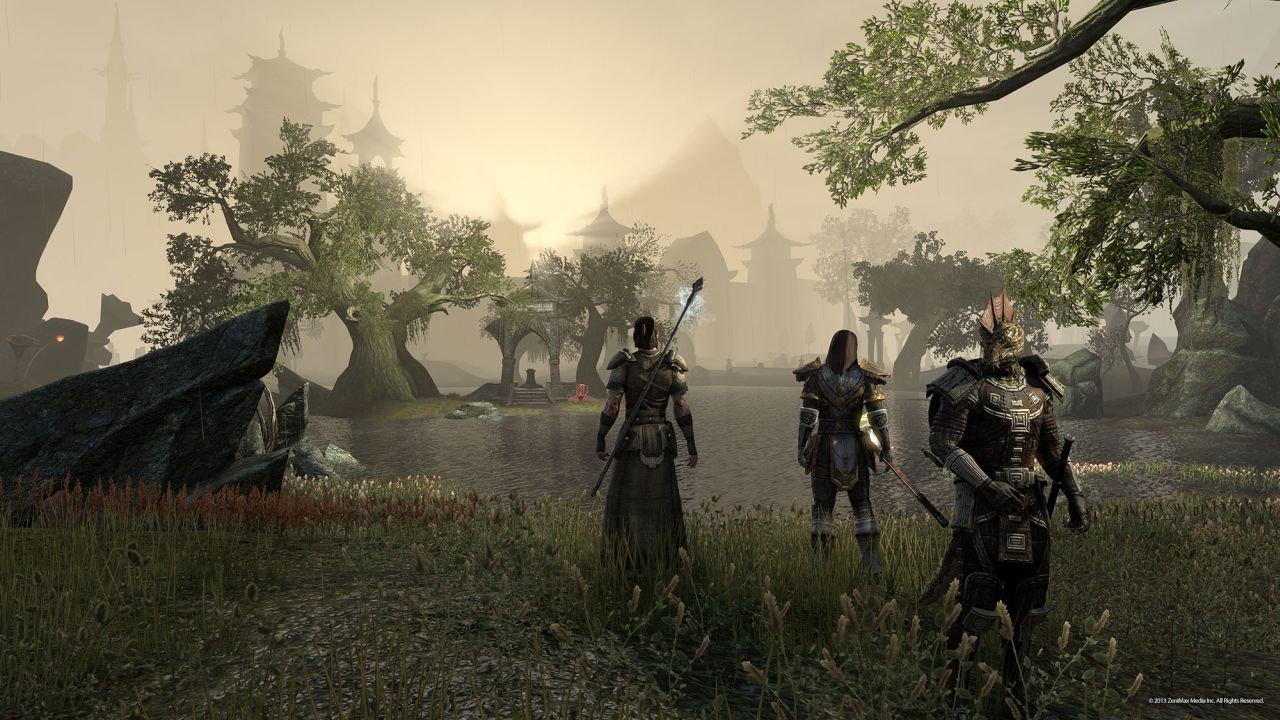 As good as the narrative aspects may be, it still feels weird to have so many people saying, “You are the only one who can help me”. Then you show up to slay the monster or save the helpless only to find several other people doing the same thing. Such is the nature of MMORPGs, but it feels specifically weird in a series which has so long predicated itself on creating immersive, lone-wolf experiences. Because of this, you better come with an open mind about playing with others.

At times the game is specifically crafted for groups of players to adventure together, however at certain intervals the dynamic shifts and you are forced to endure difficult bosses on your own. For instance, after completing the first section of the Fighter’s Guild quest with a friend, the end boss forced us to fight separately. There’s no rhyme or reason why this boss requires you to fight alone, and while we rolled the first part of the quest working together, alone the boss was ruthlessly frustrating. Another time, I found myself in a difficult dungeon but had a couple of strangers help me through. Once again, when I reached the end-boss, I was required to fight alone, though the rest of the dungeon was a team affair. There was no completing this quest - which was indicated to be in my level - until I had significantly leveled-up and backtracked. It makes one wonder why a quest can only partially be completed as a group, or why isn’t it better indicated what content will force a single player experience. It also makes you think a quest will be easy to get through with company, only to suddenly throw a difficult battle at the end.

The difficulty spikes are a recurring annoyance in The Elder Scrolls Online. The bigger problem is that the difficulty of a quest is not well communicated. When given a quest, it will be coded in a color to indicate if you are of the proper level to complete it. Orange will indicate a quest you are not skilled for, yellow means it is in your range, green means it is below your level, and grey indicates it is far beneath you. While the color codes are nice, they are wildly inconsistent. Some yellow quests I completed without issue, while others marked as within my level were incredibly difficult. Sometimes it seems like quests are coded with the assumption you will be taking them on with a group, but again there is nothing truly indicating this. Because these spikes in difficulty are not well-communicated they feel random and misleading. There's nothing more frustrating than journeying across half of the map to reach a quest you are hopelessly under-qualified for. 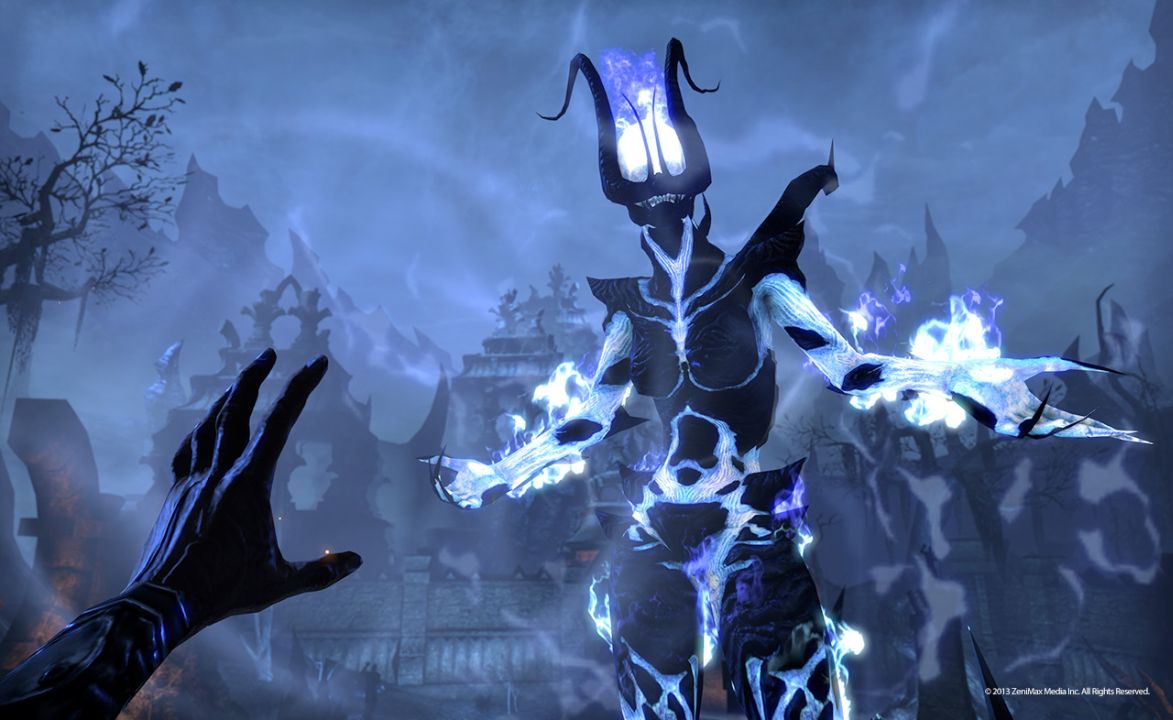 The difficulty will cause you to re-evaluate the character you have created and how you have specialized them. The Elder Scrolls Online has four different classes - Templar, Dragon Knight, Nightblade, and Sorcerer - but they are not as cookie cutter as they may appear. You can make your Nightblade a healer or your Templar a tank. The game allows you to toy with class, weapon, and focus with as much freedom as you desire. It is liberating at first, but failing to do your research can leave you with a character unfit for the late-game content. Seeking some help and re-speccing your character is something you will likely find yourself doing before long. Those looking to experiment, sample, and number-crunch will thoroughly enjoy the depth the leveling has to offer, but it threatens to be a little much for anyone not willing to fully commit themselves to the game.