Easily one of the best Star Wars games for the PC. Top quality visuals and sound provide a great gaming experience.

Jedi Outcast is a sequel to Dark Forces II. You reassume the role of Kyle Katarn, the mercenary working for the New Republic. Kyle Katarn and Jan Ors go on a mission to investigate an abandoned Imperial outpost on Kejim, but it turns out that the outpost is not abandoned, and they discover an operation involving lightsaber crystals. Two dark Jedi known as Desann and Tavion are behind the operation. The story then starts to unfold and will eventually lead to Kyle traveling to the Valley of the Jedi to regain his force powers to defeat the dark Jedi.

Raven, who developed the popular shooter Soldier of Fortune, were given the task of creating this game, and they did a great job. The game is divided into two parts. In the first part, Kyle Katarn is a mercenary, who has relinquished his force powers, and therefore uses projectile weapons to attack enemies and it is played in the first person mode. The second part begins when Kyle returns to the Valley of the Jedi to regain his force powers to fight the dark Jedi and gets his lightsaber; from then on, the game is played in third person mode whenever the lightsaber is used.

Although the focus of the game is on the lightsaber combat and the use of the Force powers, both parts of the game are equally good. I am happy to say that I am not disappointed with either. The weapons are varied and handle quite well. Once the Force powers are attained, the game changes and I found myself using the lightsaber a lot more than the other weapons. The force powers give the ability to control the minds of some of the weaker enemies, the force pull and push, force grip, force lightening, force jump and the ability to slow time. As you keep going further into the game, the strength of your force powers increases as well, and you will eventually turn into a master Jedi who can kill a number of storm troopers in swift motion using the force pull or the push.

I thought the Force powers work brilliantly. It was a lot of fun to use the powers against a group of storm troopers who do not stand a semblance of chance against you. The lightsaber can deflect blaster fire, just like in the movies. However, it is not going to be easy against some of the tougher enemies who use the Force as well. It takes some doing to defeat them, and you will discover that even as a Jedi, you are not an invincible warrior; so there is a lot of balance in the combat.

The game is not all about using guns, lightsaber, or the Force powers. There are plenty of puzzles to solve as well, sometimes they can be quite difficult, and that provides a bit of a break from the combat. Some may like it and others may not. I have played many puzzle-based games over the years and I did not have any problem with that. It was a welcome change for me.

The atmosphere is beautiful and you will have a definite sense of déjà vu if you have seen the movies. The game uses a heavily modified Quake 3 engine with double polygon count, and it shows. It looks fantastic. All the cities, jungles, Jedi temples etc. are very well created and retain the feel of Star Wars.

You cannot mention a Star Wars game without talking about the audio. I thought the audio in this game was top notch. The soundtrack from the movies is used throughout the game and the voice acting is excellent. The sound along with the visuals capture the Star Wars universe and the fans are going to love it. I know I did.

If some of the flaws of the game have to mentioned, it must be the complete linear gameplay. You do not have the ability to choose the powers that you want to upgrade or the path you intend to follow. The game does this for you. This in a way hinders your experience a little bit. Although this game has the makings of a very good RPG, those elements are not carried out.

In spite of that little shortcoming, this remains one of the best games I have ever played. Given the special appearances by Luke Skywalker and Lando Calrissian, it makes the experience a lot memorable. I tried hard not to say this, but the Force is strong with this one.

Our ratings for Jedi Knight II: Jedi Outcast on PC out of 100 (Ratings FAQ)
Presentation
86
Great visuals and style, great audio design
Gameplay
85
Becoming a Jedi has never been so fun
Single Player
90
A lengthy campaign with story full of Star Wars details
Multiplayer
78
Some interesting modes but not much to hold your attention
Performance
88
Runs well on a wide range of hardware
Overall
84
Jedi Knight II: Jedi Outcast has a great presentation, force powers are a lot of fun, wide variety of weapons, and excellent level design. 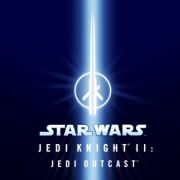