Become a sports champion, just don't trip over the Kinect

It has been over 3 years since the debut of the original Kinect for the Xbox 360. While this voice and motion tracking device from Microsoft has seen various integrations in a range of titles, the sports genre was always a well suited application. From launch title Kinect Adventures to Kinect Sports, to more exercise-focused entries like Kinect Nike Training, the device has kept many players active. With the launch of Kinect 2.0 alongside the Xbox One, Microsoft once again aims to get players moving with the help of Rare Ltd and Kinect Sports Rivals.

As expected from a first-party title that aims to utilize the Kinect peripheral to the fullest, Rivals allows players to navigate the Island Map with gestures or voice commands. The island represents the game's main menu and nicely outlines all activities that are available. Both the motion and voice controls function well and can be used to swiftly navigate to the desired menu. If you're feeling lazy, a controller can still be used as well. 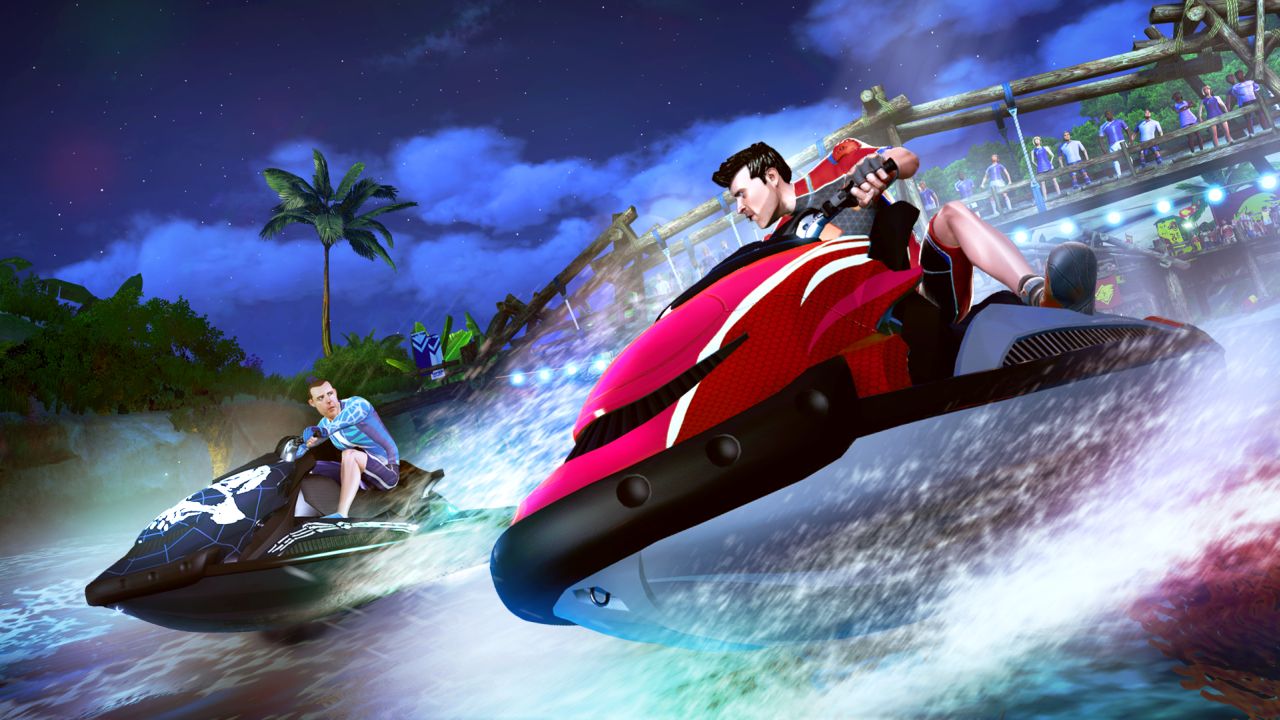 You begin by creating your Champion avatar. Unlike most games, you don't use a pre-made persona or spend an unnecessary hour fiddling with the details. Instead, the game guides you through a scanning process where your body and face is scanned by Kinect into the game. The results are satisfying - your Champion will indeed look a lot like you, even determining your correct body type and some facial features. We've tried the process with a few players and the results were always accurate enough to satisfy and not require much further fiddling. It's a cool feature, and one that ensures your Champion has a unique look, at least in the local player pool. You'll run into many avatars that look strikingly similar as you venture online, but at least it's a cool process to go through. You can always customize features such as hair, eyes, and body type or even restart the scanning process if you're unhappy.

Once you're ready, the real competition begins. You're introduced to each of the six sports in Rivals via a series of tutorials, hosted by the amusing Coach (voiced by William Hope of Aliens). These cutscenes show off the three teams that compete in each event, namely the Eagle Legion, Wolf Clan, and Viper Network. The members of each of these teams are forgettable (and in case of Viper, annoying) stereotypical characters, that attempt to give the game some personality. Following the tutorials, you'll play through a few team story events as a career mode of sorts. These story events are few in number and only act as incentive to run the players through each sport a few times. After that, you can actually choose what team you want to represent, and it feeds into a bigger meta-game of trying to lead your team to dominate all the sports on the island. 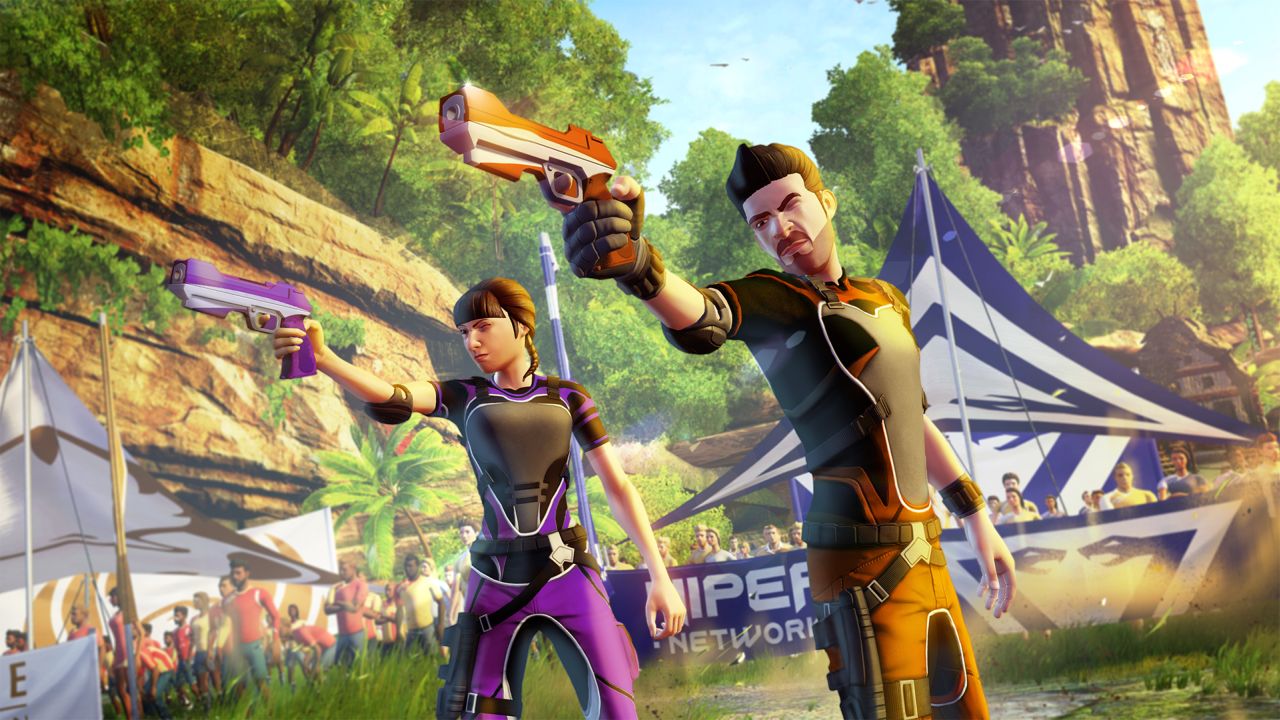 But let's talk about the meat of the game: the six sporting activities. First up is Wake Racing, where places take on one of 5 circuits of varying difficulty. The gameplay consists of holding your hands in front, and steering by moving one of your hands closer to your body in a horizontal line. Your right fist must remain closed to keep the throttle down, and for sharp turns you must also lean your body in the desired direction. It's a bit awkward to get used to, given that most players will be familiar with a steering wheel configuration of up/down instead of forwards/backwards. But, the controls are responsive enough that they don't get in the way of the fun once you're familiar with the setup.

Each sports game has a set of 3 functionally similar power-ups, one for speed, one for attack, and one for defense. They have different methods of being charged up, and can be executed with motion or voice. In wake racing they are Force Shield, Speed Boost, and Mine Drop. Players that want to win will likely stick to the speed buff, as the others are too situational, and the tracks already have plenty of obstacles and mines to crash into for the lesser skilled drivers. To earn the power-up, players will need to perform tricks from ramps or particularly large waves. Aside from occasionally getting stuck in the environment, and the game taking too long to reset you back, wake racing is an enjoyable introduction to Rivals with good controls and balanced mechanics.

Next up is Climbing, where players use their hands to climb a variety of horizontal surfaces at six different locales. Using your hands just like you would in a real situation, players grab air above them and pull their hands down in an alternating manner. You occasionally have to jump, or scale sideways. The Kinect tracks your hands well, though too often the next ledge is closer than your fully outstretched hand, so you must fiddle and move your hand around until it's suitably positioned. This wastes valuable time, as does an odd mandatory resting period to recover your Champion's stamina, lest you want to fall off. 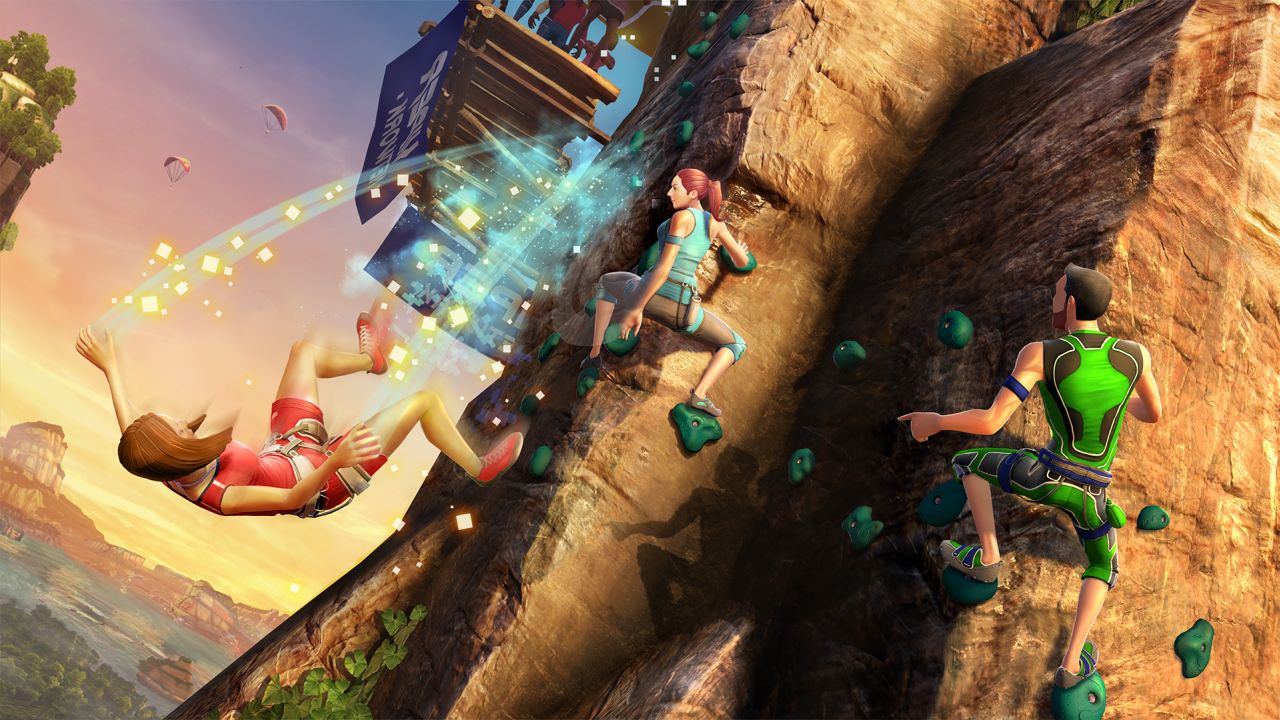 To make your experience more interactive, players can actually grab the competition and throw them off, which can be avoided if you keep your distance. There are also unstable ledges that crumble, shock you, and gusts of wind that can ruin your day. If you do fall off though, like in wake racing you simply restart from the same spot, though have lost valuable time. The three power-ups in climbing are shock shield, super jump, and blast wave. Unlike wake racing, players might actually want to experiment with which ability works best for their strategy. Do you protect your own ascent with a shield, or try to harass others with the blast wave? Climbing offers an enjoyable balance between fun and exercise that works well if the Kinect tracking cooperates.

With Target Shooting, Kinect Sports Rivals misses the mark. Players have to point at the shooting range with one hand, and move the crosshairs around to eliminate the often moving targets. The range is see-through, so you can see your opponent's progress as well, and even steal their points (or they yours) for targets that peak above the range. So it makes the most sense to always shoot the above-range targets first, and then take your time with the rest. Because of the see-through surface, it can also be visually confusing to quickly identify which targets are yours as they all spawn together. Target Shooting is tiring because you simply point at Kinect for extended periods of time, with one hand, and move it around a little. It also runs into the most problems with tracking, as the peripheral is seemingly unable to keep the crosshairs accurate, and you watch it jitter and bounce around on screen even as your hand is motionless. It makes accurate shooting frustrating, given that the design calls for targets that make you lose points, or must be shot in specific sequence or timing.

Players can also activate a turret that will fire at their opponent, requiring them to lean out of the way. The power-ups here are blind fire, target bonus, and gun jammer. The latter two are probably the most useful in order to come out ahead. There are 5 ranges of varying difficulty to play through, but with the tiring body position, poor Kinect tracking combined with accuracy-demanding gameplay design, this is by far the least enjoyable game in the Rivals' arsenal. 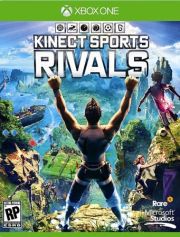