Does not reinvent the genre but minor gameplay changes go a long way in providing a great first person shooter experience.

A sequel to the 2003 game, Call of Duty 2 tells the story of three soldiers from different parts of the world – Russia, UK and US, fighting against the same enemy – Nazi Germany.

Call of Duty 2 takes the high standards higher. The campaign is more visceral and engaging. Although the core gameplay aspects remain the same, some minor changes go a long way in making the game more immersive. 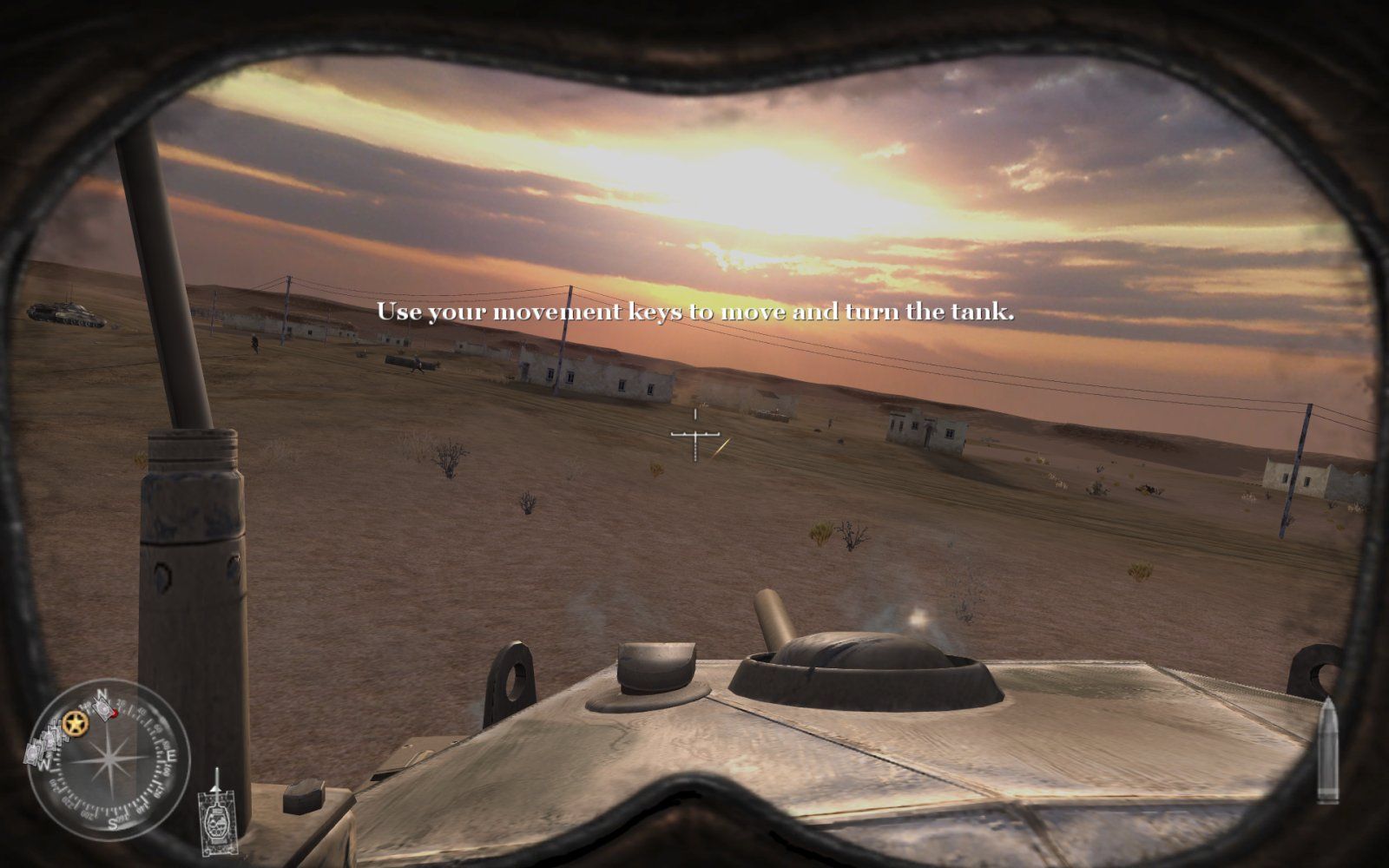 You are only a soldier in a group fighting against odds in the midst of heavy battle, there are no one man army missions, and you are always a part of a platoon. This gives you the feeling of being a small part in a great battle.

You begin your campaign in Russia as a private in the Russian army fighting to regain control of Stalingrad. Once you capture the city hall from German army, you move on to the British operation in Africa. You attack the Germans in tanks and race through the narrow streets of Tunisia in an armored car evading the Panzerfaust, and then a final mission in Amaye sur Seulles will see the end of the British campaign.

The American campaign begins in frenzy on the D-Day, not at the Omaha beach in Normandy (Medal of Honor: Allied Assault, remember?), but at the foot of steep cliffs of Pointe du Hoc in Normandy, France. You are a part of United States Army Ranger Assault Group in Operation Overlord. You have to scale the cliffs and gain the control of the 155mm guns. This for me was the best part of the game. It was truly epic.

The visuals and sound ensure that you are completely immersed in the game. At high settings the game looks amazing. Particle effects, explosions and rain have been greatly improved using the proprietary graphics engine. The game has native widescreen support, so there is no need to resort to user created patches. Character models look great, and the animations are very smooth. Soldiers don't appear to glide like they did in the previous game. 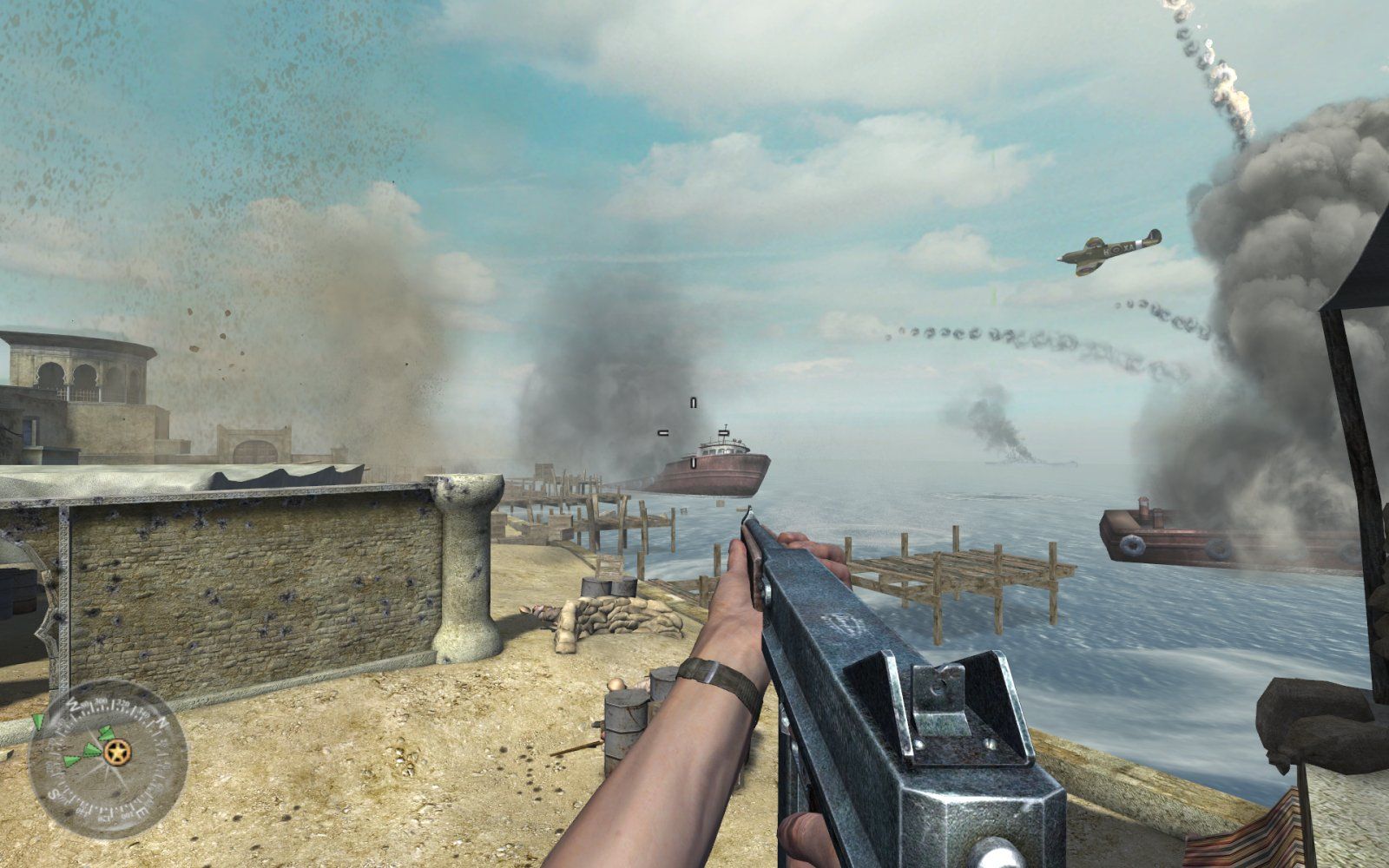 Level design is top notch. Environments in different parts of the world have been created with a great detail. The sand covered deserts in Libya and Egypt, icy streets of Russia and the ruined cities in France are outstanding.

Sound increases the intensity of the battle. The weapons sound really sharp and the score is very moving. You can hear soldiers screaming and taunting, and the sound of explosions create a great atmosphere. The Battle for Hill 400 level comes to mind; it begins with a battle cry and the allies charging to take on the Germans. The game puts you in a war movie.

Each level begins with real World War II footage and all the battles are factual. You get to read the diary entries of the character before each mission. It shows the work the developers put into the game to make it as real as possible.

Gameplay has received some minor tweaks. Unlike most other games, there is no concept of health packs. When you are hit by an enemy, your vision is blurred, and it turns red. You need to find cover quickly to recover. I was initially surprised and not sure if I liked it. After having played for a few minutes, I realized I didn't have to worry about getting health packs, and I could concentrate on the action instead.

The save mechanic in the game is different too. You don't ever have to save your game, the does this for you – it's a checkpoint system. When you start the game, you don't have to look through a save game menu, you just hit resume game and you are done. While I am not such a fan of not having Quick Save, I think in this game, it works perfectly, because there are no frustrating parts that would require you to play over and over. The pacing is just right.

I played the game on hard difficulty, and the enemy AI presents quite a challenge, so you don't ever want to rush into a fight. Instead you take cover, flank the enemy, use smoke grenades etc. The friendly AI is also very helpful and they often rescued me from tight spots.

Perhaps the only negative aspect that I can think of is the infinite soldier spawn. There are times when you have to advance in battle or else enemies keep spawning endlessly. You could be crouching behind a wall and kill hundreds of soldiers, and unless you move forward, they keep coming at you. This will not spoil your experience by a long way, but I expected something more than the age old infinite enemy spawn trick.

The campaign is about 15 hours long at Hard difficulty setting. This game deserves to be played by all FPS gamers. It is an amazing experience. 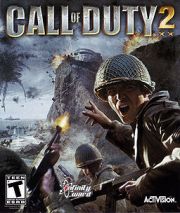 Our Review of Call of Duty 2
89%
Great
The Verdict:
"Does not reinvent the genre but minor gameplay changes go a long way in providing a great first person shooter experience."
Game Ranking
Call of Duty 2 is ranked #31 out of 1715 total reviewed games. It is currently our top ranked game released in 2005! (3 in total)
30. Super Mario Odyssey
Switch
31. Call of Duty 2