Need for Speed: The Movie Review

A race to a predictable finish

It’s been a long running experiment to create video games based on movie franchises. Although far from an assured success, the quality of the games has indeed been getting better. Not so the other way around. Movies based on video game property haven’t had much luck, and range from average to downright poor. It’s a tricky proposition, but it certainly hasn’t been for the lack of trying (and big plans to continue trying) by the movie studios. With that said, the Need for Speed movie enters theaters today. A racing franchise spanning 20 years and over 20 titles, having had its highs and lows, makes its debut on the big screen.

Taking the lead role is Aaron Paul (Breaking Bad) as Tobey Marshall, a mechanic who is skilled at racing cars. He is joined by his shop co-workers and friends Ramón Rodríguez (Battle: Los Angeles), Rami Malek (The Master), and Harrison Gilbertson (Beneath Hill 60) as Pete. The reason most characters’ names don’t immediately come to mind is because there is no time spent on introductions or development. Beyond their occasionally whacky behaviour, they are all easily interchangeable and the movie makes no attempt to present any unique qualities to the cast. 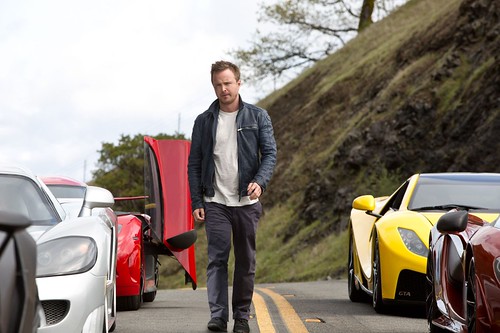 We learn that the car shop Tobey owns is struggling financially, so when Dino Brewster appears at the door, the crew accepts his offer to restore a car. Dino is played by Dominic Cooper (Abraham Lincoln: Vampire Hunter), a rich entrepreneur that also dabbles in racing but is mostly concerned with luxury car purchasing and restoration. There’s some troubled past between Dino and Tobey, who have both seemingly dated Dakota Johnson, but the idea of a big payday overwhelms any personal qualms. Harrison Gilbertson looks to be youngest of the group, and a very good personal friend to Tobey. So it’s no surprise that, after obvious over-acting as an innocent and happy-go-lucky guy, an unfortunate fate awaits him. This incident is what sends the rest of the film in motion.

Having casually spent two years in jail after being framed for Pete’s incident, Tobey is released with one goal in mind – to enter a high stakes race secretly hosted by Michael Keaton (Batman) as Monarch and defeat and potentially kill Dino as revenge. Julia Maddon played by Imogen Poots (28 Weeks Later) then enters the scene, and brings with her the 2013 Shelby GT500, the very same car that Tobey and Co rebuilt for Dino to sell. And thus the crew sets out on a cross-country trip from New York to California, where the race is taking place in less than 50 hours. The time deadline seems purely arbitrary; it gives the film a reason to have an awkward re-fuelling scene while driving to apparently save time, yet later stopping at a gas station is perfectly fine. As the pair crosses the country, they come across police and hostile drivers, but manage to escape in sometimes extraordinary fashion. It sounds a bit similar to Need for Speed: The Run from a few years back, but there’s no resemblance to that game. 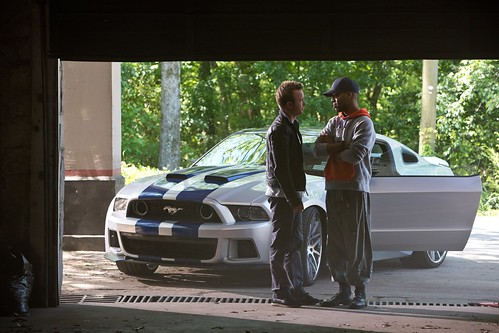 Aaron Paul tries to hold up the film on his own as the lead dramatic actor and gets the most screen time. He’s good, but this isn’t the movie that will prove him to be a worthy leading man. Dominic Cooper is barely on screen and is nothing more than a typical villian that has glaring problems with logic which eventually lead to his downfall. Imogen Poots is the love interest, whose defining feature is a silly fear of heights, that eventually becomes a damsel in distress when the time is right to motivate Tobey. She doesn’t have much chemistry with Aaron Paul to make the romantic scenes believable, not to mention the formulaic situations and dialog between them that viewers must endure. Ramón Rodríguez plays a serious guy, Rami Malek a crazy guy, and Michael Keaton is just adequate as the slightly crazed man behind the big race. Kid Cudi is also Tobey’s friend who’s only apparent job is to secure a view from above and crack jokes. It’s a rapper offering comedic relief; far from being original, but at least it works.

Perhaps everyone is limited by the script, which is as safe and predictable as they come, penned by George Gatins. Given that the game franchise doesn’t have many storylines to offer, the creators were free to come up with their own setting and ideas. Sadly, the end result is hardly memorable. There aren’t any twists, the characters are straightforward, and you can tell the film is ticking stereotypical checkboxes as it goes along. For a movie about cars and racing, there’s seemingly too little time actually spent in a heated chase. Most of the action pans out without any real indications of imminent danger, so you’re not exactly on the edge of your seat.

The film keeps the actual racing strictly in realistic territory, unlike the physics-defying silliness that has been plaguing the Fast and Furious franchise lately. Using practical effects lets the film stay grounded, and means the cast actually had to pull off some of their own driving stunts. There are no physical action scenes that involve the actors themselves, nor does the raunchy street racing culture make an appearance, helping this film differentiate itself a bit.

Another big point is the car selection – as the NFS game franchise has always been all about the supercars, the film attempts to focus on that as well. Rare cars like Lamborghini Sesto Elemento, Bugatti Veyron, Koenigsegg Agera R and more make appearances. Sadly, there’s not enough screen time for these beauties, and we spent most of our time with the Shelby GT500, which at certain scenes sounds like a commercial for Ford. The movie would have greatly benefited from more screen presence for the supercars, because overall it doesn’t offer enough racing variety to satisfy. The focus on plot and characters far outweighs any car-centric content, making this a passable revenge story that just happens to feature supercars, instead of the other way around.

Need for Speed is directed by Scott Waugh, with cinematography by Shane Hurlbut and music by Nathan Furst. The three are re-uniting after 2012’s Act of Valor. Waugh and Hurlbut manage to make the action easy to follow by keeping the cameras steady and avoiding the overuse of quick cuts. However Need for Speed was converted to 3D in post-production, but as is usually the case in such situations it hardly adds anything to the film, and only needlessly blurs some of the details that the director worked hard to showcase. To appeal to the fans of the game, and using techniques also seen in Act of Valor, the film has many shots from first-person view of Tobey. The racing takes place in a variety of classic environments also from the games – urban locations, Grand Canyon’s desert, and a forested area in California. The sound production from Furst is, sadly, as forgettable as the script; revving up a beat during the racing and tugging at strings during the heartfelt moments.

As a movie adaptation of Need for Speed, the film doesn’t offer enough screen time to the supercars. As an adaptation of a video game, it’s passable but should have been better given that there was no requirement to adapt an existing story or characters. And as a standalone film, it’s disappointingly predictable and cliché. Need for Speed could have been worse, but it could also be so much better. 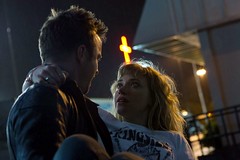 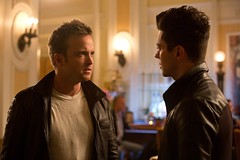