Of course, just because you did manage to sneak across to the solitary patch of shadow in the room while walking across a floor made from bubble wrap and Rice Krispies doesn't mean that you're necessarily safe in Thief. Having a big luxurious budget and the wonders of modern graphical technology evidently went to somebody's head because everything Garrett does has a lovely little pre-animated action for it, and the dormant issues that result from this soon raise their ugly heads. Say I'm crouched in the shadow of a big oak desk when I spot a drawer on it I'd like to worm my fingers into. Garrett can't just silently slip the drawer open from his current position, or even reach around the corner and fumble with it. Instead, he has to slip out of his safe location, stand up, position himself directly in front of the drawer (no matter how many spotlights, security cameras, crossbows and orbital laser cannons might be trained upon it) and open it up, taking great care to show his hands delicately slipping it open. This applies to everything, even causing you to lean forward momentarily when you reach out to grab minor bits of loot, and I honestly cannot think of a single good reason for this feature to exist. It breaks the flow of literally every minor action in the game, it takes control away from the player, and for what? So we can see Garrett's spidery hands greedily grabbing everything we rub our 'use' button on with those glistening next-gen graphics? It's alright Eidos Montreal, I won't lose my immersion just because I can't actually watch myself stuffing all that pricey dinnerware into a sack. Brains can fill in the blanks for that sort of thing just fine. It's not game-breaking, but it's just another annoyance that I couldn't let slide, especially given how indicative it is of Thief's dictatorial tendencies. 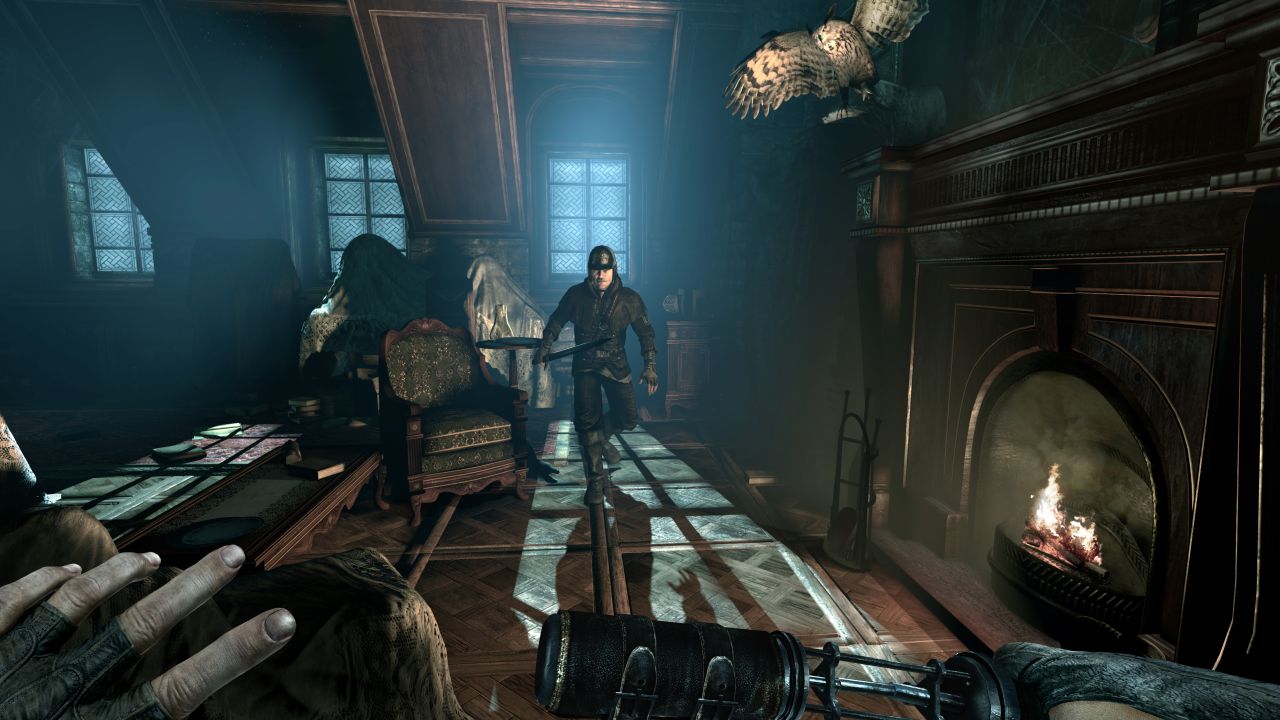 Now, here's a quick spot test for those of you out there with Garrett figurines sitting proudly on your bedside tables. I want you to find a scrap of paper on your desk – I don't know, tear out the back page of your Game of Thrones book or something – and write down the best features, in your opinion, of the Thief games. Finished? Right, did you write 'enormous sprawling non-linear levels' in spiky block capitals? Because Eidos Montreal, for whatever mind-melting reason, didn't. Levels range from slightly disappointing to positively titchy and often consist of little more than a set of small arenas set up in linear succession, a problem that Thief shares with its predecessor, Deadly Shadows. There's nothing that comes even close to the expansive indulgence of something like the Shoalsgate Station or First City Bank missions from Thief II (whatever your precious pre-order bonus blurb might have told you) and while there are quite a few levels with a genuinely non-linear structure, they usually only have a handful of viable paths throughout them, a number of which will swiftly disappear if you didn't bring the bloody wrench along. One could argue that this decision was done in order to provide a tighter storytelling focus, but since we have already established that the story is pants, this is something of a lost cause.

Also back from Deadly Shadows are side-missions and the ability to freely roam the City, the latter of which was probably the peak of this game for me as far as entertainment is concerned. Exploring the streets, dodging patrols of watchmen and climbing into upstairs windows provides a nice homogeneous layer of solid burglary to fill the gaps between missions and grant you a little bit of extra gold on the side. But there's very little tension or sense of any kind of threat about it: guards are rare, citizens won't tattle on you unless you look at them too menacingly, and even if you end up with half the district in hot pursuit of you, there are any number of easy viable escape routes at your disposal. I was going to make a joke about how you could probably evade your foes just by running very quickly in a straight line, but unfortunately that doesn't really work because the City has been designed in the haphazard grand tradition of sprawling pre-industrial cities, and is therefore incredibly unintuitive to navigate when one has a specific destination in mind. The poorly-disguised loading zones don't help either. 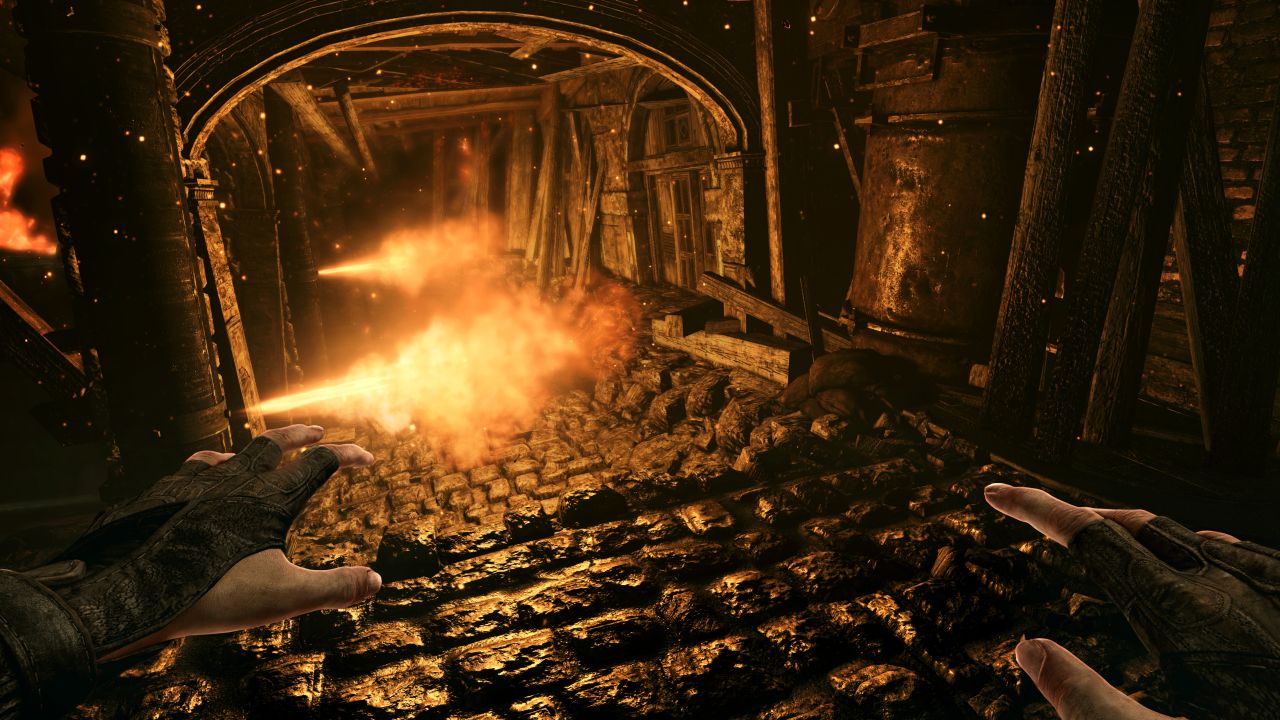 This might seem like an odd point to make, but there's something really strange going on with Thief's sound design, in that the apparent volume and clarity of a sound often seems completely arbitrary. Several times I was startled by somebody speaking into my ear only to find, after some investigation, that they were actually on the far side of a brick wall, or taped into a dustbin, or in another postcode. Occasionally I would make a noise that was almost inaudible to me – missing a tumbler on a lock, for example – only to find that I had inadvertently telegrammed my exact position to every guard within a six mile radius, while in other situations I was practically setting off fireworks behind their backs with no response. Once I accidentally slipped off a rooftop – mostly because the contextual jump command was feeling spiteful and decided to try to kill me again – and I swear I landed right behind a watchman, close enough to count the plague boils on the back of his neck, without alerting him. Now, I don't know about you, but I don't see how it's possible to accidentally fall off a building without making a few noises, and probably some smells too. I suppose it's possible that he had been suddenly assaulted by an audio cue, because for some inane reason the default ambient music volume is loud enough to drown out all but the most stubbornly projected of dialogue lines.

Maybe if that had been the limit of Thief's technical problems, it could have still gotten out of here with the smallest, most disgruntled of non-committal recommendations, but fate – or rather, Thief's QA program – has decreed otherwise. How petty and entitled it seems to complain about the relative volume of dialogue when entire lines of it start to disappear into the ether, or when the cutscenes that house it start to fluctuate in speed like a malfunctioning electric wheelchair. The framerate remained buoyantly above sixty for the most part, sailing high and dry on the black monolithic PC from which I extract all my earthly gratification, but tragedy would occasionally strike in the form of crippling, post-loading-screen slowdowns. Merely entering several select areas was enough to do to that comfortably high framerate what a swimming pool full of gravel does to a runaway lorry. I know hyperbole is loads of fun when we're talking about this sort of thing, but I really did have the time to get up, walk away, and make a cup of tea while I waited for Thief to finish whatever agonizing piece of long division had caused it to grind to a halt. As a matter of fact – given that this game will easily stretch to fourteen hours even if you pay minimal attention to all the side-missions, and probably double that otherwise – that was usually exactly what I did. You don't even want to know what I ended up drinking when the game decided to nuke my save file about three hours in and forced me to start over.

The standard route with disappointing reboots like this is usually to say something along the lines of “If this had been released under a new IP instead of polluting an old beloved one, I would have liked it”, but that really isn't the case with Thief. Being in the unfortunate position of having to be compared to its predecessors certainly didn't do Thief any favours, but even as a standalone game it flops. The movement system is frustratingly restrictive, the levels are small and often entirely linear, the story feels clumsily stitched-together, and when all's said and done it's all just a bit lacking in polish. How truly saddening to see the reboot of a genre-defining game fail to grasp its strengths even while its competitors – Dishonored, even Eldritch I'd be willing to argue – expand on them. Thief's only concession to expansion is that it is bloated well beyond the bounds of reason.

Prev123
Our ratings for Thief on PC out of 100 (Ratings FAQ)
Presentation
71
The limited colour palette, while not especially engaging to look at, suits the game's gritty, moody atmosphere, and is compensated somewhat by the impressive level of polish that's gone into the visuals. Voice acting isn't half-bad either, even with the departure of Garrett's usual actor.
Gameplay
55
Stiff, inorganic, and burdened by some truly underwhelming level design. Generally a mockery of the greatest positive features of the Thief series. The least you can say is that it's functional.
Single Player
62
A decent-length with plenty of side-missions and other features to keep a dedicated player occupied, but the plot and characters leave a lot to be desired. I suppose you could do a lot worse when dealing with videogame storytelling, but what kind of an excuse is that?
Multiplayer
NR
None
Performance
(Show PC Specs)
CPU: Intel i7-870 @ 2.93 GHz
GPU: Nvidia GeForce GTX 760
RAM: 8GB DDR3
OS: Windows 7 Premium 64-bit

44
Sound bugs, dodgy cutscenes, optimisation issues and magical vanishing save files only serve to apply another layer of grime to an already-disappointing game.
Overall
51
A poorly-designed outing that might, in another continuity where the previous Thief games never existed, have earned itself the heady accolade of 'barely average'. Unfortunately, we all know that it could be - and has been done - so much better.