Even putting the similarities to Dishonored – and the complete obliteration of the colourful array of factions that once fought over the City – out of the way, Thief's writing isn't anything particularly compelling. Finding out what happened to Erin – a character who, may I remind you, stays in your company just long enough to get annoying before tragedy strikes – is Garrett's main motivation throughout most of the plot, so the game essentially says “Hey, look at this impulsive, arrogant, morally-bankrupt fool who single-handedly fumbled a heist and nearly got you killed. Now, empathise with her!” Maybe I could have done so, via the extensive and somewhat overwrought character development sequences that she gets throughout the game, if the second half of Thief hadn't gradually drifted off the track of reason and off into a foul-smelling ditch somewhere. From a relatively stable standpoint, the story slowly descends into a pudgy miasma of inexplicable twists, questionable motivations and plot holes that not even the increased reliance on supernatural elements can fill, culminating in a lackluster ending with so many loose ends and unanswered questions that you can almost see the inevitable DLC storylines falling into place. There's a bit more of a focus on horror this time around, and even a surprisingly unnerving level set in a recently-vacated insane asylum, but while I'm happy to see any game that understands that there's more to horror than just carving up fleshy monstrosities with a chainsaw strapped to each extremity, all it really does is get in the way of the meat of the game: good honest thieving.

Gameplay is where the most innovation has been made, for want of a more appropriate word. As expected, there are a bunch of modern amenities that do their best to give new players a warm motherly hug, just in case the prospect of an unfamiliar IP with alien gameplay scares them off – a minimap, objective markers, alert indicators, a button that essentially combines bullet time with Batman's detective vision. To their credit, Eidos Montreal do grant you the option to turn all of that off, which I leapt at the chance to, although the exclusion of that last feature became something of a problem when the game started throwing in some of those classic 'find the hidden button' puzzles. Basic mechanics have been streamlined quite a bit, removing the sword, relegating the blackjack to a dedicated melee button and essentially eliminating the inventory, all of which make the game a lot less clunky if a bit on the easy side. There's a swoop move that allows you to quickly and quietly dash short distances – again, not helping against the case that the 2014 Thief is a great deal more forgiving than its forebears – and there are a few really clever little touches that genuinely do add to the game, like being able to lean over railings without actually having to leap astride them like a hyperactive circus performer, or having to watch that you don't knock fragile objects to the floor and make a resulting racket, or the way guards will now actually notice when the room they were patrolling in suddenly contains less gold than a litre of seawater. It's also pleasing to see that Thief hasn't caved to the increasingly common trend of tacking token RPG elements onto everything, though there are other issues in that vein that we'll get to in due time. 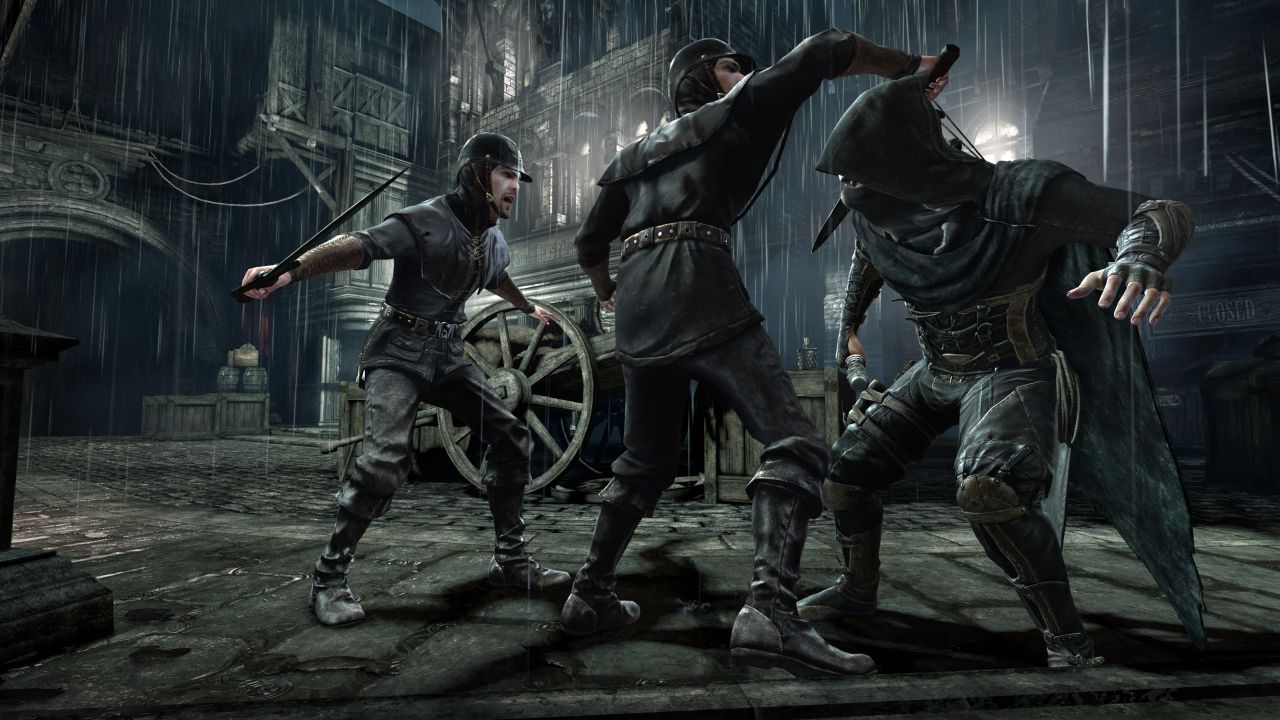 That's about the end of the praise, sadly. One of the optional gameplay features that I found myself unable to do without was the contextual button indicators, because Thief is a game that's practically built around them. Now, contextual button functions are sort of an understandable feature in some games, especially when you've run out of buttons and there's no reason to expect that the character will simultaneously need to quick-fire their lightning spell and seduce a nearby NPC, but Thief's approach is both offensively restrictive and downright badly designed. You can't jump or mantle at all, you see, unless you're positioned in front of a ledge, or a perfectly proportioned obstacle, or a gap that was specifically intended to be jumped. Presumably this was an attempt to remove the nightmarish task in the earlier games of having to perfectly execute parkour jumps while under the influence of those tricky Dark engine movement physics – which were like walking everywhere with your feet trapped in lumps of freshly-kneaded dough – but removing the task altogether just smacks of somebody giving up far too early. What's the point of even having something like this in the game if it's been made impossible to fail? There's no challenge involved, that's for certain, unless you count working out what the game will and won't count as a jump cue. So I suppose it is possible to fail: all you have to do is try to do something that the developers didn't think of, or just plain didn't want you to do.

Want to jump from rooftop to rooftop at a non-standard angle? Don't bother, the game will assume you just wanted to jump off the building. Want to jump over that patch of broken glass? Not allowed, I'm afraid, unless you want to make it sound like there was a catastrophic accident at the bottle recycling plant. You shall have to find a way around. Want to clamber over this stack of crates? Sorry, those crates don't conform to regulation dimensions, so I'm afraid all you can do is bump into them like an angry steampunk vacuum robot. And worst of all, Thief doesn't even make the effort to stay consistent. Do you want to know the difference between an edge you can clumsily walk straight off, an edge that you have to manually drop off with a contextual button press, and an edge where your only option is to stand there like a lemon, cursing the person who invented the invisible wall? Well so would I, because it's certainly not apparent to the naked eye. 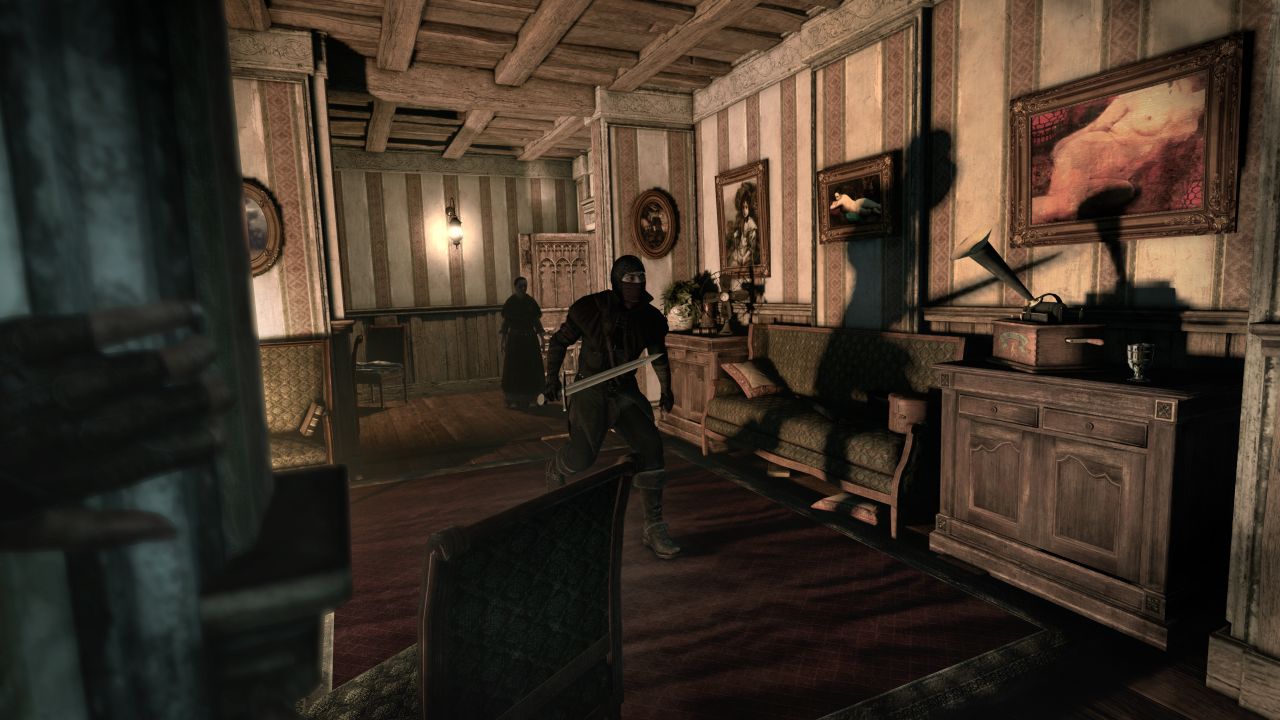 My hopes were buoyed, however briefly, by the acquisition of a grappling gizmo early in the game, but it shares the same contextual problem as the jump button in that it can only ever be used in specific spots to scale specific obstacles – in this case, directly in front of metal grates and out-of-reach ladders, both gifted with a tendency to glow blue because otherwise you'd never spot them with Thief's environmental colour palette of grey, brown and another grey – and the occasional linear scripted climbing segment. It's all so woefully inorganic, so relentlessly over-designed that there's no room for the player to innovate or pull things off that the development team hadn't anticipated. I mean honestly, it's a grappling hook for all intents and purposes. Why would you take a great concept like that and drag it down until it just becomes a method for scaling certain segments of walls that are about a meter taller than the others?

The grapple is just one of a few new items that Garrett gets to play with, but the only one he gets for free. The rest must be bought from a sketchy merchant for not-inconsiderable sums of gold, along with various upgrades for your bow and other equipment and... hang on, hand me that butterfly net. I think I've found the token RPG elements.

No, really. You can swap out the experience points for gold but the fact remains that you are being offered a set of permanent upgrades to central parts of Garrett's kit with the option to specialise in whatever you feel makes the most of your playing style, which to me paints 'token RPG elements' across the bathroom wall in dripping red letters. This argument is backed up by the little evaluation screen at the end of every mission, which will grant you bonus gold for things like not being seen – because that makes complete sense – and the inclusion of some side-questing nonsense which lets you upgrade your Garrett-vision. It's a great deal more convoluted than just earning experience points and spending them accordingly, but the principle is the same. Purchasing these new tools becomes your main incentive to steal as much gold as possible – well, that and ammunition for your bow, but that really isn't a problem unless you're on the highest difficulty – because without it you quickly find your options becoming increasingly limited. Without the wrench you can't open vents or steal plaques, without the wire-cutters you can't disable traps, without the razor you can't cut out paintings or shave your chin, and so on. Can't this, can't that. Why are you erecting all these pointless barriers in my way, Thief? Why would you want to actively detract from the experience until I've jumped through these hoops? And really, a wrench? Did Garrett, a man capable of carrying an entire solid-gold cutlery set on his back without expelling a single grunt of complaint, really think that in the course of his work it would never benefit him to bring such a basic tool along? It's infinitely more useful than that silly compound bow, at any rate, especially since you can put out candles just by idly wafting you hands over them.

Garrett has also apparently swapped out his tap-dancing boots for a set of nice comfortable slippers, greatly increasing the speed at which he can move across various surfaces without alerting anybody, and am I the only person who feels that this is a massive step backwards? Yes, it was kind of unrealistic that you couldn't run across a tiled room without bringing every single person in the building down on you, but it added a whole extra dimension to the levels and how you approached them. You had to look at a room and weigh up the various combinations of light and floor surfaces to work out how you tackled it. Is it worth the risk of crawling across that metal grate and potentially alerting a nearby guard? What areas can I safely move around in if something comes patrolling through here? Now practically all you have to worry about is your light gem and the occasional obvious patch of water or broken glass, and it really removes a lot of depth from the gameplay, to say nothing of the effective tension of trying to creep behind somebody's back and praying they don't hear you. When you can run across a marble lobby in a Thief game without any fear of reprieve, it's hard not to smell a big rotten over-simplifying rat.